Victory of the body and mind

Before traveling the 8 000 kilometres of the Pacific Ocean from Lima (Peru) to Moorea (French Polynesia) in January 2023, the six waterwomen of Cap Optimist carried out a life-size test early June from Monaco to Athens in 13 days. A performance admired by all.

1 800 kilometres, 360 hours non-stop, day and night, in calm or windy weather, by sheer force of arms and spirit. These numbers are incredible. But, in the end, they only tell a tiny part of what Stéphanie Geyer-Barneix, Alexandra Lux, Itziar Abascal, Emmanuelle Bescheron, Margot Calvet and Marie Goyeneche experienced. The six waterwomen of Cap Optimist specialised in coastal rescue, decided to link Monaco to Greece in record time on prone paddleboard, a board about 3 metres long and 80 centimetres wide on which they took turns, accompanied by an assistance catamaran and a crew of five. They left the Yacht Club de Monaco on June 5th and arrived 13 days later to the cheers of fans in Piraeus port of Athens. “We were very happy to arrive in Greece,” confirmed Stéphanie Geyer-Barneix. “This crossing was very important, because it allowed us to raise funds for the Princess Charlene Foundation and Elpida, a Greek association that helps children with cancer”. The craziest thing about this charity adventure, sponsored by the Hellenic Community of Monaco is that it was only a test run before an even more spectacular and perilous project, scheduled for January 2023: crossing the Pacific Ocean and the 8 000 kilometres separating Lima, the Peruvian capital, to the island of Moorea in French Polynesia.

Stéphanie Geyer-Barneix has faced many challenges. Oceans, too. World champion in coastal rescue in 2000, the team leader is not one to be impressed. At 47, she has beaten four cancers. And that is not the reason for her presence in the Guinness World Records. Together with Alexandra Lux and Flora Manciet, she confronted the North Atlantic in 2009, traveling from Canada to France in 54 days (4 830 km), right after she was diagnosed with her second cancer. The epitome of determination. So, it was not surprising to see her relaxed before the departure on June 5th. Princess Charlene Foundation’s Riviera Water Bike Challenge had just come to an end. The crowd was gathering on Quai Louis-II to attend the other highlight of the day. Patron of the expedition, Prince Albert II, accompanied by his children Hereditary Prince Jacques and Princess Gabriella, exchanged a few words with the waterwomen. Together they attended the blessing of the crossing.

The following goodbyes were heartbreaking. Three out of the six waterwomens are mothers. In the background, Emmanuelle Bescheron was holding her two-month-old daughter Lucie. “Before leaving, I felt guilty. I talked a lot with the family, the father, to organise my absence as well as possible. I didn’t want the separation to be brutal”, said the founder of Ocean Incentive, a water sports concept for everyone. Away from her baby, the first thrust into the water were complicated. The relays also suffered a few twists, like when the assistance kayak flipped over prompting a small rescue mission. After the efforts on the water, Emmanuelle Bescheron was back on the catamaran to express her milk. A super-mom. These sequences of life were shared by the youngest members of the expedition. At 24 and 22 y.o., Margot Calvet and Marie Goyeneche discovered this world made of swells and waves, sunrises and sunsets, changing weathers, treacherous currents, epic conditions, races with dolphins, headwinds and capricious telephone networks. “This is another rhythm. You don’t sleep much, there is no contact with the outside world,” said the youngest, who had an unexpected encounter with a shark off Italy. Yet, solitude can be good. “I found out I was capable of great things. I can adapt to different situations and environments. It made me grow up very quickly.” Marie Goyeneche drifted on the lessons learned: “Before January 2023, I still need to work on the mental, even if I did not lose it during these 13 days. We will be cut off from the world for 90 days. But what is it in a lifetime? Nothing! I’m not going to die from it. To help, I can surpass myself.”

That will be necessary in the great Pacific. Monaco-Athens already required a permanent adaptation. Landslides forced the mythical Corinth Canal to close. Change of plan. Another boat was booked. The luggage and the team transferred. “In this type of expedition, plan A often gives way to plan B, C, D or even E.” The waterwomen have listed 90 points to improve before the Pacific crossing. They will have to review the food supplies on board to have more fresh products, even if it means carrying freezers. And anticipate the board changes to maintain stability when the elements are raging. Emergency protocols and rescue exercises were also reviewed.As the project leader explained, this expedition was a “life-saving general rehearsal” until its arrival in Athens, attended by the families. The six adventurers enjoyed a nice party organized in their honour at the Yacht Club of Greece in Athens, where they learned they had raised €130 000. After a well-deserved rest, a busy schedule awaited them. “Late September, we should do a cohesion and survival course with Mike Horn’s daughters. We are also continuing our preparation at the CERS Capbreton”, continues Stéphanie Geyer-Barneix. Then, the time will come to head for Peru and attempt a new record, this time to help Hope Team East, an association that helps people suffering from cancer and chronic illnesses through sporting activities. Crossing the Pacific on a paddleboard has never been attempted before. It should last 90 days, non-stop. “The cohesion and optimism of the group are our greatest strengths,” concluded Emmanuelle Bescheron. “We will arrive in Lima motivated, ready to face the challenge and the separation from our families. I hope we will reach Moorea by the 6th of April.” A special day: her little Lucie will blow out her first candle

They were in Piraeus on June 18th to welcome the waterwomen under thunderous applause. Sophia and Konstantinos Tsouvelekakis, bosses of Brooks Brothers Monaco, were sponsors of this expedition. Sophia explains the reasons why.

Konstantinos Tsouvelekakis and his wife Sophia (in the center of the photo), President of the Hellenic Community of Monaco, are an integral part of the project. The couple were behind the dinner conference organised last March at the Yacht Club de Monaco in presence of Prince Albert II, during which the waterwomen presented their adventures on the Mediterranean and Pacific. They are also early supporters of the project led by Stéphanie Geyer-Barneix.

What prompted you to sponsor this crossing?

It’s the aim of this challenge. Achieving such a feat for the Princess Charlene Foundation and Elpida, a Greek association that helps children with cancer, is a very nice gesture from these brave women. It is a philanthropic gesture. We met Stéphanie Geyer-Barneix during a summer evening of 2020 at the Princely Palace. We were invited to celebrate the arrival of Princess Charlene and the athletes involved in the Calvi-Monaco crossing. We were at the same table. Safia El Malqui introduced us and suggested to organise a joint event between Monaco and Greece. Stephanie immediately agreed, evoking a training test for her challenge in the Pacific. Prince Albert II gave us his consent. The adventure began.

What does this type of challenge inspire you?

A lot of admiration. In the eyes of the six waterwomen, this crossing was just a warm-up for the Pacific. Crossing the Mediterranean on a paddle seems crazy. But three of these women have already faced the Atlantic in 2009! And I can’t find the words to describe their project for 2023. Especially after Stephanie’s cancers. Others would have been devastated, but this serious illness has given her an amazing courage, strength and a smile. She is not the only one in the group to give life lessons. Emmanuelle became a mother two months before the event. Congratulations to her and her husband who supported her! These women set quite an example. Adrenalin is the best elixir. Congratulations to them! 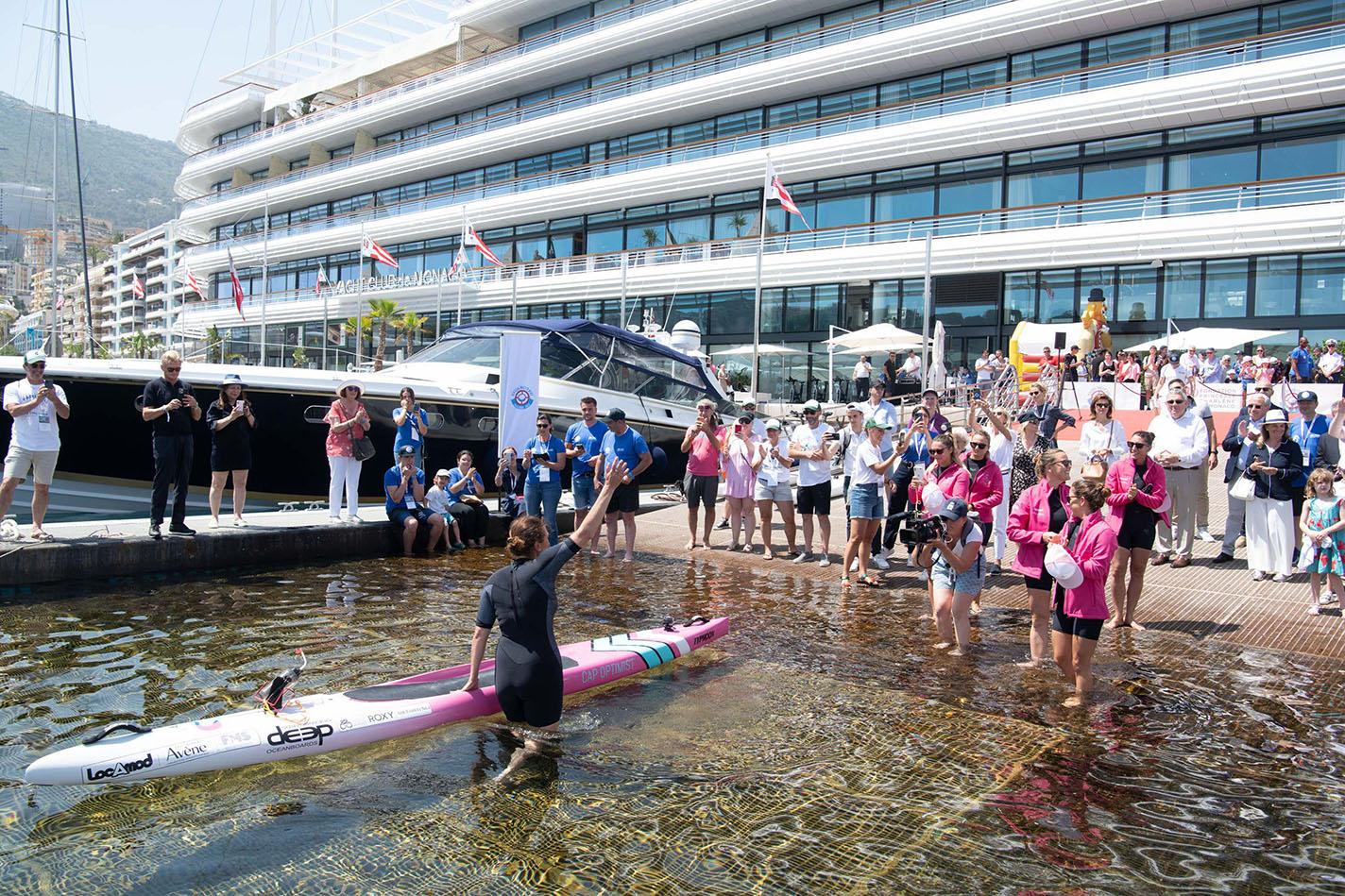 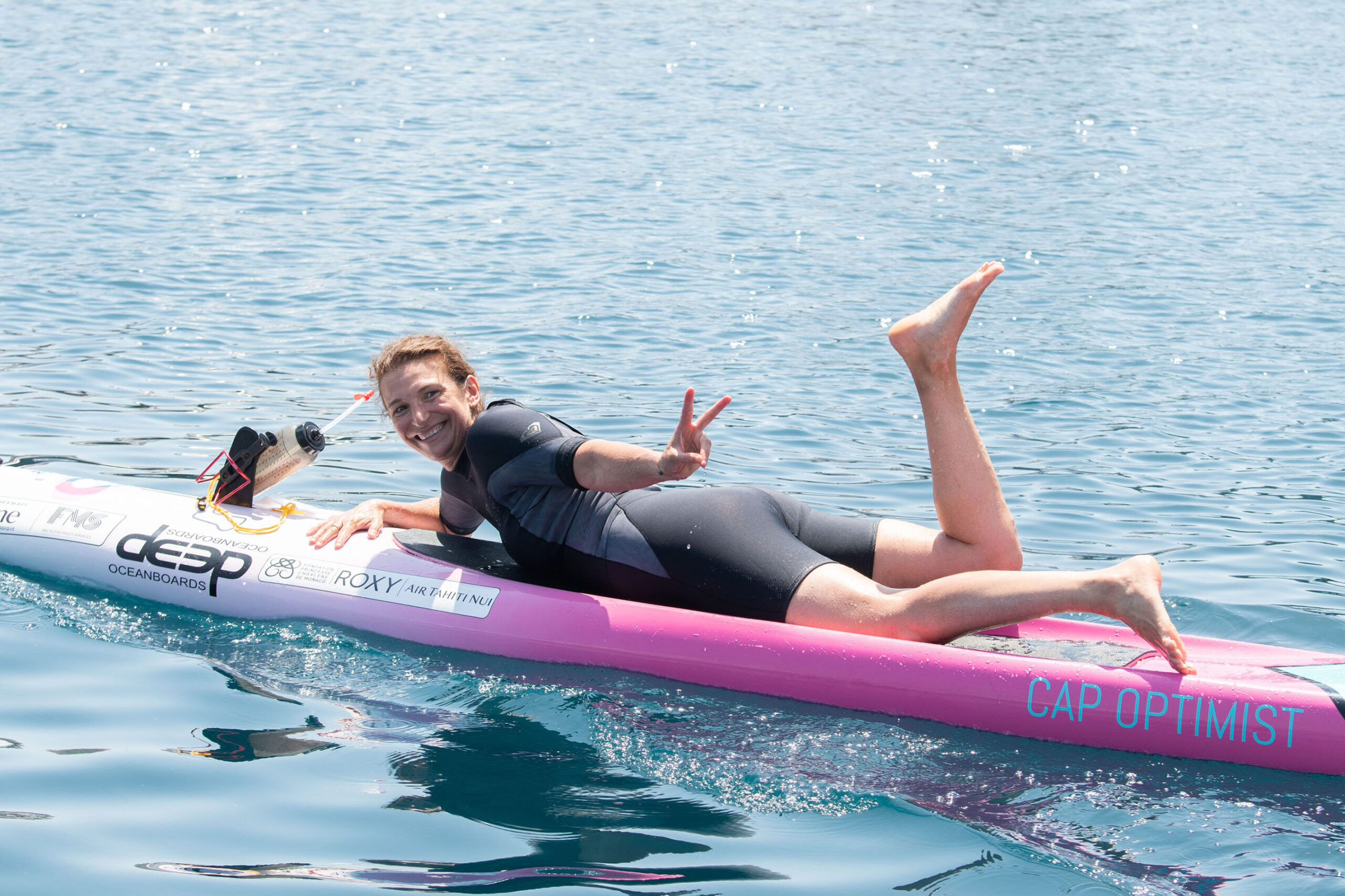 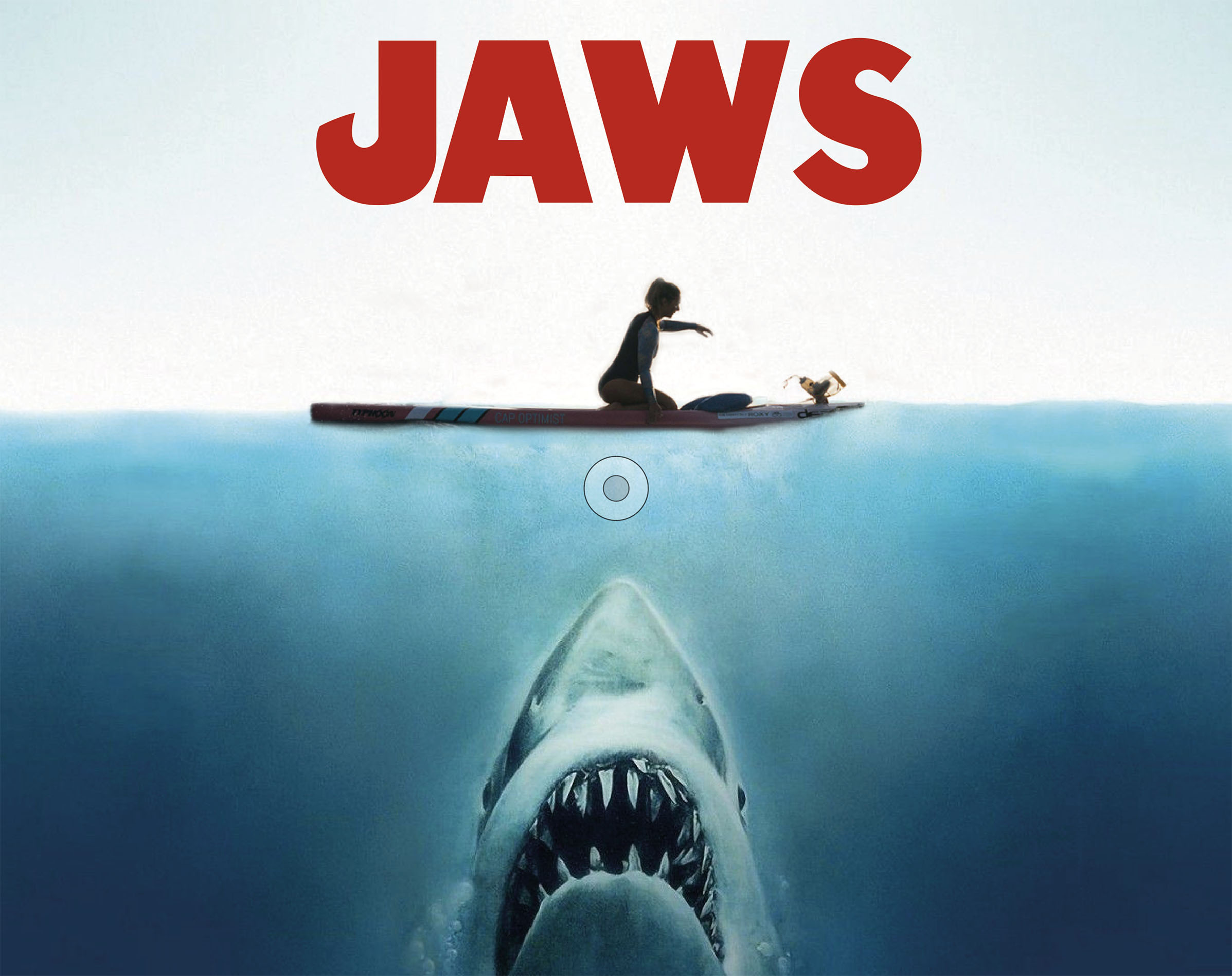 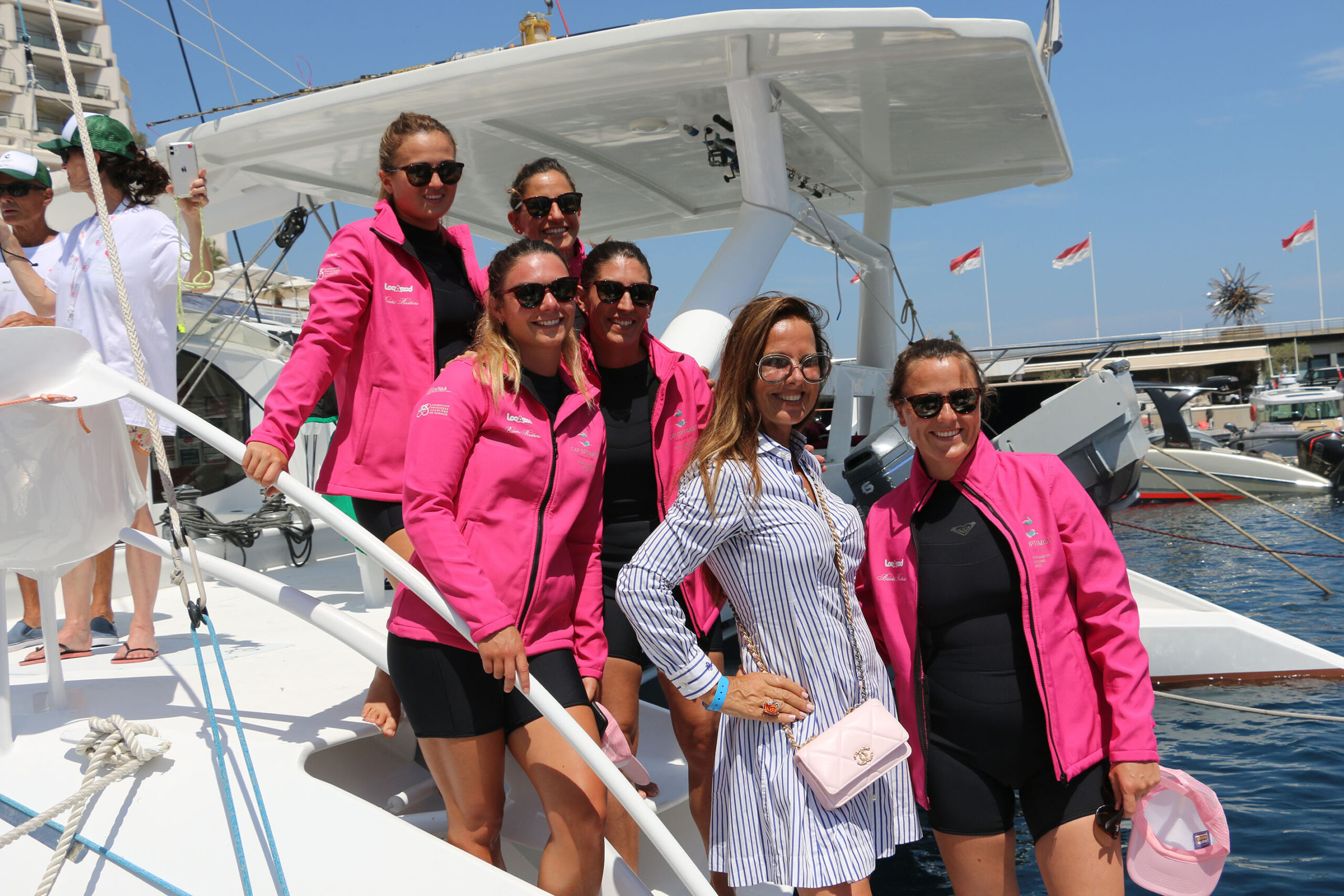 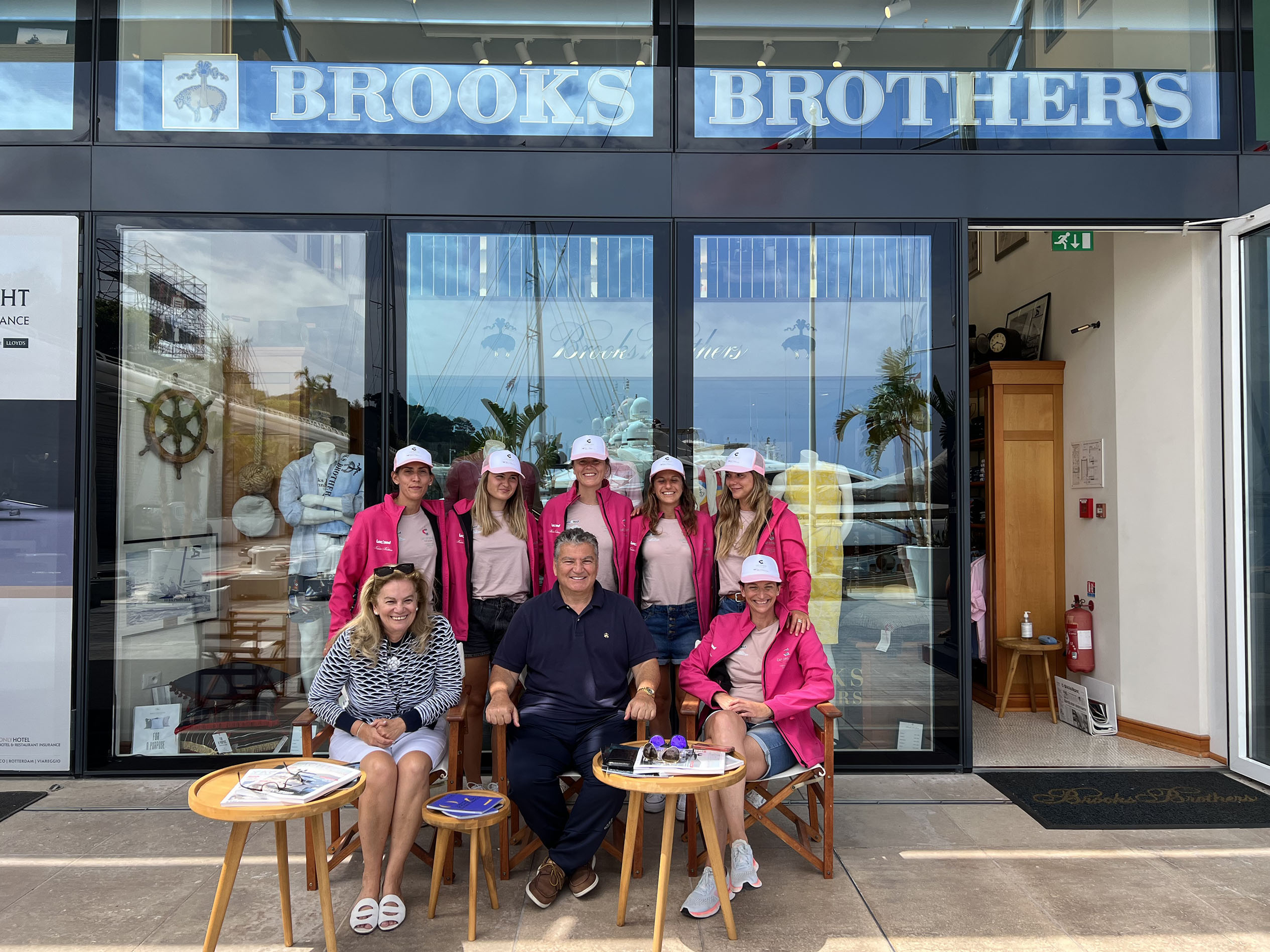 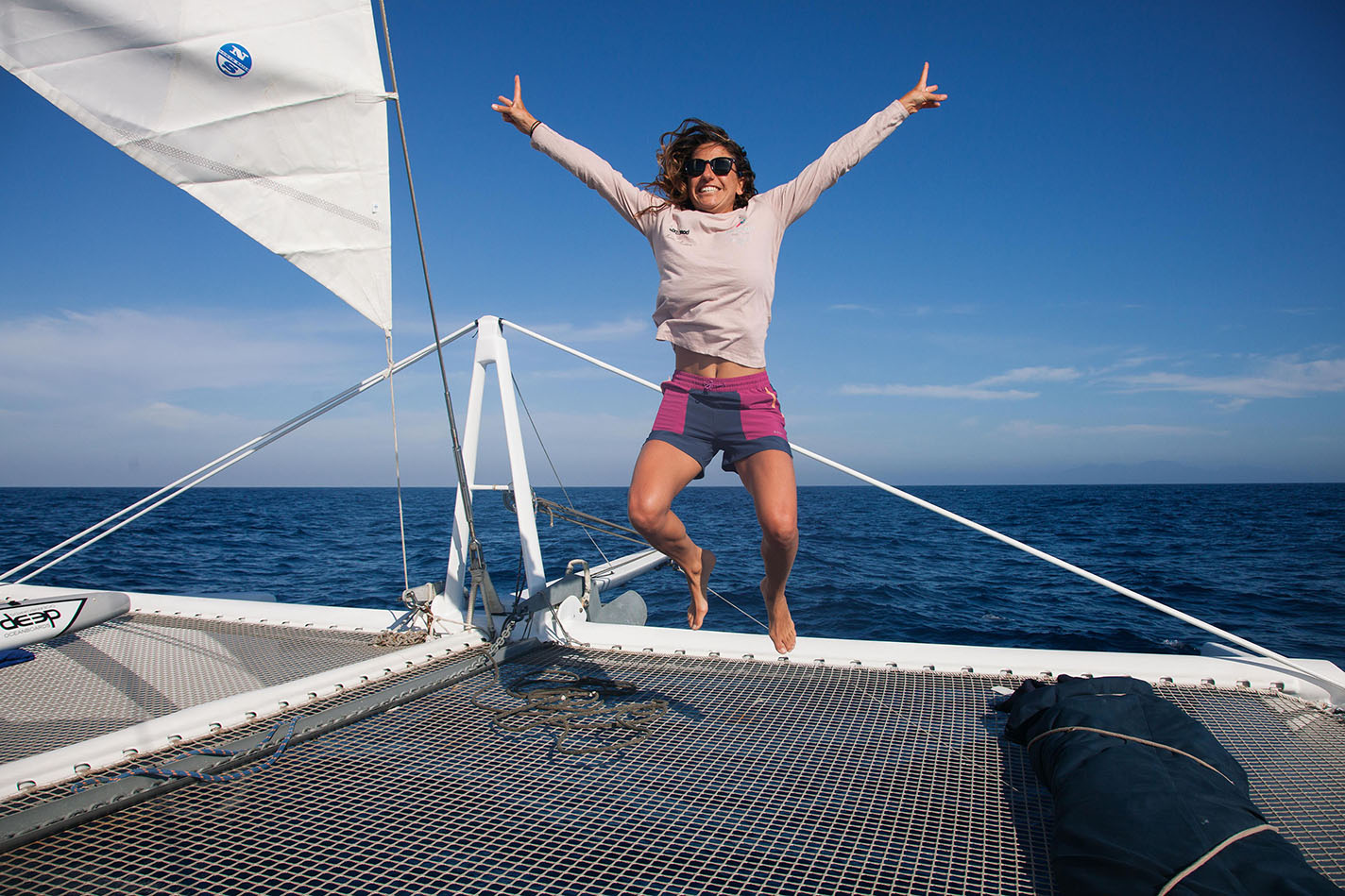 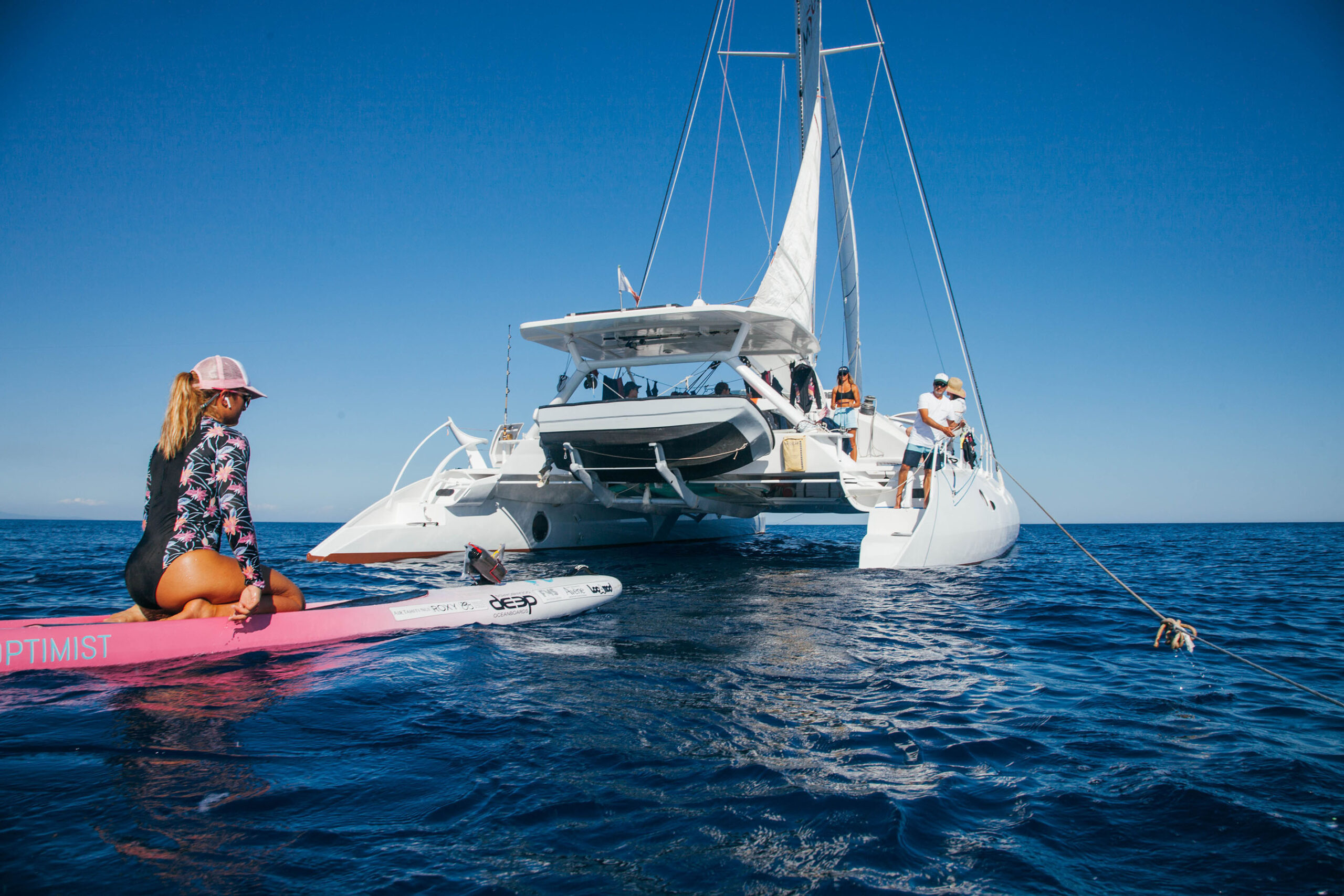 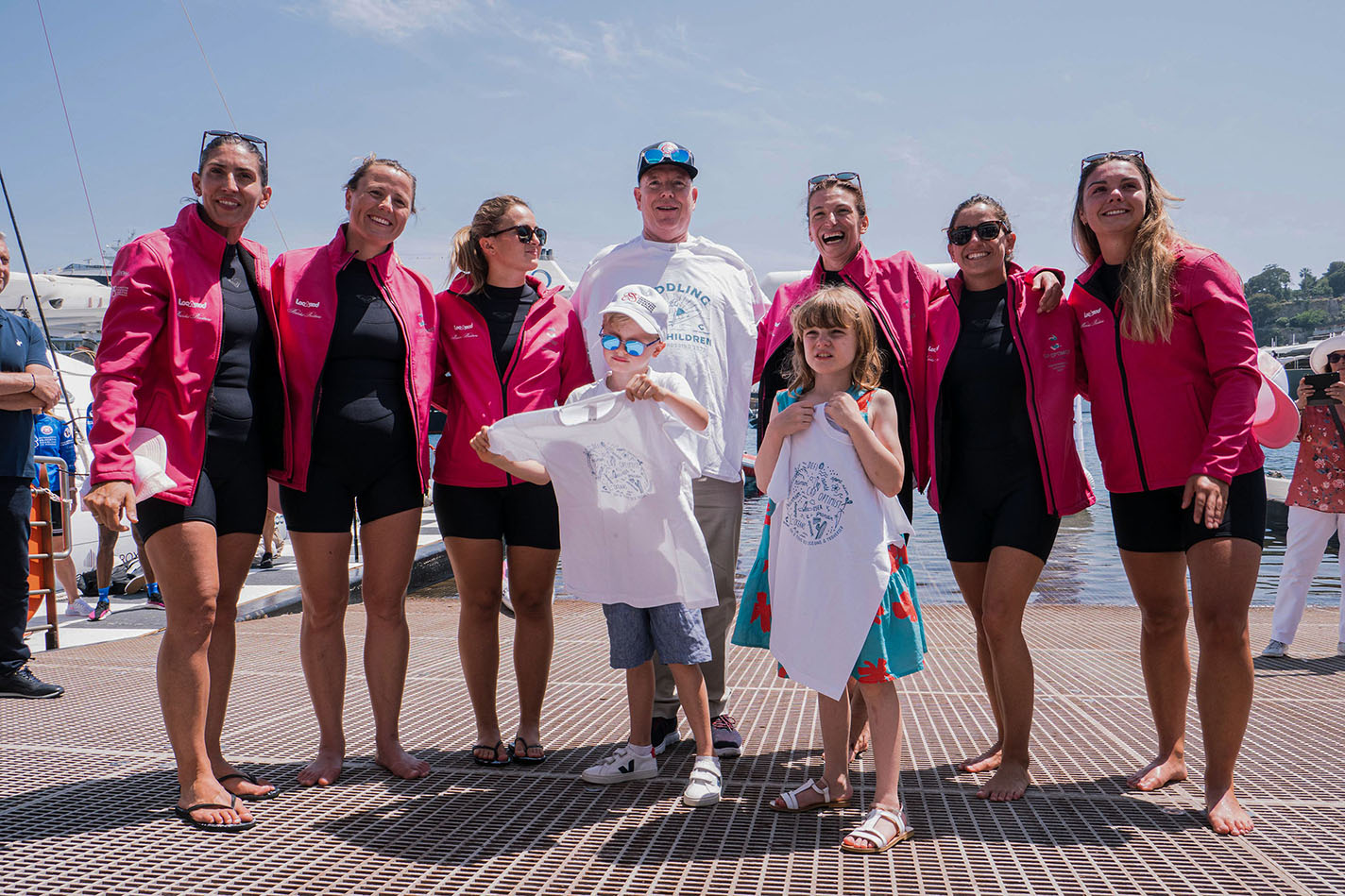 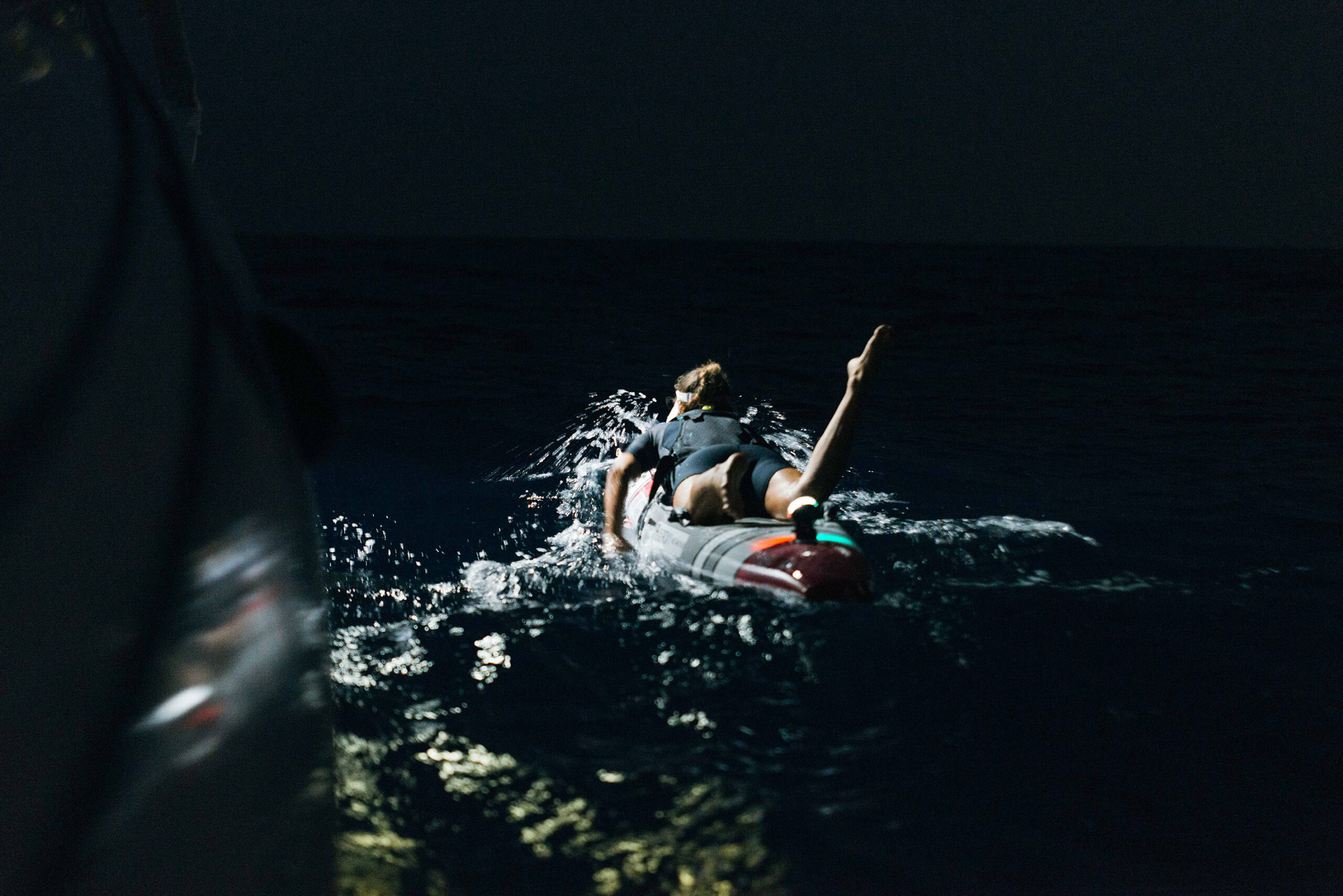 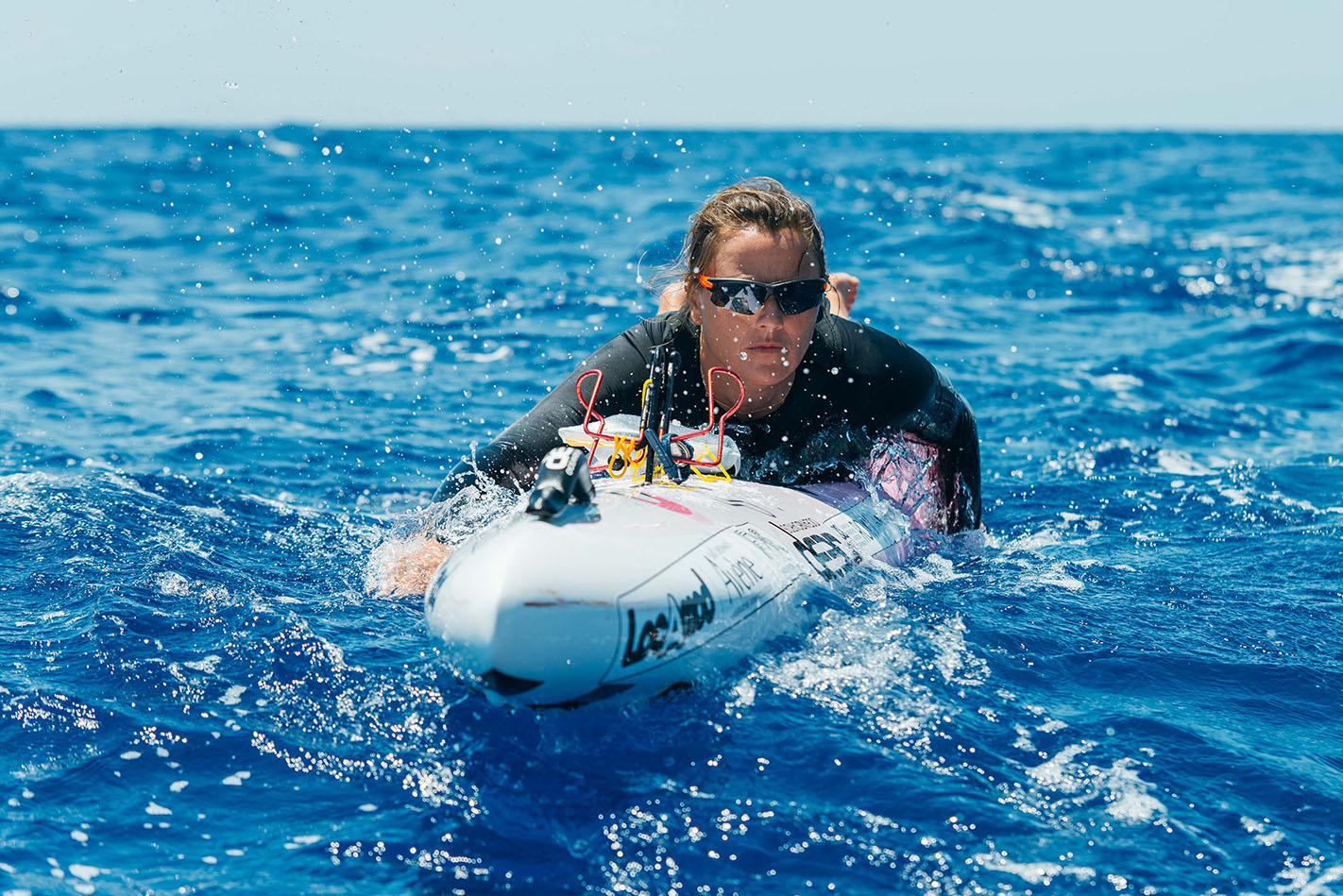 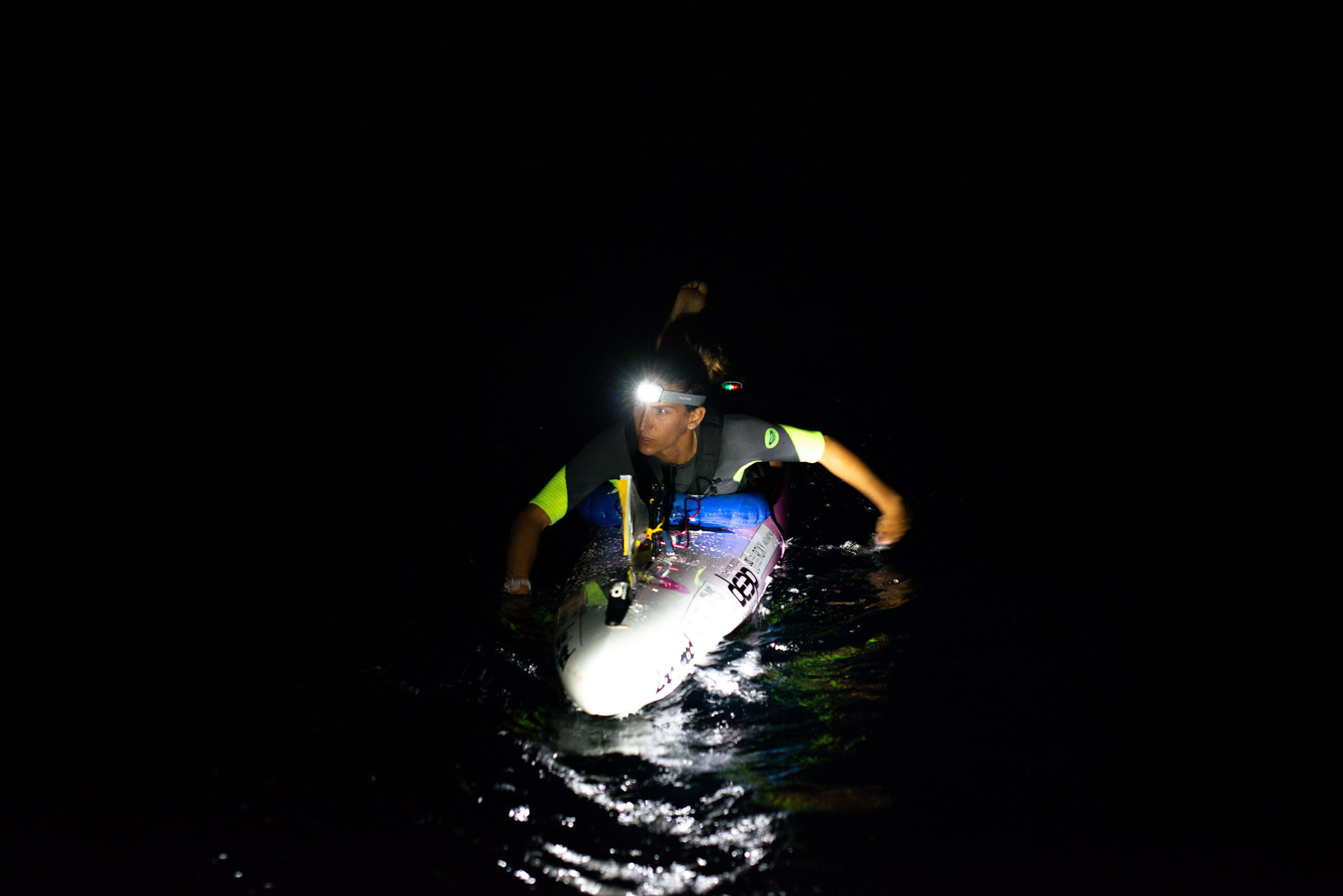 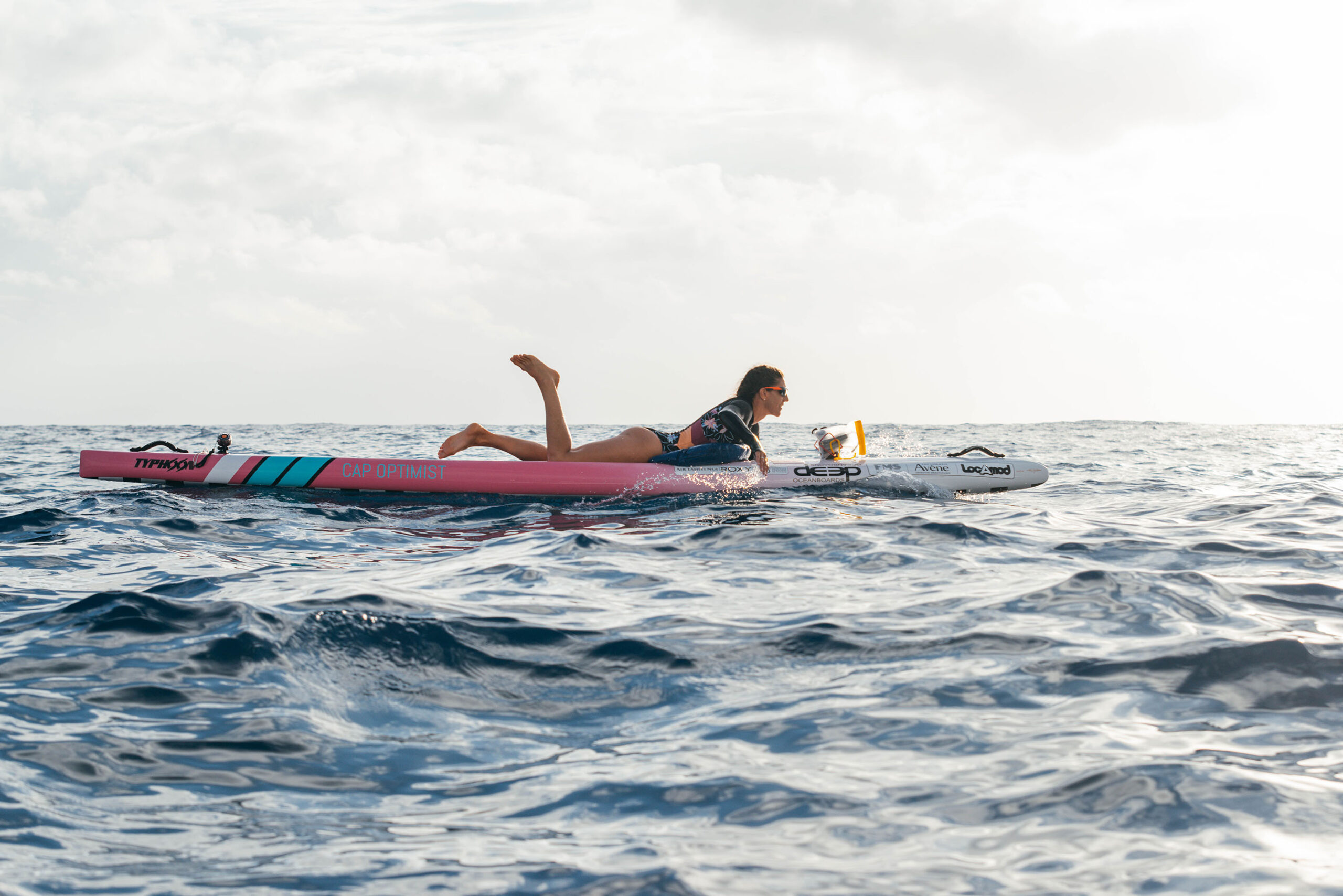 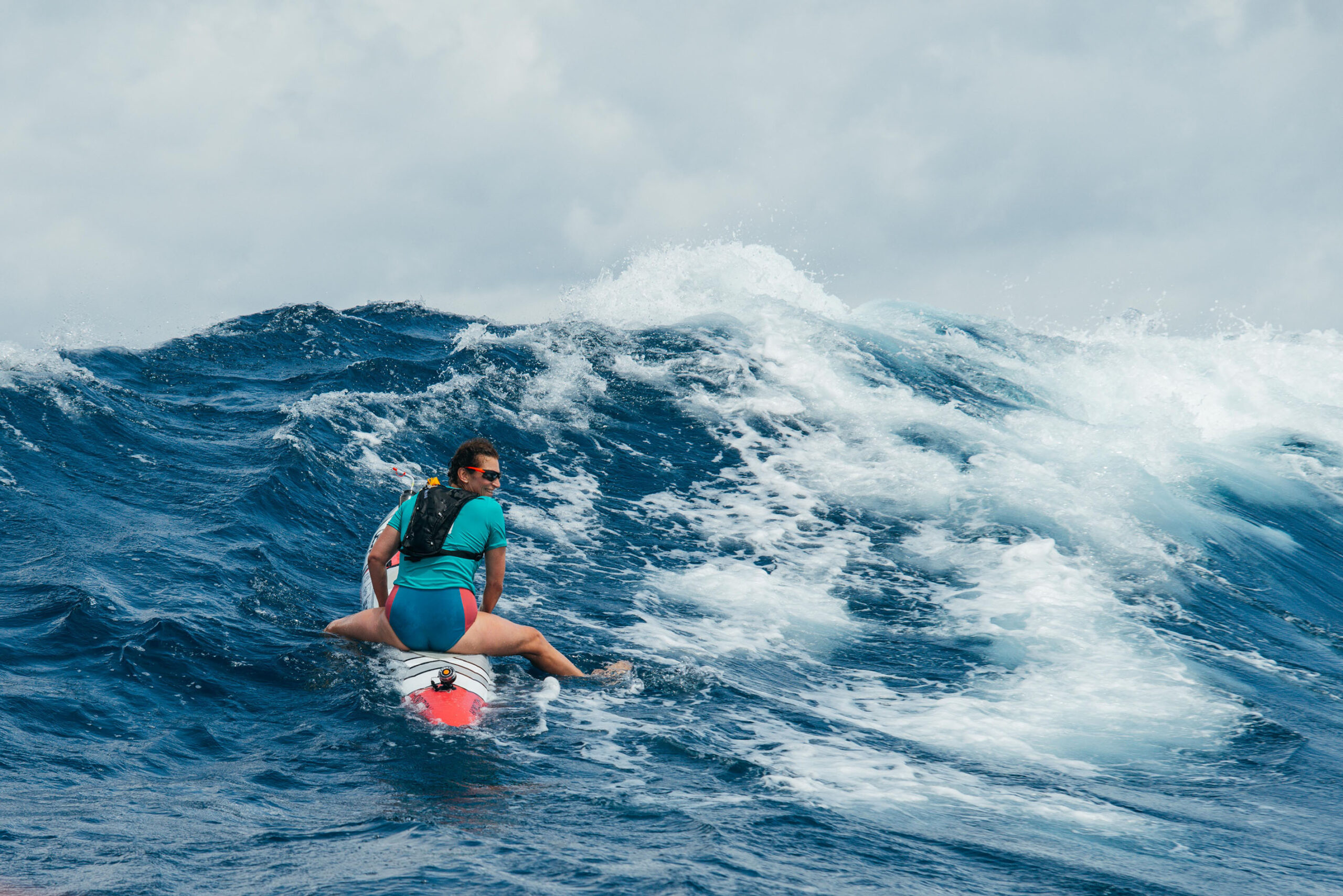 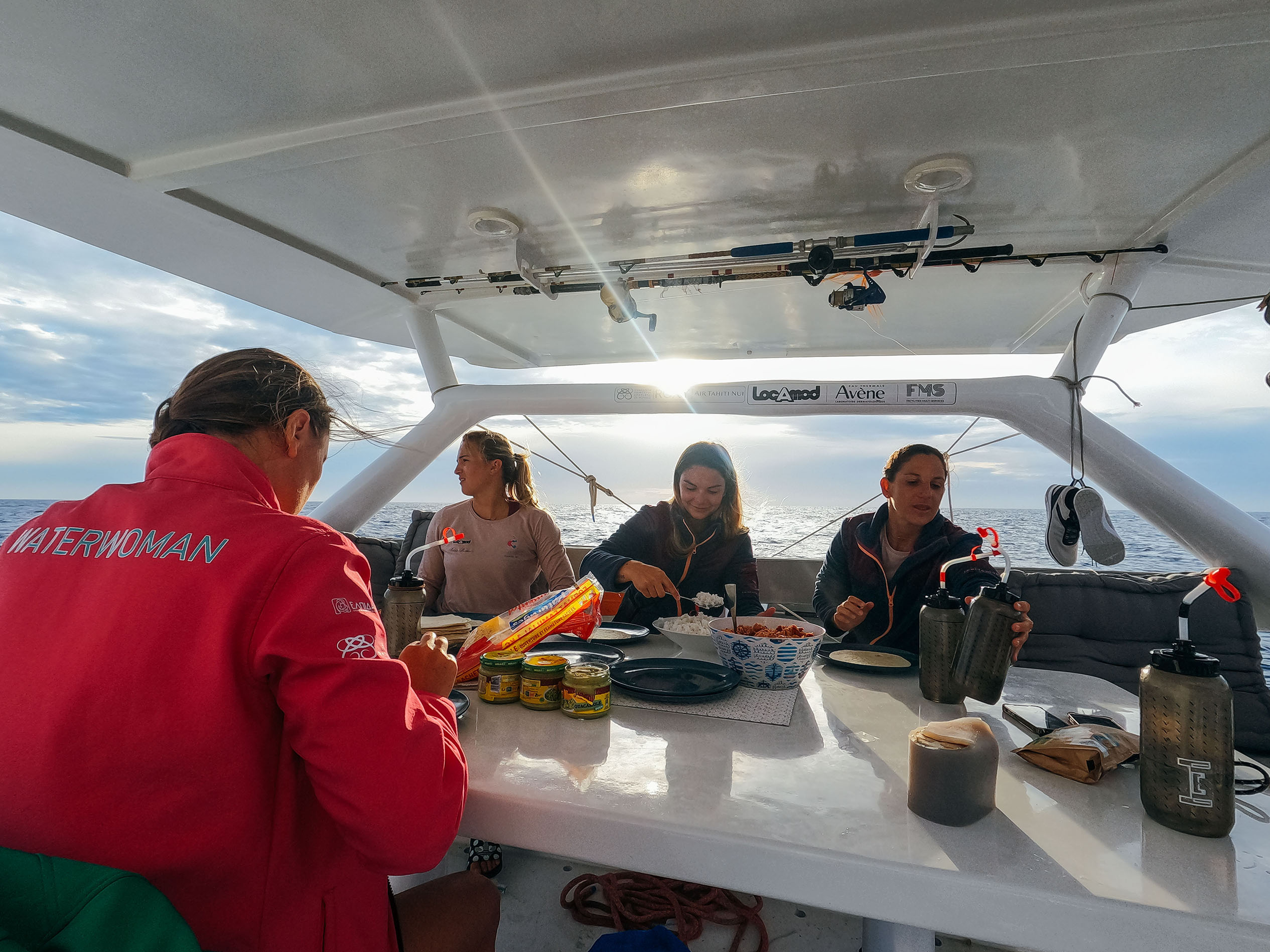 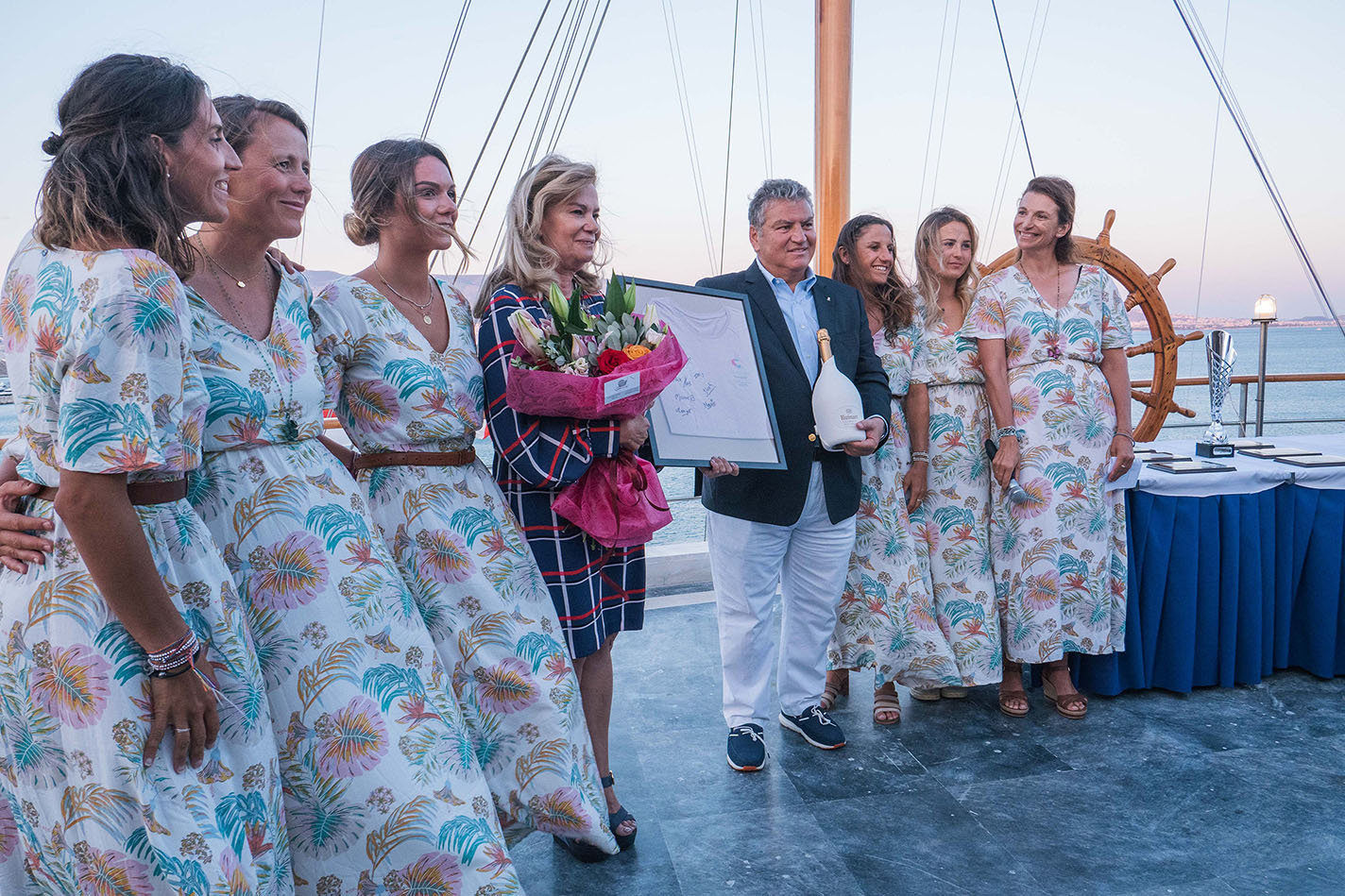 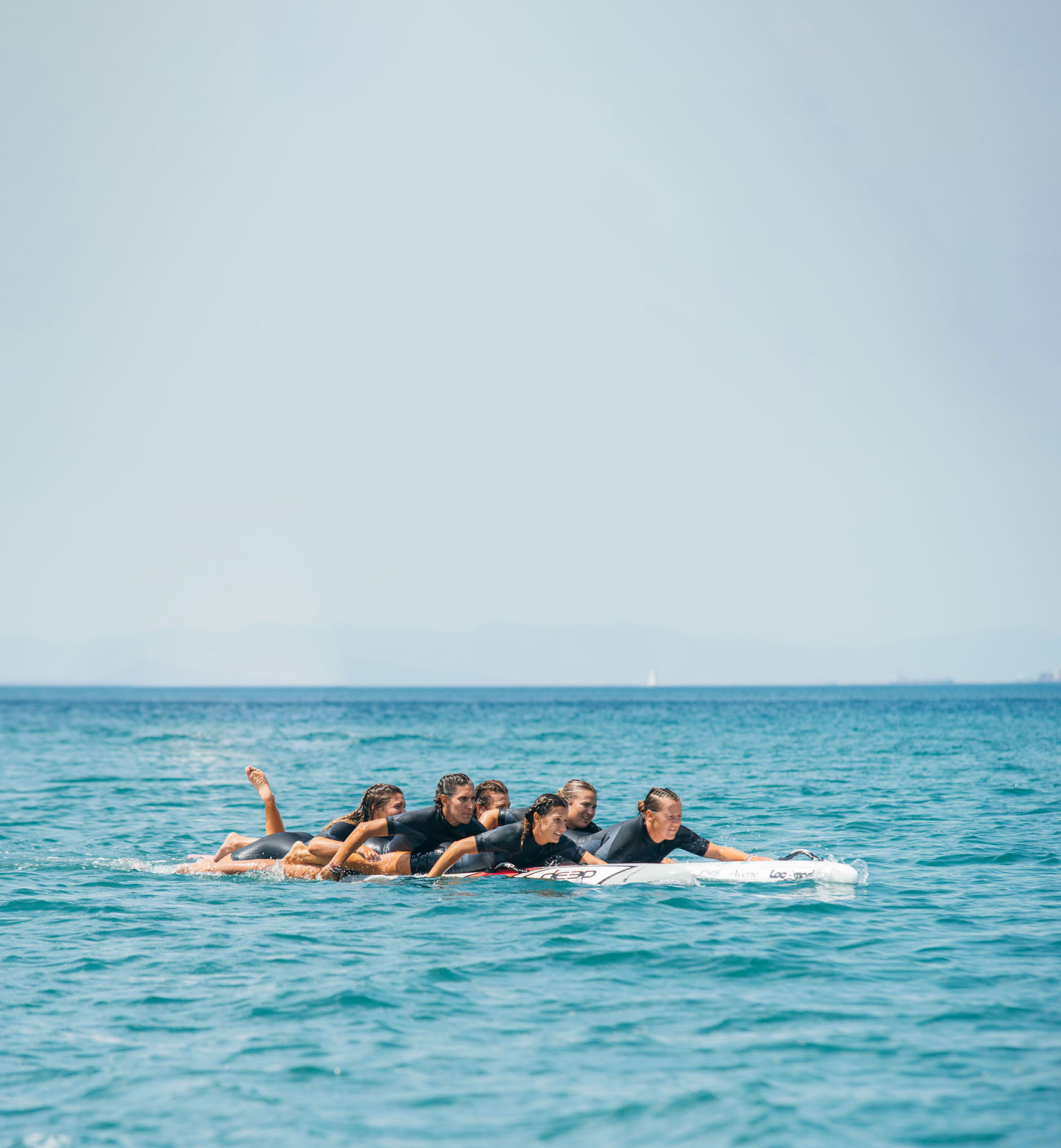