TUIGA , JEWEL OF THE PRINCIPALITY

Home » Yachting in Monaco » TUIGA , JEWEL OF THE PRINCIPALITY

A boat, a history

Pampered by all since becoming the flagship of the Yacht Club de Monaco in 1995, Tuiga, born in the early 20th century, is one of the most beautiful jewels of the classical yachts meetings. She now trains young generations of sailors, without winches, nor pity…

The metre rule, this scholarly equation enabling sailboats to compete on an equal footing while giving architects some freedom of interpretation, was created in 1906. The most famous boats in this international rule are of course the 6mR, an Olympic boat since 1908 and the 12mR, the America’s Cup vessel from 1958 to 1987. And the 15mR whose racing life was short (1907 – 1917), but intense. Tuiga belongs to this family that only counted twenty units. But what a lineage !

The 15mR class started taking off in 1909 with the construction of six units including Hispania, commissioned by King Alfonso XIII, designed by the famous William Fife and built in Spain, in the Karpard shipyard in Pasajes. A close friend of the king, the Duke de Medinaceli ordered an almost identical sailboat that was built in Fairlie, Scotland, at the Fife shipyard. Just a few months were necessary to create the beautiful “composite” hull with a mahogany planking and bronze rivets on a steel frame. Thus, was born in the spring of 1909 the amazing and famous Tuiga. Amazing because this aristocracy and wealthy’s plaything is a thoroughbred designed for competition. Famous because no sooner was she launched than she clocked up the miles in the Atlantic to face her sister-ship Hispania in San Sebastian where she finished second, a few metres behind her noble competitor. A month later, in Cowes, the 15mR, Hispania won three races, while Tuiga took second place three times. As if to confirm the rumour that the Duke de Medinaceli was letting the king win out of deference, Tuiga finished at a stone’s throw from Hispania during the San-Sebastian-Biarritz race the following summer. And as if to perfect her reputation of eternal second, she did it again at Ryde international regatta, won by… Hispania. In 1912, the Nicholsons shipyard launched Istria, a revolutionary 15mR. Her one-piece mast prefigured the Marconi rigging while the lighter hull in pine slats allowed to carry more ballast and sails. The two jewels designed by William Fife were definitely surprised in full swing by such technological progress, and quickly found themselves at the bottom of the rankings. In Cowes, Hispania finished fourth and Tuiga last ! In 1913, the two veterans made a modest appearance on the international circuit, at the regattas of Le Havre. The following year, while the world turned into a war zone, the regatta fever redoubled among sailing aristocrats. In the neutral Scandinavia, races were organized during summer 1915, where competed twelve 15mR bought in Great Britain.

In 1916, Tuiga and Hispania, apparently inseparable, joined the Nordic fleet. The first was sold to a Swedish yachtman who renamed her Betty IV while the second delighted a Norwegian racer. In 1917, while the Russians were making their revolution and the French, English, Americans and Prussians were still at each other throats, Scandinavia fell in love with the wonderful yachts of the International Rule. The same year, the Norwegian naval architect Johan August Anker, the future father of the Dragon, designed Neptune, the twentieth and last 15mR built according to the 1906 class rule. However, 1917 also marked the end of the lunacy of regattas on these thoroughbred over twenty metres. And everyone then had a more or less fortunate retirement. In 1923, Tuiga was bought by the vice-commodore of the Royal Thames Yacht Club and headed back to her mother country under the name of Dorina. Ten years later, the boat was acquired by J. Colin Newman. She was renamed Kismet III and endowed with a Marconi rig that made her the scratch winner of the Fastnet Race 1935. The proof that such a perfect hull could still do wonders in one of the most famous European races, even 26 years after her launch. All things considered, when many 15mR have experienced abandonment and mudflats agonies, Tuiga had done rather well. In 1936, her path crossed with the Douglas family who pampered her for 34 years under the name of Nevada and, even made her pass in modern times by giving her her first engine. In 1970, she became the property of Jan Rose, from Glasgow and joined the Mediterranean and the charter fleet. Out of convenience, she even received the 12mR Sceptre’s aluminum mast.

Luckily, after ten years of charter and an attempt at restoration by two French who wanted to circumnavigate, an exhausted Tuiga, who had since reverted to her maiden name, surfed on late eighties’ nascent wave of classic yachting. She owed her salvation to three exceptional men : Albert Obrist, a collector of ancient yachts, who bought Tuiga in 1989 and also owned the magnificent Altaïr (a Fife design), William Collier, an erudite naval historian and Duncan Walter, an enthusiast naval carpenter and director of the brand-new English shipyard Fairlie Restorations that was created by Obrist for Tuiga. Restoring the 15mR took four years. More than a year of negotiation was first necessary with the last owner of the Scottish yard, Archie Mc Millan, who was then in his nineties, to acquire nearly all the Fife design he stored in a garden shed. The next step was then to use a step by step approach inside the hull to rebuild the entire structure and the plank, as the massive corrosion between the mahogany planks, the steel frameworks and the bronze rivets left no intermediary alternatives. Thanks to the original designs, the yard fully restored Tuiga’s former splendor, as was the will of the three men. As new, the boat rushed once again on the Atlantic, then to Saint-Tropez where she immediately asserted her superiority against Moonbeam III during the Nioulargue 1993.

Immediately, Bernard d’Alessandri, General Secretary of the Yacht Club de Monaco and vice-president of the International Mediterranean Committee, saw in Tuiga the sailboat that would fulfill his wish. “We needed a boost and to find a flagship that reflected the sports dynamics of our club,” he says. As a top authority in the classic yachting, he convinced H.S.H. Prince Albert II that visiting this boat was worth the detour. In the early hours of a fine autumn Sunday, both went to Cannes. Did Eric Tabarly’s passion for this Fife design weigh in the balance ? Nevertheless, via the creation of a Tuiga Committee, the boat was bought to Albert Obrist and quickly integrated the most hospitable Yacht Club, welcoming its members during sea trips or regattas. The 15mR also regularly welcomes young trainees interested in careers in classic sailing. In addition to 500 hours of training (marine carpentry, seamanship, fairing, sailmaking, mechanics, etc.) the trainees made their first steps aboard during the Prada Challenge. A unique opportunity to discover the art of handling 411 m2 of sail area without any winch. Violence can come on board when the wind gets angry. During an outing under the leadership of Eric Tabarly, who never missed an opportunity to take the helm of this unit he considered to be the most beautiful Fife, (on an equal footing with his Pen Duick), 30 knots of winds were whipping Tuiga under full sails. Against the advices of some teammates, including Bernard d’Alessandri and Prince Albert II, Tabarly did not want to reduce the sail area. As is well known, slowing down was not part of his vocabulary. Consequence : a gybe caused a crewmember to fall into the water while the mainsail slipped from the Prince’s hand, severely burning his palms. The 15mR had just shown her character and no one blamed our national sailor…

The “King” of the Principality

Thus, the wonderfully maintained Tuiga still continues in the 21st century her long life of seas thoroughbred, nine years after a centennial fiercely celebrated in the Principality during the Monaco Classic Week 2009. For some years now, she has been regularly competing in the Paneraï circuit with the three other 15mR still sailing, among which… Hispania ! 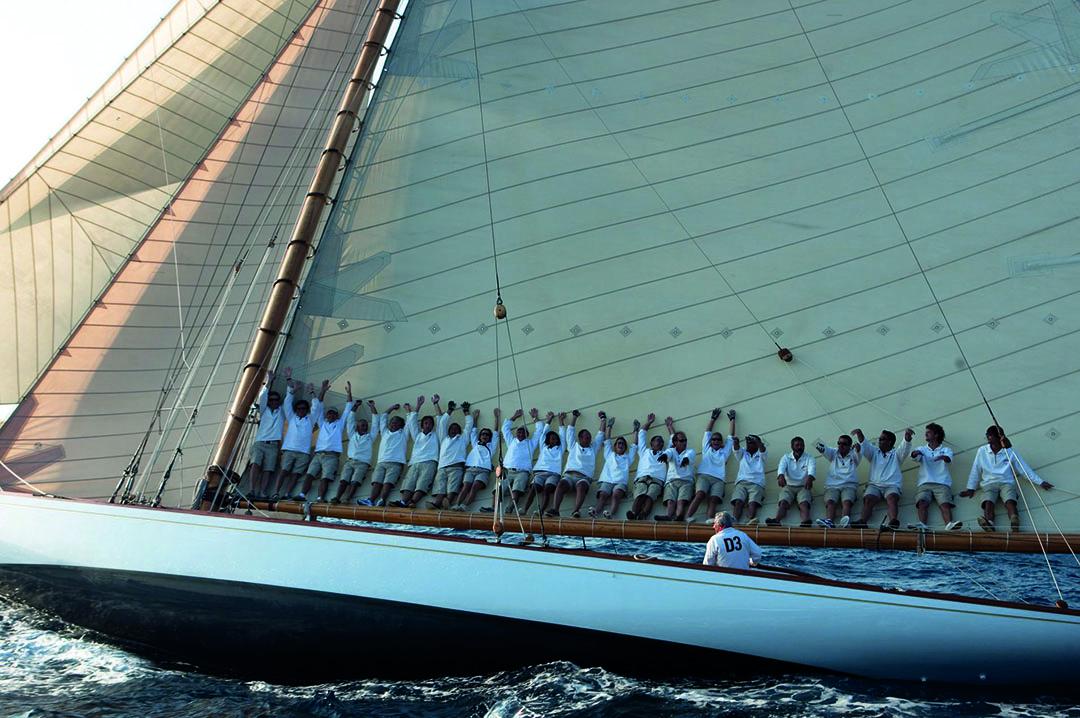 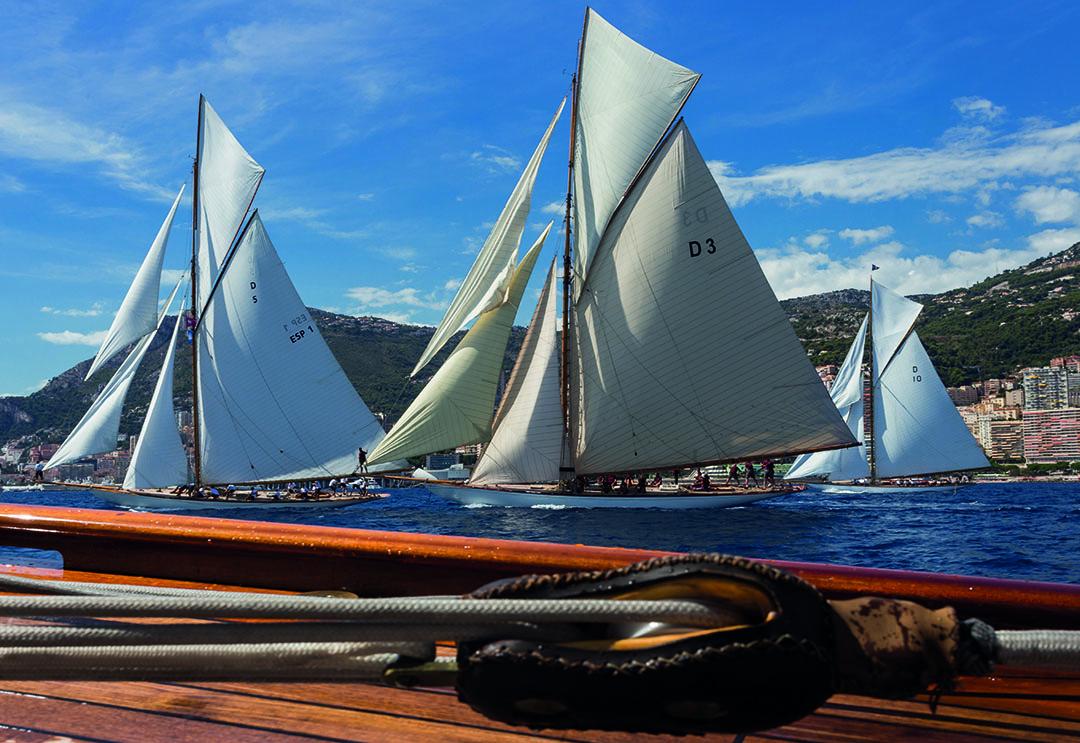 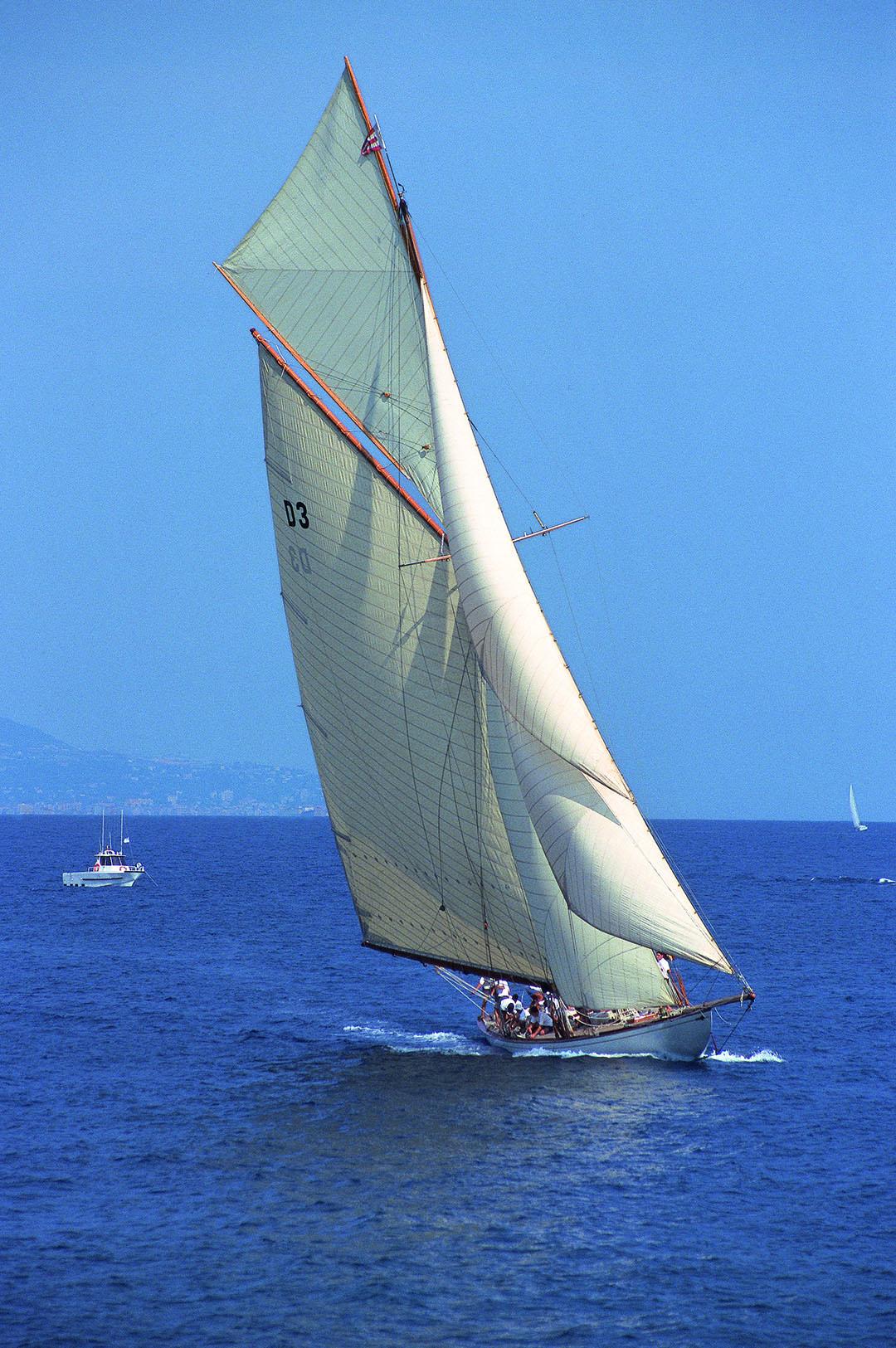 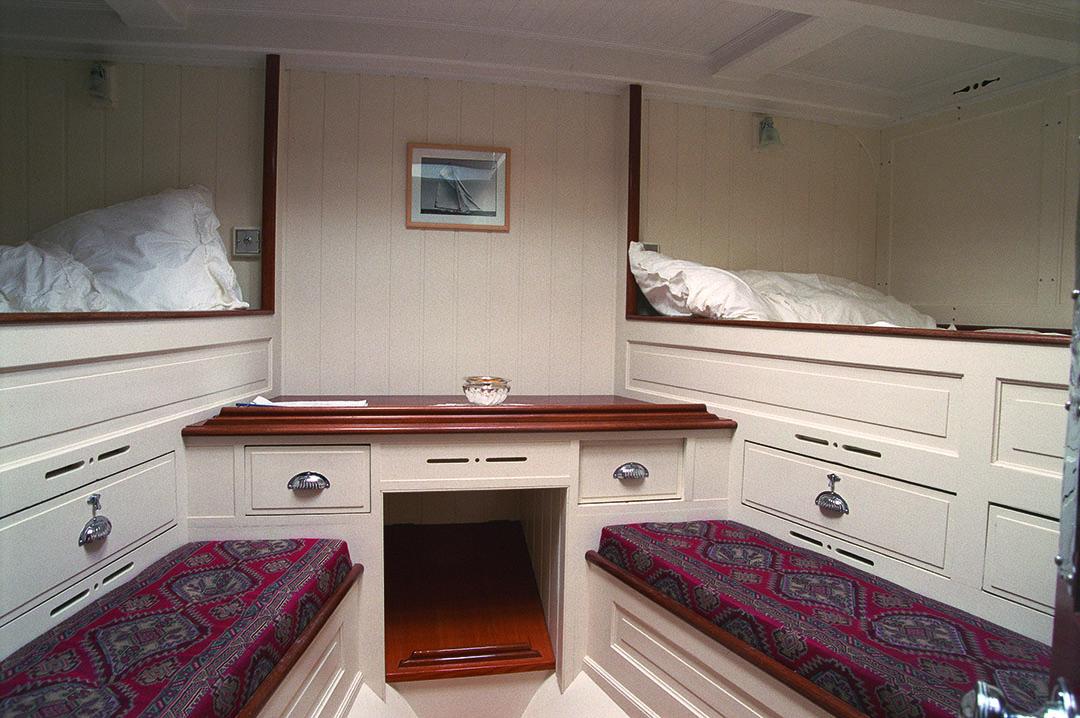 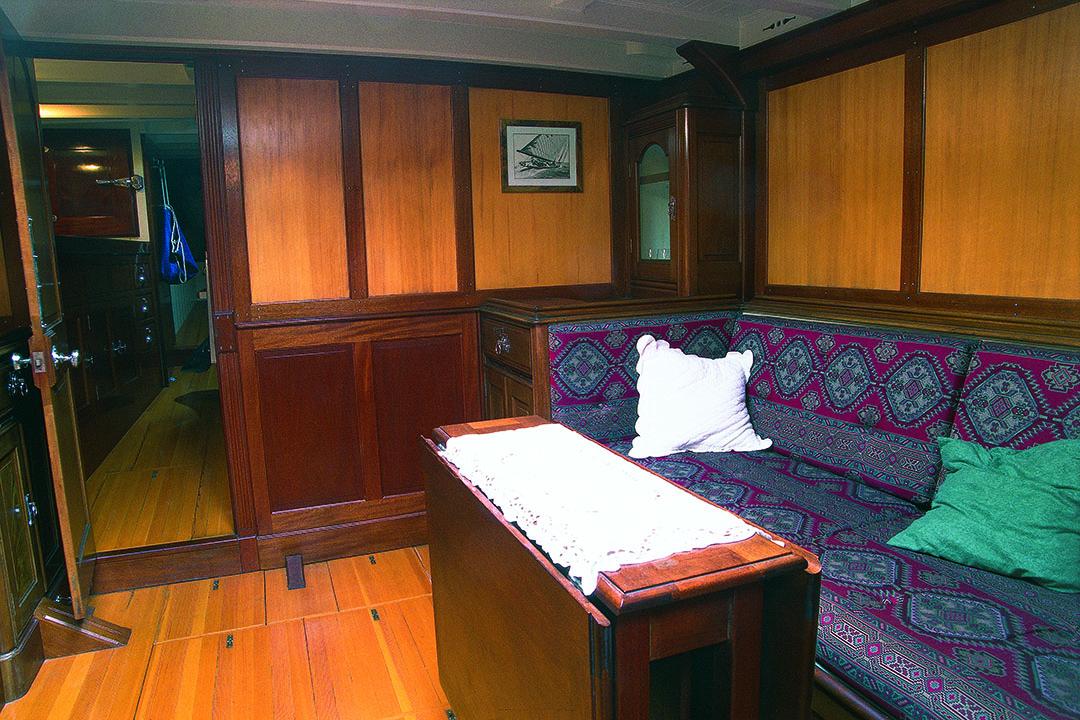 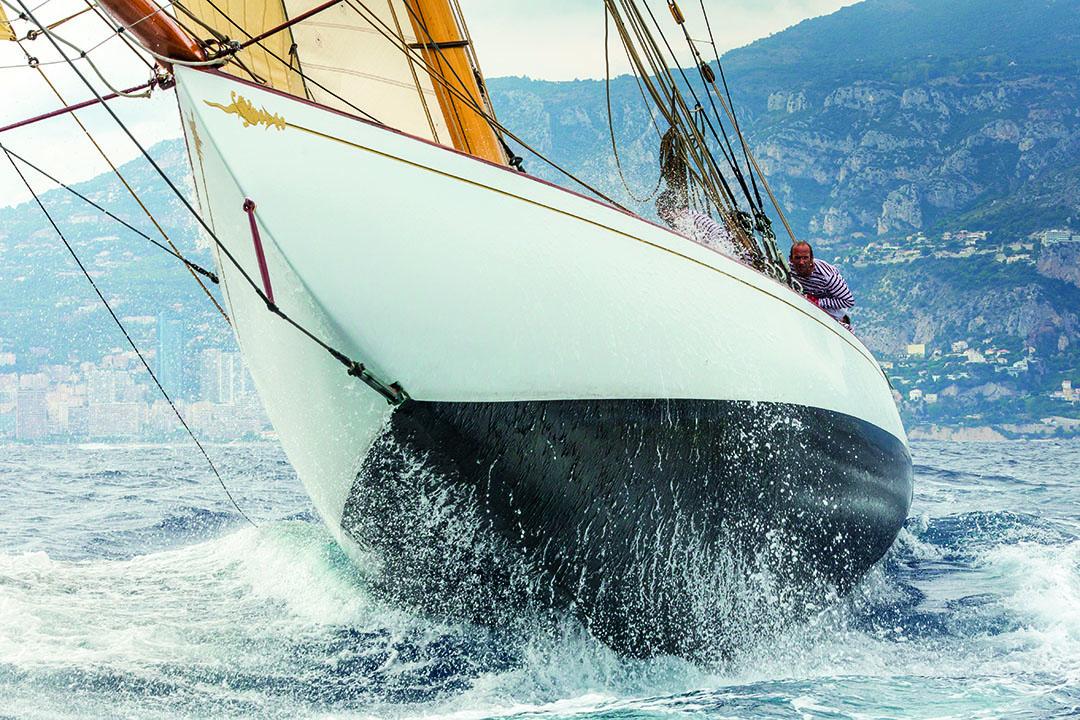 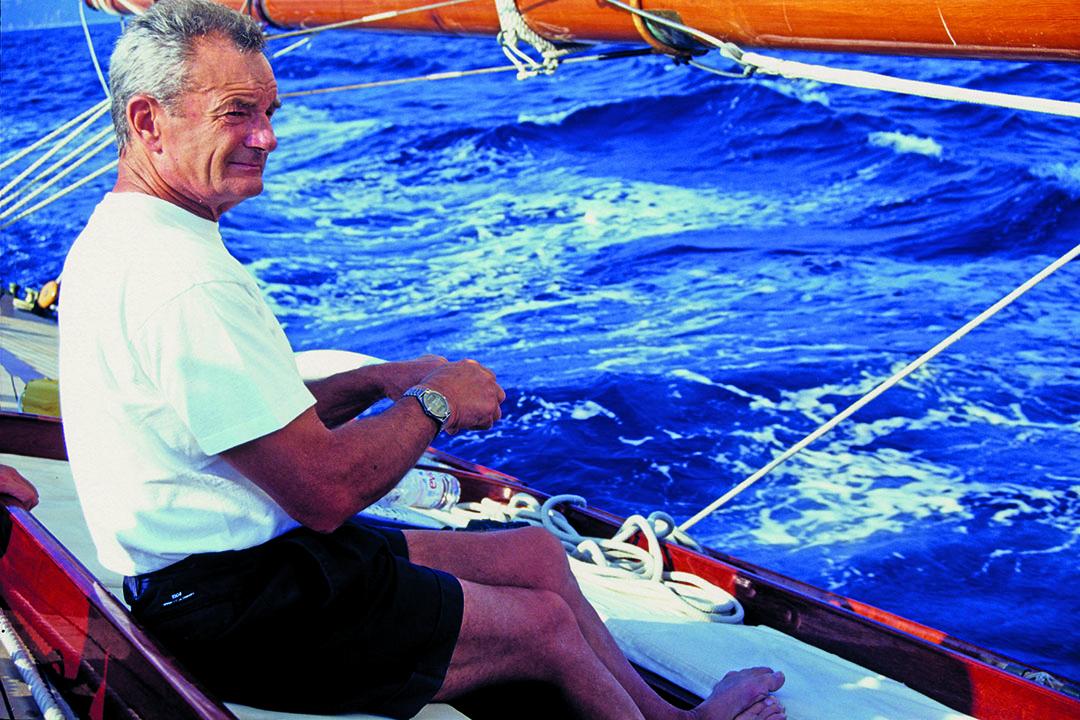 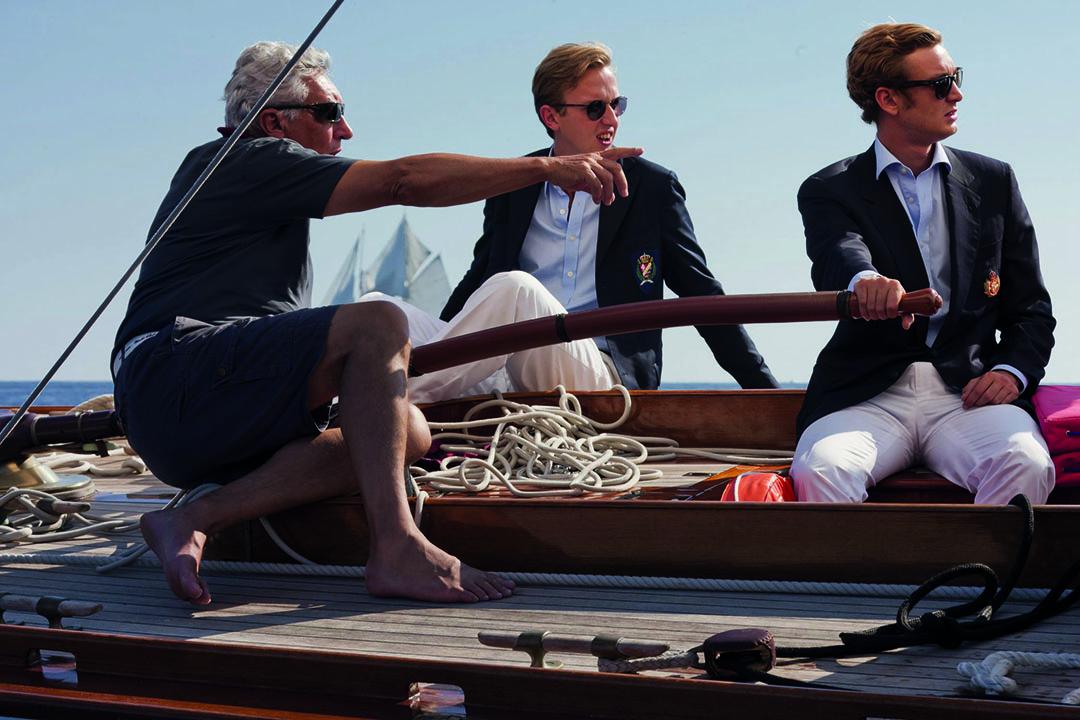 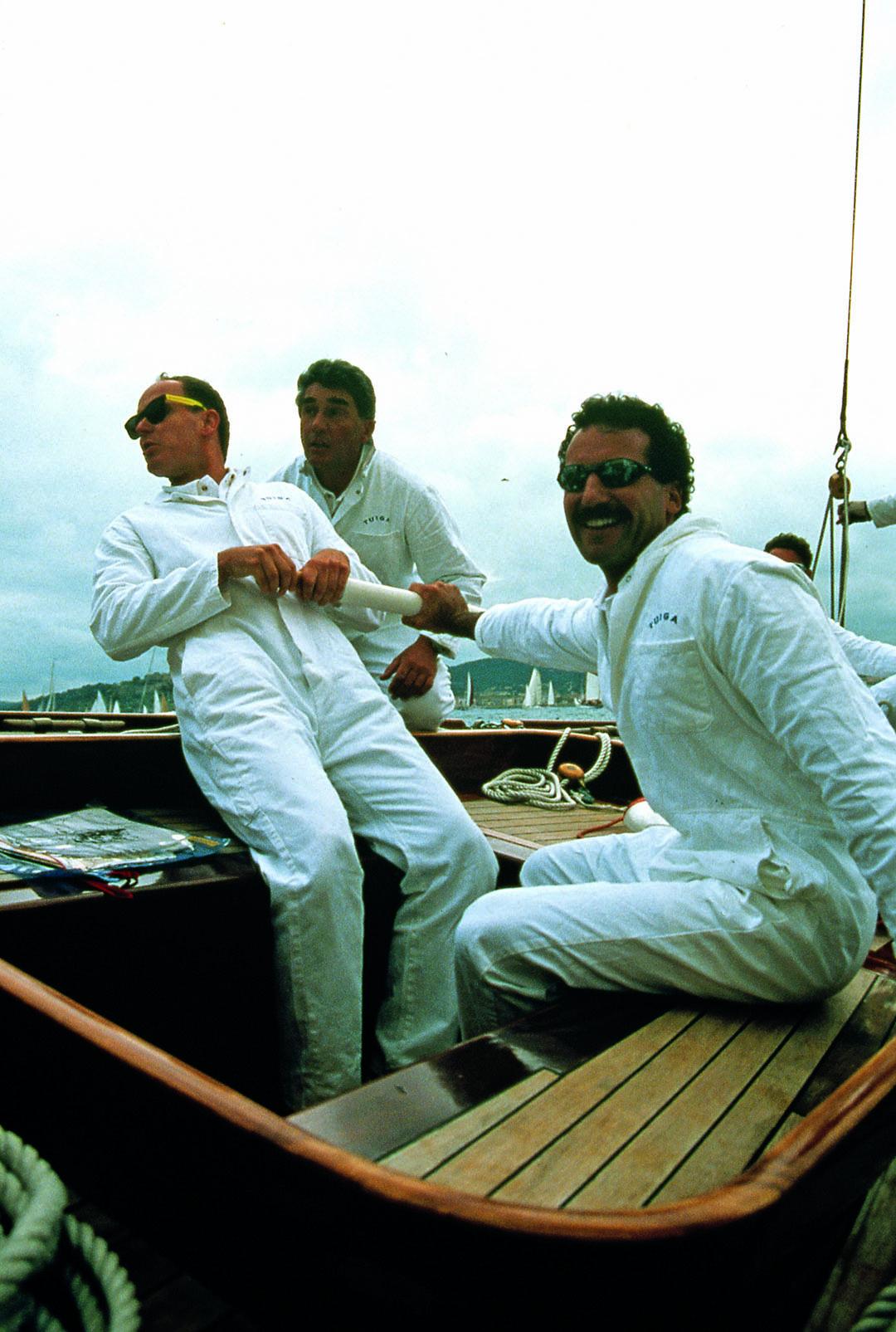 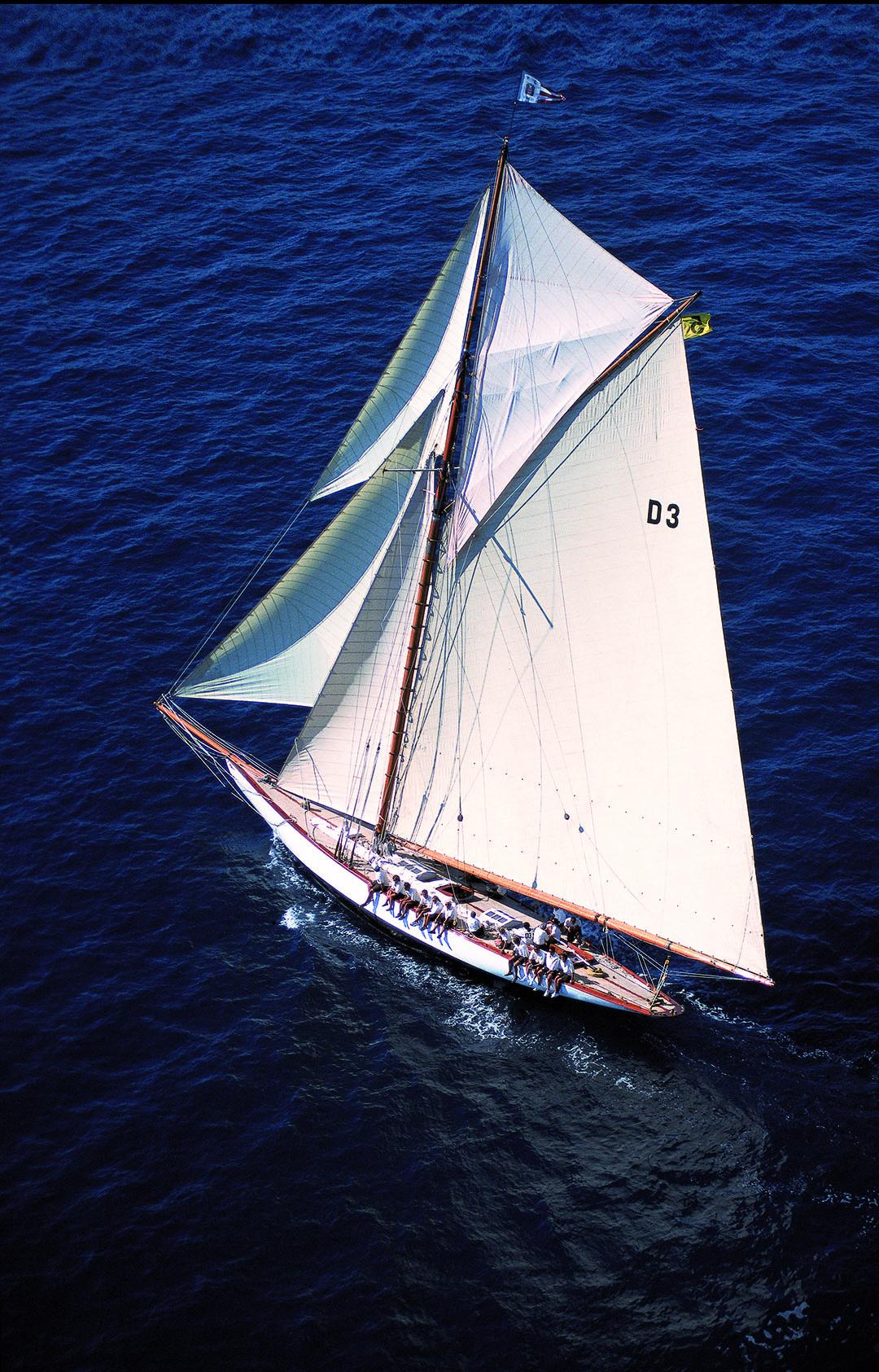