A BOAT, A STORY

The Grimaldi family has always demonstrated its love of sea and yachting. Princess Caroline of Hanover also embraces this passion aboard an early 20th century yacht with a flattering pedigree. History and misadventures of Pacha III, an exceptional motoryacht born across the Channel at Camper & Nicholsons.

Great-Britain, February 1963 : King George V passed, requesting in his will the deliberate sinking of the yacht Britannia. In Buckingham, his difficult succession held the population in suspense. Meanwhile, activity was humming in Gosport, just across from the Isle of Wight, where the all-mighty shipyard Camper & Nicholsons has been conceiving the wildest yacht for nearly a century. There, the order books were filled up and in their huge hangars, steel was a king. Nine units were near completion, including the J Class Endeavour II, a sailing yacht over forty metres destined to the America’s Cup merciless duels. Just around the corner, the construction of a luxurious 36 metre motor-yacht commissioned by a certain Walter Crooke was starting. Like all the shipyard clients, this gentleman demanded excellence. And he came to the right place when he commissioned the in-house architect, Charles E. Nicholson, a seaworthy, reliable, luxurious and comfortable boat intended to peaceful cruising on the Channel and the Atlantic. When such project would require today a year or two, the Gosport shipyard managed to complete it in slightly less than six months and in August 1936 Arlette II was launched. For more than 50 years, her finely crafted long and sleek hull sailed the seas and oceans in the hands of many owners, before becoming Princess Caroline’s yacht, under the name of Pacha III. Walter Crooke, her first owner, did not have time to enjoy her, since in 1940, Arlette II was placed under the Royal Navy’s flag, and based in Falmouth, at the disposal of the Vice-Admiral Sir Henry K. Kitson who assigned her to the “Examination Service”. Her role : protecting the military port. The yacht thus escaped the evacuation of the Dunkirk pocket, which mobilized ninety-two pleasure yachts converted by Camper & Nicholsons. Among them : the famous Bounty Class whose silhouette is close to the Arlette II. After these dark times, the yacht regained its original splendour as Priamar. She then migrated to the Mediterranean and became Cardigrae V, in the hands of the distributor of Rolls-Royce and Bentley, Richard R. Dutton-Forshaw. In the 50’s, Louis Renault bought the yacht and renamed her Briseis, before selling her in 1967 to the painter Bernard Duffet, who moored her in Saint-Tropez, in front of the Escale. We must specify that the Maritime Affairs, which is responsible for ensuring that two boats don’t have the same name, played a trick on the most eminent historians as Louis Renault had already ordered to Camper & Nicholsons a Briseis, launched in 1930, a mixed sailing yacht with an electrical motor, whose name remained in the registers long after her resale to the Olympic champion Gaston Thubé in 1952. From that time on, two Briseis were sailing the Mediterranean. Fortunately, any possible confusion was cleared away about twenty years later when the ex-Arlette II charmed – more with her lines than with her terrible condition – Princess Caroline and her husband Stefano Casiraghi, an offshore racing champion. In 1990, our Camper could not find a better mooring than with this Princely family devoted to yachting. Prince Rainier III had also owned a Camper & Nicholsons : the Deo-Juvante, ex-Monica, that was later replaced by the Costa del Sol and then by the Albercaro (Albert-Caroline). In accordance with this tradition of naming a boat by combining part of the children’s names, followed the Carostefal, the Stalca and finally the Pacha (Pierre-Andréa-Charlotte). Nearly 60 years after she was launched as Arlette II.

Pacha III, newer and more performant than ever

Just after purchasing the boat, the tragedy occurred. Stefano Casiraghi passed away in a terrible offshore accident off the coast of Cap Ferrat. In the mists of grief, the yacht faded in the background, but rapidly Princess Caroline decided to carry out the restoration of this boat that her husband would have loved to have seen. In two years, she was refit by the Italian shipyard Valdettaro in Porto Venere. Two 400 hp Caterpillar V8 replaced the old and exhausted Deutz. The riveted steel hull was entirely overhauled, electronics and state-of-the-art technologies discreetly embarked. The engine room welcomed air conditioning units, watermakers, heating and hot water units, the diving compressor and many other essential features of the 20th century. The deck was renovated with the utmost respect to the Camper & Nicholsons plans, as the Princess requested. The superstructures were rebuilt in aluminium, probably to lighten up its upper parts, which caused some electrolysis problems, now resolved. Finally, icing on the cake, the hull was also equipped with the two-metres-long stabilizers that her previous owners must have dreamed of, considering how this long narrow hull must have been cranky. Finally, committed to respecting the authenticity of the boat, Princess Caroline only required a few layout changes. Two things to mention nevertheless : the living room fireplace was removed while the radio room near the wheelhouse was transformed into toilets. In the bare hull, the designer Jacques Grange revived the ancient splendour of this interior. Oak, mahogany, carved handrails, panelled ceilings, marine lamps, everything there is a witness of the thirties’ yachting, so tremendously “Victorian” or “so British” as they say today. However, there is a nuance : the bright and colourful fabrics plus the crowned fish, especially created by the artist Keith Harring, we find everywhere, from the embroideries on the living room cushions to the mouldings in the bronze deck equipment.

The saloon is bathed with light and colours

She is not the largest, nor the tallest, or the flashiest, far from it, but among the giant yachts moored in the port of Monaco, Pacha III is by far the most elegant. With her canoe stern, clipper bow, discreet free board, her 36 metres long fine hull is an invitation to set off over the horizon. Newer than new, this jewel has remained worthy of Charles E. Nicholson’s unequalled signature.

One would expect a rather austere, even haughty, atmosphere aboard an ambassador of the Principality. While the aft deck, a real summer lounge, actually combines without frivolity teak, varnished mahogany and other gleaming bronzes, upon entering the large saloon via its double-swing doors, the visitor is immediately drawn into the intimacy of a family atmosphere, filled with joy and memories. Bayadere striped carpet, straw-yellow square armchairs, sofas with large white and ultramarine blue stripes, four almond-green half-moon armchairs around a small round table in mahogany, oak walls lined with louvered low bookcases, numerous cotton cushions. In the soft light coming from the eight arched windows, with verdigris curtains and tiebacks, this living room exhales a sweet fragrance of happy holidays. This “holiday” atmosphere is also present in the dining room below, disrupting the severity of the furniture and partitions in mahogany and varnished oak. The rest of the ship accommodates four cabins and a full-beam master suite, plus towards the bow, the galley, the wardroom and the crew cabins, for the four year-round members plus a chef and a steward during cruises. Definitely the designer Jacques Grange successfully combined the British strict tradition of vintage yachts with a certain lightness coming from the Mediterranean.

In the bright and high wheelhouse, entirely clad of wood where, apparently, there is only a helm and a chadburn, the captain Nicolas Rouit actually enjoys the same equipment as the most modern yachts. On each side of the helm, the slatted doors conceal the electronic control units and all the instruments he needs to operate the boat and monitor its organs. The chadburn handle is actually the throttle and two small elegant joysticks allow to control Pacha III from outside the wheelhouse. Useful for stern-to mooring. Captain Rouit cannot hide his enthusiasm : “Pacha III regularly cruises the Mediterranean, often to Greece or Spain. With 32 000 litres of diesel, her range is about 3 000 miles. Her fine hull marvelously cuts the sea and even with two metres high waves, it easily maintains its average speed of 11 knots. Once, as we were leaving Ajaccio, we encountered for two hours a 3.50 m beam swell. She was still maintaining 11 knots. With 166 tons and a 2.50 m draught, this wonderful boat can sail in all weather. Life onboard always continues normally. We need to remember that Princess Caroline and her children are true sailors. Pierre Casiraghi, whom I got to know during my ten years aboard Tuiga – Prince Albert II’s sailing yacht – is currently engaged in the IMOCA circuit and preparing the Vendee Globe 2020.” 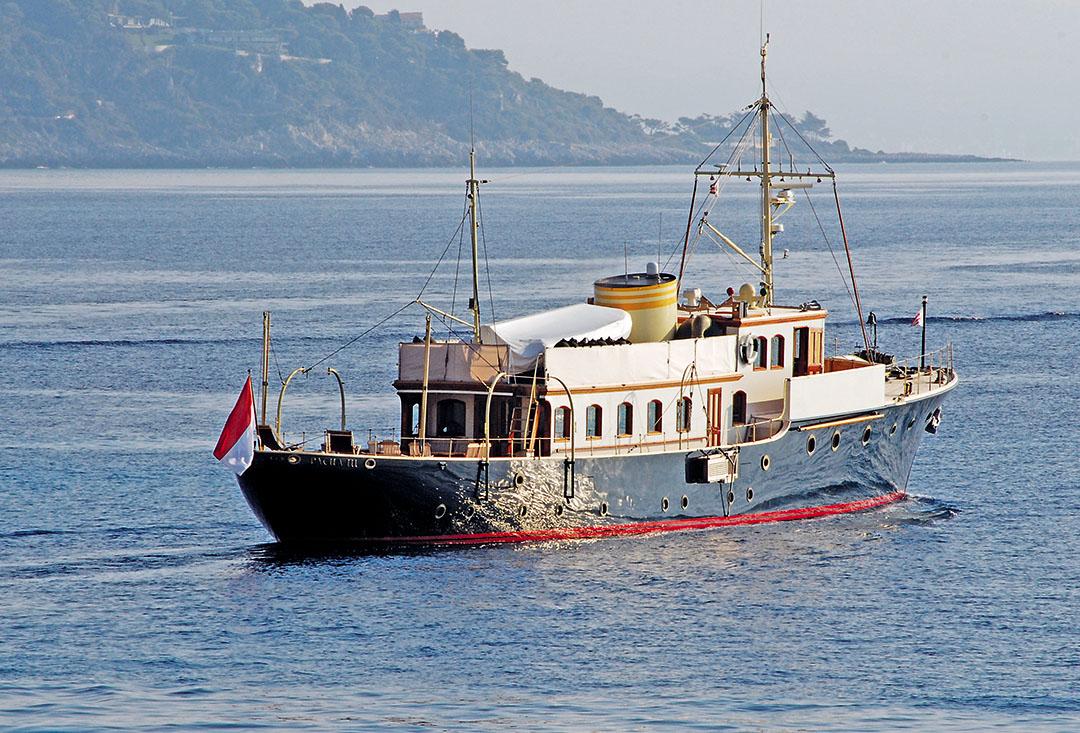 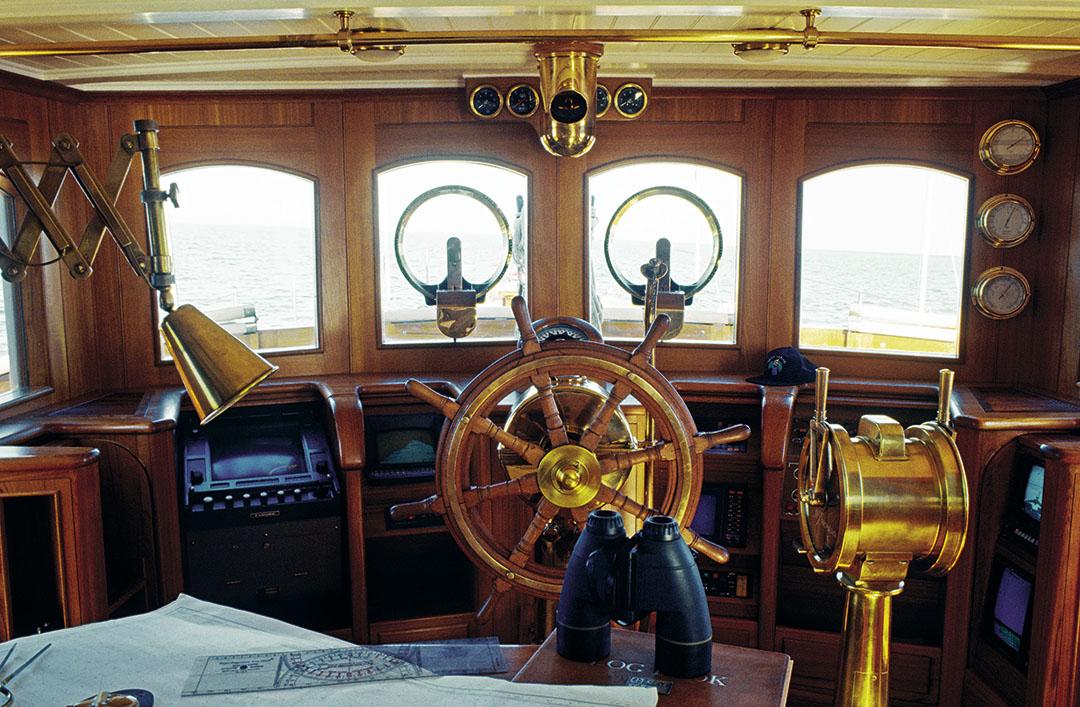 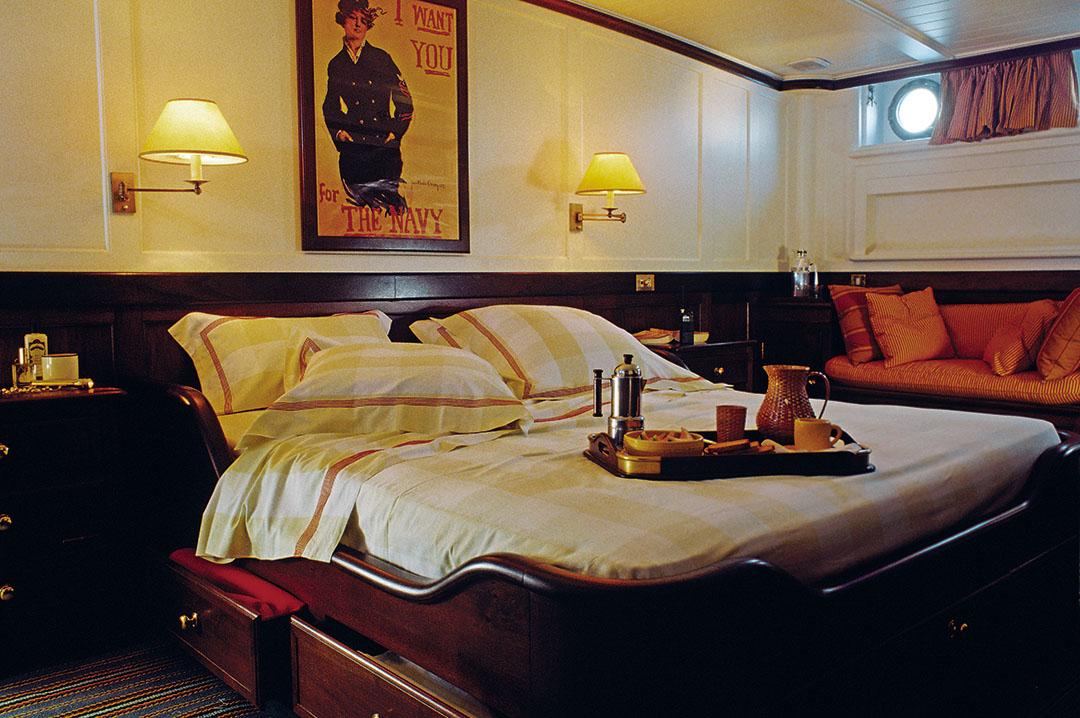 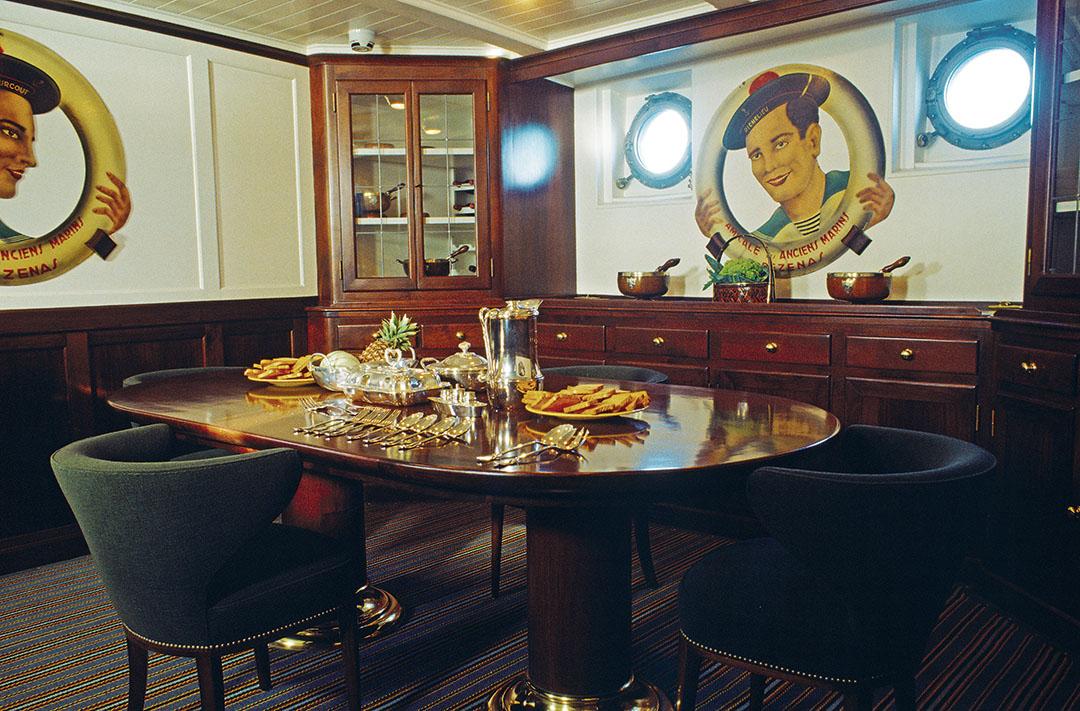 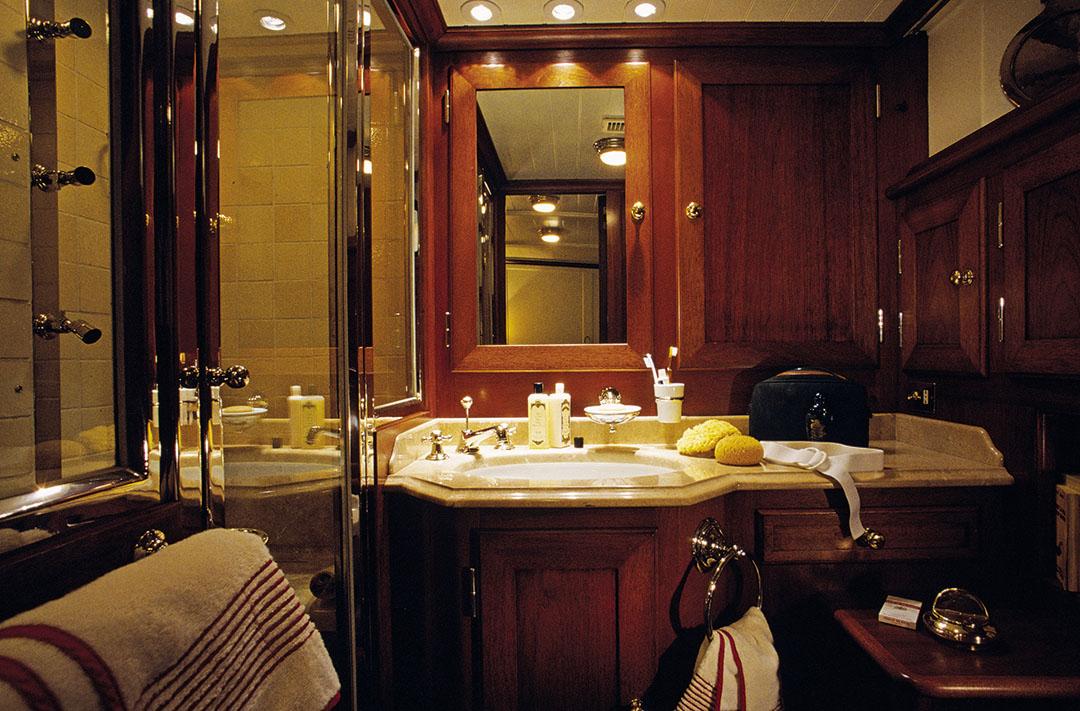 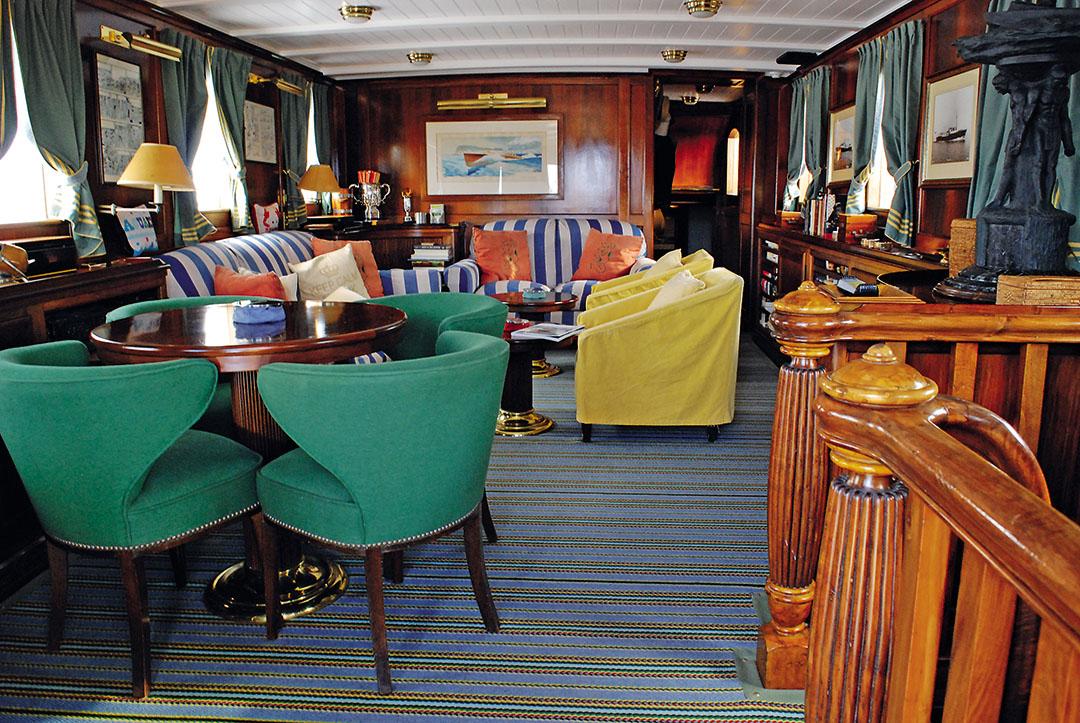 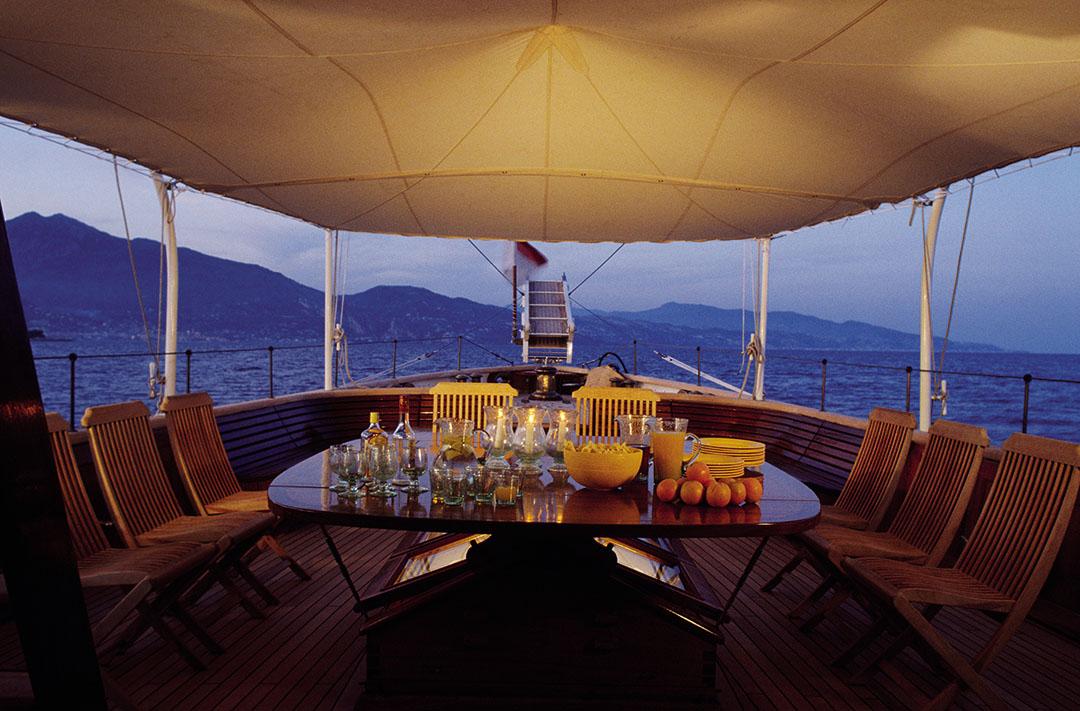 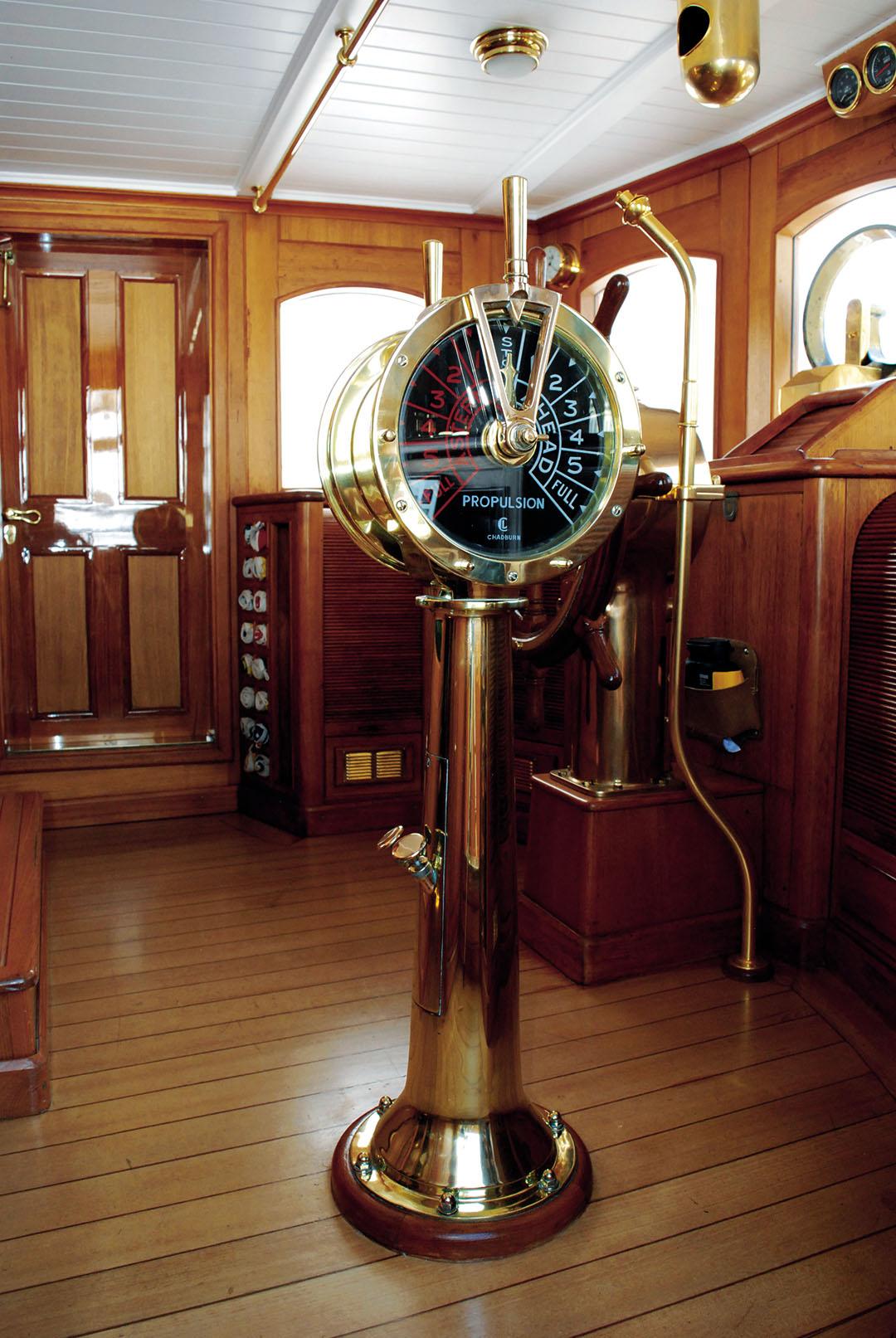 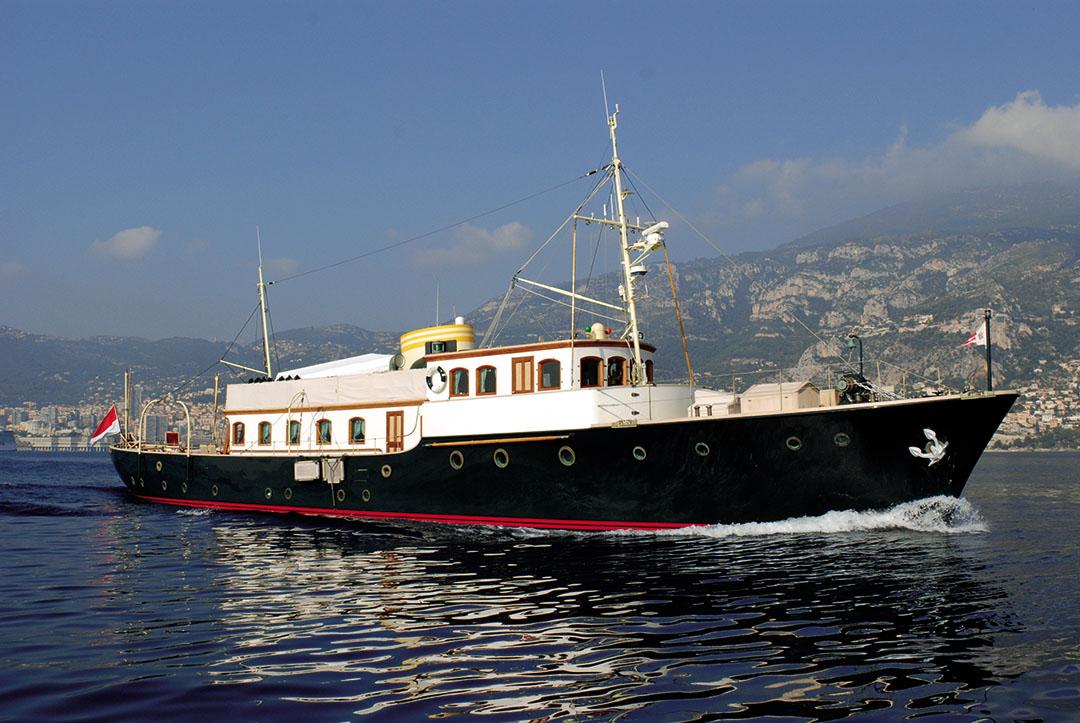 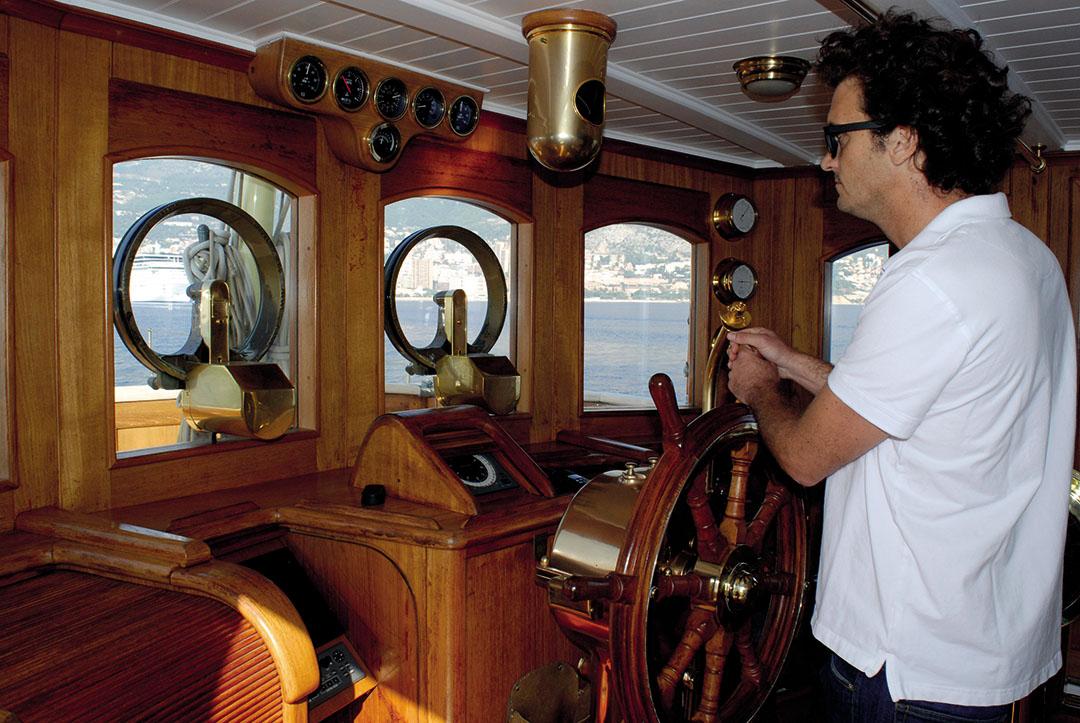