May the force be with her

And the speed too! Named “Darth Vader” by her owner, this dynamic open hardtop is further proof of the Genoa-based shipyard’s expertise in custom. But with this yacht, the “star wars” are peaceful, and one can easily imagine go from one port of call to another in record time to enjoy both her amazing nautical qualities and the art of living on board.

Beauty often comes from the harmony of proportions. The OTAM’s are perfectly balanced. Her taut, muscular lines reflect her raison d’être: to sustain very high average speeds, even in rough seas, for fast connections between select marinas and dream moorings. Another refinement is the custom design of this unique model named “Darth Vader”… In fact, doesn’t the Italian shipyard like to repeat that each new yacht leaving its warehouses is different from the previous one?

The other star is the wake!

Built in polyester reinforced with Aramat (Kevlar fibre), the 70 HT is staking on lightness and structural rigidity, to aim for a top speed of around 50 knots. To achieve this, OTAM called upon Umberto Tagliavini and its CEO Gianfranco Zanoni, a former offshore champion, who created this deep V-shaped hull (21°) designed to accommodate Arneson Drives with Rolla surface-piercing propellers, coupled to two 2000 hp MTU. These surface drives have the advantage of a more horizontal thrust than conventional shafts, resulting in a gain of 10 knots. At a good distance from the port of Cannes, the pilot pushed on the electronic throttles while raising the trims… We were captivated by the spray of foam created by the partially submerged propellers. Normally, the owner pilots her powerful open. It is definitely within her league as the Italian was the co-pilot of the late famous offshore champion Fabio Buzzi. For manoeuvres, she only relies on a bow thruster, which is not a luxury considering that manoeuvrability is not the strong point of surface drives… As the engine speed increased, the bow wave receded and atomised into a spray effectively deflected by the inverted chines. At full throttle (2 400 rpm), the big chop went by at full speed, i.e. 48 knots (40 at cruising speed), without altering the comfort on board. The impression of gliding effortlessly was delightful. We achieved a series of curves with a striking ease and precision while the trail of foam accompanied the boat’s severe interior list. Note that the owner has opted for a larger fuel tank (7 000 litres instead of 5 000) instead of a tender garage, for increased range. According to the shipyard, this extra fuel costs her the two knots needed to hit 50.

A one-off in Star Wars mode

Back to port, the owner clarified the identity of this 70-foot with a conquering profile and name. “I chose Darth Vader, and the themed decoration that comes with it, for my son. He’s a die-hard Star Wars fan!” The 70 HT is no spaceship but her silhouette steps into the future. She boasts the same – yet slightly more worked – dazzling lines that made OTAM’s “Fast and Iconic” range so successful. Let’s get back to Star Wars, the Darth Vader effigy is present throughout the boat: transom, cockpit, mirrors of the master cabin, and even on the hard top… No doubt, the owner’s son must be happy !  The resolutely modern atmosphere on board is the antithesis of the “classic yachting” style of the 85 GTS we tested previously (see Yacht Class n°22). She has more generous hull windows to let more light in, while the saloon/wheelhouse area is totally enclosed, topped by a fixed hard top. In addition to the two-seater helm, a large sofa and a bar, this air-conditioned cocoon offers long sailings protected from the elements. Those who prefer being outside can opt for the cockpit lounge with its 180° view. Access to the swim area is facilitated by the cockpit gate opening onto the huge platform. The foredeck is accessible via side decks with no pulpit nor handrails – clean design isn’t always compatible with safety! The reward is to lie down on the large flush deck (not in navigation!). The cabins are all gathered belowdecks, as is the galley. The master cabin, with its large bathroom, is located forward and is adjacent to the crew cabin in the bow with two bunks and a direct access from the deck. The other two cabins, one with a double bed, the other with a single bed, each have their own wardrobe and bathroom. Perfect lacquers and chrome, furniture draped in dark leather, veined marble and blond wood panels… Contrasts punctuate the space and the finish is irreproachable.    We will leave the final words to Matteo Belardinelli, OTAM’s sales and communication director: “Our best business card is a sea trial!” We can only agree with him… 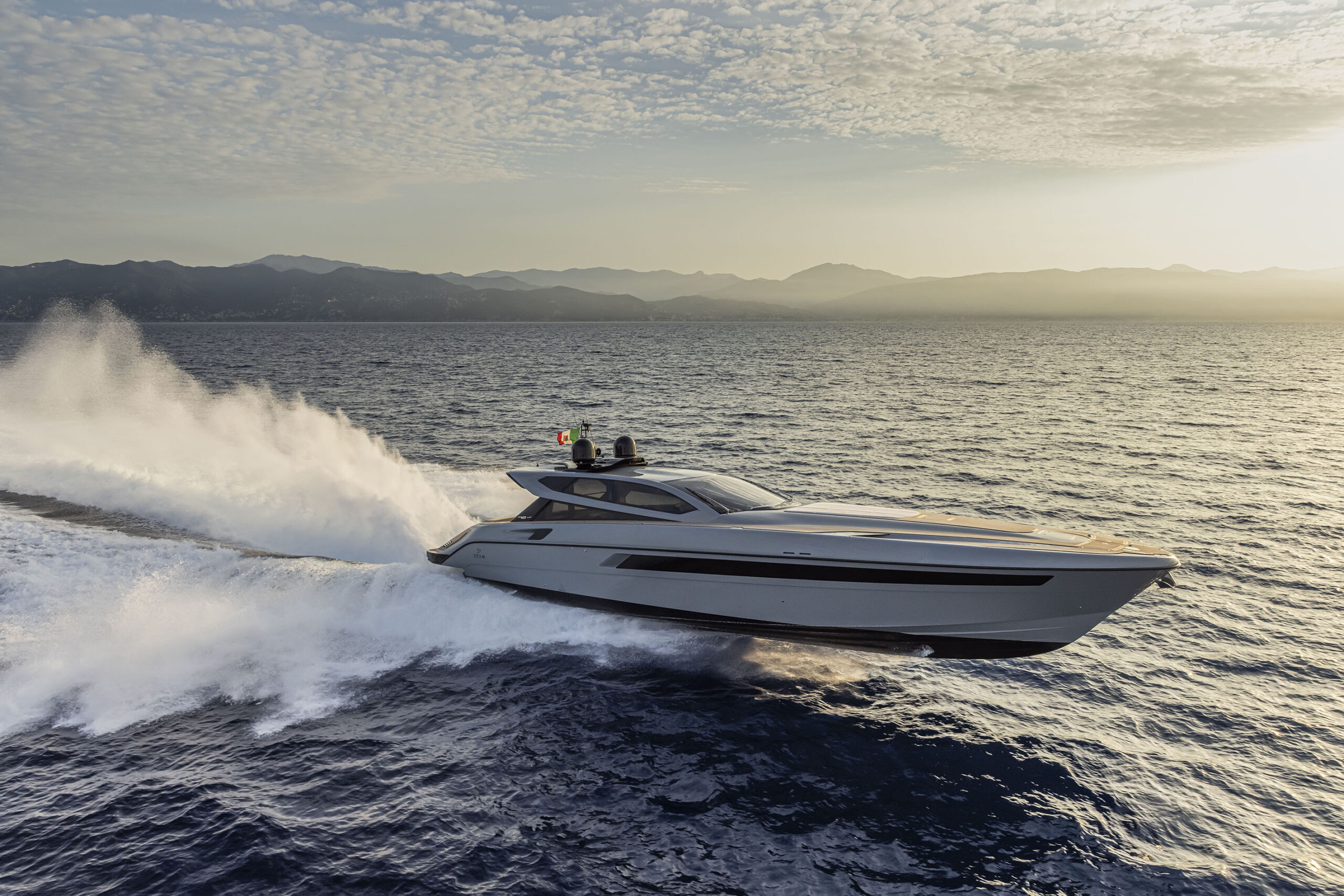 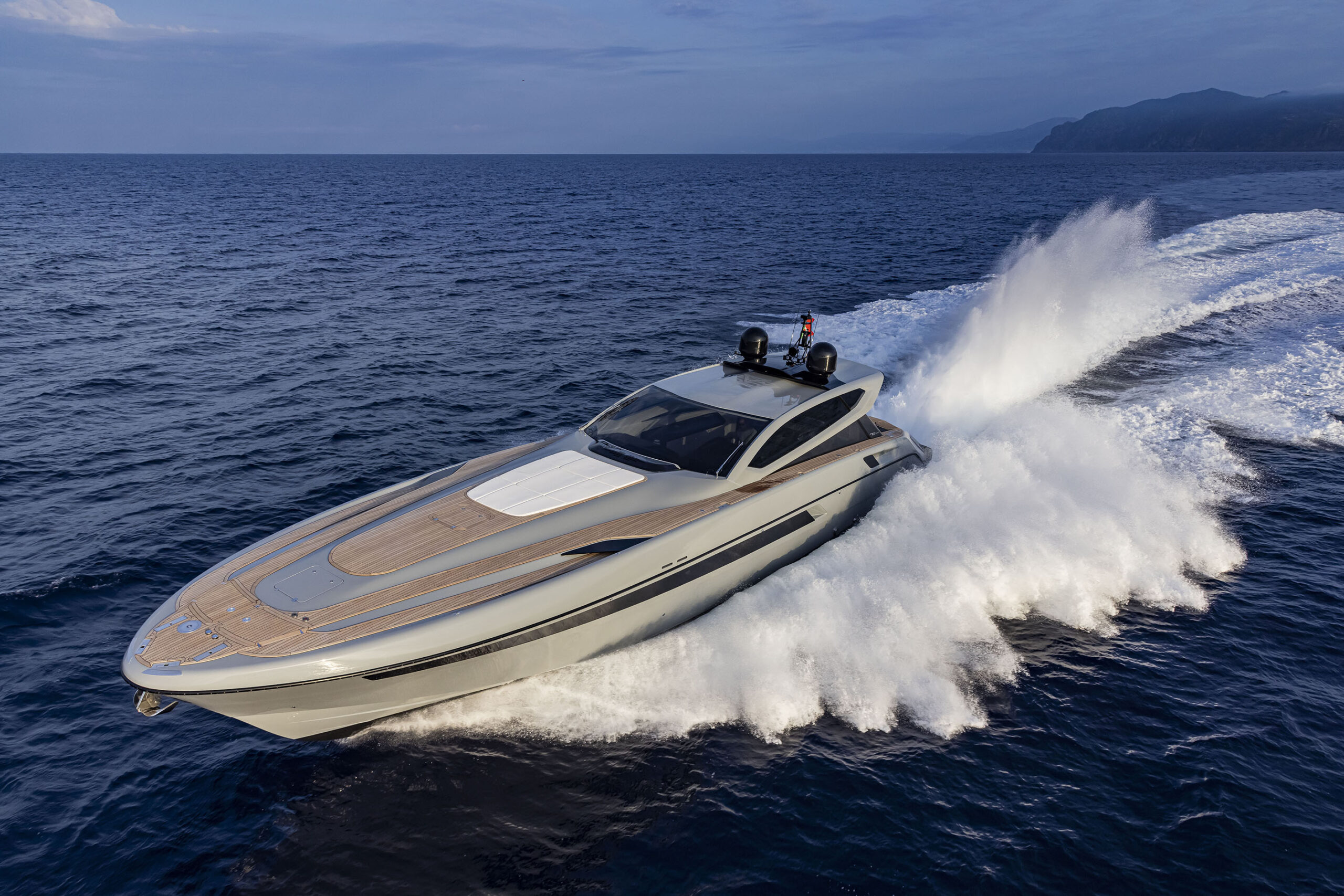 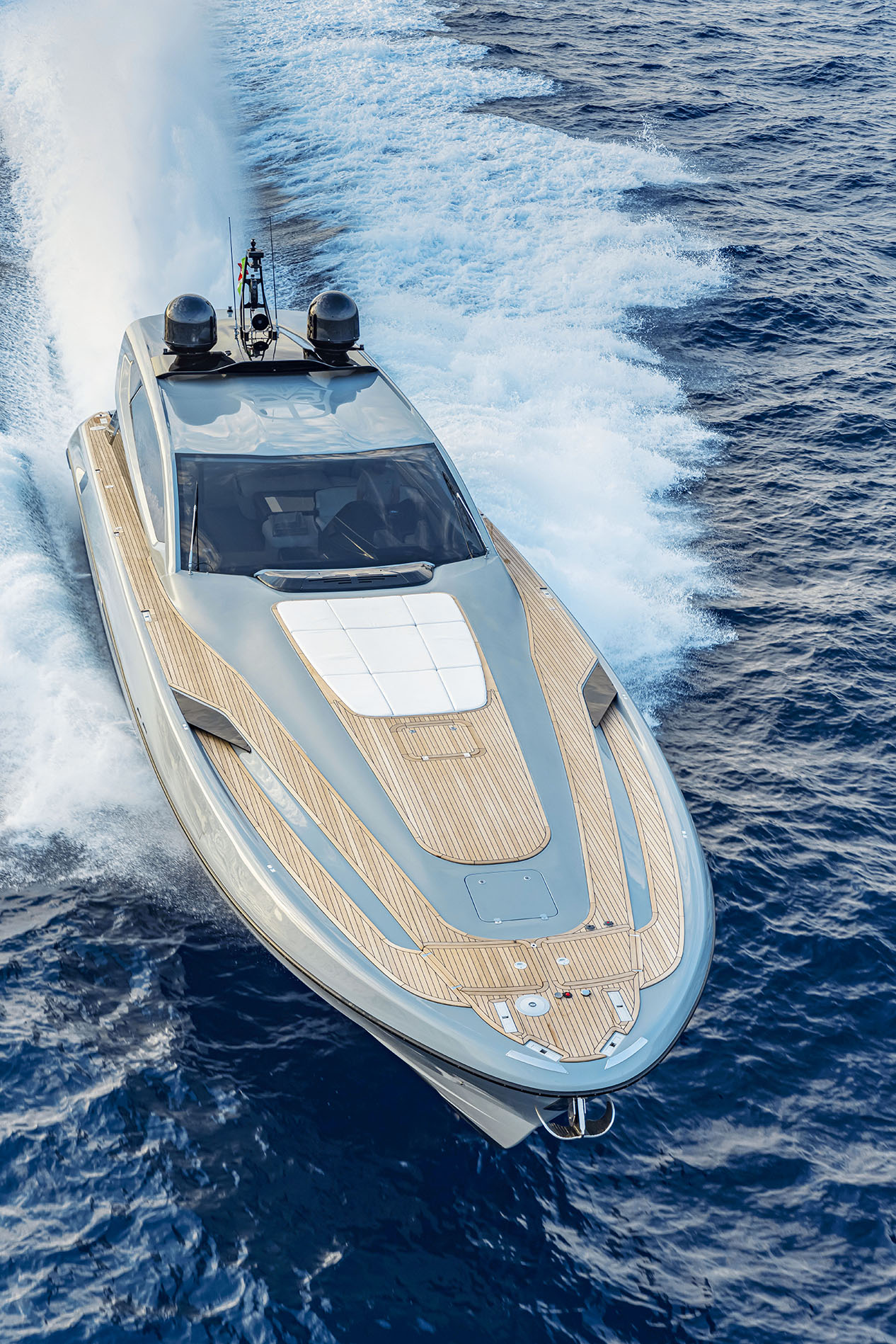 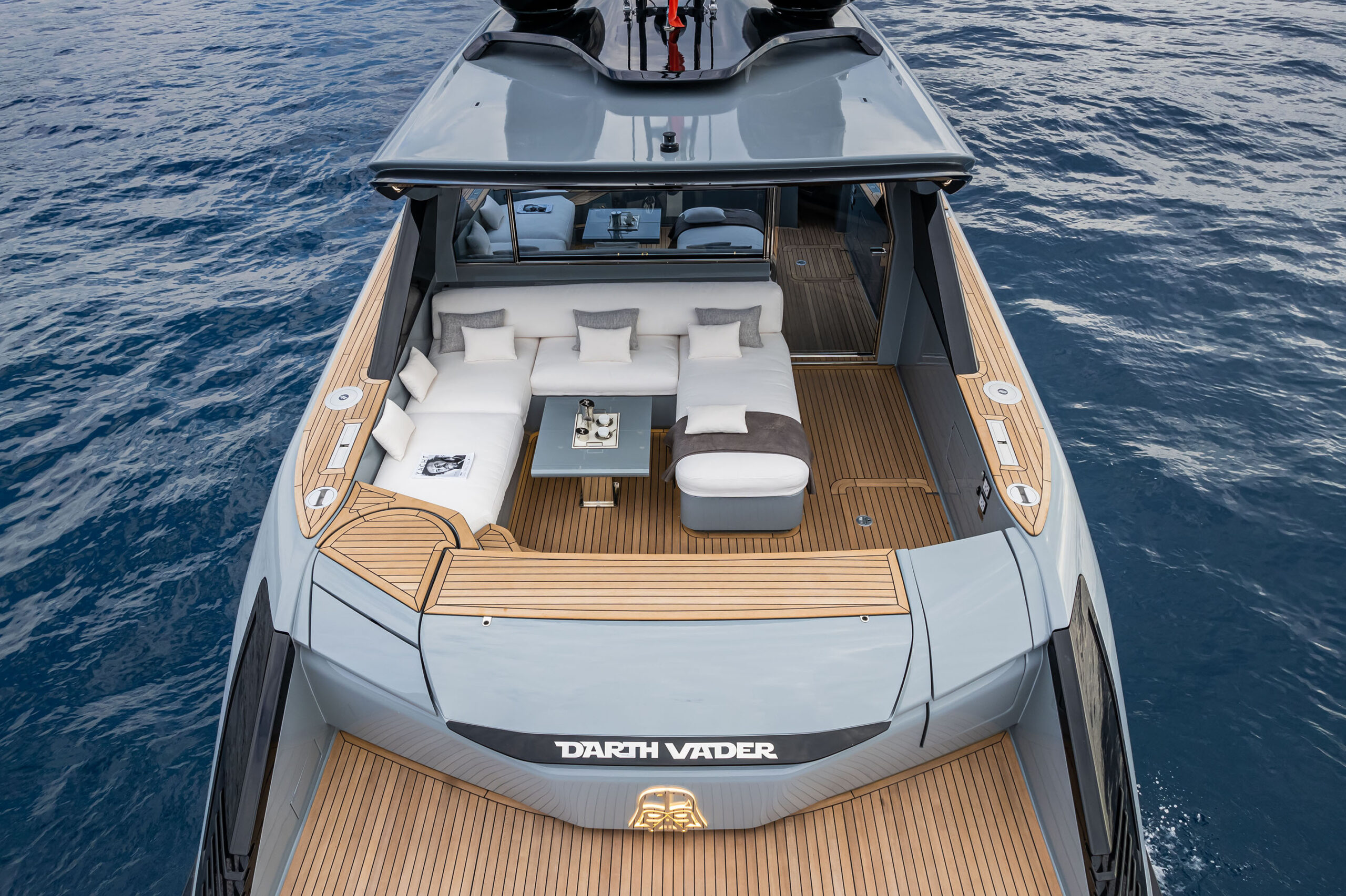 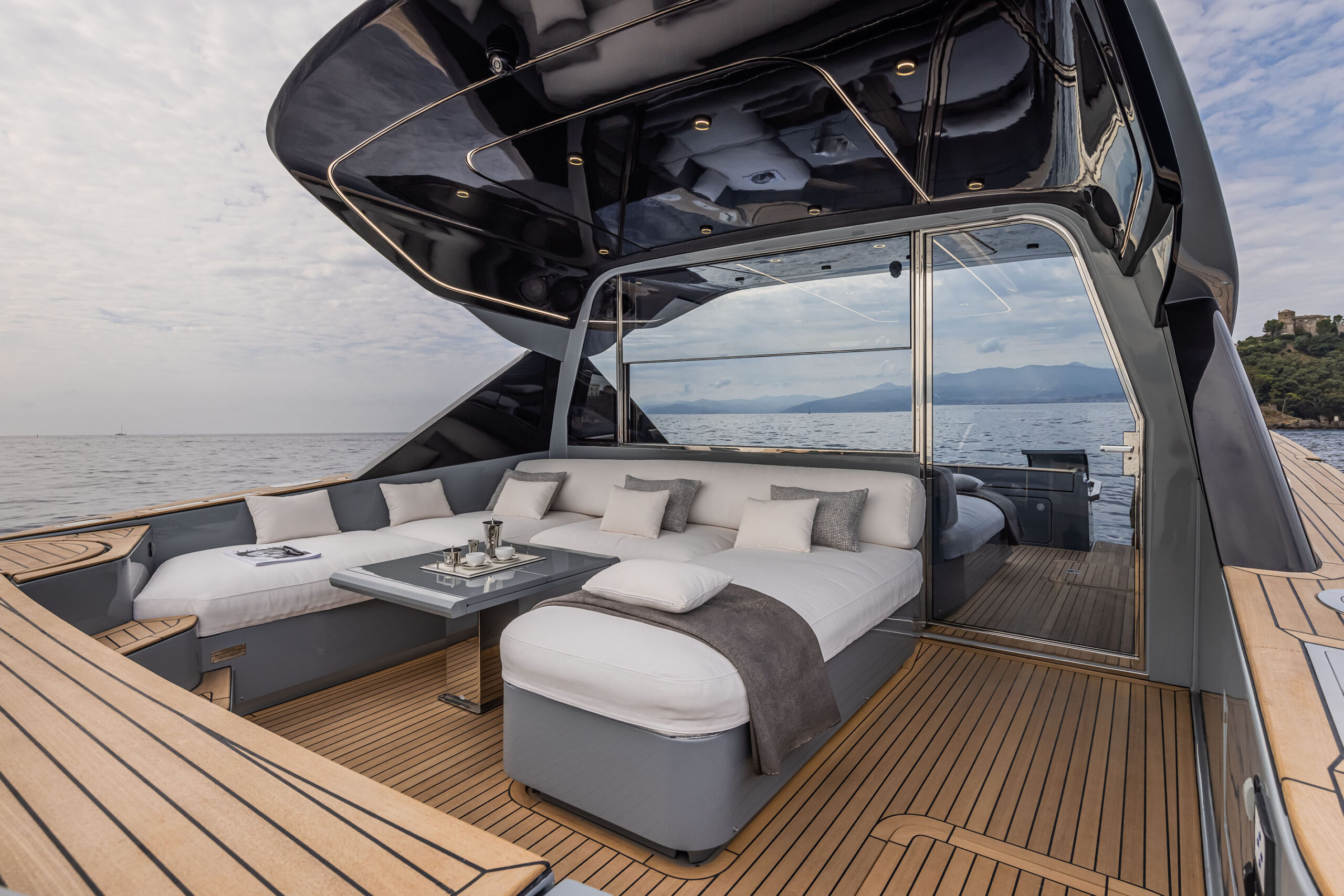 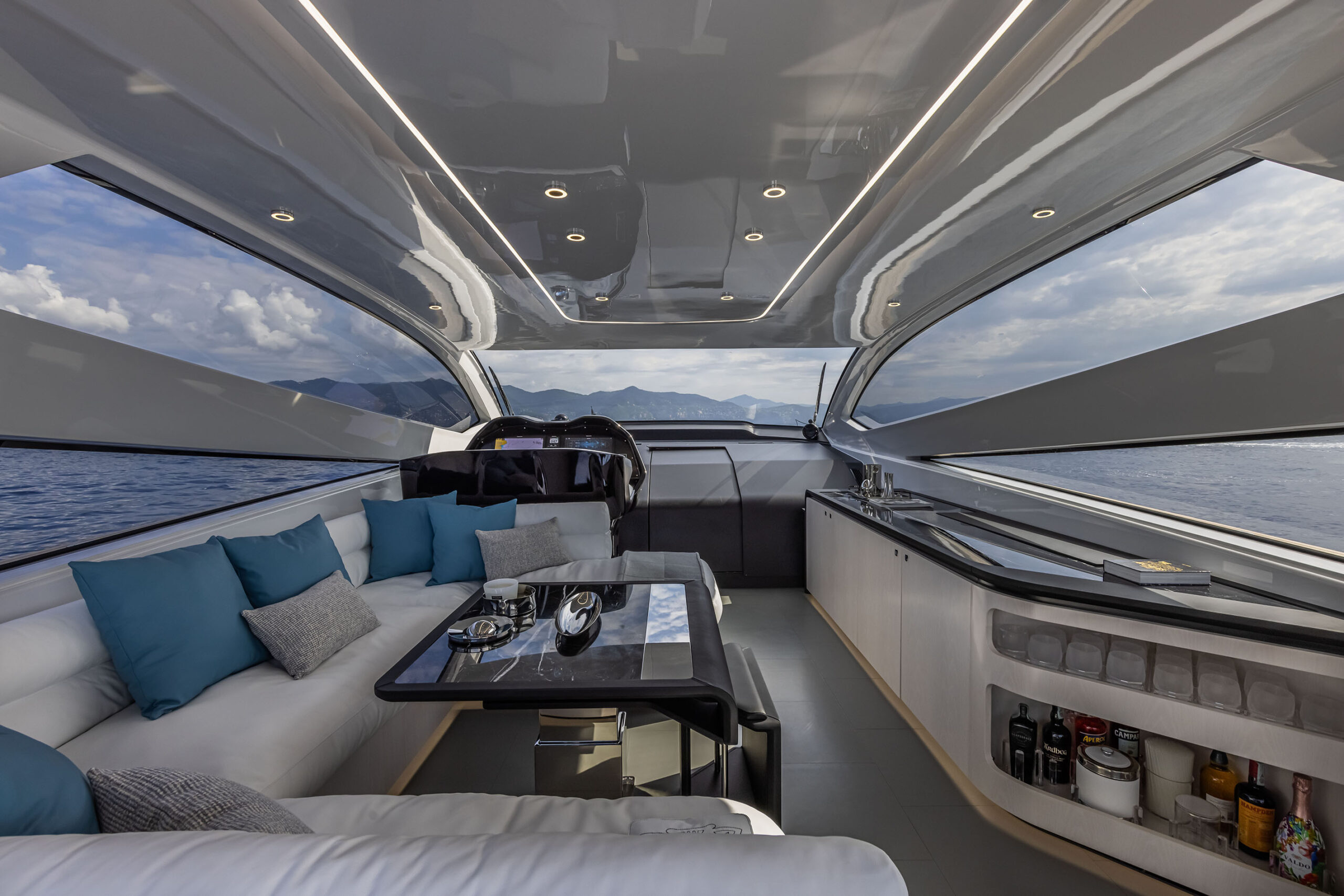 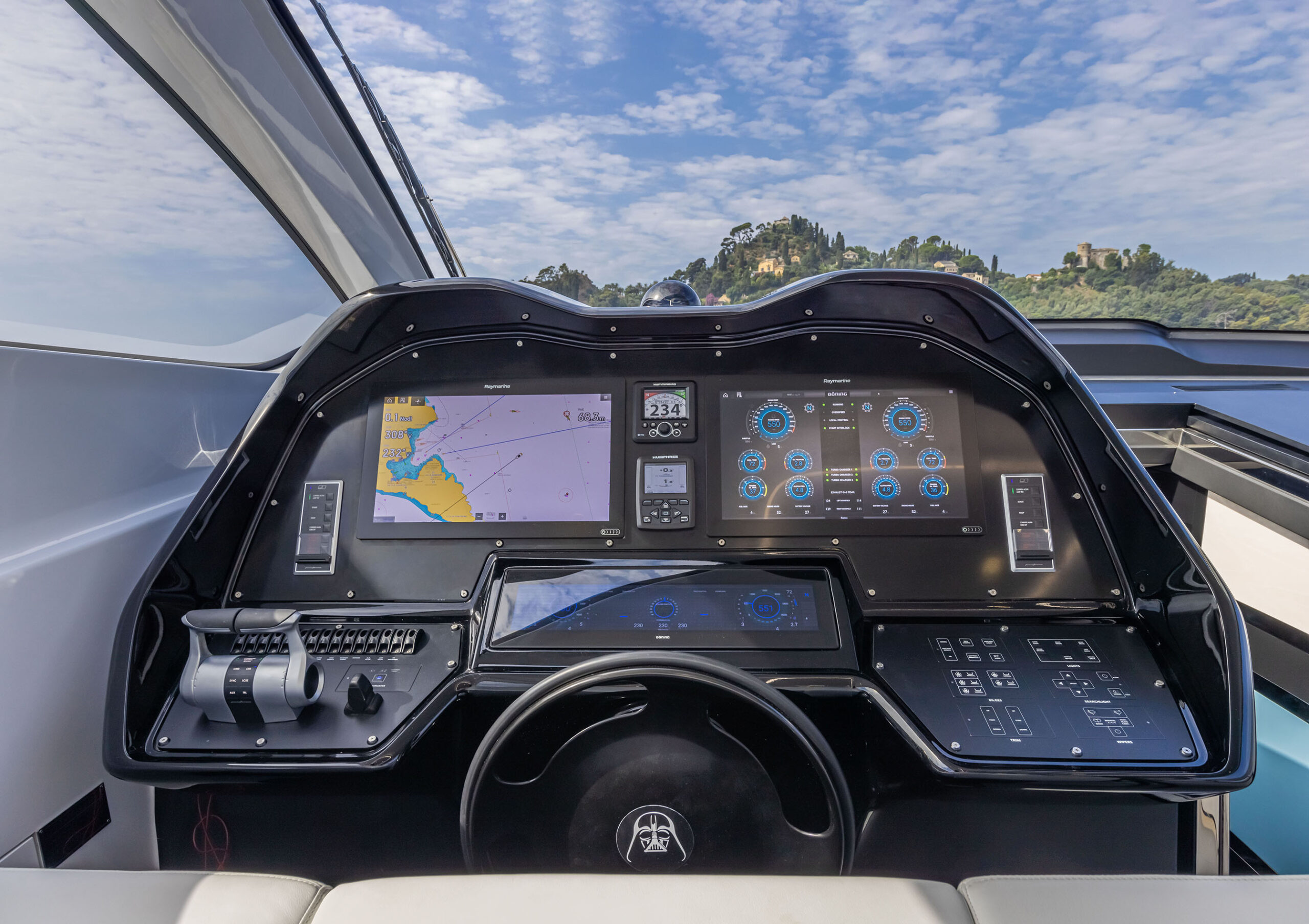 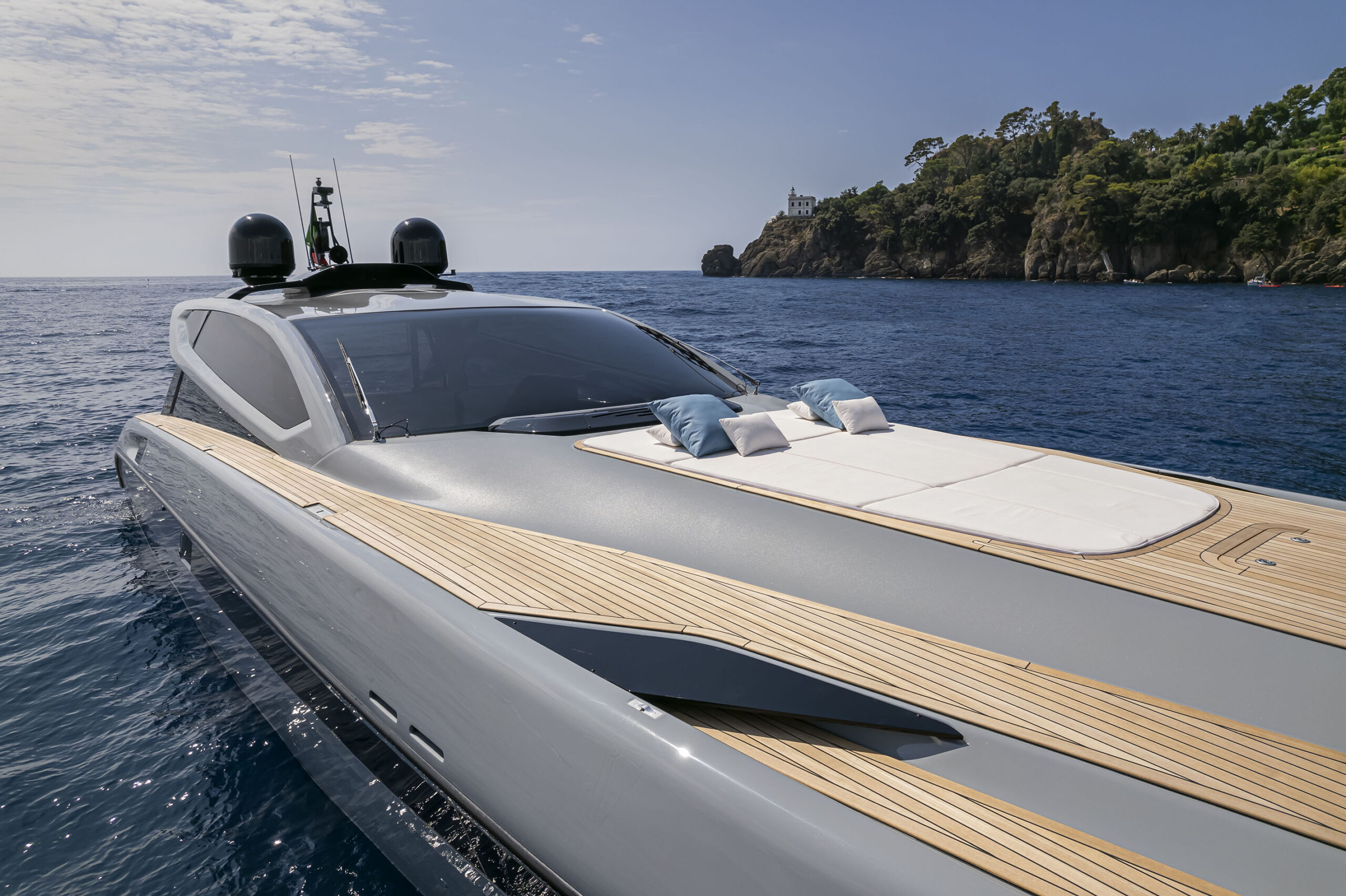 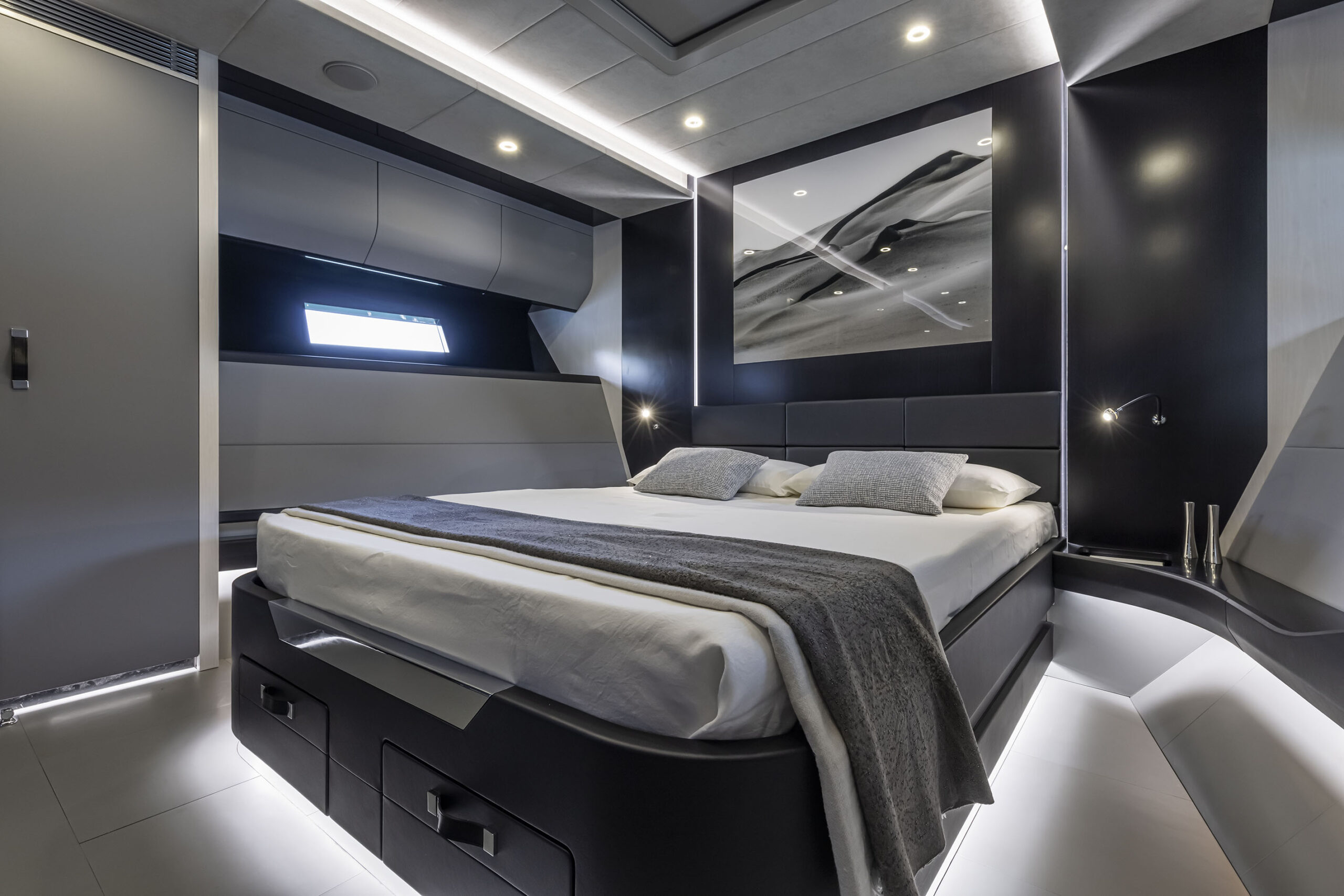 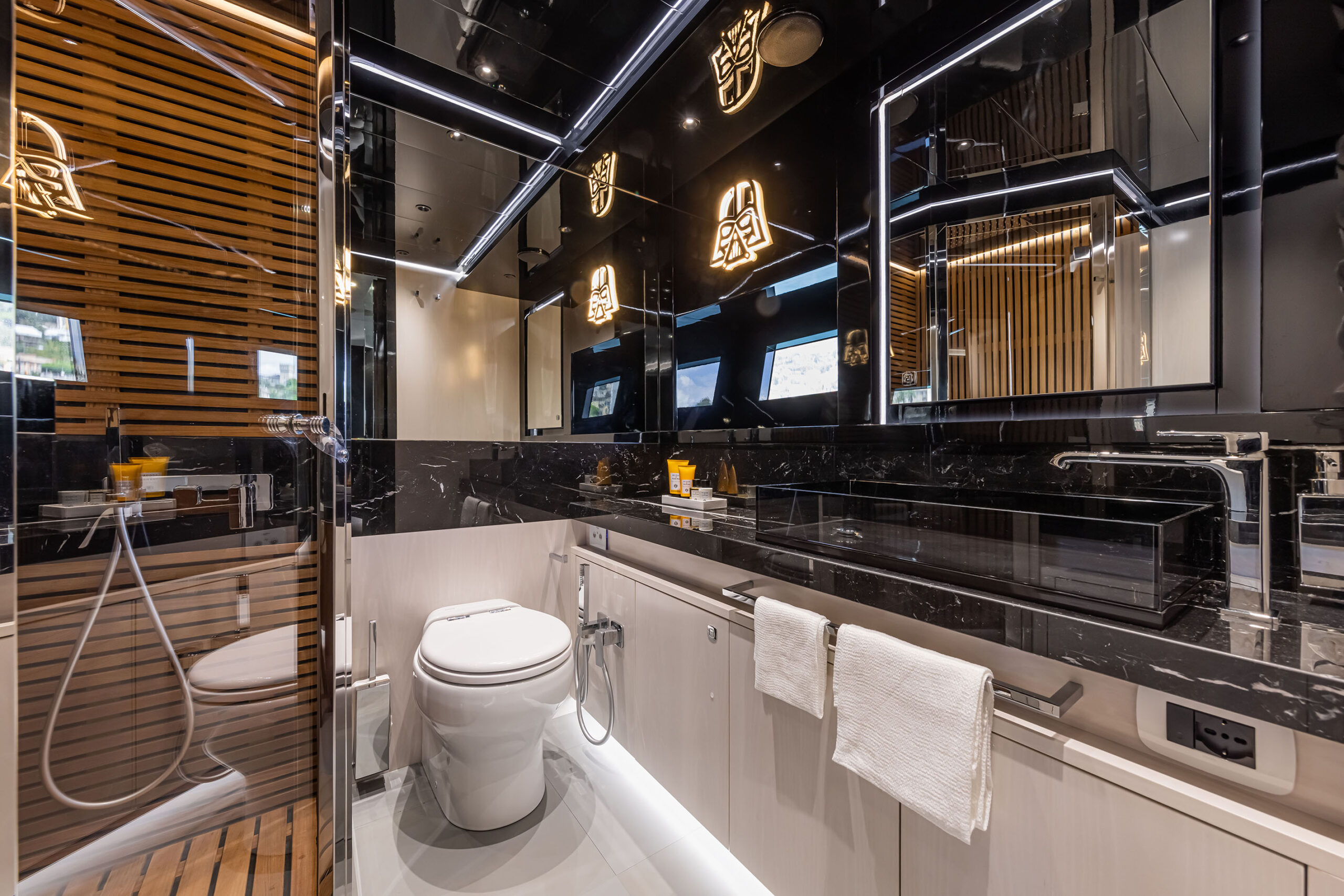 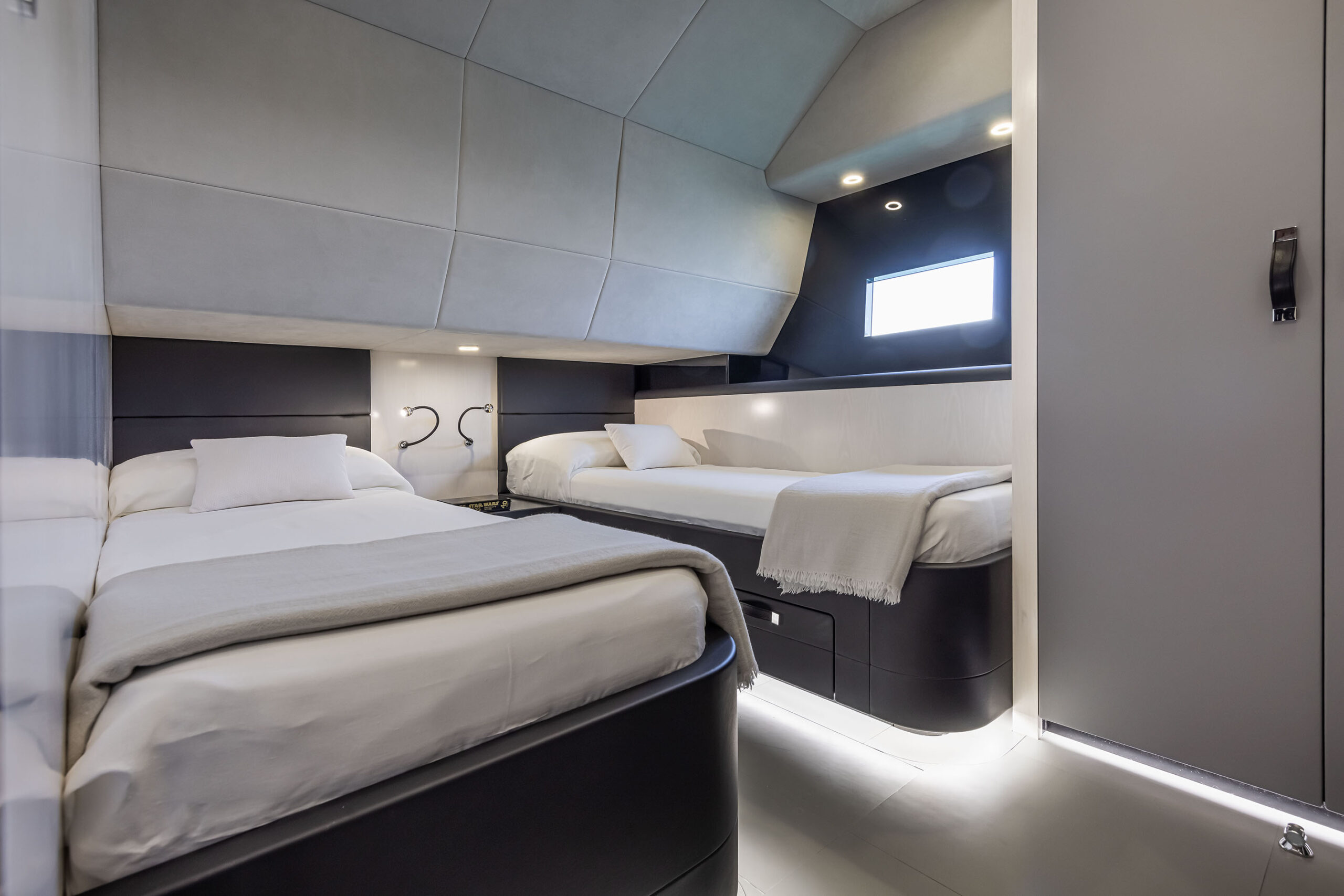 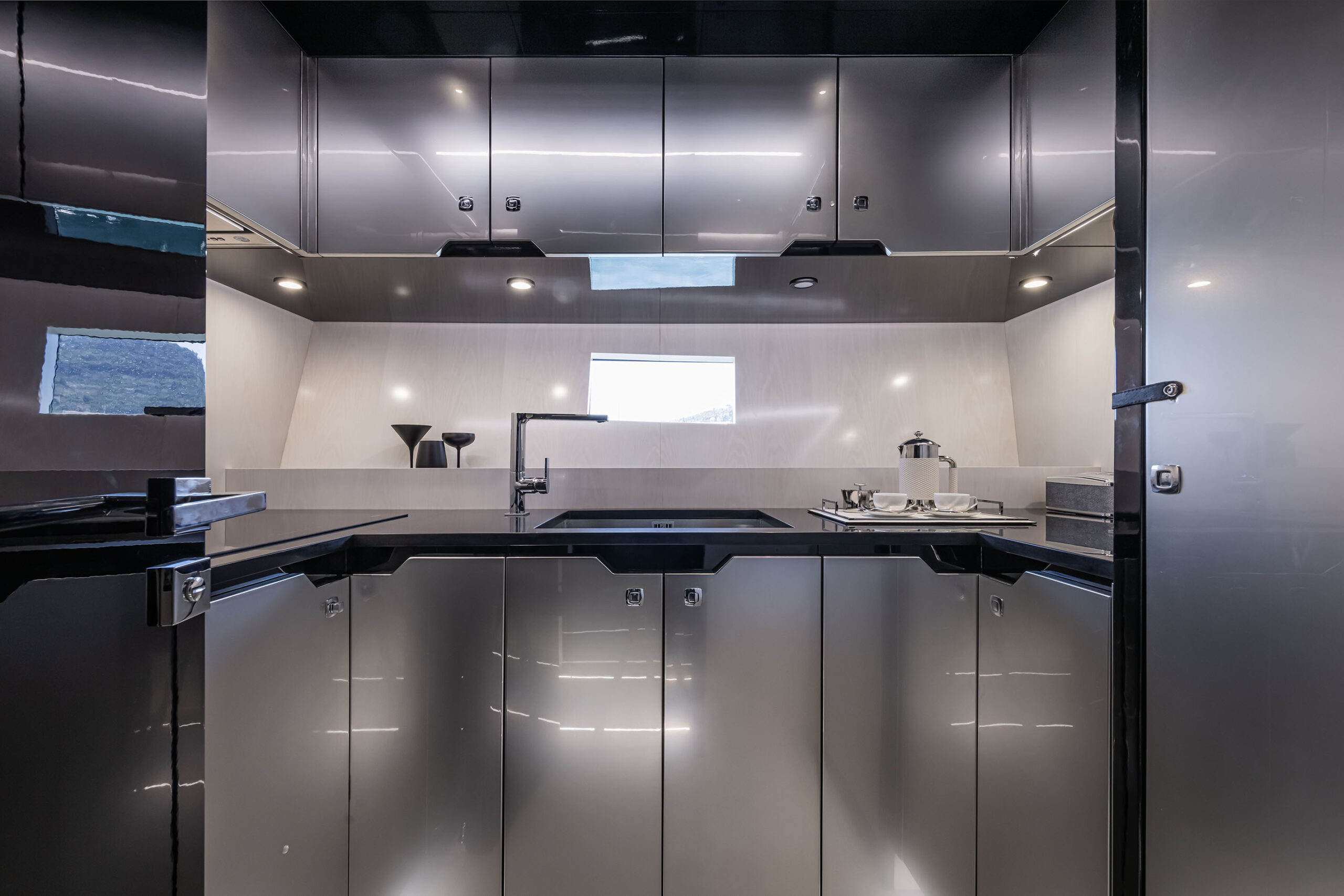 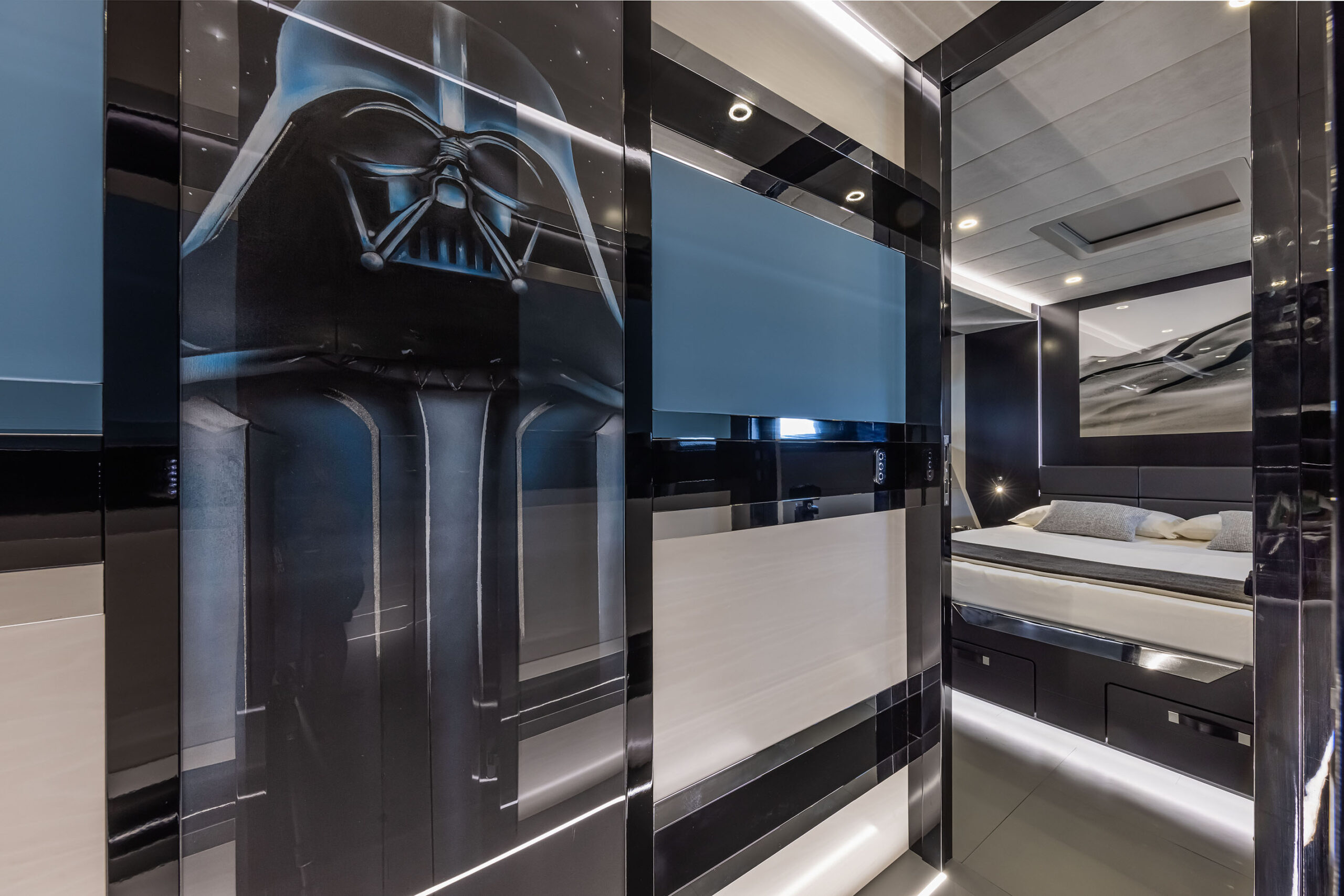