When sailing away from the wind, the boat goes beyond 11 knots

Neel Trimarans, one of the few specialized yards in three-hulled sailing ships, has presented the new generation of its flagship, the Neel 65 Evolution. Easy to manoeuvre, with high-performance in navigation, she offers innovative layout solutions, for the greatest comfort of her passengers.

The yachting market is very favourable to multihulls these days. Among them, catamarans claim the lion’s share. The trimaran market remains fairly limited, although the advocates of three-hulled sailing have an unwavering enthusiasm for them. Eric Bruneel is one of those. As a veteran, high-level catamaran sailor, he worked for many years for Fountaine Pajot, one of the world leading manufacturer of cruising catamarans. But at the same time, along with the architects Michel Joubert, Bernard Nivelt and Marc Lombard, this competitor designed the 50 foot trimaran Trilogic, aboard which he won the Transat in 2004, the 2005 Fastnet and placed second of its category in the 2006 Route du Rhum. “At each race, I arrived much less tired than my competitors on monohulls or catamarans. I thought I had to develop this concept for cruising”, Eric recalled. Neel Trimarans was founded in 2010 with development of the Neel 50 and the construction of the Neel 45 the following year. It was an immediate success. Then followed the Neel 65, then the Neel 51. The Neel 65 Evolution marks the arrival of the new generation. She will be followed by the 47, which replaces the 45. Today, La Rochelle-based Neel Trimaran disposes of 5 000 m2 facilities where 25 boats a year can be built. But now, let’s set sail on the Mediterranean to test this 65 Evolution.

Off La Grande Motte, the Gulf of Lion offered us spring-like conditions for our sea trial of the Neel 65 Evolution: a clear sky, a steady southwest breeze of 20 knots established. With three people on board, assisted by a 150 hp Volvo and a bow thruster, port maneuvering was no problem. On the flybridge, the crew hoisted the sail, as all the lines are led near the steering positions. In these wind conditions, Eric Bruneel decided to reef the mail and unfurl the staysail, which was quite simple thanks to the electric winch and four manual ones. With his wife Barbara, everyone knew what they had to do. And almost without a word, the sail was set, the engine shut off and the Neel 65 Evolution started her powerful and quiet glide. With an angle of 60° to the wind, the speed varied between 8 and 10 knots, each reef causing a significant acceleration. By slightly opening the angle, the boat accelerated and displayed performance above 11 knots, with a most reassuring behaviour. Under staysail, tacks easily followed one another; under genoa, it will be probably preferable to furl it in a little for easy passage that does not require a crewman to go on the foredeck. The navigation ended with the wind gradually easing off. Comfort on board was appreciable, with a slight rocker when the boats turned or gybed. She naturally comes to rest on the leeward hull before regaining speed, the windward hull intermittently skimming the water surface. As the largest masses are mainly located in the main hull amidships, low enough to lower the centre of gravity, she has a smooth and efficient behaviour, even in a choppy sea.

A dining area for ten!

The journey back to the port gave us the opportunity to visit the Neel 65 Evolution, starting with the stern. Access is via the central hull, which features a larger skirt and opens onto a tender garage (up to 3.80m). The lateral skirts feature huge self-bailing compartment for kayaks. The cockpit is spacious thanks to the shipyard designers, who managed to create a nacelle connecting the three hulls. There is a saloon with a table on starboard, a staircase leading to the flybridge on portside. This beautiful terrace accommodates a lounge that can serve as a sunbed, a dining area with two tables, plus two steering positions, well-equipped with electronic equipment. They both have all the engine control, which is quite handy for mooring to port or to starboard side. The foredeck has no real spot for relaxation, but at anchor, it will be the perfect location for a sunbathing mattress. Visiting the interiors reveals many surprises, including the beautiful merger of the cockpit and the saloon – the cockloon – a concept developed with the designer Franck Darnet. Thanks to a wide sliding glass windows, one goes from one space to the other without realizing it. The saloon looks like a modern loft with, forward a saloon and a coffee table, a dining area for 10, which becomes a huge sofa to lie down in front of the tv, plus a well-equipped galley separated from the saloon by a contemporary glass windows. Forward, the portside accommodates the helm station, right next to the door of a beautiful master cabin on the same level. It features a huge bed pressed against a panoramic bay window, plus an en suite with sink, separate shower stall and toilet

The yard remains open to customization

Guest were not left and will be housed in three beautiful double cabins with en suite. Those in the lateral hulls are like long small suites, while the one the central hull has a nice volume. There is also an amidships crew cabin belowdecks, with a toilet and an access to a technical area, where can be installed, for example, washing machine. Particular attention has been paid to the construction and the materials selected meets every requirement for aesthetics and functionality: synthetic marine teak deck, titanium coated aluminum stanchions and the lifeline fabrics with reflective light points. The interiors feature alpi wood and the synthetic seagrass flooring. Every Neel 65 Evolution can be customized to some extent, such as, for example, to fit solar panels. But the objective always remains the same: to give the opportunity to long, fast cruises without sacrificing comfort. 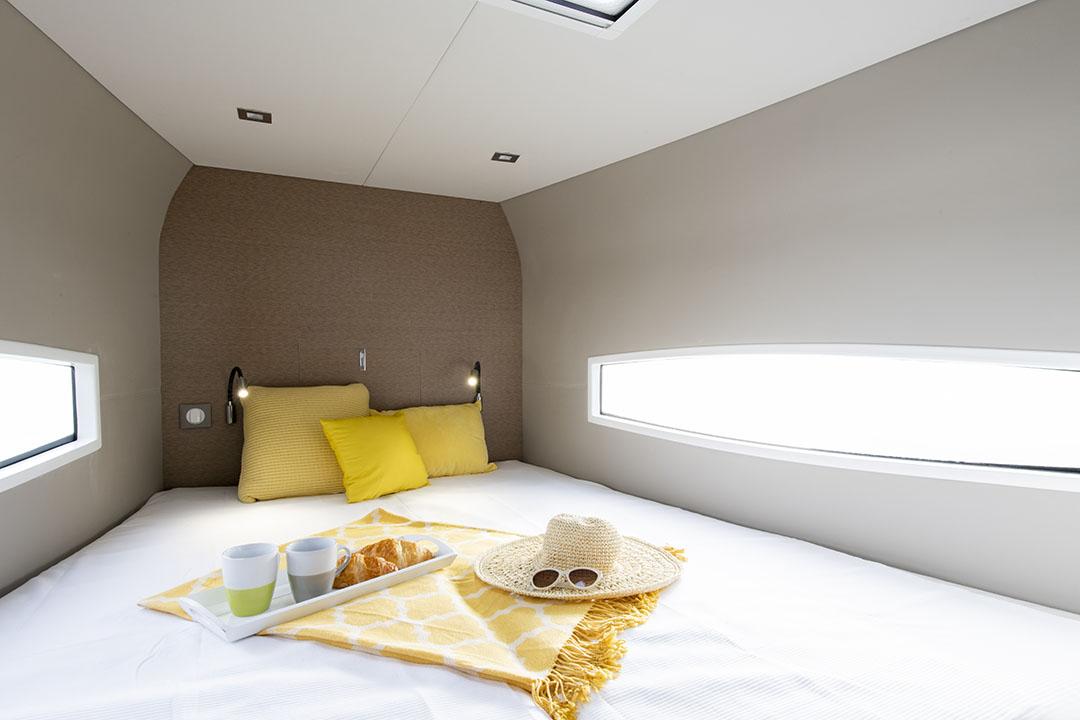 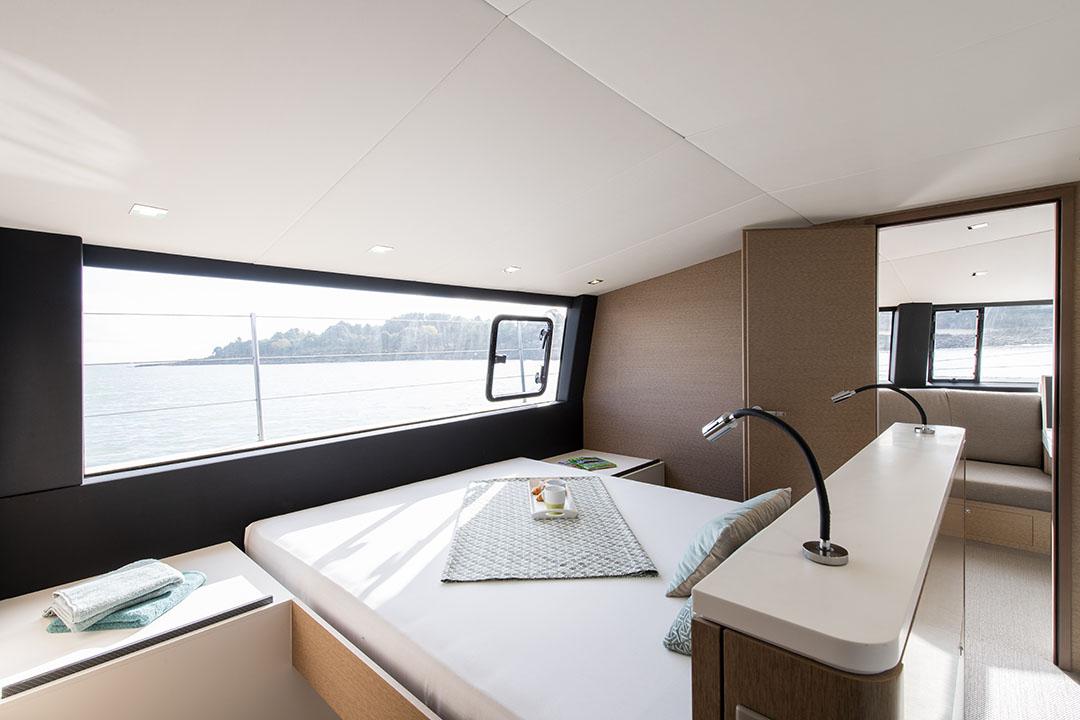 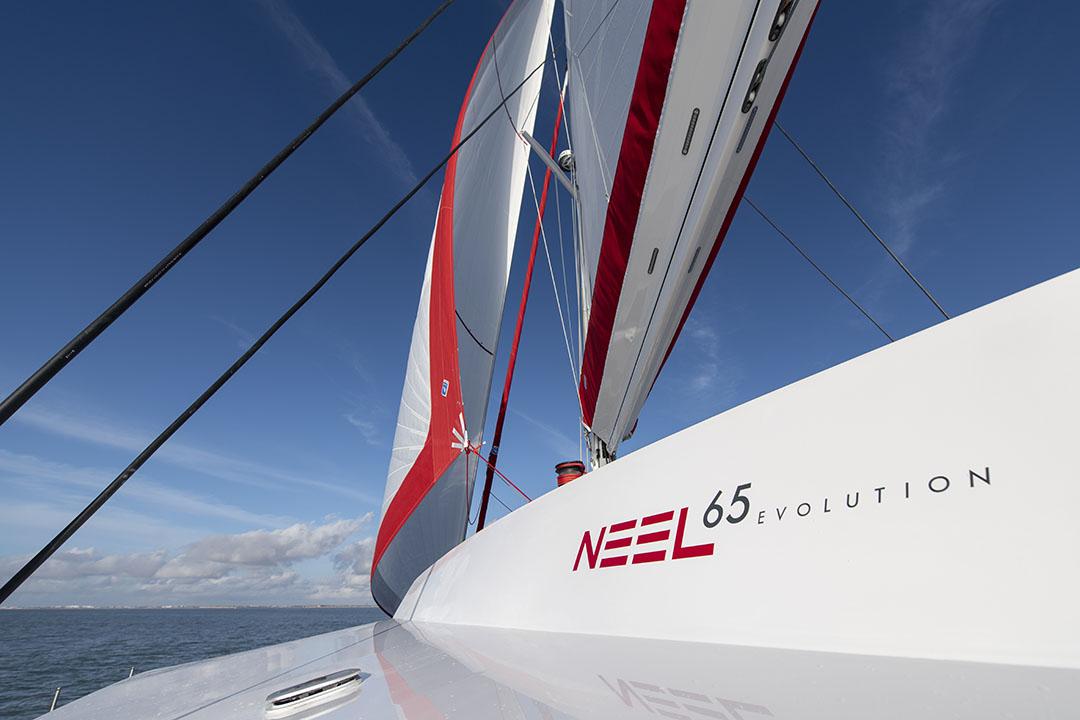 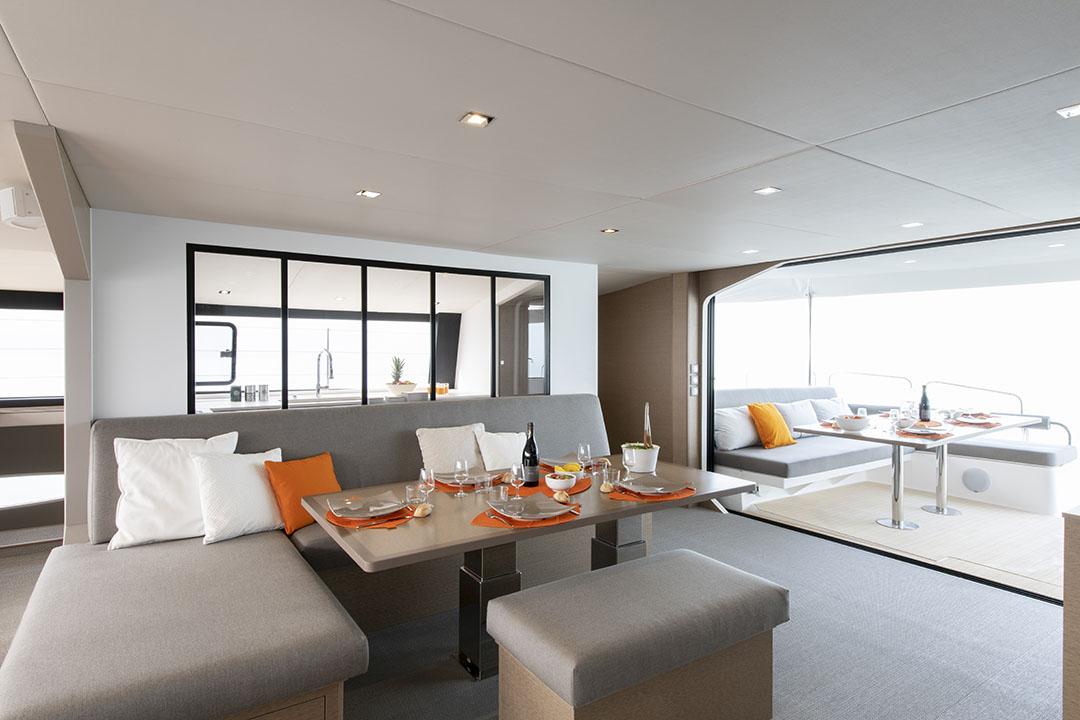 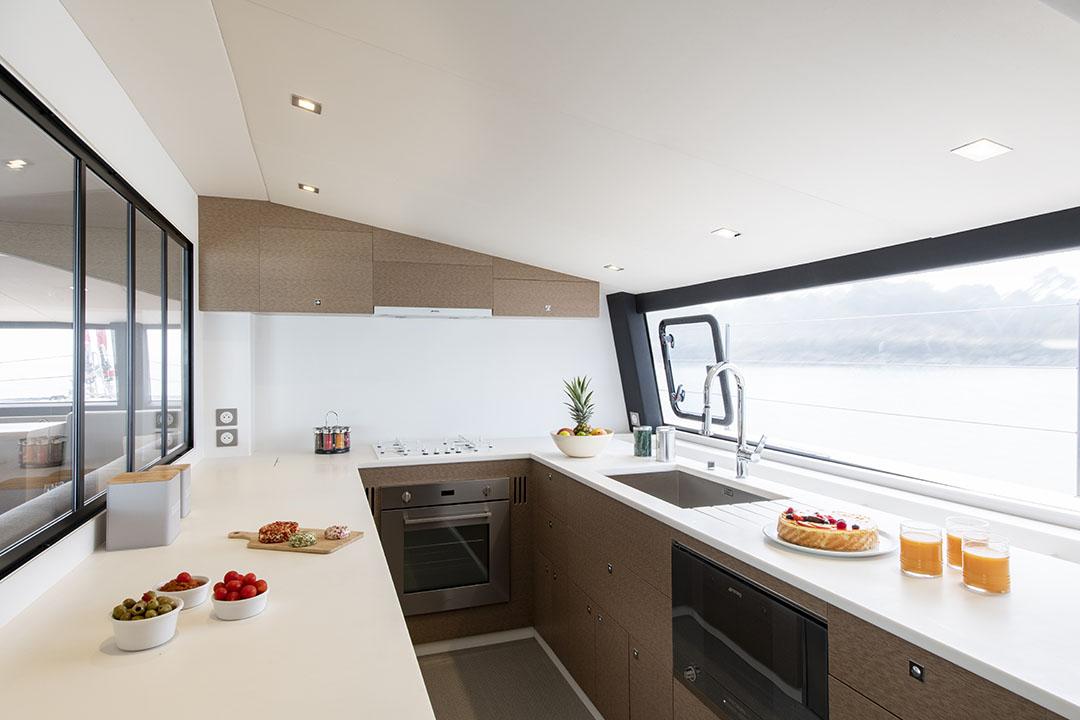 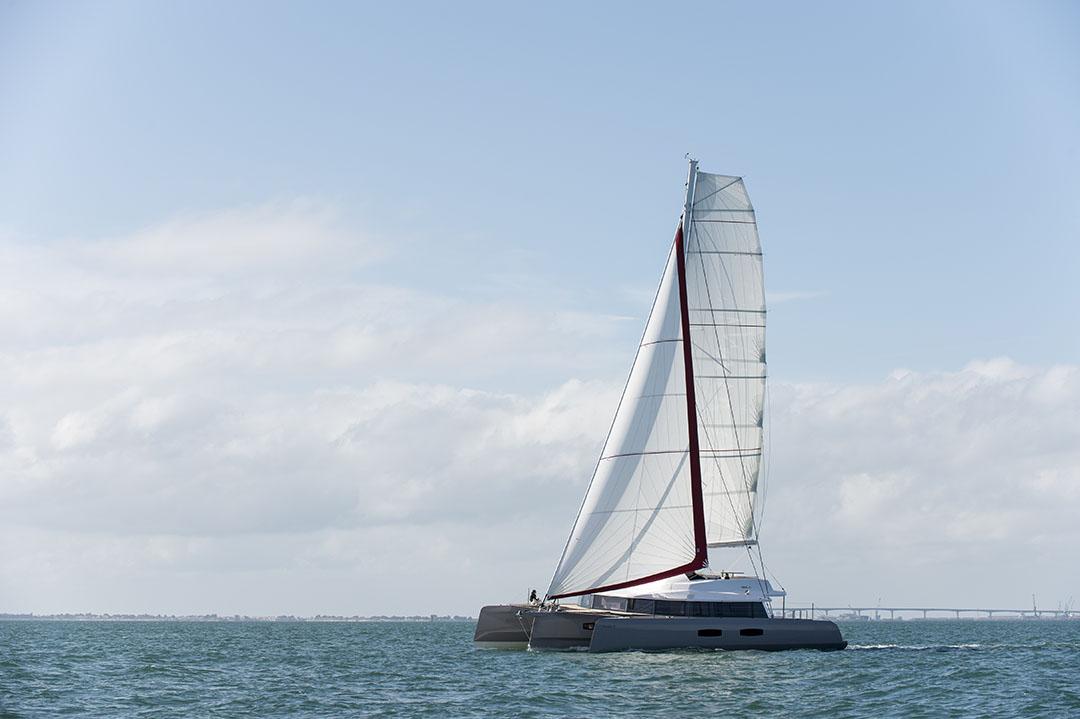 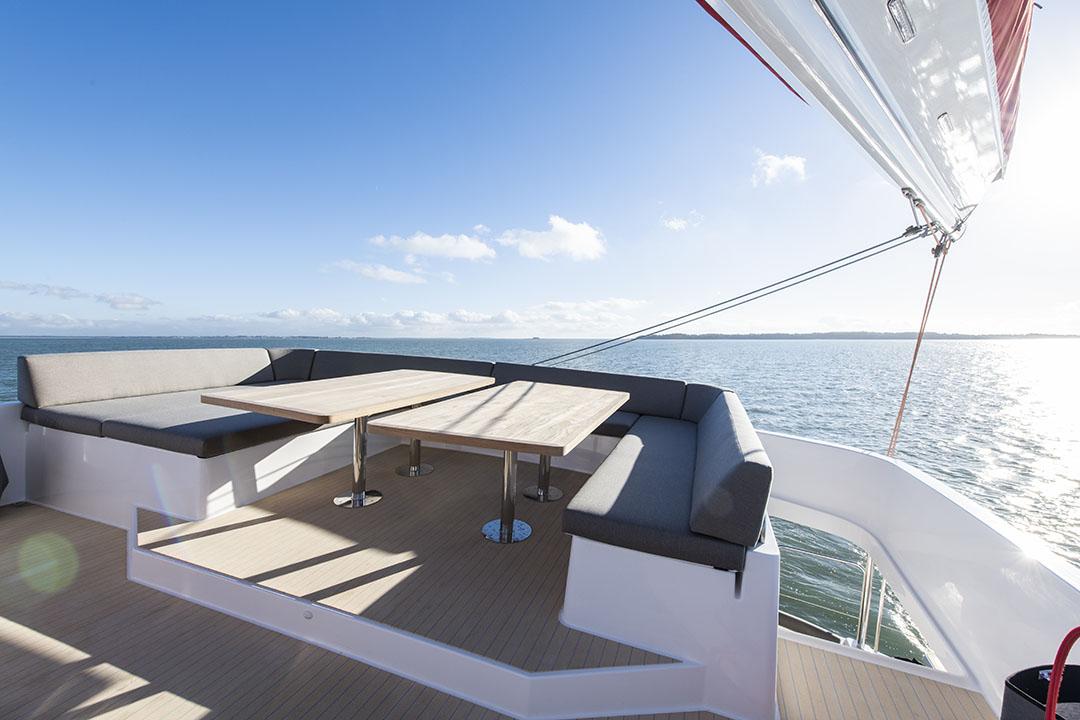 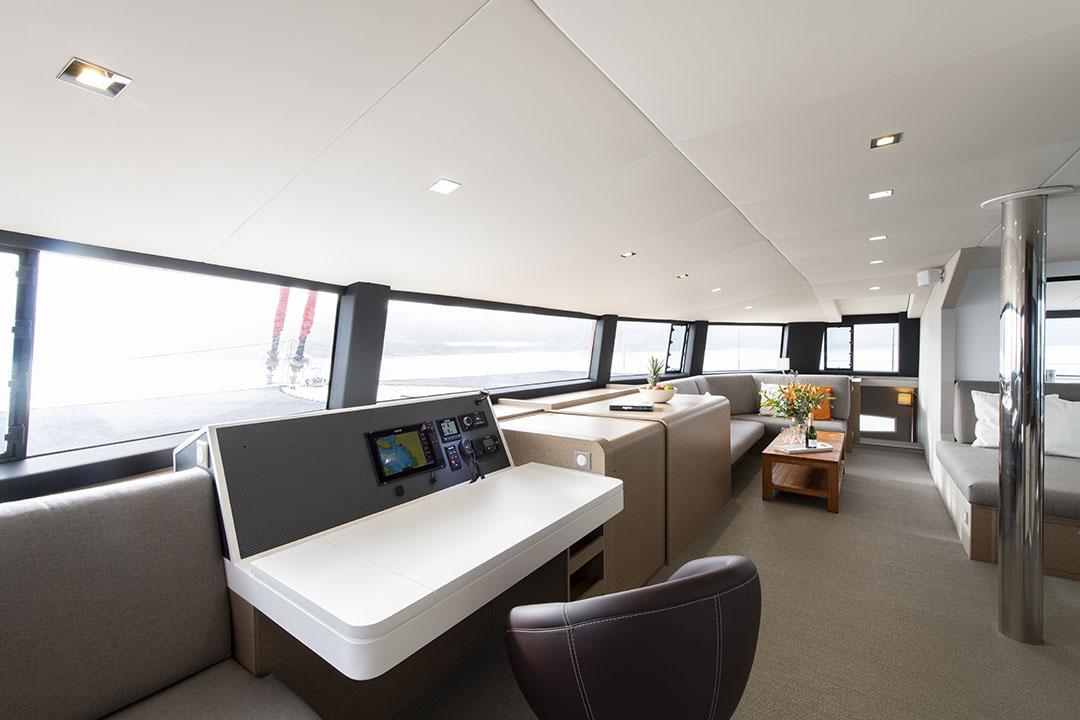 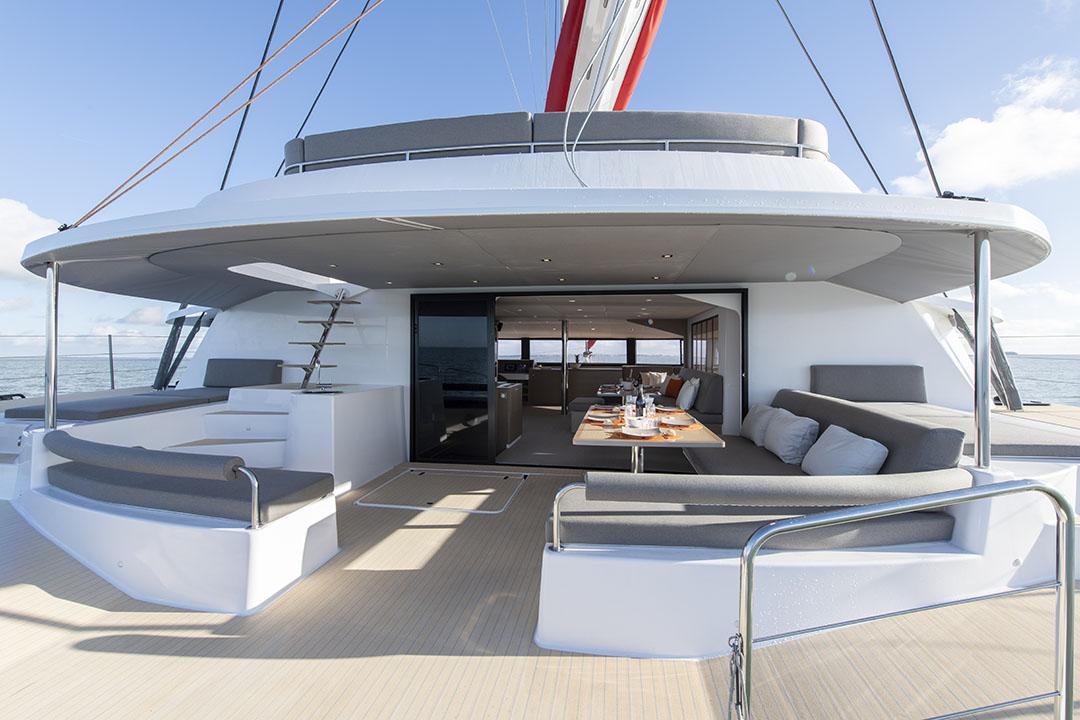 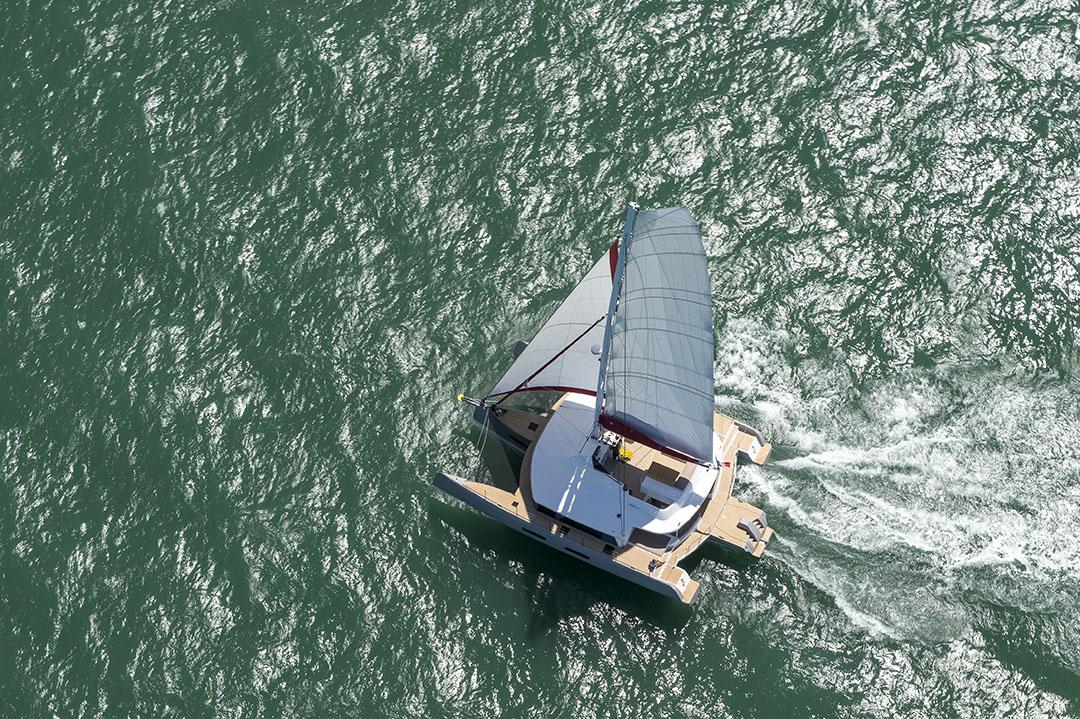