With an increased sail plan, the new generation of Nautitech offers improved performance and helming sensations.

After reverting back to its original name, the French yard Nautitech took the opportunity to usher in a new era. While improving helming sensations, the Nautitech 46 Open offers a modernized design with a layout that promote space for greater comfort.

Weather is always an unpredictable element when planning an outing on a sailboat. When there is not enough wind, the boat will only highlight the comfort on board without revealing anything about sailing performance. And an excessive breeze provides an opportunity to assess the behaviour in rough seas, without enjoying the valuable moments of relaxation. So, when the forecast announces 15 knots of wind easing off at 10 knots, the scheduled sea trip during the latest Cannes Yachting Festival on the brand new Nautitech takes all its meaning… Leaving in Port Canto and its new dedicated sailing area – which offered more space and visibility for the exhibited boats – was smooth, all the more so since the maneuvers were facilitated by the two engines and their spacing (the assets of catamarans). Acquired by the German Bavaria in 2014 and then renamed Bavaria Catamarans, the French shipyard Nautitech took back its original name in 2019 after the German group was overtaken by an investment fund. Launched in Cannes, the new Nautitech 46 (Open & Fly versions) opens up a new era, characterized by a modernized visual identity, a remodeled team and relooked models. Compared to the 46 of the previous generation, she features an improved rig with a longer mast and a lowered boom, increasing the mainsail area of 2m2 : for her creators, the Nautitech 46 Open should provide more helming sensations, without neglecting comfort and pleasure qualities. The design has also been modernized. She features a more discreet two-tone deckhouse and it is amazing how a simple shade of light grey can change the perception of volumes. Similarly, the narrow hulls, inverted bows, the development of volumes above the waterline and the long hull portholes all give the Nautitech 46 a sporty and elegant silhouette.

A dynamic and comfortable sailing philosophy

Once in the bay, the crew effortlessly hoisted the mainsail, thanks to the halyard electric winch, and, since the sailing trim was appropriate, a Code 0 was unfurled in a few seconds. She can also be single-handed, since all the lines are led to the starboard steering position. To maintain a dynamic and comfortable sailing philosophy, the yard opted for two navigation stations in lieu of a single raised station: whatever the speed or wind conditions, the helmsman always has a good visibility on the sails. Taking advantage of the 15 knots quartering tailwind, the Nautitech 46 Open reached a speed close to 9 knots with a soft, but above all sensitive and precise helm. When the wind eased off, the boat’s speed was still appreciable, remaining often between 7.5 and 8 knots. Then, of course, when the time had come to head back to the marina, sailing upwind required to replace the Code 0 by the self-tacking jib, with an immediate impact on performance. After rolling up the jib and before entering Port Canto, the few steps located forward the deckhouse allowed to reach the boom, whose lowered position ensures an easy and effective stowing away of the mainsail.

Once moored, a tour of the foredeck gave us the opportunity to admire the ingenious layout of the nacelle. A row of large stowage lockers can be used to store fenders, mooring ropes and all sorts of equipment, but it is mainly the two settees at the rear of the trampoline, which can be transformed into a sunbathing area by adding cushions, that catch the eye and arouse envy: at sea or at anchor, this spot offers a wonderful panorama. At the stern, the cockpit is protected by the deckhouse, but a large porthole lets the light illuminate this space and allows the helmsman to control the mainsail trim. An aft settee and two side seats offer a pleasant saloon while a starboard table accommodates eight for convivial dinners. From there, the two skirts feature a few stairs, concealing storage spaces, for easy access to the sea.

The saloon is accessible via a large sliding bay window. The-equipped galley, connecting the cockpit and the saloon, is clearly visible and features spacious worktops with small fiddles. The forward part features a saloon on portside with a coffee table with flaps that can be raised and folded out to offer an indoor dining table. On starboard, a new chart table allows to study the navigation in the best conditions. Overall, storage volumes have been increased. Similarly, the four skylights, offering a view on the sails, contributes to sublimate the place. On each side, small companionways lead to the cabins. The Nautitech 46 Open is available in three- and four-cabin layouts. In the first version, the master suite is located in the port hull with, from aft to forward, a large double bed, a salon/office area, storage space with wardrobe, toilet and finally a beautiful head with double washbasin and shower stall. The other hull features two double guest cabins, with head (toilet and shower). Everywhere, lighting hidden in the ceiling diffuses a soft indirect lighting, which, combined with the dark woodwork, contributes to create a warm atmosphere. This Nautitech 46 new generation also exists with a flybridge, which involves two major layout changes: the two steering positions gives way to a high navigation station and a saloon-terrace, and the boom is higher hence a reduced sail area. Owners will opt for one or the other solution, depending on their sailing programme, with always a search for the subtle compromise between performance and comfort or comfort and performance. 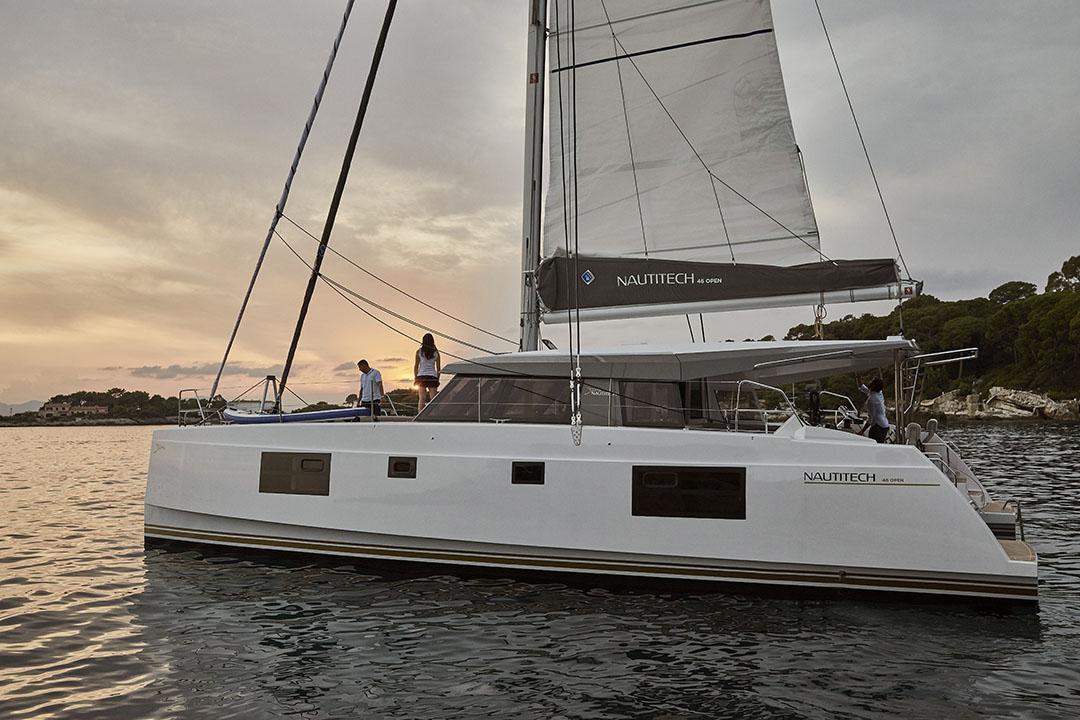 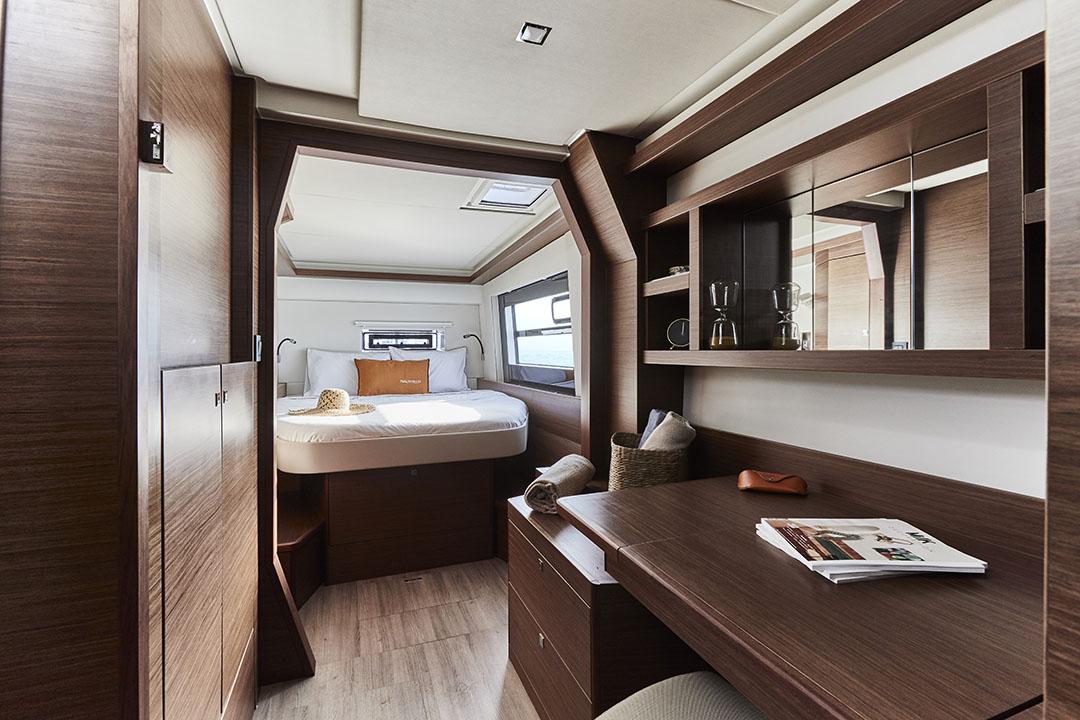 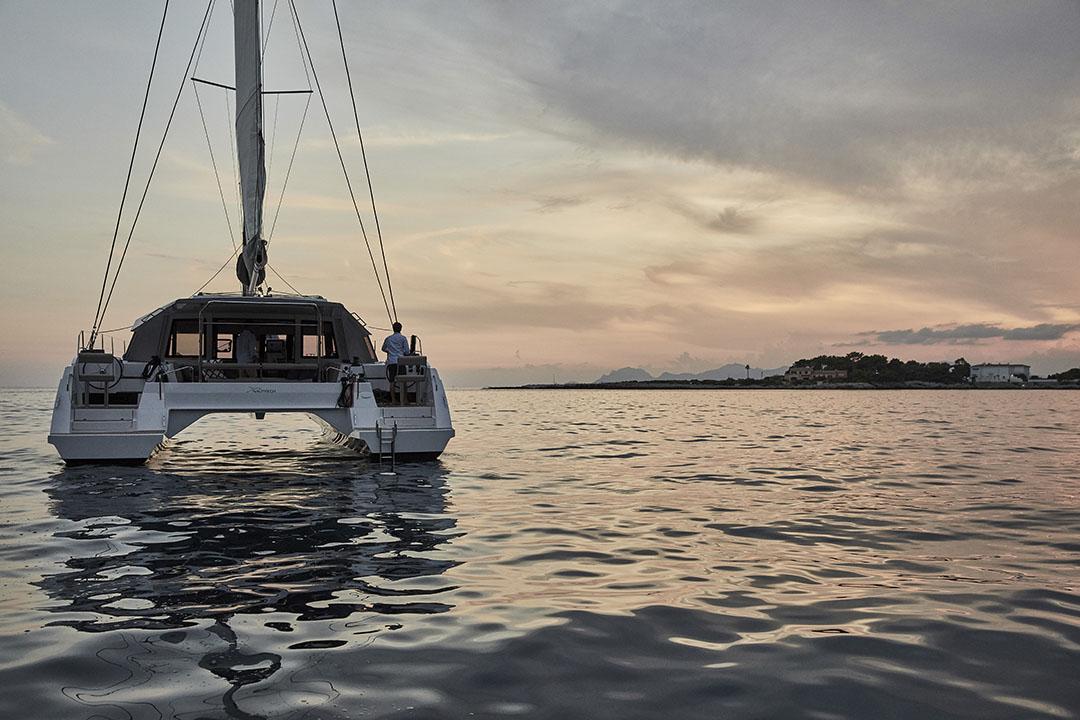 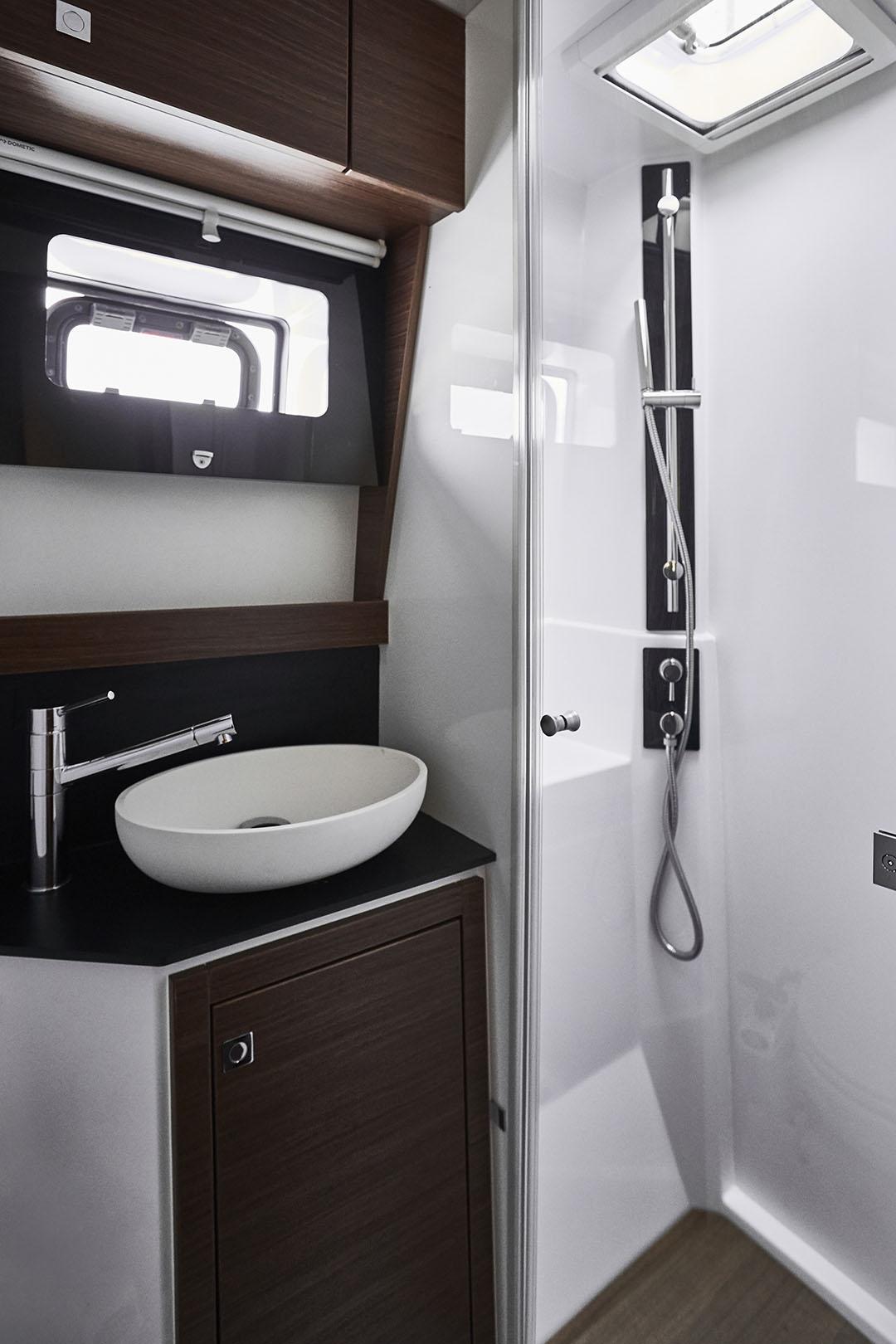 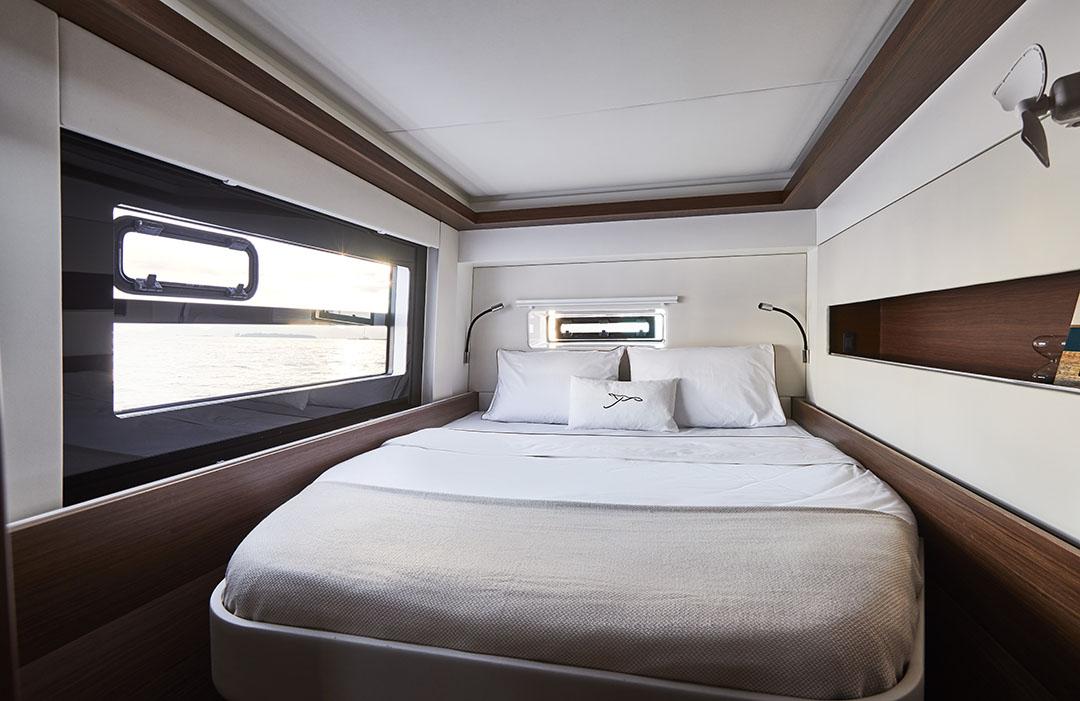 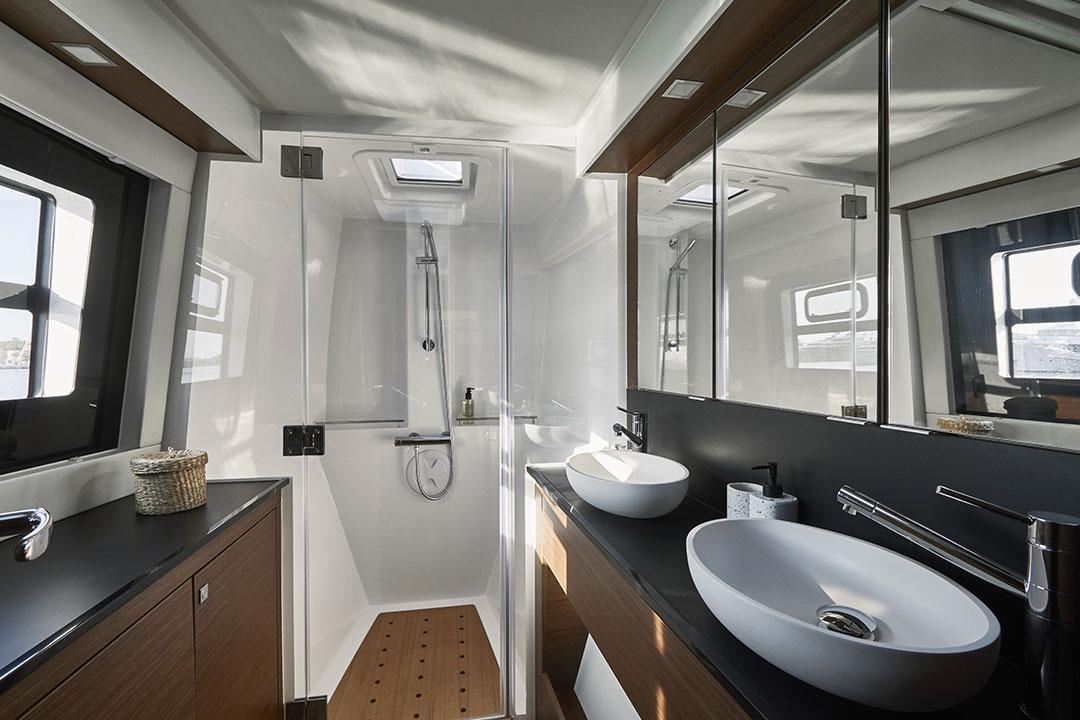 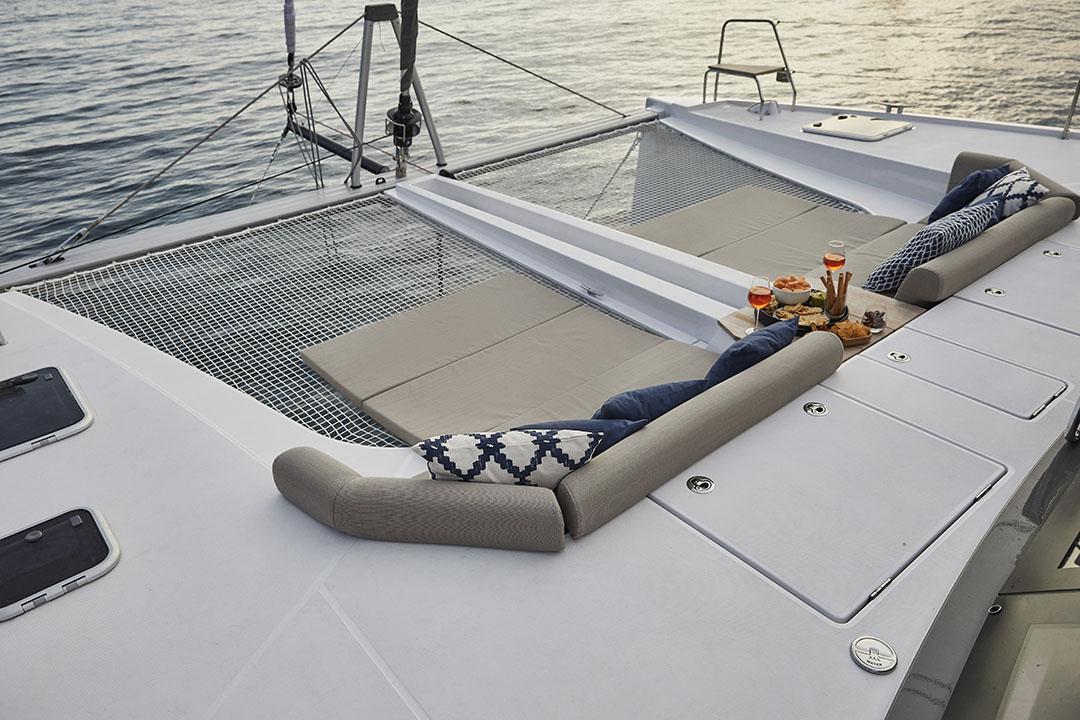 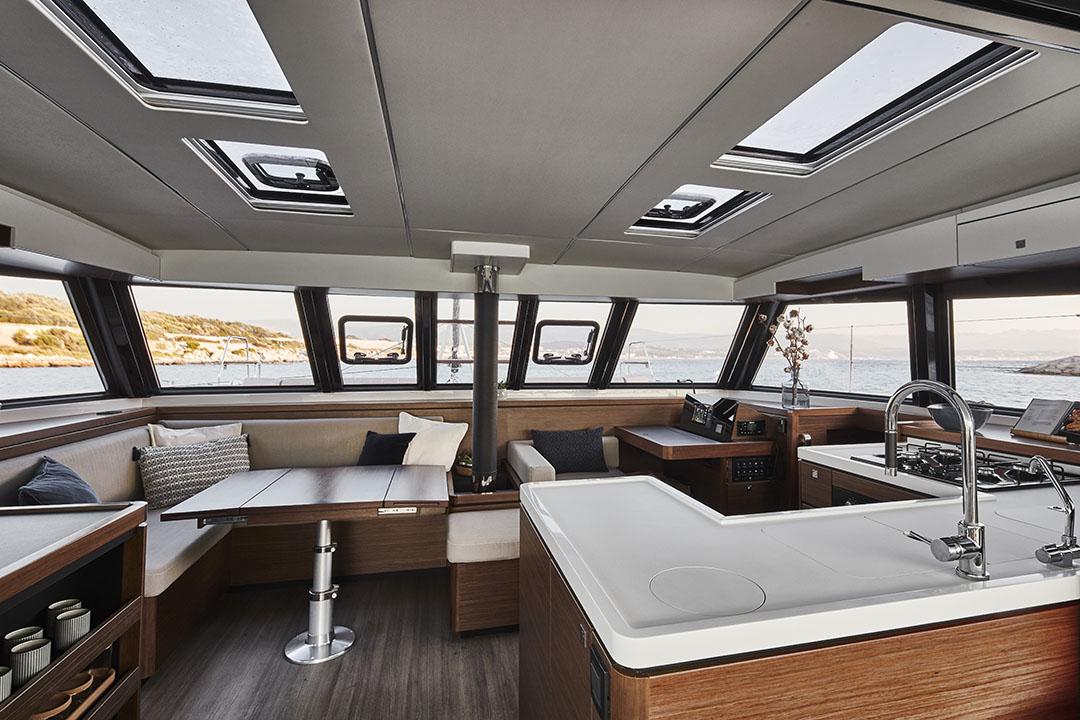 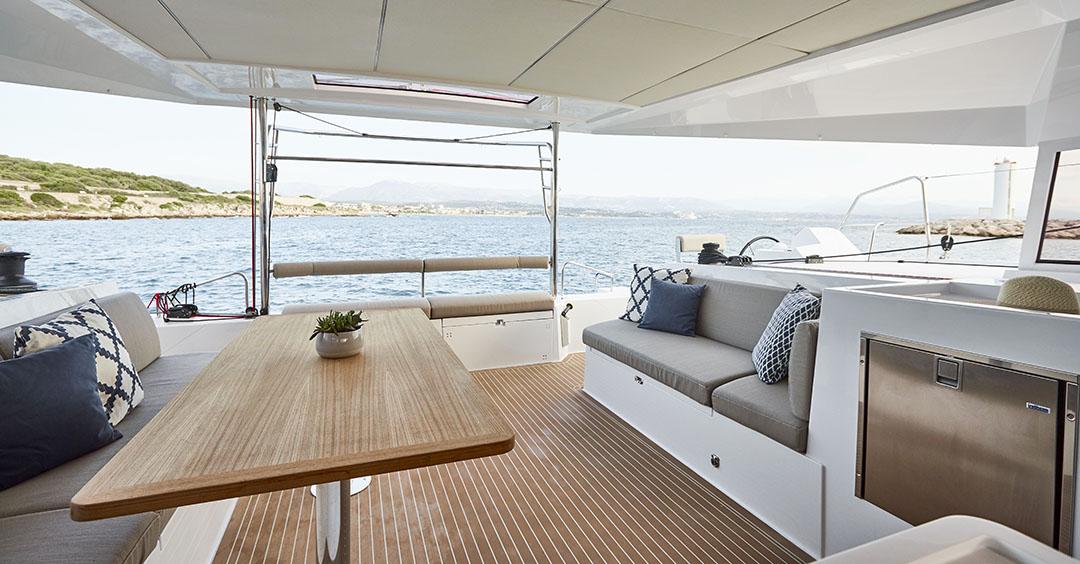 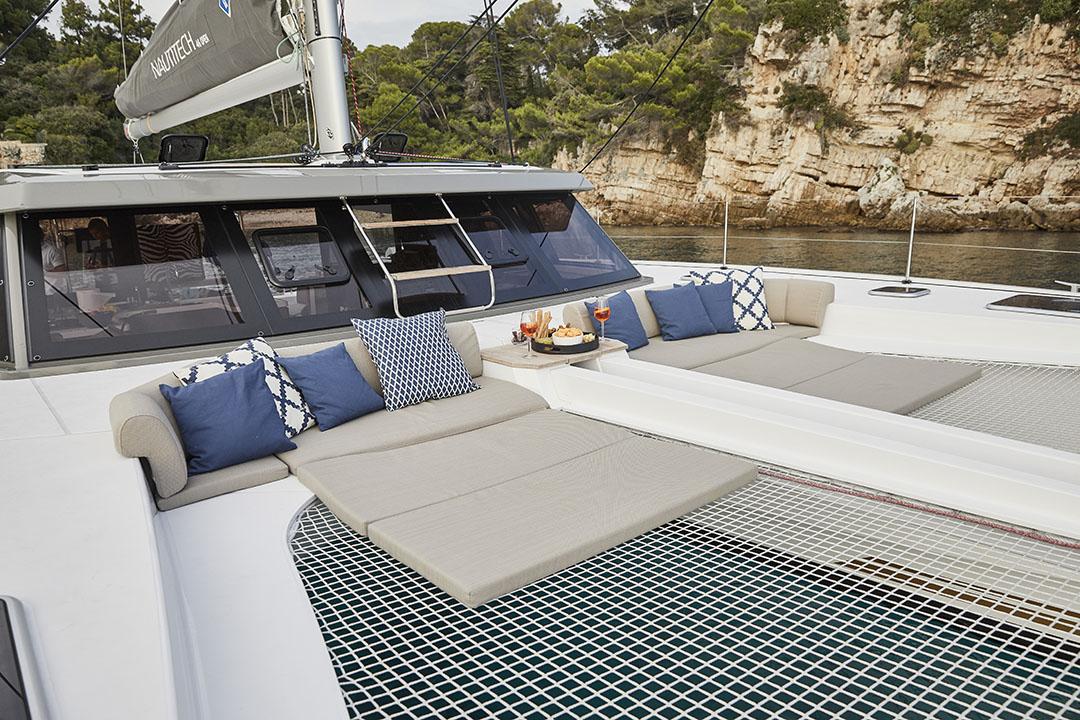 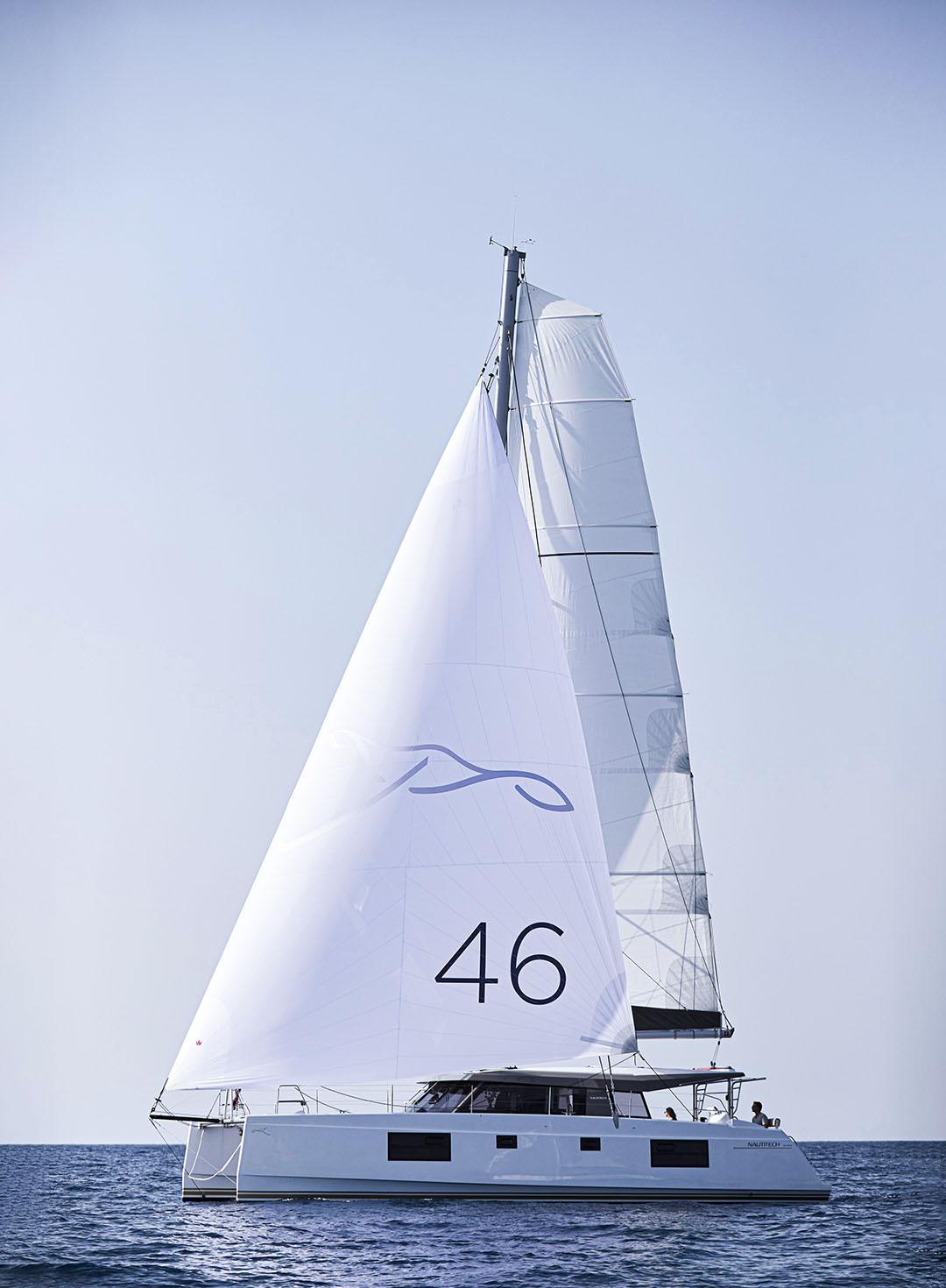