Ideal for both private use and charter

Born in Cape Town, the Leopard 46 PC immediately set course for Europe, and more specifically to the south of France, to demonstrate all the assets we discovered during a sea trial in Saint-Raphaël. Exhibited for the first time at the International Multihull Show of La Grande-Motte, she then gave herself over entirely to the yachting enthusiasts, including ourselves.

The yachting industry is relatively developed in South Africa, a country that boasts 26 shipyards, including 18 specialized in catamaran. If the percentage of sailing units remains higher, the power sector performs well, such as Roberston & Caine which produces the Leopard models of both kinds. The range includes three sailing catamaran (42, 45 & 50 foot) and three power ones (43, 46 & 53 foot). As navigation along the South African coastline is known to be risky, the shipyards export to countries with more hospitable coastlines. The Leopard family is represented here by an importer based in Saint-Raphaël. It is thanks to it that we had the opportunity to board this new 46 PC, a three-deck built in the Cape Town-based yard.

A rather original stern

Despite being perfectly aware of its very good length/width ratio of the multihulls, when facing a multihull – in this case a catamaran – it’s hard not to appreciate and praise it. On this 46 PC, the architect of Roberston & Caine design team conceived a stern with, between each platform extending the hulls, an additional hydraulic platform whose primary purpose is to accommodate the tender. It goes up and down, and even better, it can be moved backwards to facilitate the launch. And when it’s finally freed from the tender, it will come at the same level as the two hull platforms, thus creating an interesting beach club. Immediately above is the ever-popular cockpit, whose 17 m2 can accommodate a U-shaped settee with a table for six that can be converted into a solarium. It should be noted that the hydraulic platform also rises to the level of this deck, increasing the cockpit’s surface, enough to accommodate a deckchair or serve as a diving board. On board this 46 PC, this space will quickly seduce the most demanding. The starboard staircase leads to the 15 m2 sunlounge, partially protected by a hardtop. One immediately feels at ease there thanks to a three-person sunpad on the open aft terrace, a dinette for six to eight depending on the level of comfort required, a three-seater sofa on port side and a double-seat steering position forward. In other words, this upper deck is perfect for a sunny navigation and it can even get forward and side transparent plastic protections if the air ever gets cold. Before we get into the navigation part, let’s head towards what makes a catamaran so attractive, its forward cockpit! This 46 foot boasts a 18 m2 terrace dedicated to sunloungers with headrests, which conceal the crucial fender storage area.

And since the day of our sea trial was ideal, we decided to take the helm on the flybridge. The Leopard comes standard with twin 250 hp Yanmar diesels with traditional shaft drive transmissions. As an option, her engine holds (at the aft of each hull) can each accommodate a 320 hp engine of the same brand or, like on the model we tested, two 370 hp Yanmar. As the boat was moored alongside the quay, departing only required a short time and few manoeuvres: a slight intervention of the bow thruster and an equally minimal acceleration behind the two thrusters. If she does not claim to be a thunderbolt, during acceleration, the 46 PC did quite well as she only took 13 seconds to go from 0 to 20 knots. As the engine spooled up, we barely felt her lifting off, but her hulls did rise above the surface, and we easily managed to reach a maximum speed of 23.5 knots on a Mediterranean that was slightly choppy due to a light East wind. The 46 PC managed quite tight tacks and overall was both easy and pleasant to pilot, especially from the flybridge where there is an almost 360-degree view. For those who prefer the wheelhouse, please note the sitting position is much easier than the standing one.

One asset of a catamaran’s interior design is undoubtedly its main deck. On the 46 PC, the design team decided to fit the main galley at the entrance. The port side accommodates a refrigerator, a L-shaped work surface, a sink, an electric hob and an oven, while there is on starboard another work surface, storage space, a wine cellar and an ice maker. The central alleyway is naturally fitted out with a lounge on port side, which also serves as a dining area for six. Opposite is a small two-seater sofa, behind the wheelhouse. On each side, a staircase leads, as you might suspect, to the cabins in the hull. Let’s start with the three-cabin layout, which offers a real master of 13 m2 (starboard hull) with, aft, a double bed facing the direction of travel, as well as a hairdressing/make-up area, a sofa and finally the bathroom with two washbasins and a separate shower. The four-cabin configuration accommodates two cabins on each hull: one at the stern with the bed facing forward and one at the bow with a perpendicular bed. All four are en suite, an advantage should the owner wish to charter this unit. In the world of multihulls, the 46 PC will soon make a name for herself considering her attractions, including habitability and comfort, which are, of course, the main assets of this type of boat. 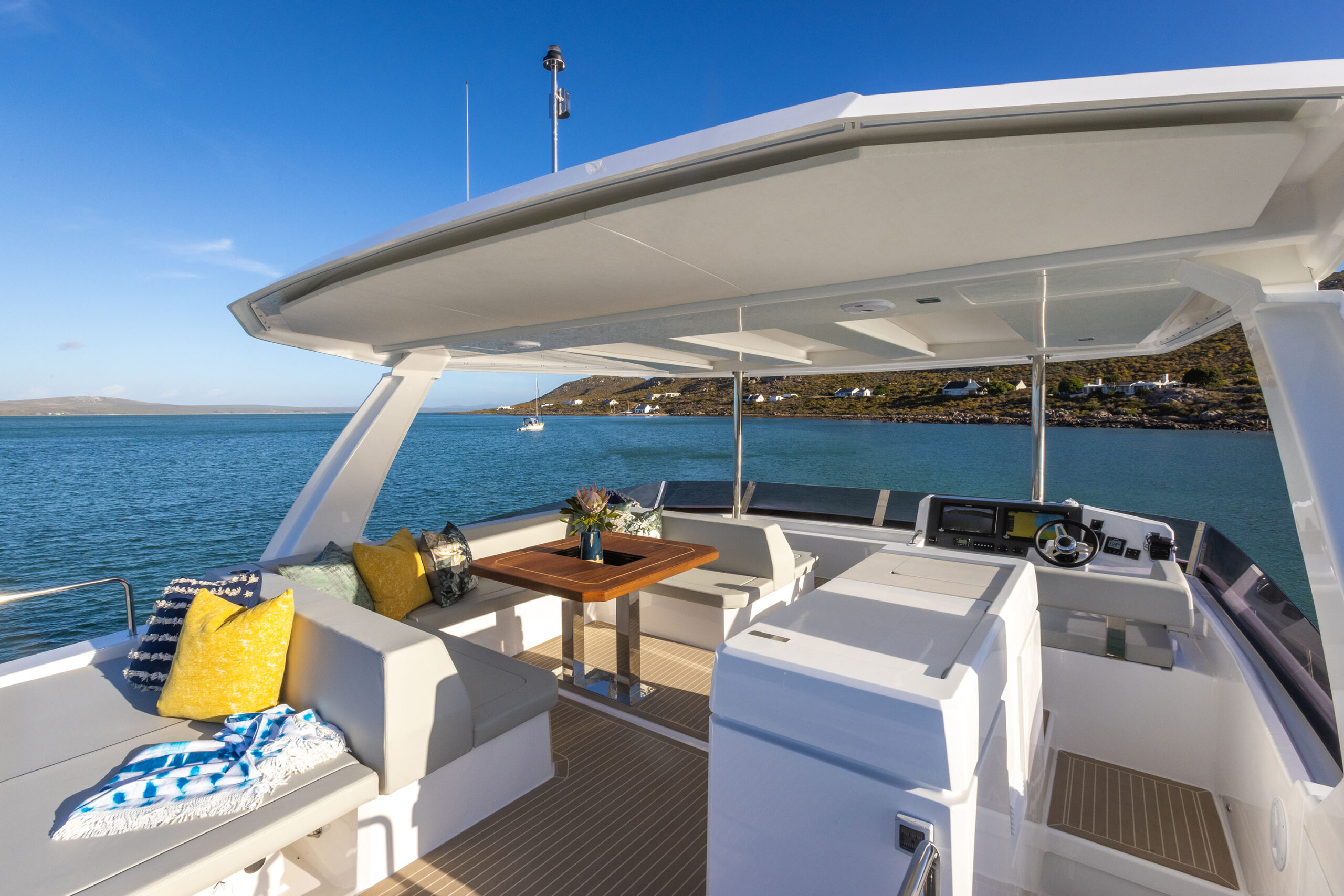 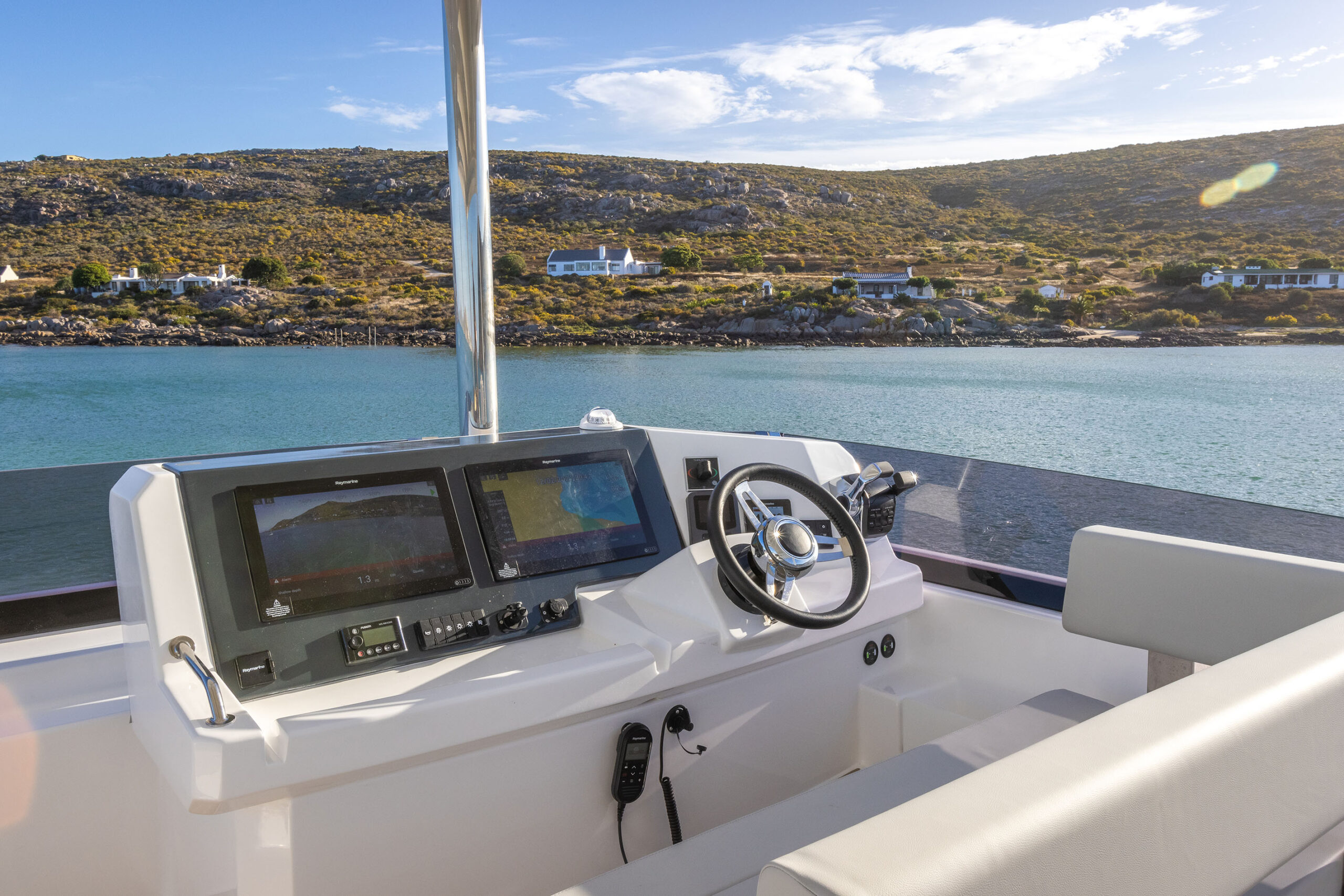 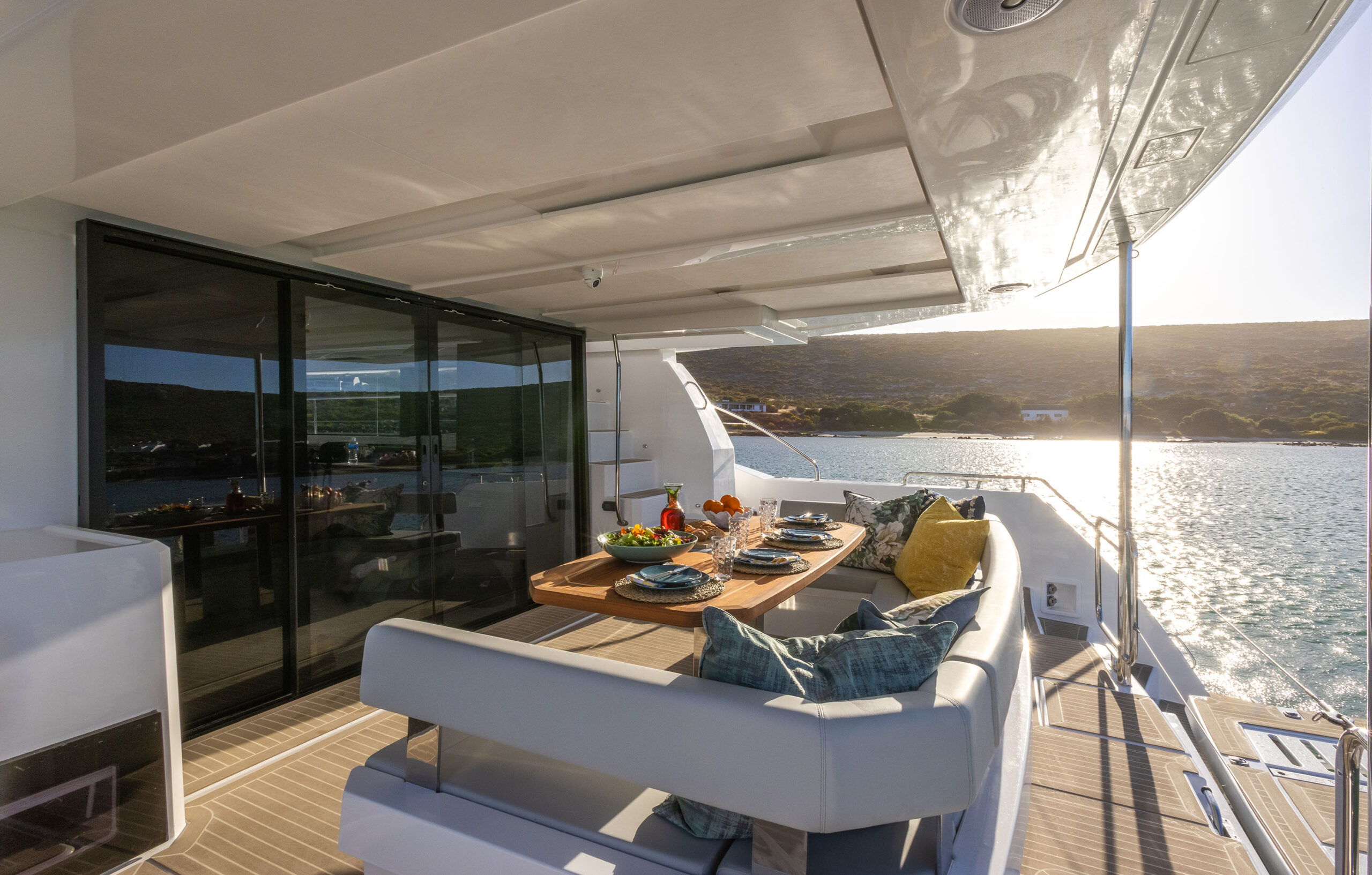 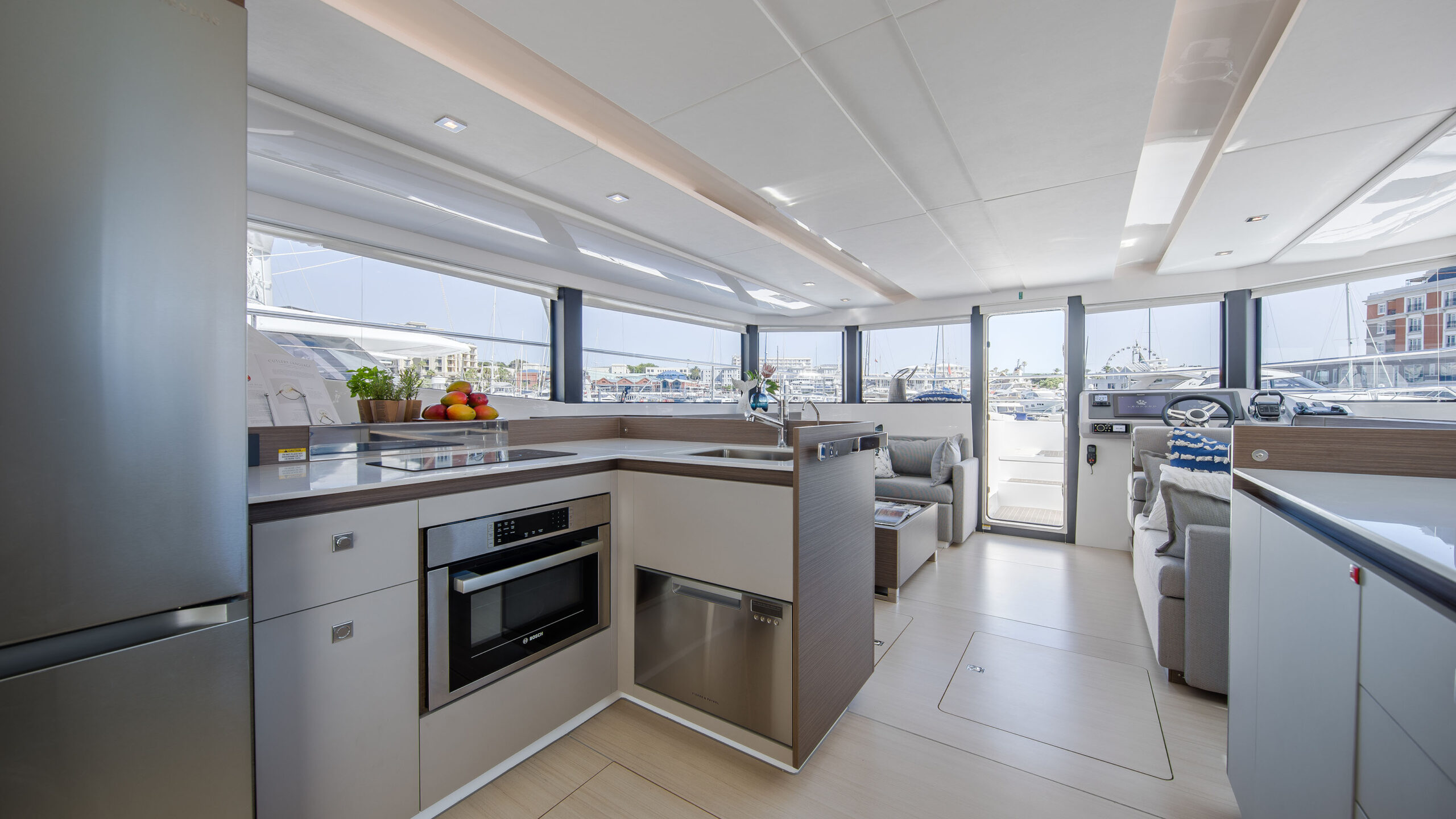 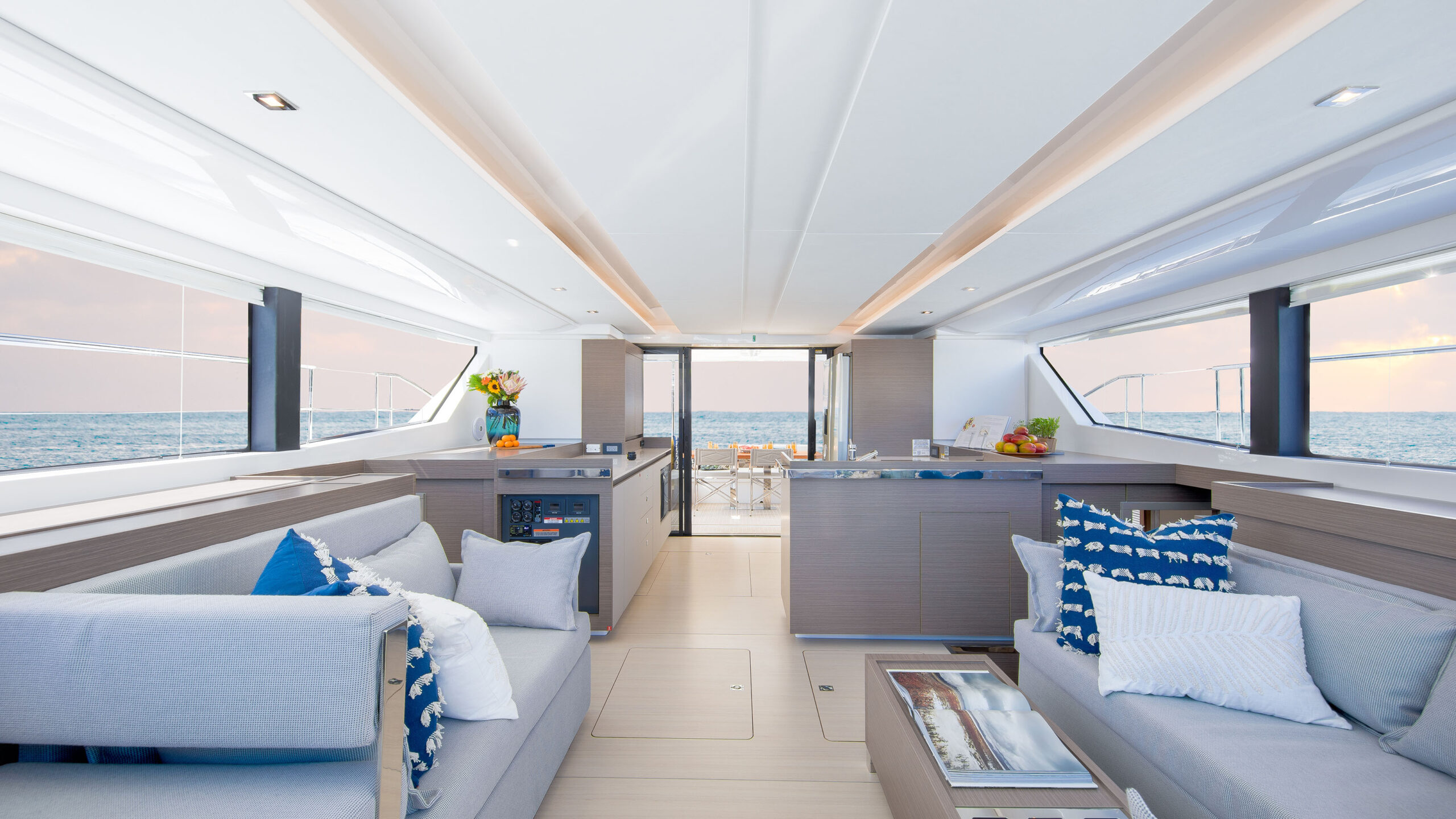 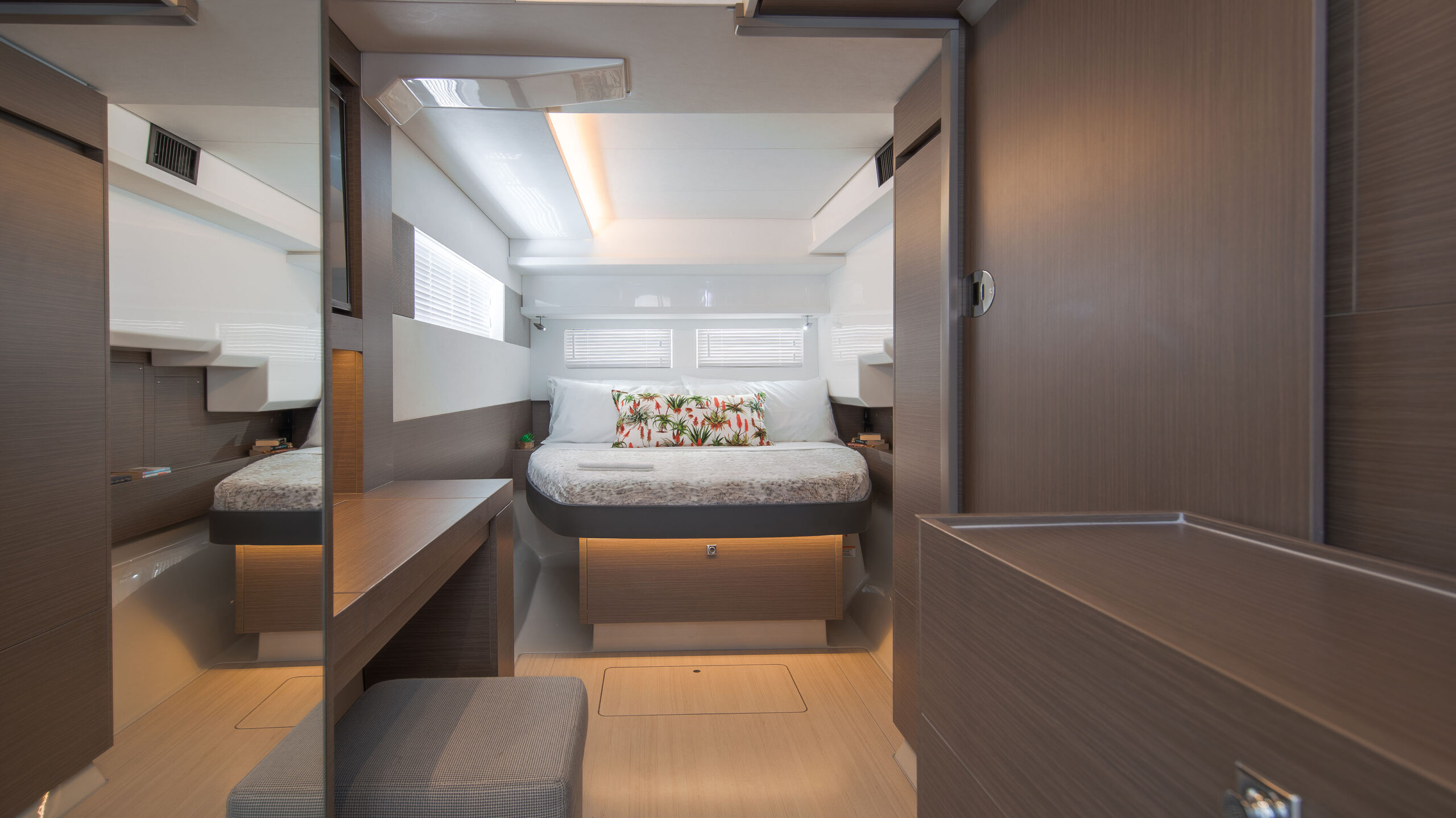 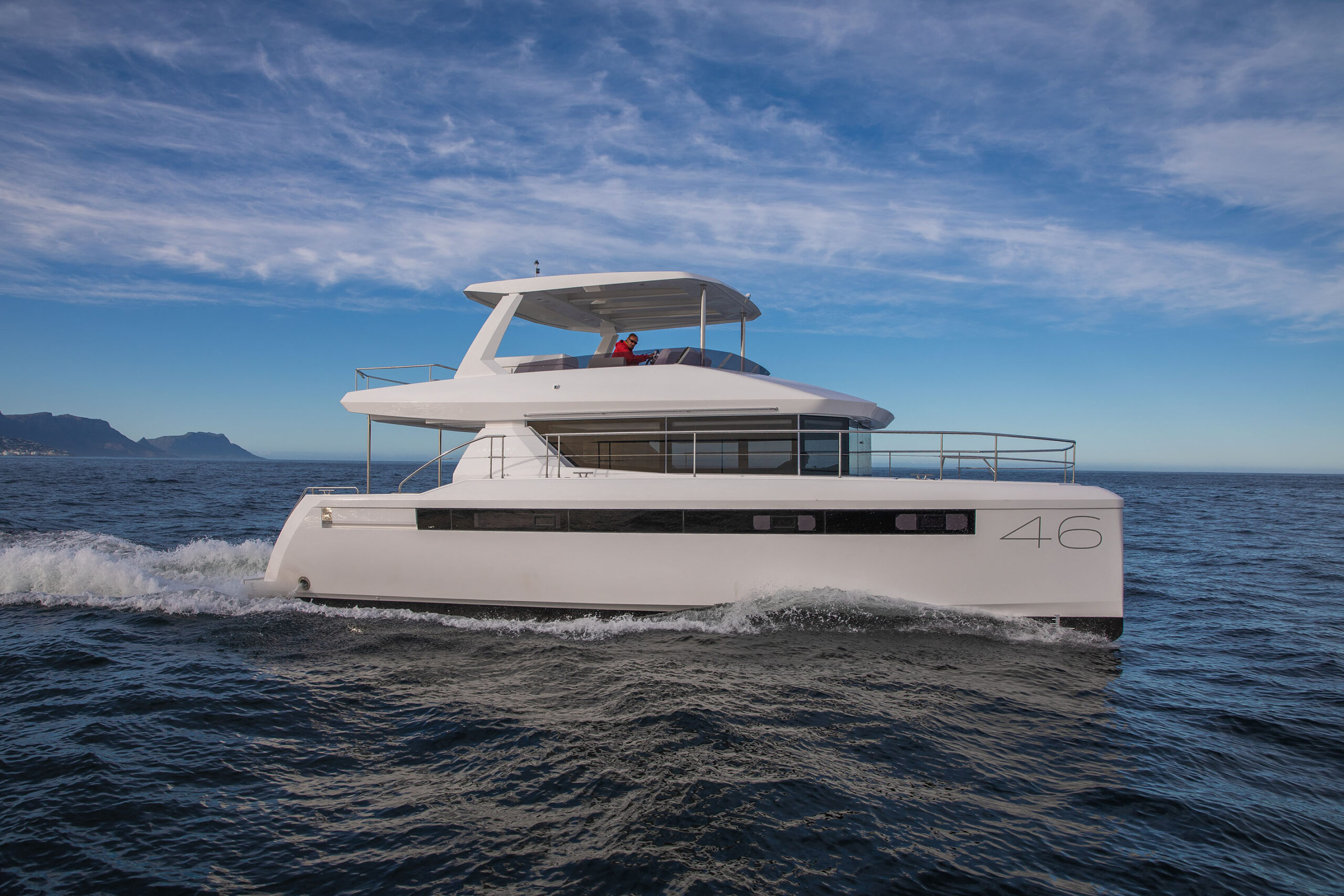 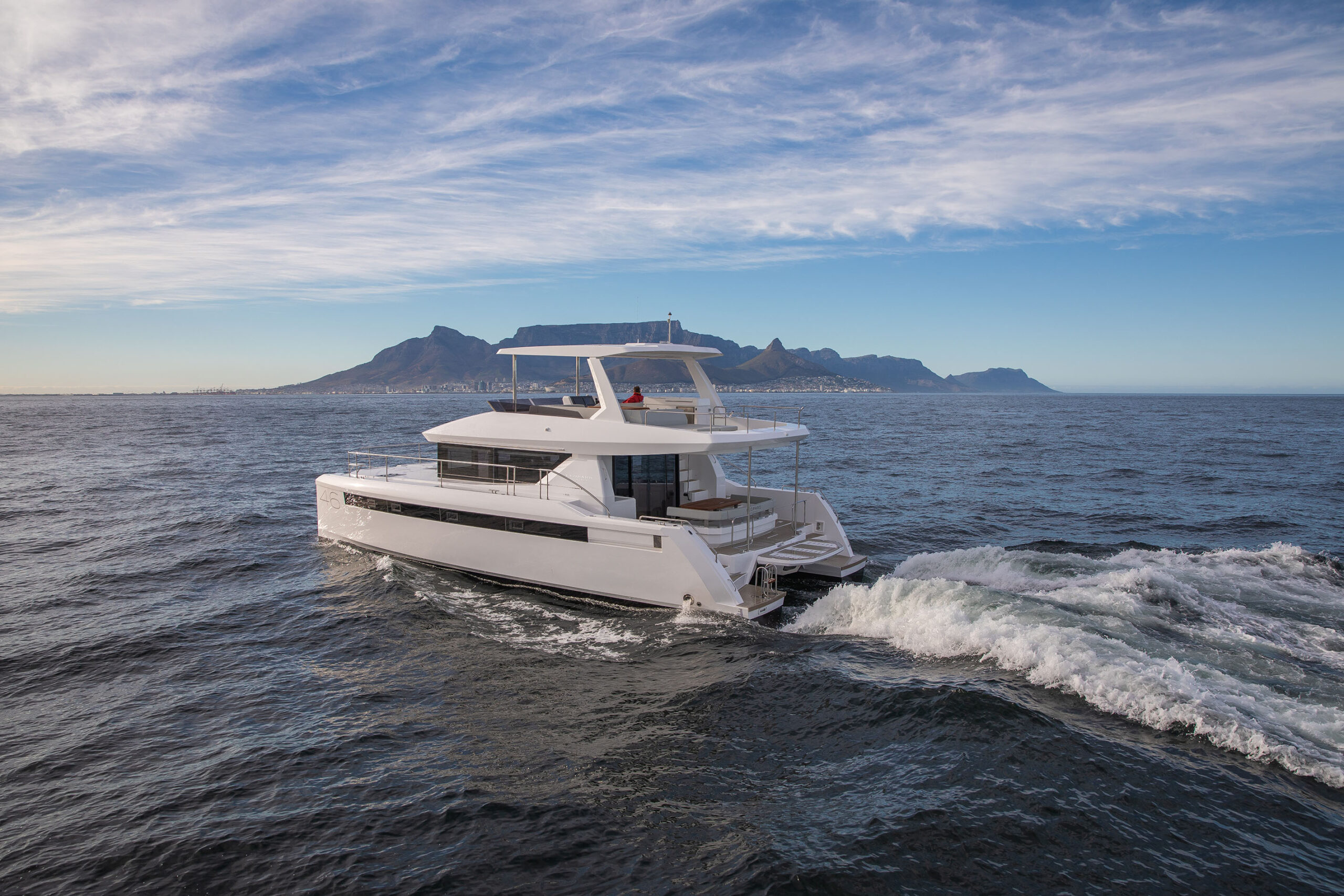 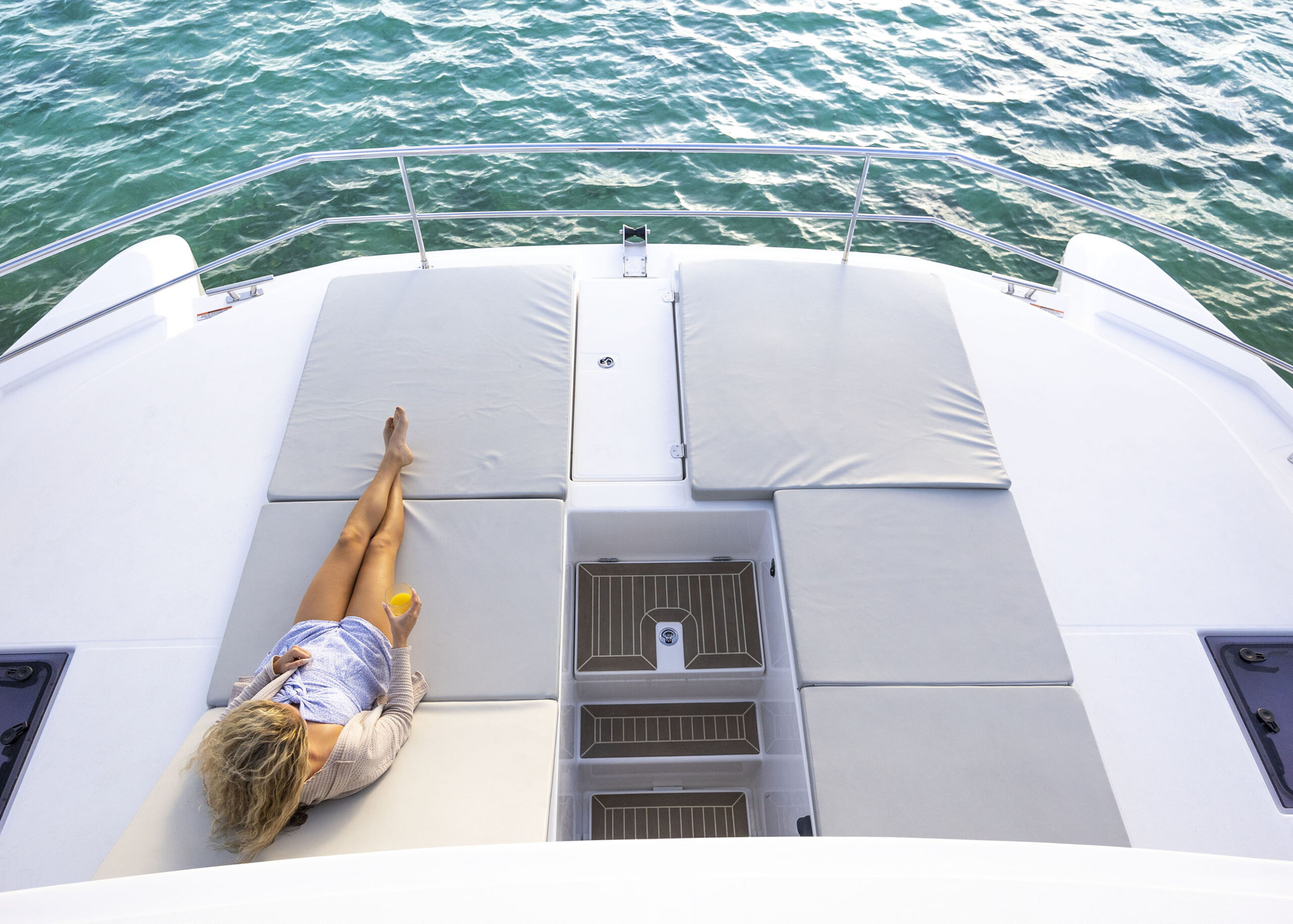