The archetype of family cruisers

After placing emphasis on open hard-top models, the British yard is developing its flybridge range, named Squadron, with a 68 foot unveiled during the last Cannes Yachting Festival. Intended for family cruising, she can accommodate up to four cabins. And her performance makes her even more attractive.

Fairline has undeniably earned a well-justified reputation in the open hardtop category, with its range of five models (45, 48, 50, 53 and 65 foot), all available in Open (or GT) or GTO versions. David Tydeman, the executive chairman appointed in 2018, focused on two priority objectives: to recast his team and develop ranges, in particular the flybridge one. During the Cannes Yachting Festival, the latter has actually lifted the veil on Fairline’s new flagship: the Squadron 68. And for us, this buzzing world premiere started with a visit and ended with a sea trial… what more could we ask for?

Before setting sail to the Mediterranean, a word about the silhouette of the Squadron 68. If the shapes remain harmonious from the waterline to the hardtop, the same cannot be said of the flybridge. In addition to being slightly too high, it did not get an elaborate design. Otherwise, the dynamic profile of the superstructure suggests that this unit should be capable of performance. All the more so as the hull was designed by the Dutch studio Vripack, a recognized talent. The 68’s engine room houses in standard twin 1 150 hp CAT diesel engines with shaft drive. Port manoeuvres were easy. As for us, we headed to the flybridge helm, located on starboard and quite comfortable with its two ergonomic seats with a flip-up bottom. Quite handy, especially when leaving the marina. Then the two Caterpillar showed a fairly consistent torque: 11 seconds to go from 0 to 20 knots and another 21 seconds to reach 29 knots – the top speed -, which is quite honourable considering the average laden weight around 46 tons. Note however that the shipyard anticipated her to exceed 30 knots. Possibly the hull was already “squatted” by algae and micro-shells? One thing is certain: she is pleasant to steer and manoeuvre. In case of bad weather, the skipper can opt for the main deck wheelhouse, also located on starboard, and equipped with two ergonomics but massive leather armchairs. For reasons of space, those could not be partially concealed behind a piece of furniture, but there is nothing shocking about it… As for the technical and design dashboard, the pilot will easily get accustomed to it, while enjoying a very good visibility on at least 180 degrees.

The interior designer Alberto Mancini has managed to create a pleasant gathering space, where light colours predominate (ceiling and upholstery) whilst allowing an interesting contrast. Thus, the floor is in oak and the galley in varnished mahogany. The latter features all the required equipment and is strategically positioned at the entrance of the reception area, close to both the cockpit and the salon, which can become a dining area. It should be noted that a larger table than the one of our unit will be necessary to accommodate six guests. Which is perfectly acceptable for the yard. The staircase to the left of the wheelhouse leads belowdecks where are gathered all the cabins. The commissioner opting for the four-cabin layout will naturally enjoy a full-beam master amidships. On portside, it features a series of convenient storage while the starboard side can get either more storage spaces, drawers or a meridian. The bathroom (separate shower stall and WC) and dressing room are located behind the headboard partition. Note that the master is meticulously decorated, as obviously desired by the commissioner. The “VIP” guests will enjoy the forward cabin, located in the bow, and fitted with a double bed and two wardrobes. It also has its own bathroom while the two other guest cabins share one. In the three-cabin version, each one is en suite and an extension of the VIP allows the installation of a settee.

From the foredeck to the flybridge, a watchword: farniente !

This Squadron being a flybridge, the upper deck is naturally put forward. Almost entirely topped by a hardtop and its rotating slats, it offers nearly 30 m2 to those who enjoy admiring a 360-degree landscape from a dominant point. The aft section of the flybridge will be the perfect spot to accommodate the sun loungers or two settees and a coffee table. In the centre, there is a comfortable dining, located opposite to a kitchenette (grill, fridge, sink and cupboards). As for the forward section, it accommodates the starboard steering position, a double settee plus a solarium on portside. However, the flybridge staircase lacks a handrail (Fairline has promised to rectify this). We only have one wish : a bigger cockpit table. There, the yard actually plans for its future models a more ergonomic bay windows opening on the interior volume. As for the quite large foredeck, with its saloon (settee and table) and solarium, it is ideal. Note that a canvas can be stretched between four stakes to protect it from the midday sun.
After her premiere in Cannes, the Squadron 68 was exposed in Düsseldorf, and then in Miami. As a flagship, she must attend international nautical events. Especially since she has many assets to put forward. 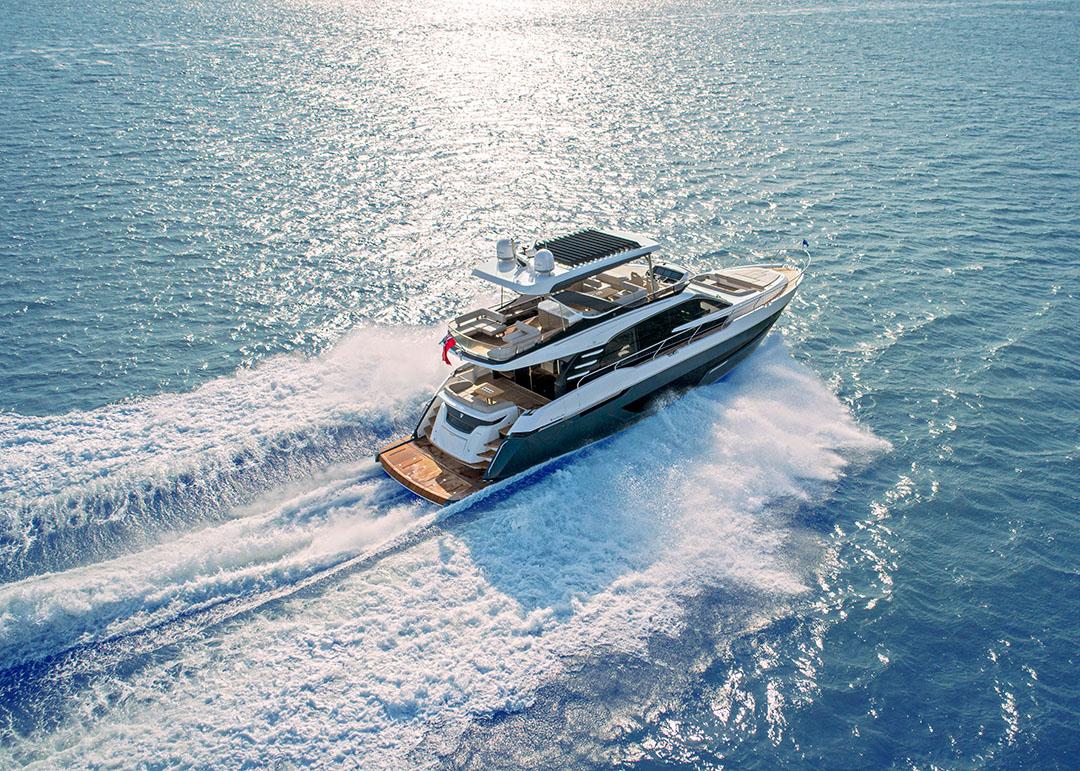 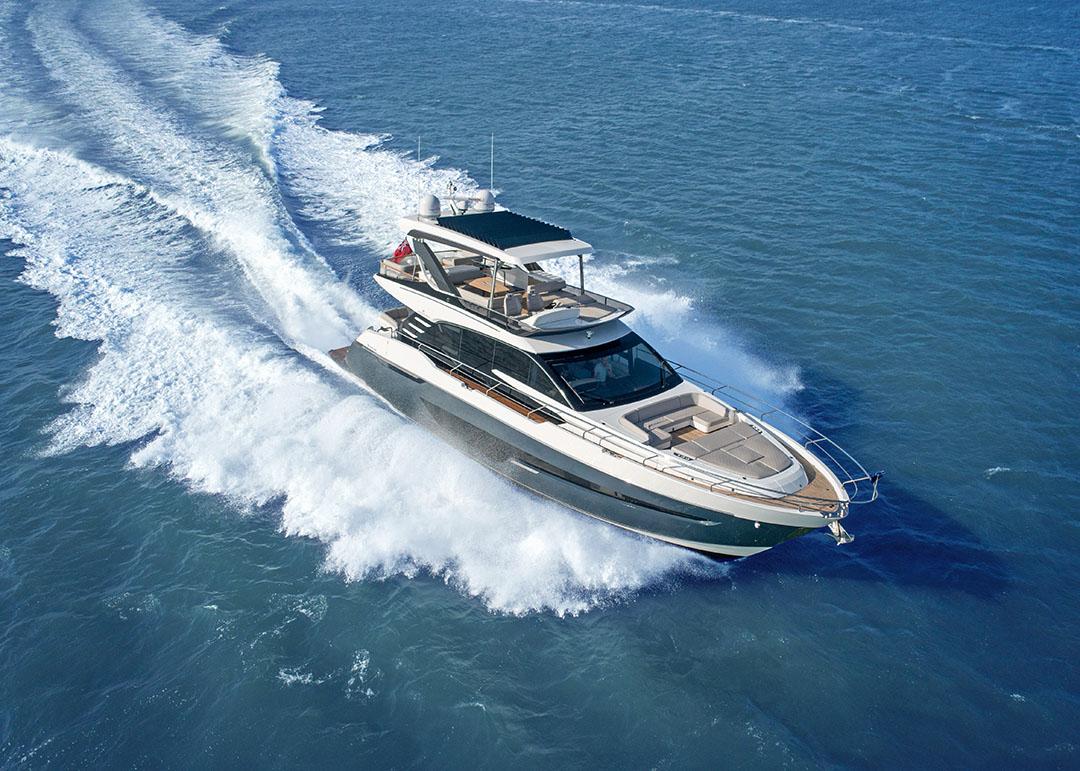 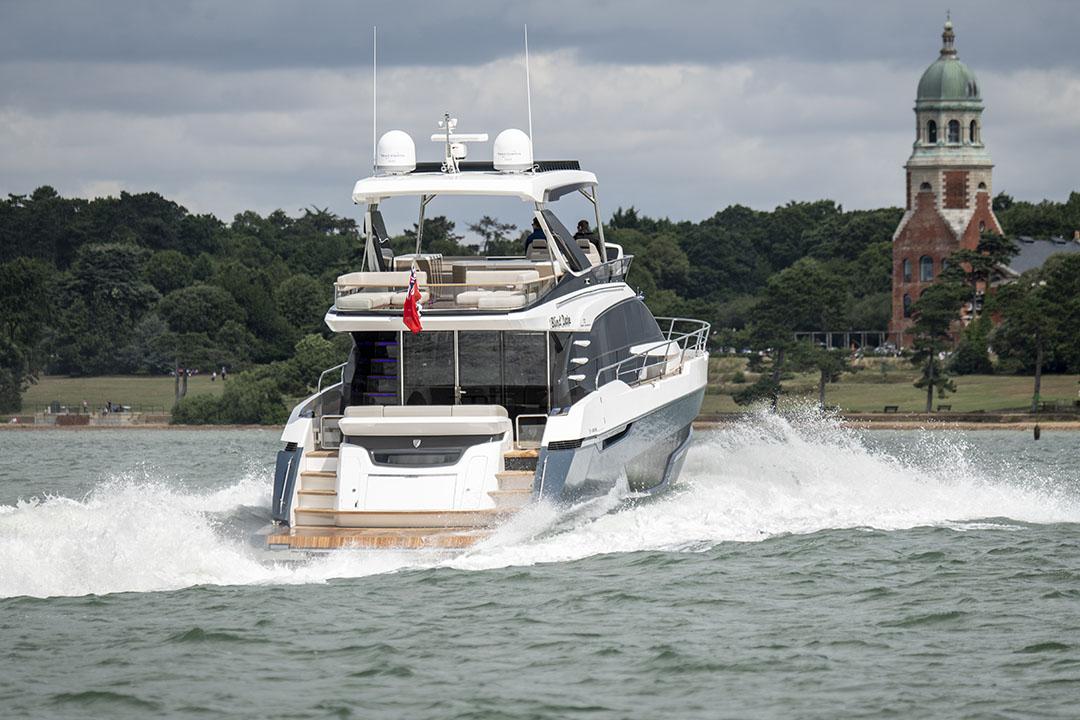 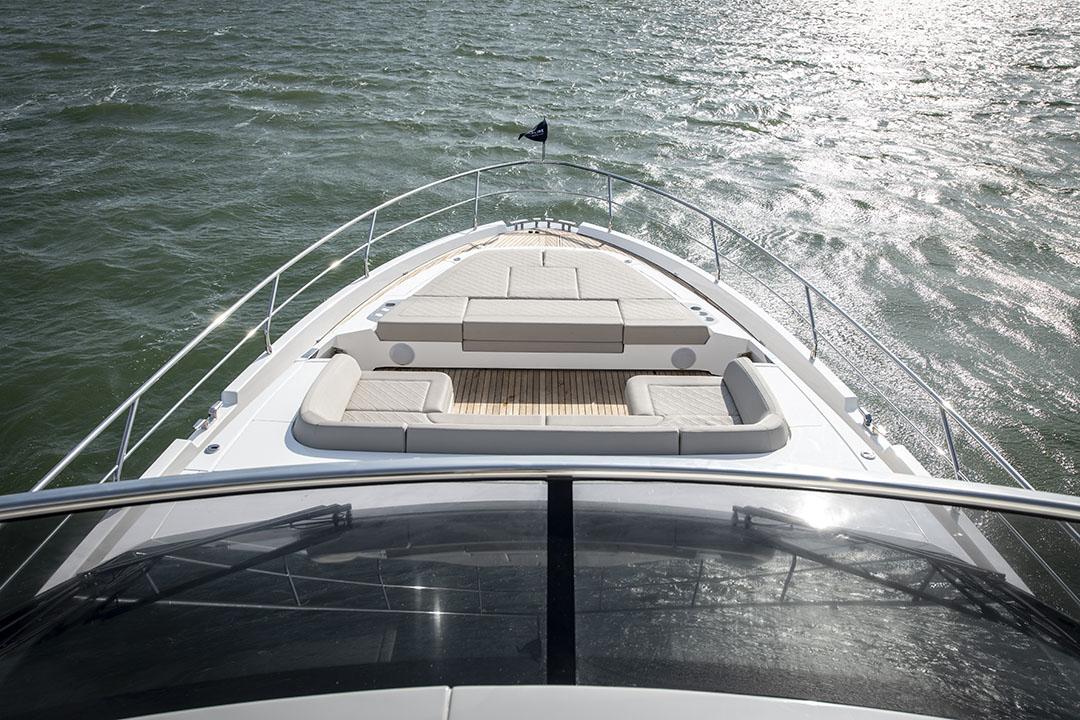 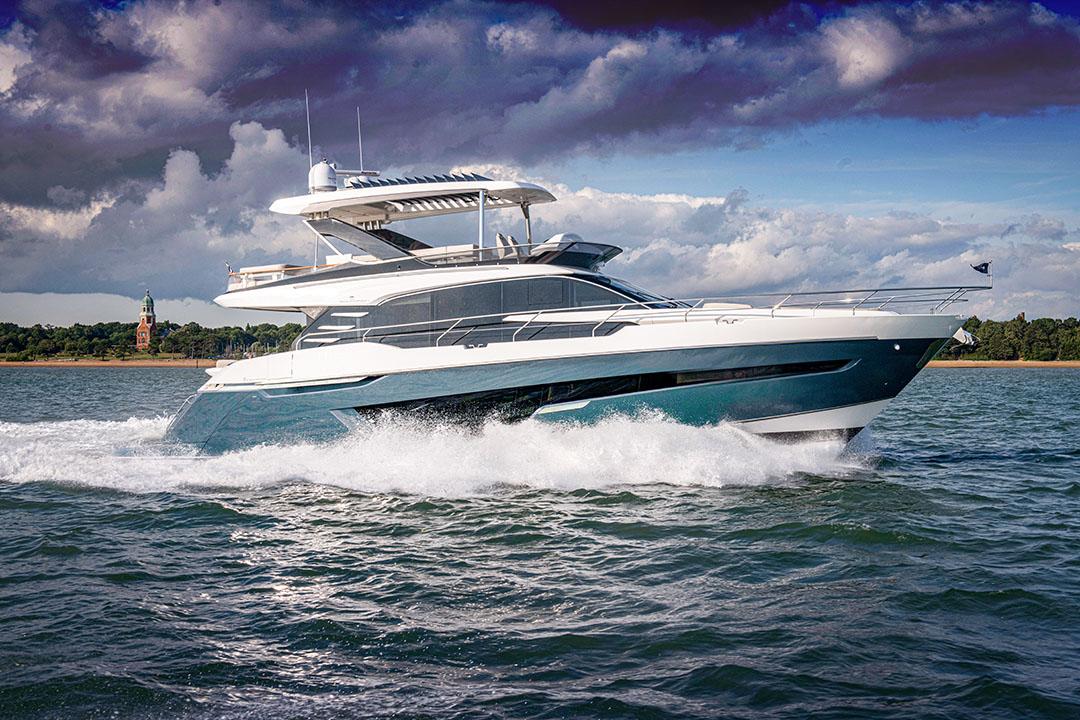 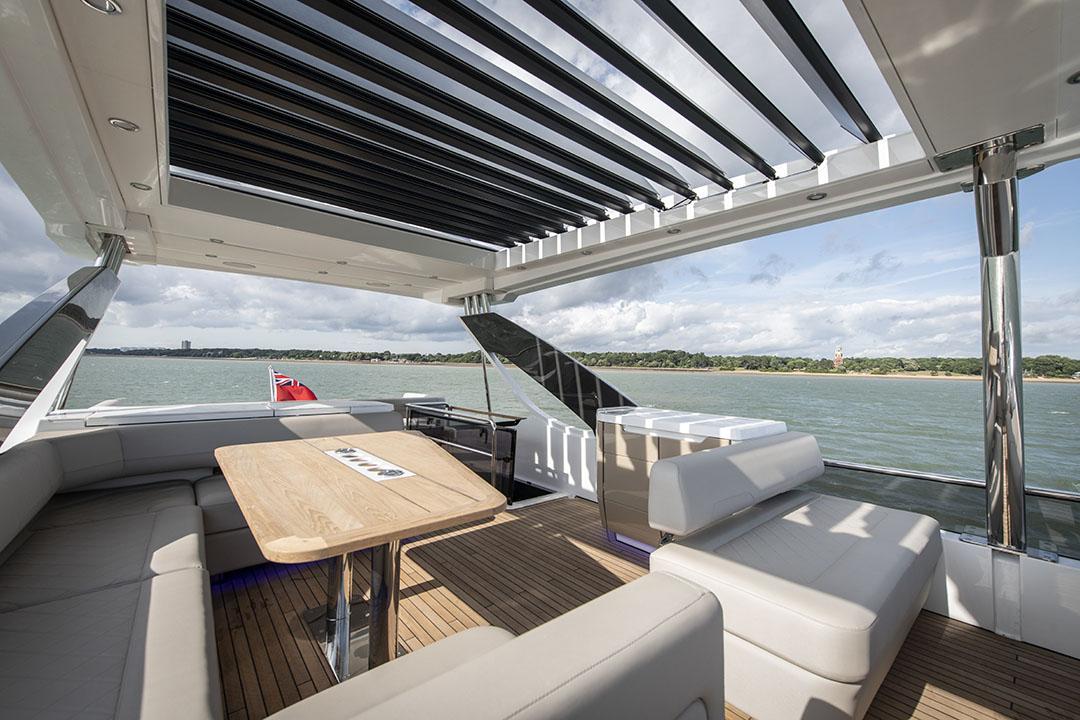 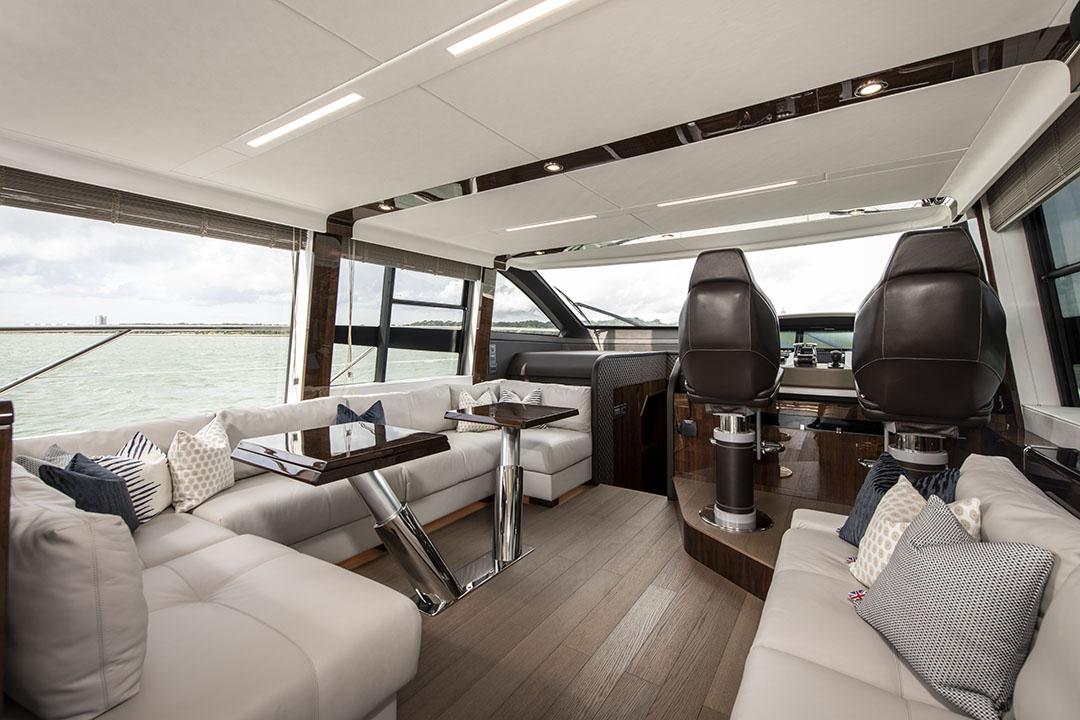 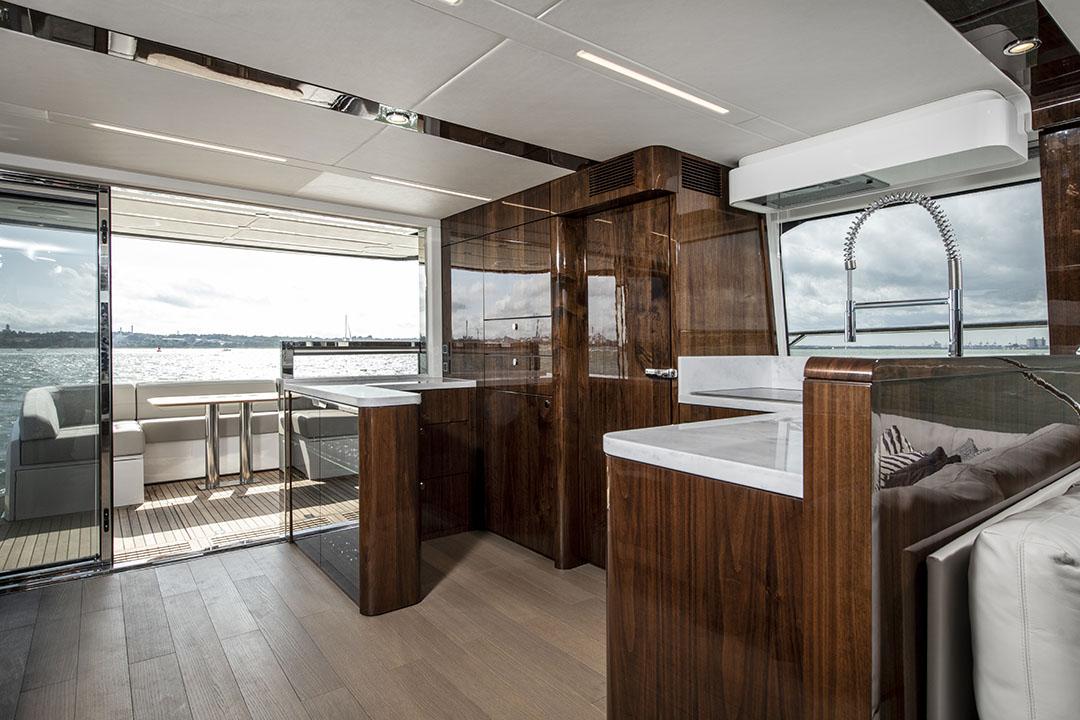 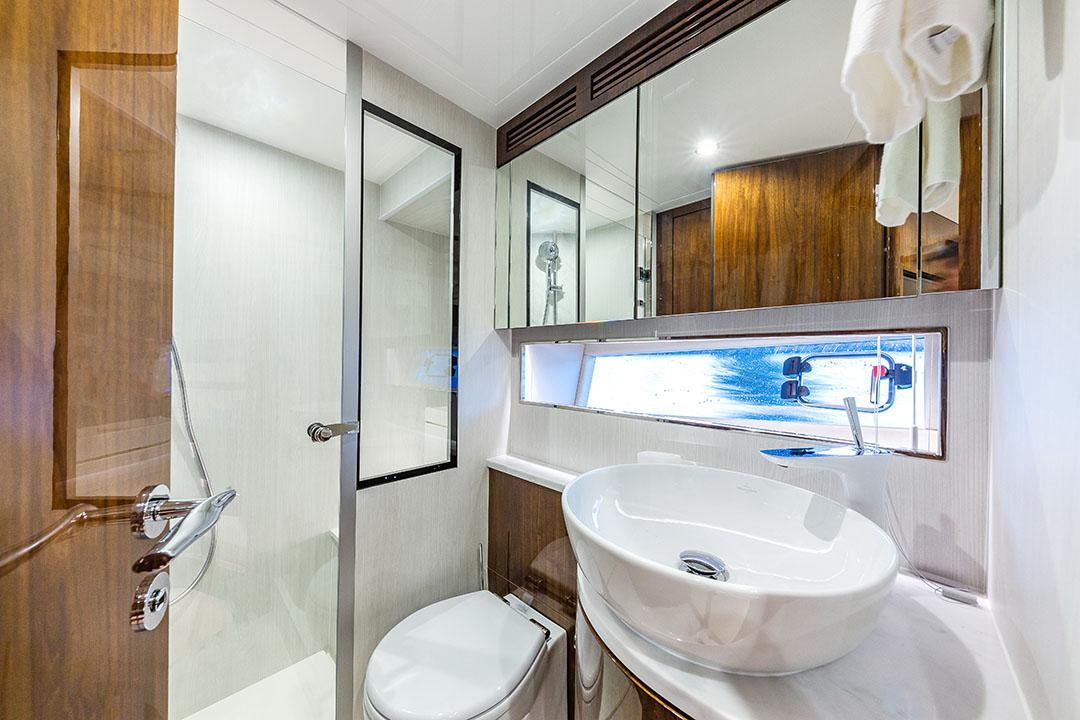 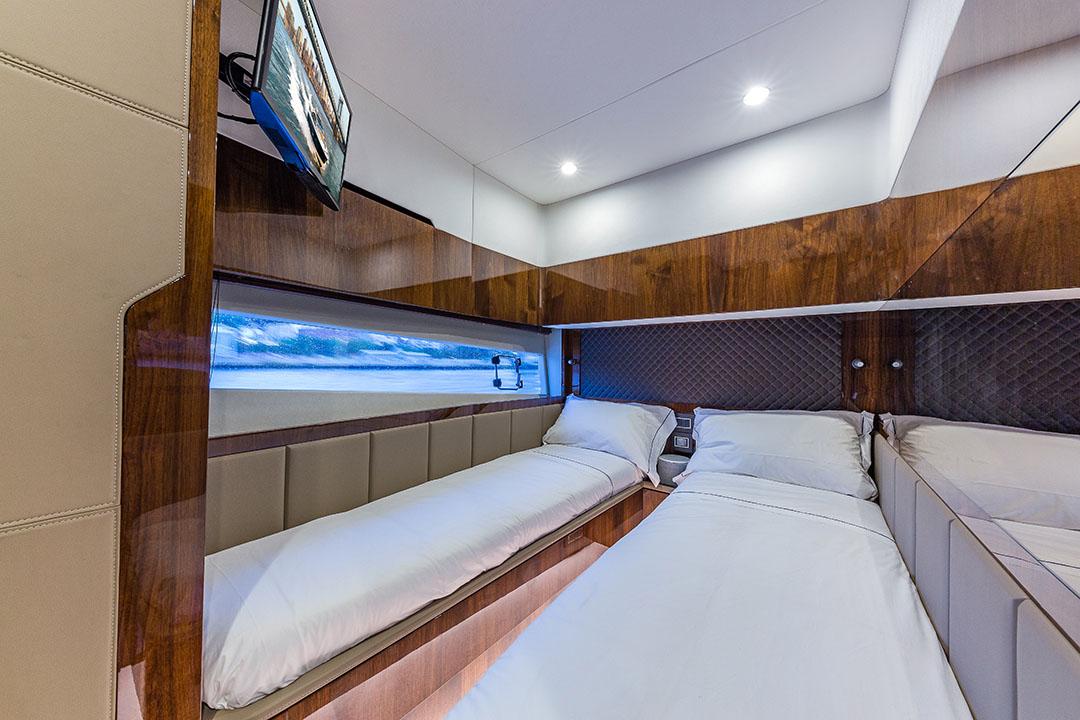 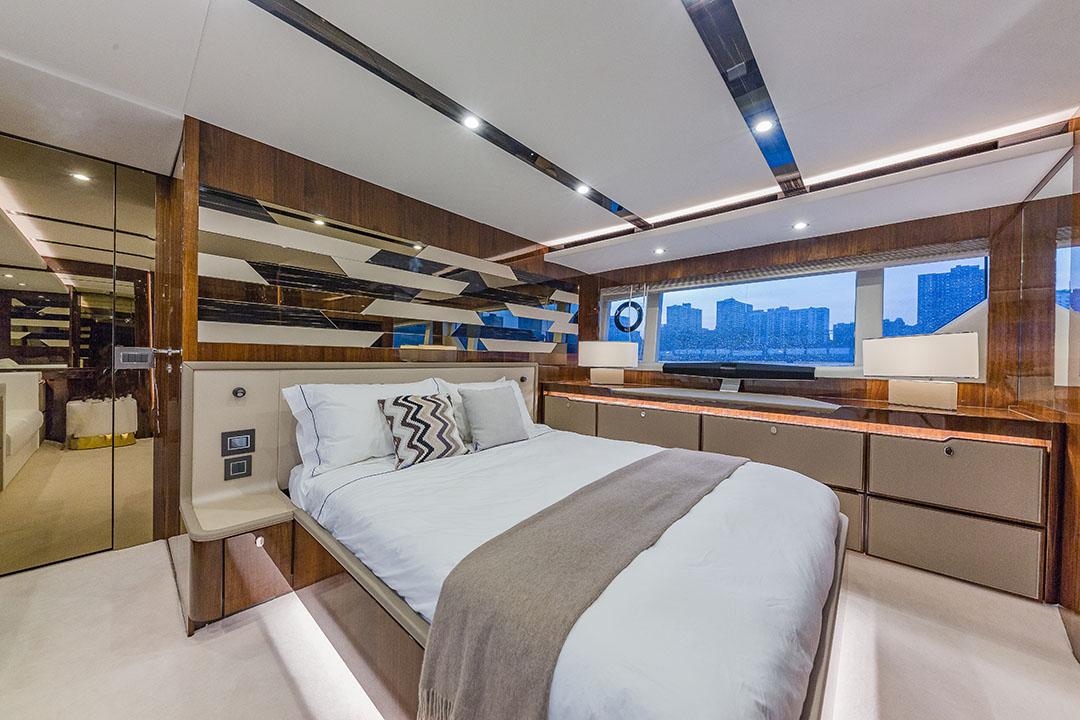 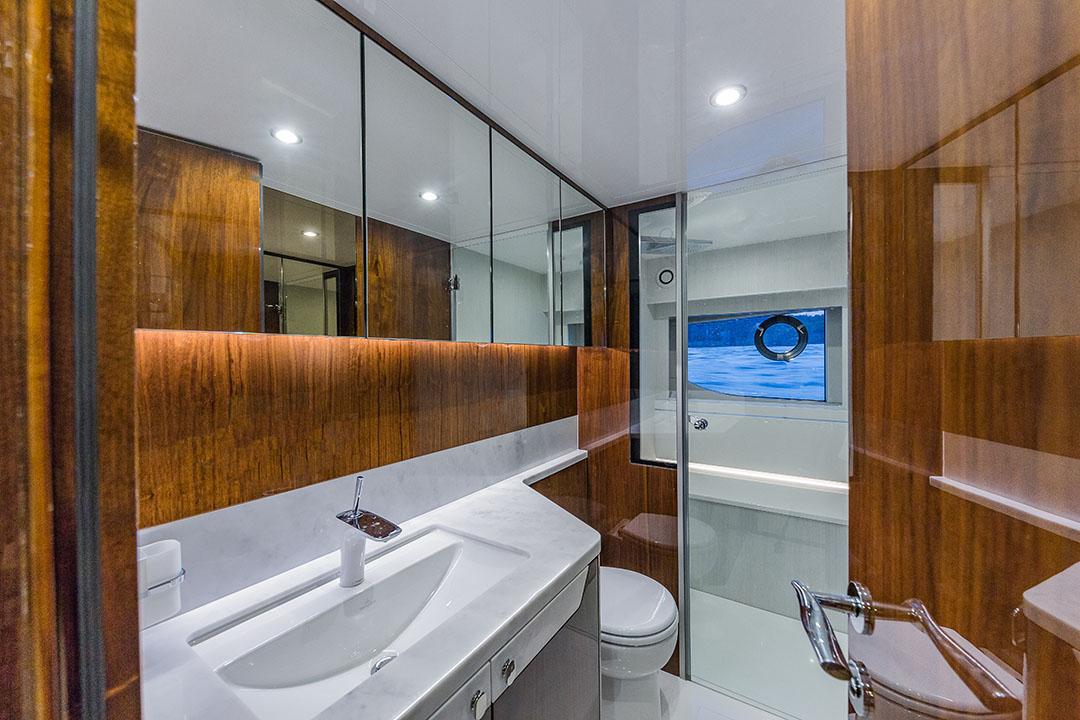 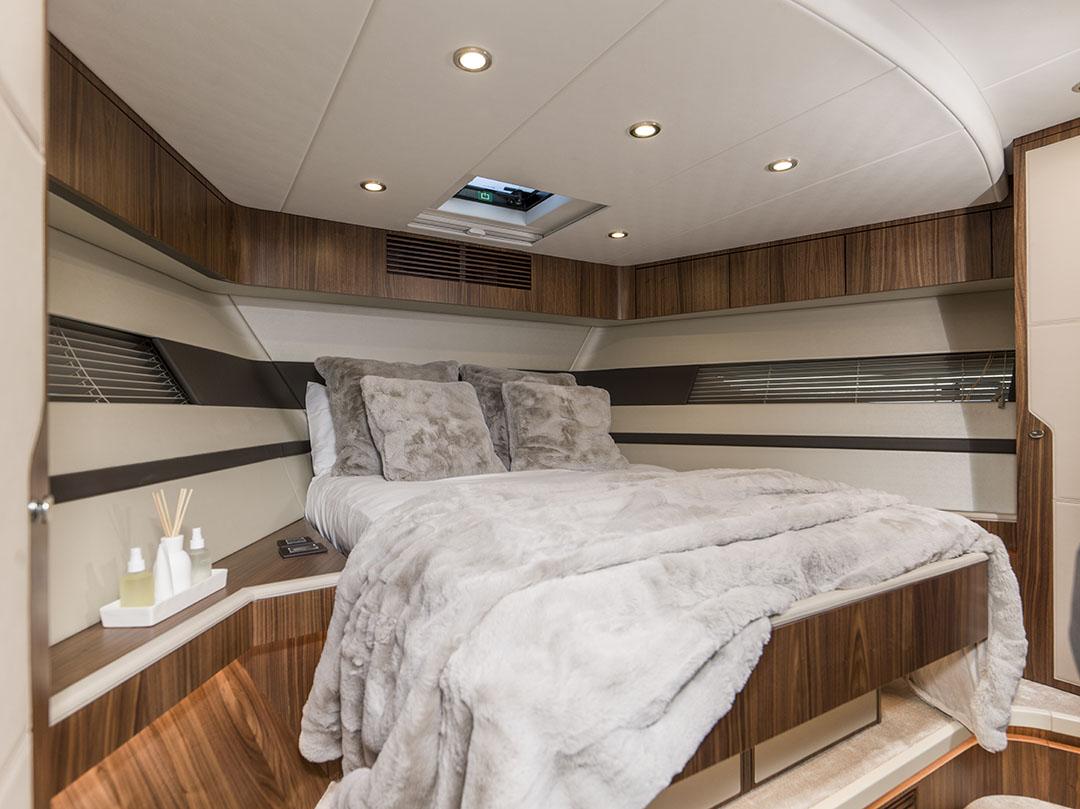