This is how the Neapolitan shipyard describes its latest creation … And, to say the least, it is true. As much for the space offered by the various decks, and more particularly for the oversized cockpit, as for the installations, which compete in luxury and functionality. And with the added bonus: originality!

Three years after the Sherpa (60 feet), here is her big sister the Sherpa XL (78 feet). Built on a semi-displacement hull, this two-deck yacht (with sunlounge) teases the fateful limit of 24 meters, which marks the entry into the big boating and the regulation that goes with it. Before embarking on the visit, a word about the Arcadia style, a brand for which we can legitimately speak of style, whether in terms of the concept, the silhouette or the interior decoration. Everyone will admit that a strong personality emanates from the yachts of the Neapolitan shipyard. To start with, this very rounded bow at the level of the bridge line, guaranteeing a large habitable volume, and the superstructures, very precisely structured, with their prism shape and the grey “Arcadia”, which visually lightens the tops by contrast with the white hull. And, above all, the large deckhouses made up of solar panels. Within the Arcadia fleet, the Sherpa XL stands out even more, taking on the architecture of her little sister, a nod to the “explorer” style, with a huge aft cockpit lowering towards the swim platform. Once again, her design was entrusted to the Milanese Hot Lab, which officiates for major brands (Mondomarine, Baglietto, Oceanco, Heesen…).

Marking the 10 years of existence of the shipyard founded by Ugo Pellegrino, the launch of the Sherpa XL at the last Cannes Yachting Festival gave rise to a press conference during which the formula “slow yachting concept” reflected well the philosophy of Arcadia, which intends to give the owners of its yachts the time to experience the sea, while attaching some importance to energy savings and silence in the mooring areas, with the help of a large area of photovoltaic panels reducing the use of generators. There has also been a focus on space, and the great Sherpa has no shortage of it, beyond what you would expect from a yacht of this length. With almost seven meters wide, she exploits her middle to offer a maximum of living space. Indeed, the XL makes 221 m2 available to passengers. In this riot of space, the rear cockpit plays the leading role with 65 m2! From the huge swim platform, which can be submerged hydraulically at anchor, two staircases framing the XXL solarium lead to a spacious and convivial deck saloon, adjoining the dining area, which one cannot say if it is really outside or inside, insofar as it serves as a link with the lounge/wheelhouse space when its large picture window is open. If there is one point that should be emphasised, it is the ease of movement on board. The passageways are wide as are the gangways, and the Sherpa XL is treated in half-levels, sparing us the trap of long, steep stairs. In the saloon, we appreciate the large windows with electric controls as well as the wheelhouse, at the helm (sailboat style) from which the captain enjoys a field of vision that has little equivalent.

Half a deck higher, we are about to tread the teak of the sunlounge, a real invitation to sunbathe and enjoy a dominant view of the seascape through the chrome rail, while sipping a long drink served at the handy bar. A large canvas, stretched over four sturdy poles, can freely shade all the sofas and armchairs. We leave this place conducive to contemplation to descend two levels and access that of dreams, namely the cabins where very comfortable beds await the six or eight passengers. Yes, because the shipyard offers two arrangements giving the choice between three or four double cabins. The master (22 m2) is logically located amidships, whatever the layout, just as the VIP is forward, leaving the tip to the crew (two berths and a bathroom). Between the two, one or two twin cabins, each with its own bathroom. In the four-cabin layout, the kitchen is in the living room, while in the three-cabin version, it is in the lower deck, gaining thereby space. As for the owners, they have a very large bathroom of about 8 m2! As for the decoration, it creates a luxurious and subdued atmosphere, combining noble and refined materials: wooden claustras, leather-covered headboards, soft carpets, partitions and lacquered furniture with mirror effect, stainless steel, refined lighting… And, as usual, the finish is impeccable. On a more technical level, we will note the presence of a deep garage for a semi-rigid tender of four meters, in front of the engine room, opening to starboard, which is rarely the case on a yacht under 24 meters. With its optimised hull design and the IPS transmission of the Volvo 800 hp, the top speed is 20 knots (18 knots when cruising) and the range can extend to 1 400 miles, if we reduce the speed at 10 knots. Arcadia estimates the consumption economy to be almost 30%, compared to that of competing yachts. There is also a more powerful version still Volvo Penta, either 2 x IPS1350 or more prosaically 2 x 1000 hp for a maximum speed of 23 knots. 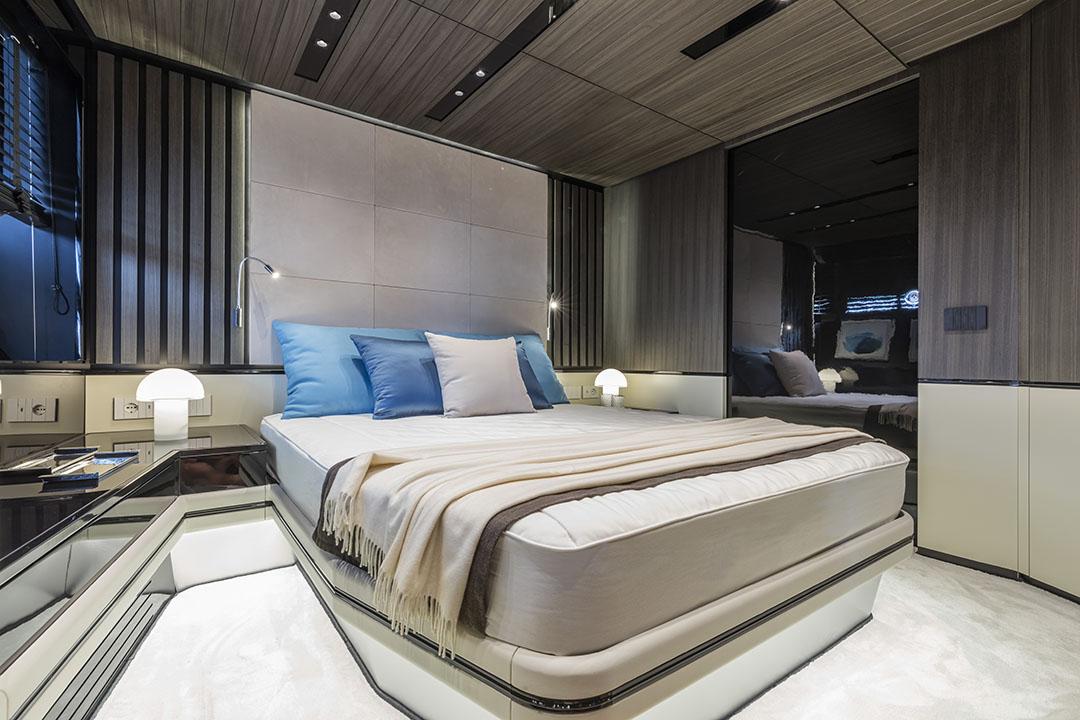 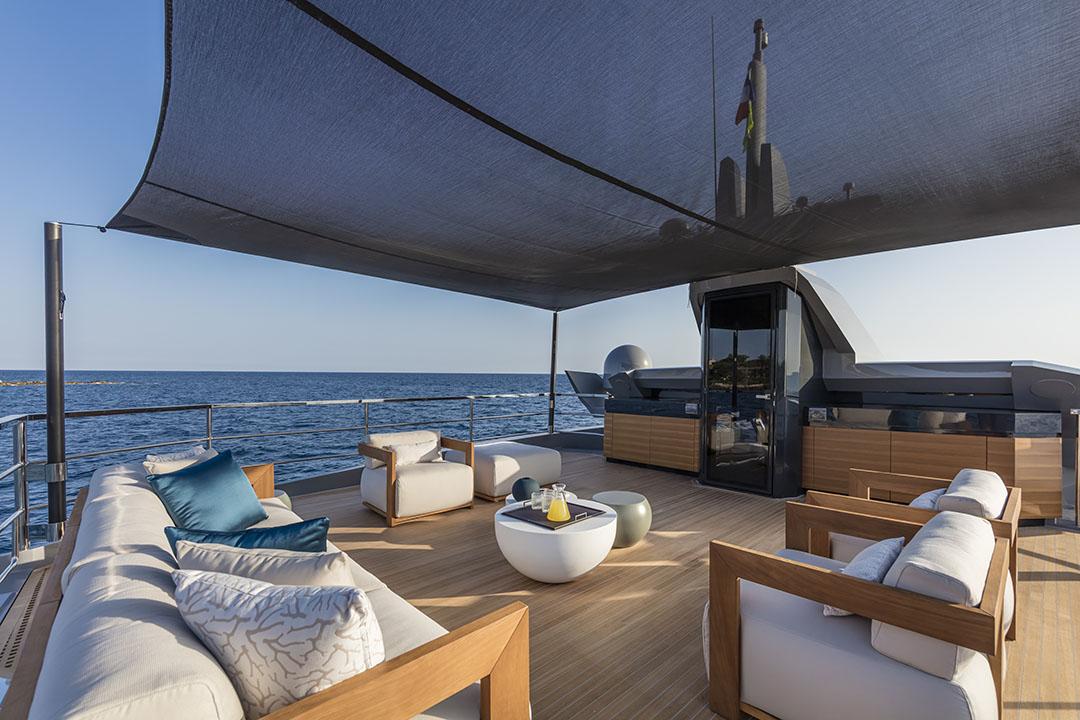 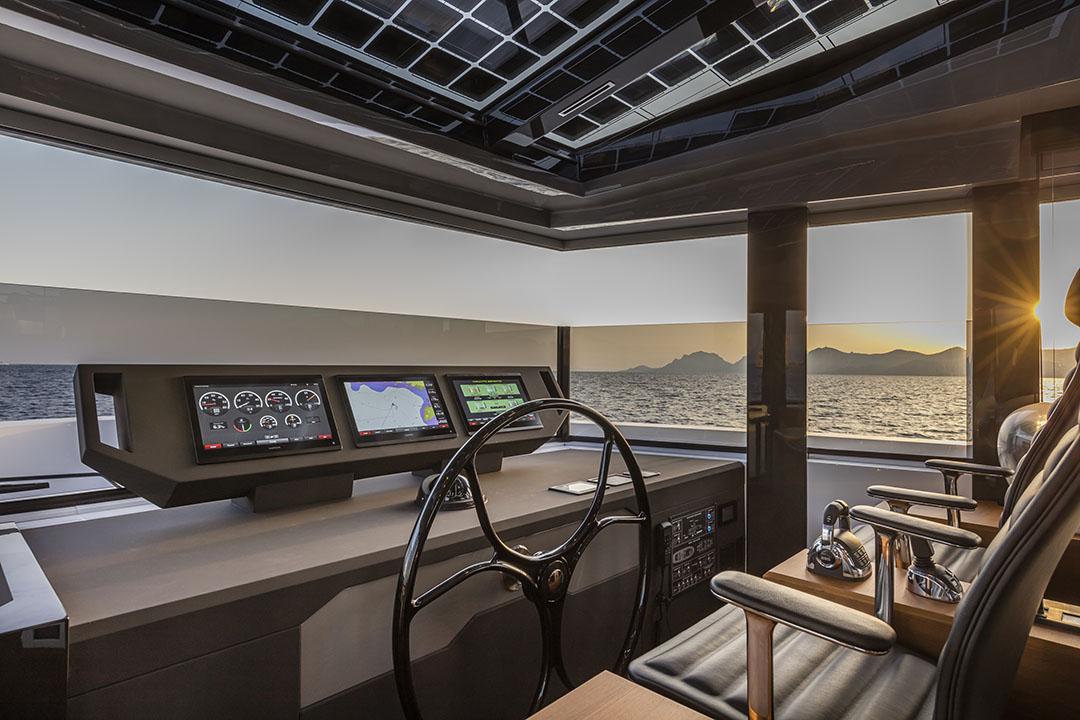 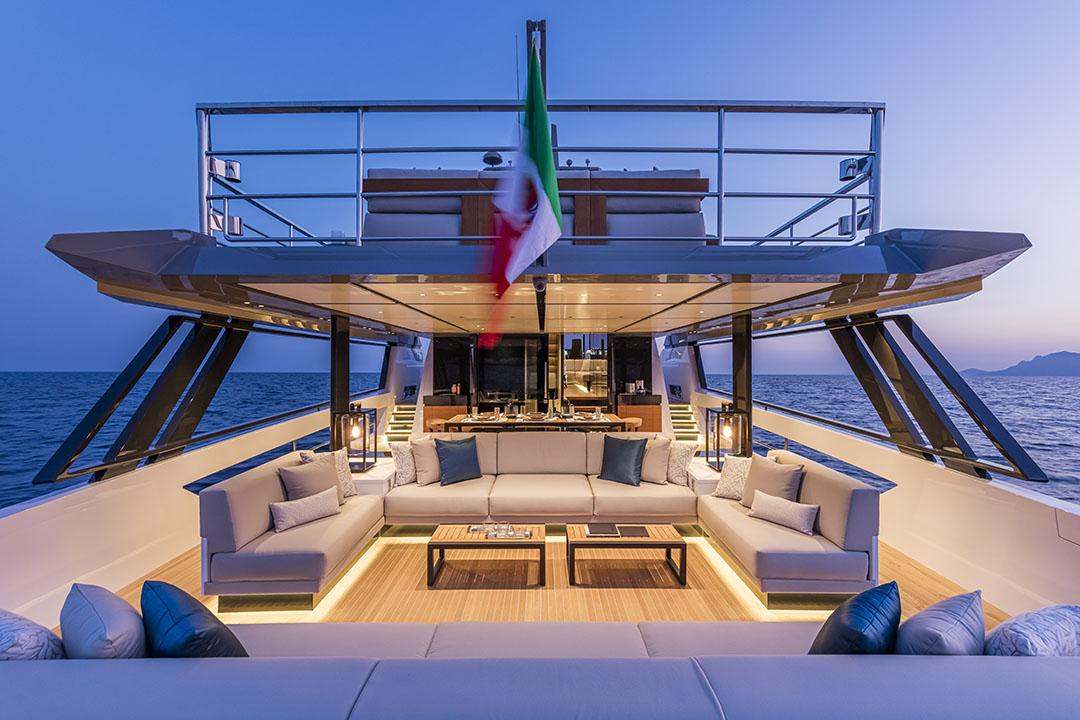 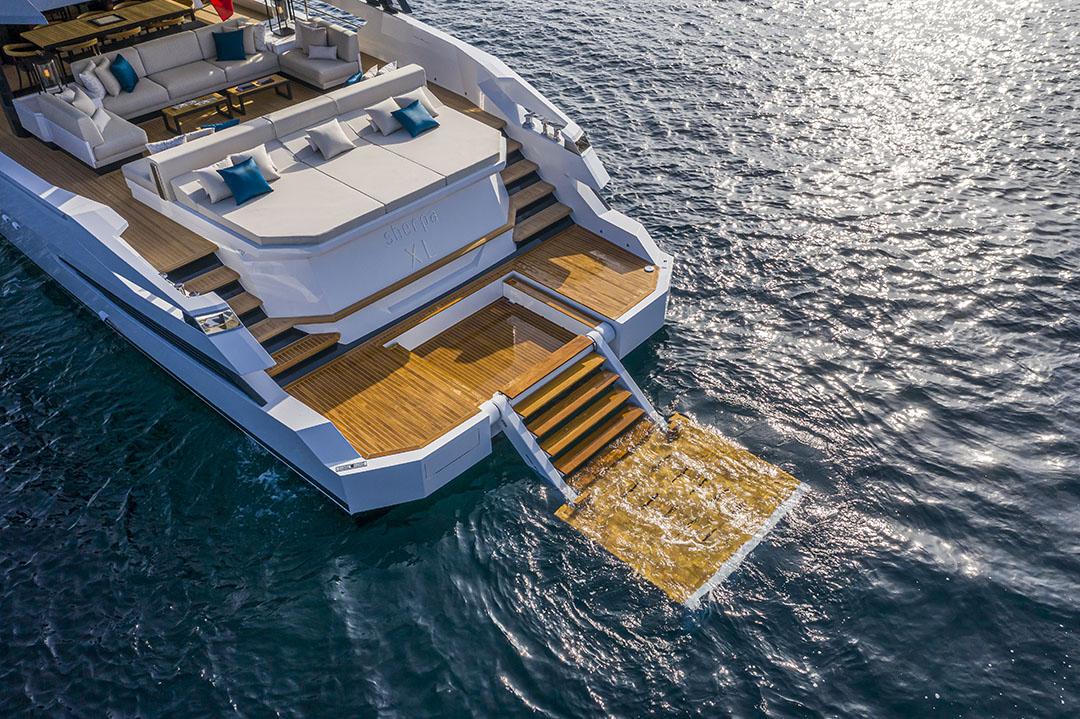 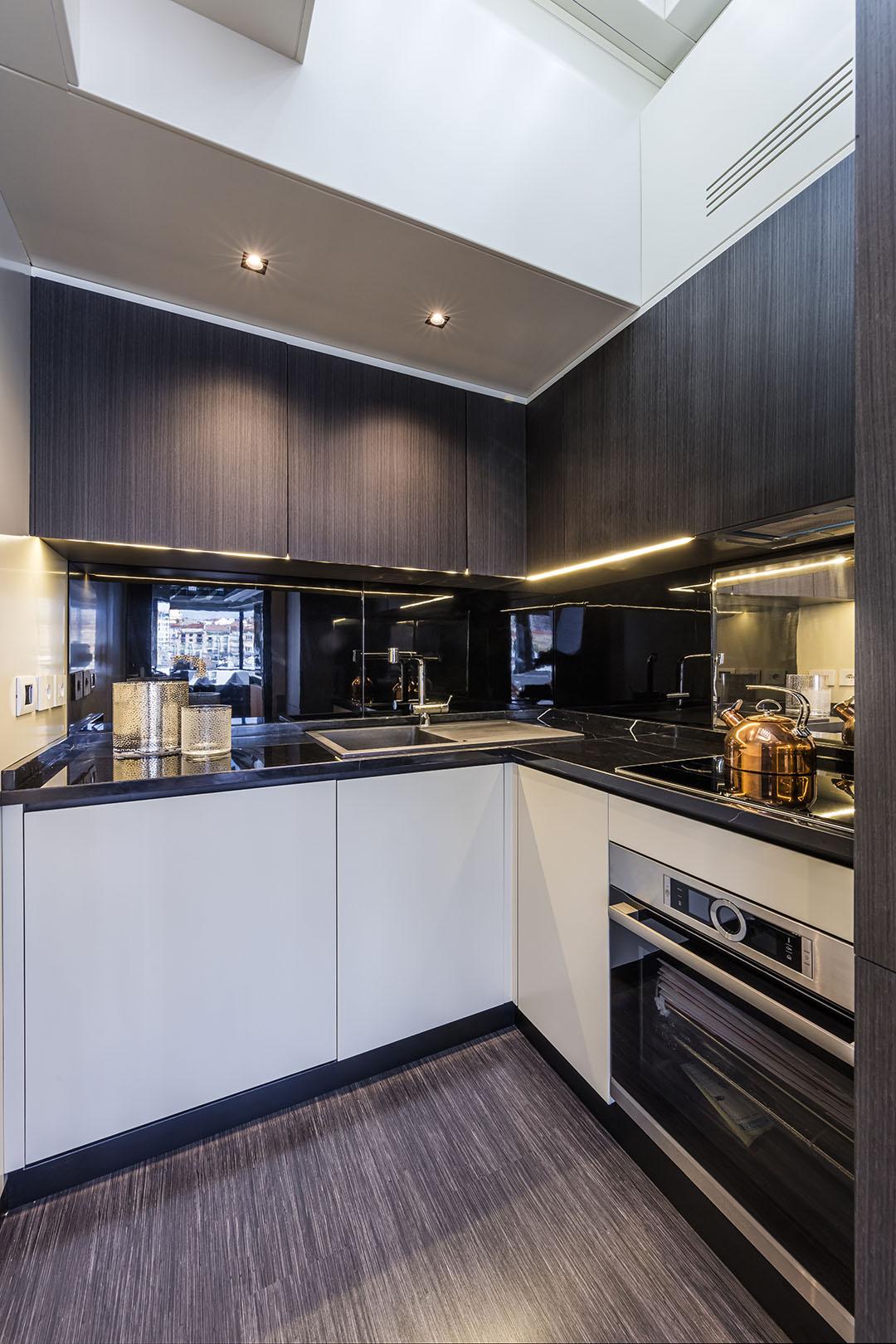 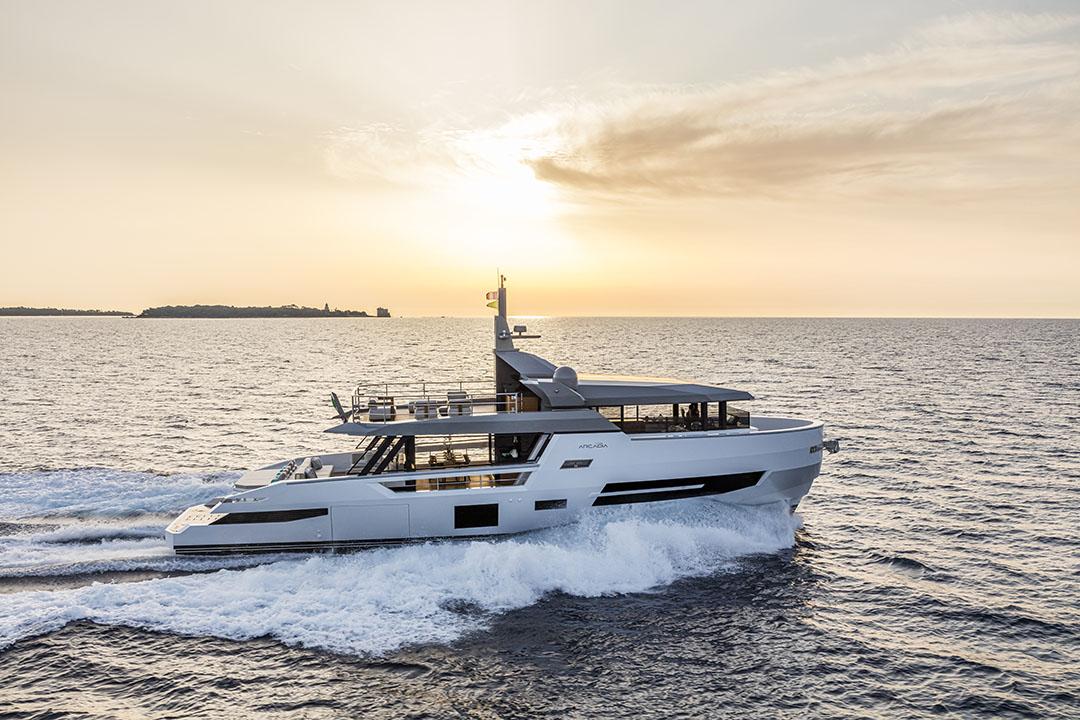 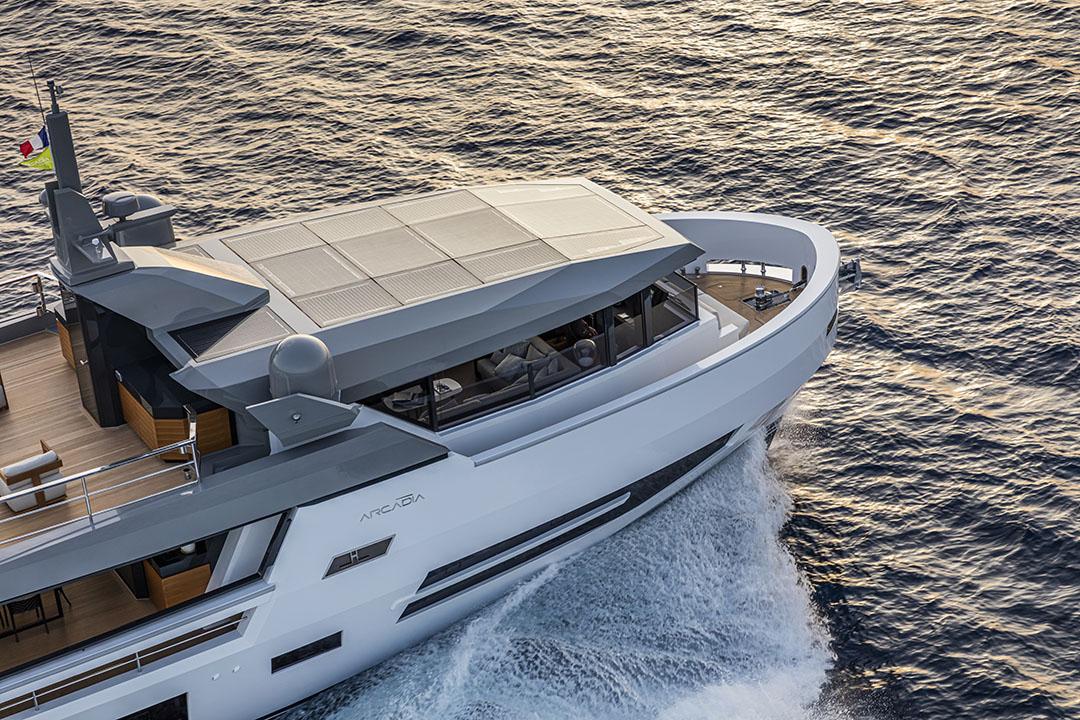 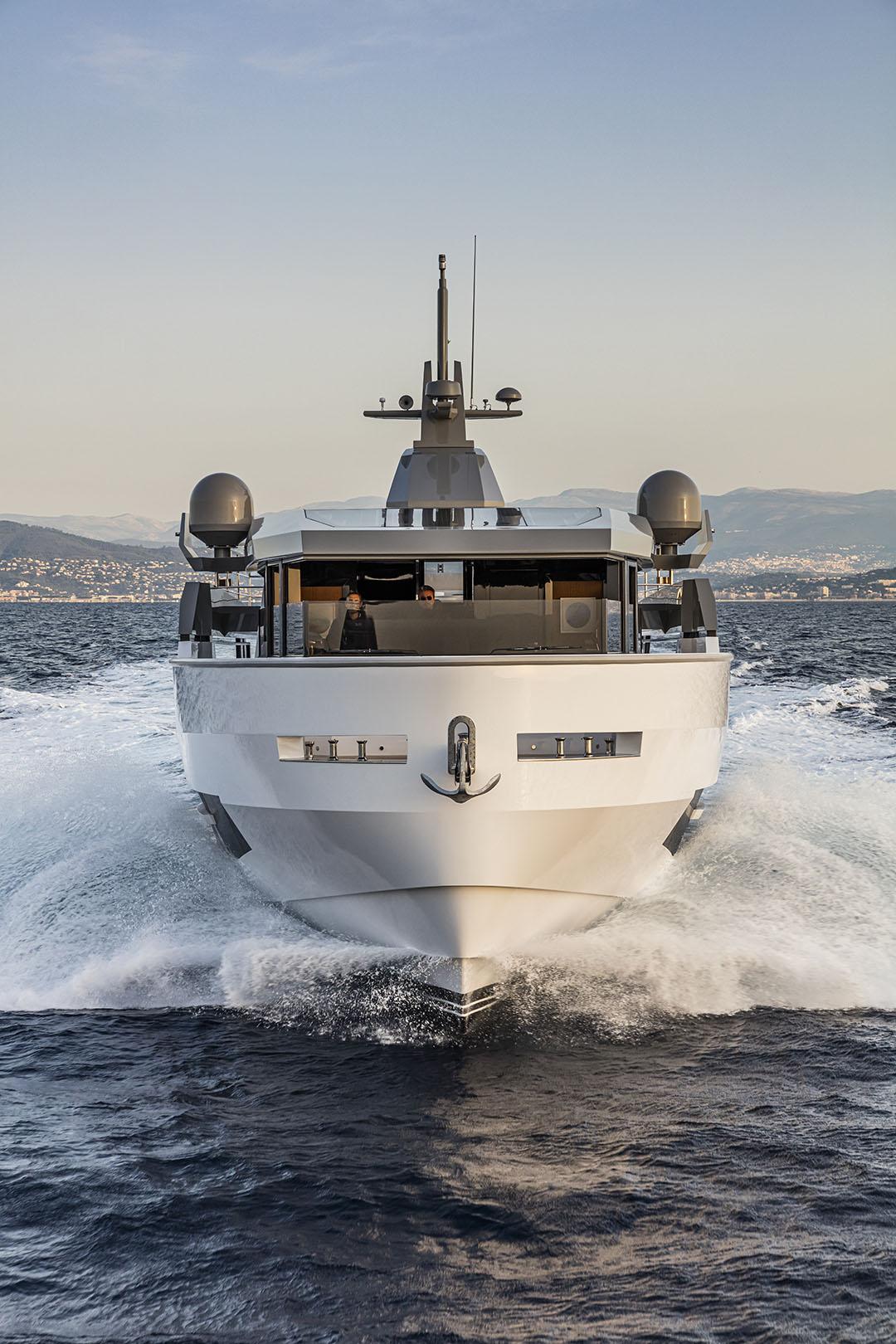