This brand new Tempest replaces the first 900 Sun, with additional assets. This update is concretized by a more spacious, user-friendly and ergonomic deck. Be it equipped with one or two engines, performance will be on the programme.

Significantly longer and slightly wider than the old one, the new 900 Sun provides guests with this additional space, which results in two more generous solariums and a more convivial dinette, plus a wider helm station and the larger console. The big U-shaped settee occupying the entire stern can accommodate up to six guests for a snack at anchor. Once the meal is over, the table can be lowered electrically to create a large solarium whose surface just as big as the vast sunbed on the bow, even with its extension. As on the previous model, the indented backrest of the settee facilitates the move towards the swim platform, which is particularly spacious due to the single-engine propulsion of our test boat. Note that it was also designed to accommodate two outboards with a maximum certified power of 500 hp. In our case, the transom houses the most powerful Yamaha outboard engine: the V8 425 XTO. Why Yamaha and not another brand? Because Yamaha and Capelli have had an exclusive partnership for over 20 years. As a result, you will never see a Capelli with another brand… But let’s go back to the deck layout that allows an easy circulation from the stern to the anchor equipment, integrated in an elegantly designed polyester stemhead. It houses the electric windlass and its foot controls, while the anchor is mounted on a tilting davit. Two chocks hold the mooring lines struck on two strong fixed cleats. The stern is equipped with two identical cleats, fixed on the gunwales. The storage capacity has also been increased on this new 900, and it is worth noting the two watertight bins located under the side seats of the aft bench. But the most significant evolution is the helm station. First, it boasts a two-seater leaning-post integrating a kitchen cabinet with a large sink and a stainless steel fridge. There is also the two-person pilot seat with its flip-up half-seat, and the much more spacious dashboard that can integrate one or two large-screens. Finally, there is the console with its high windscreen effectively protecting the pilot and co-pilot and its front opening leading to the day head with sink and marine toilet. The two-person settee, molded on the front of the console, will be appreciated in calm seas. The optional T-top and the awning stretched between carbon-like poles can shade a good part of the deck. Another asset of this new version of the 900 Sun is the level of workmanship (construction and finish) that enhance the perceived quality at first glance.

The 900 Sun is easy to handle. Its stability (rigorous course keeping and no rolls at maximum speed) immediately gives the pilot confidence. On a calm sea that did not allow us to have a definitive opinion of this Capelli’s seaworthiness, we took advantage of her manoeuvrability to complete a series of turns at different speeds and radii. Trajectories were precise thanks to an even internal heel and a firm, yet not too aggressive grip. On the other hand, an inappropriate choice of propeller (the 21″ pitch is too long which results in under-revving of the engine) caused the XTO to lack punch when exiting a curve. We also had this impression during lift off (7”4!), which was a real contrast compared to our previous experience with this massive V8 aboard other RIBs (Capelli in particular). The missing 600 rpm at full throttle also penalised the top speed, which only ‘peaked’ at 45 knots. Which is well below the figures Yamaha’s technicians have reached with a shorter propeller (18″): 52 knots… For a group use, with a large crew, we recommend the package with two 200 hp, which should withstand the load and has a more attractive priced (132 516 € before taxes). 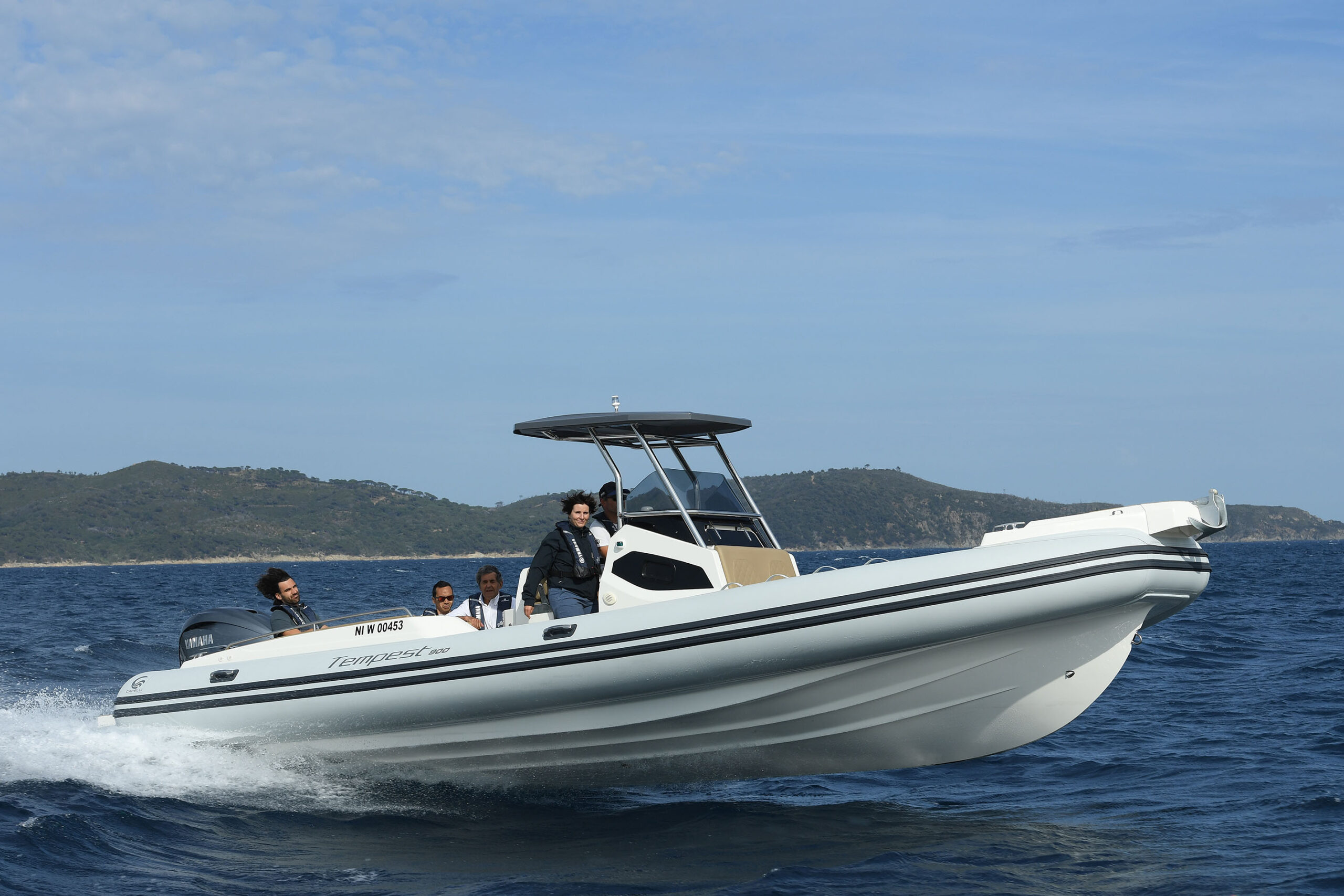 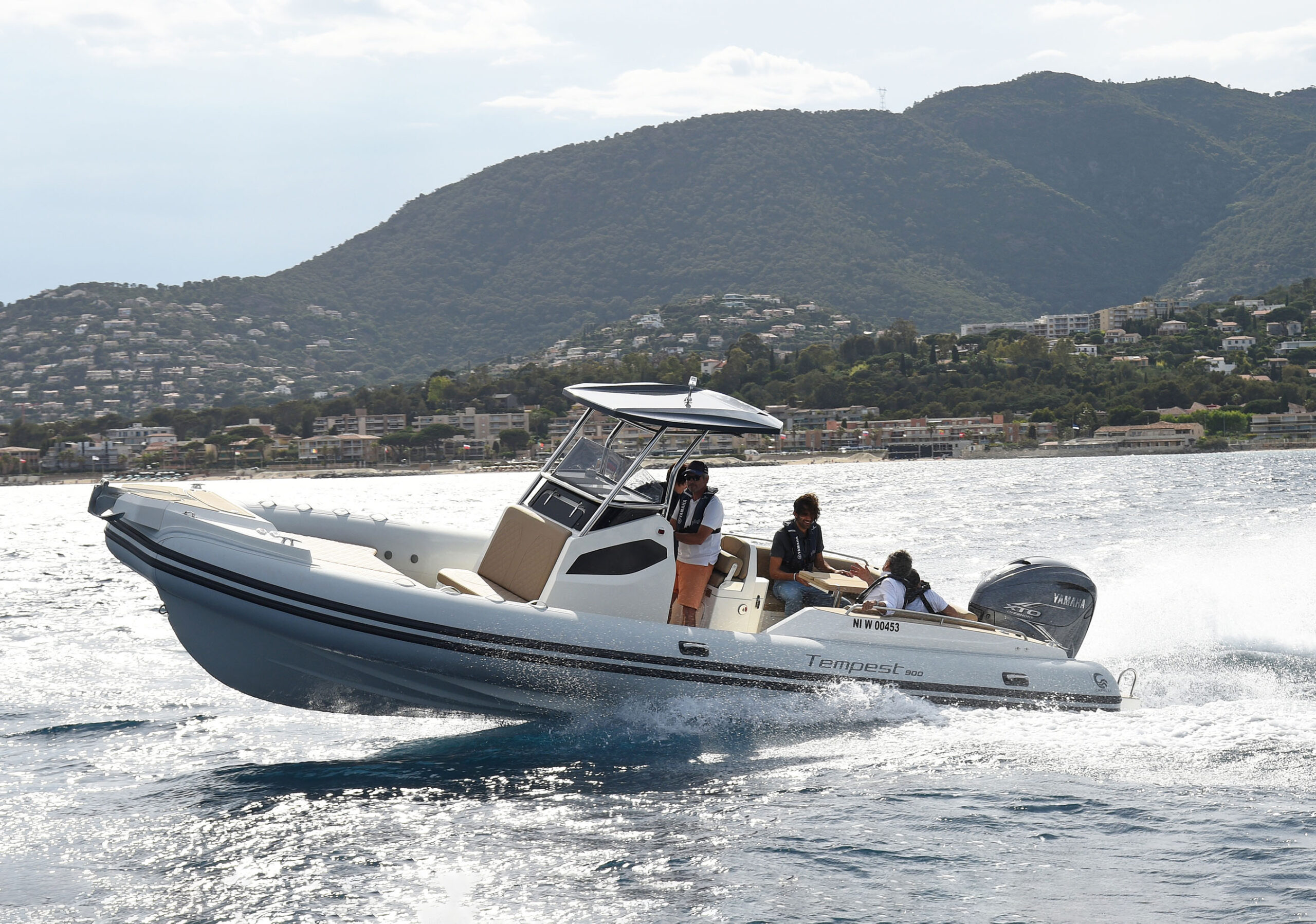 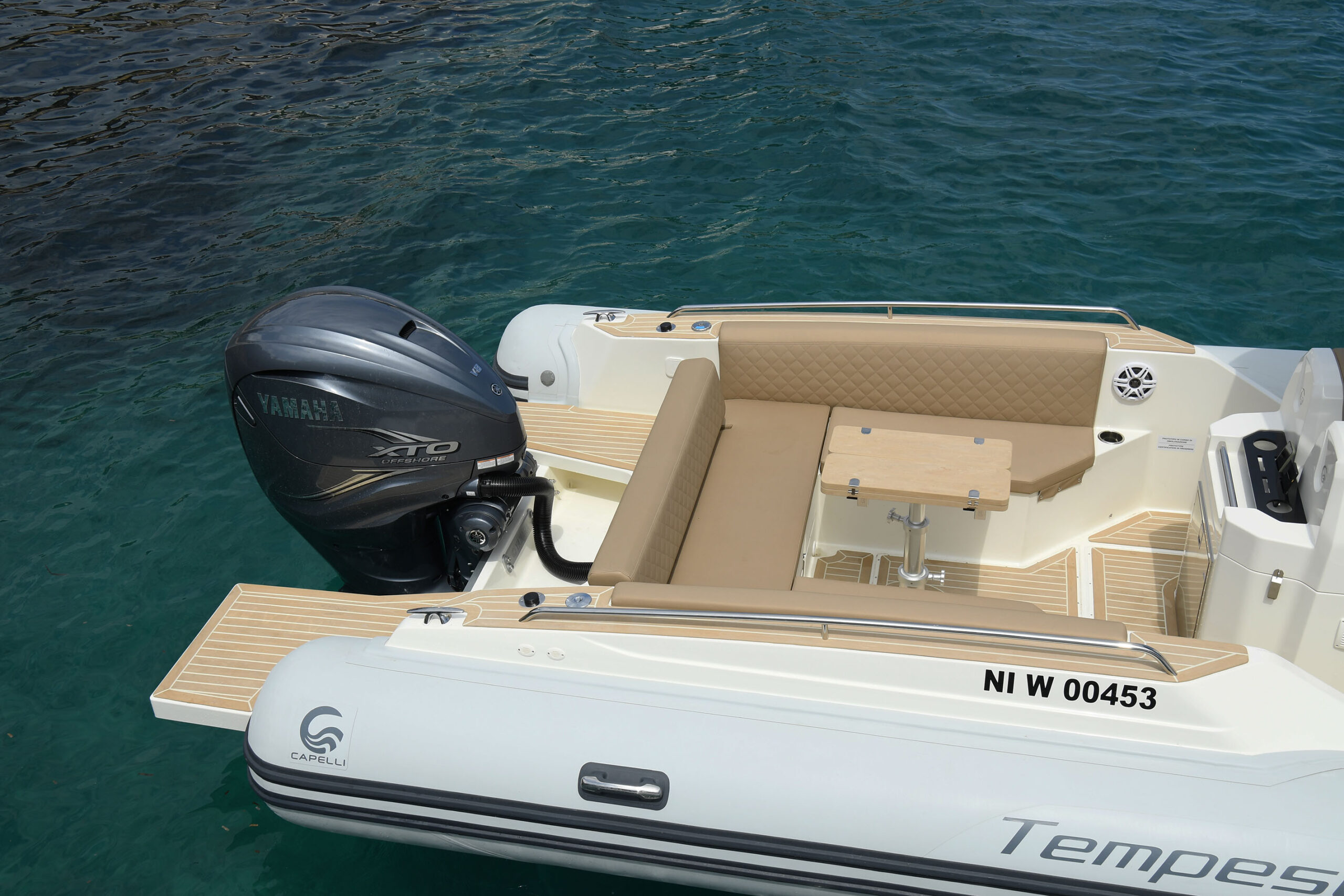 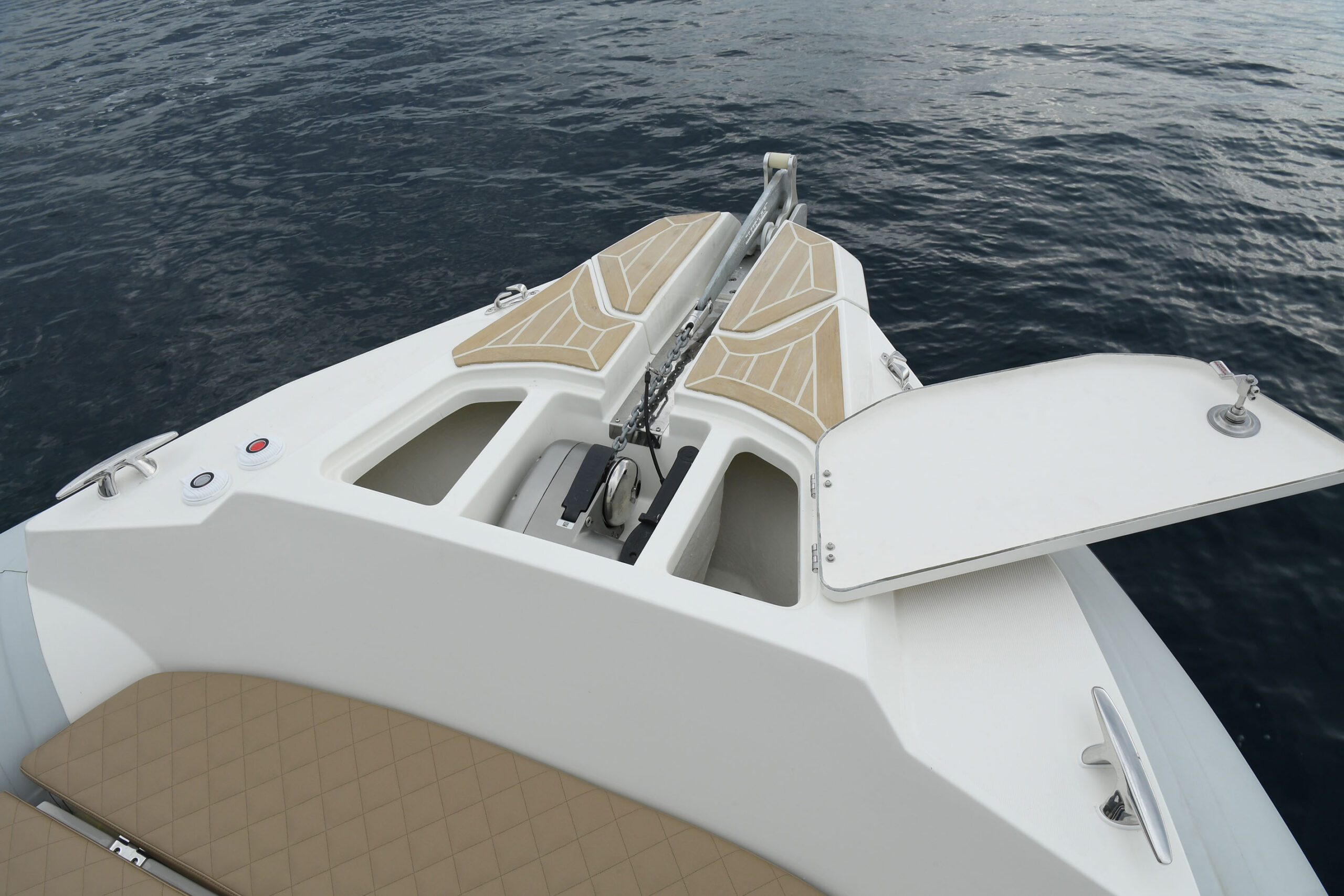 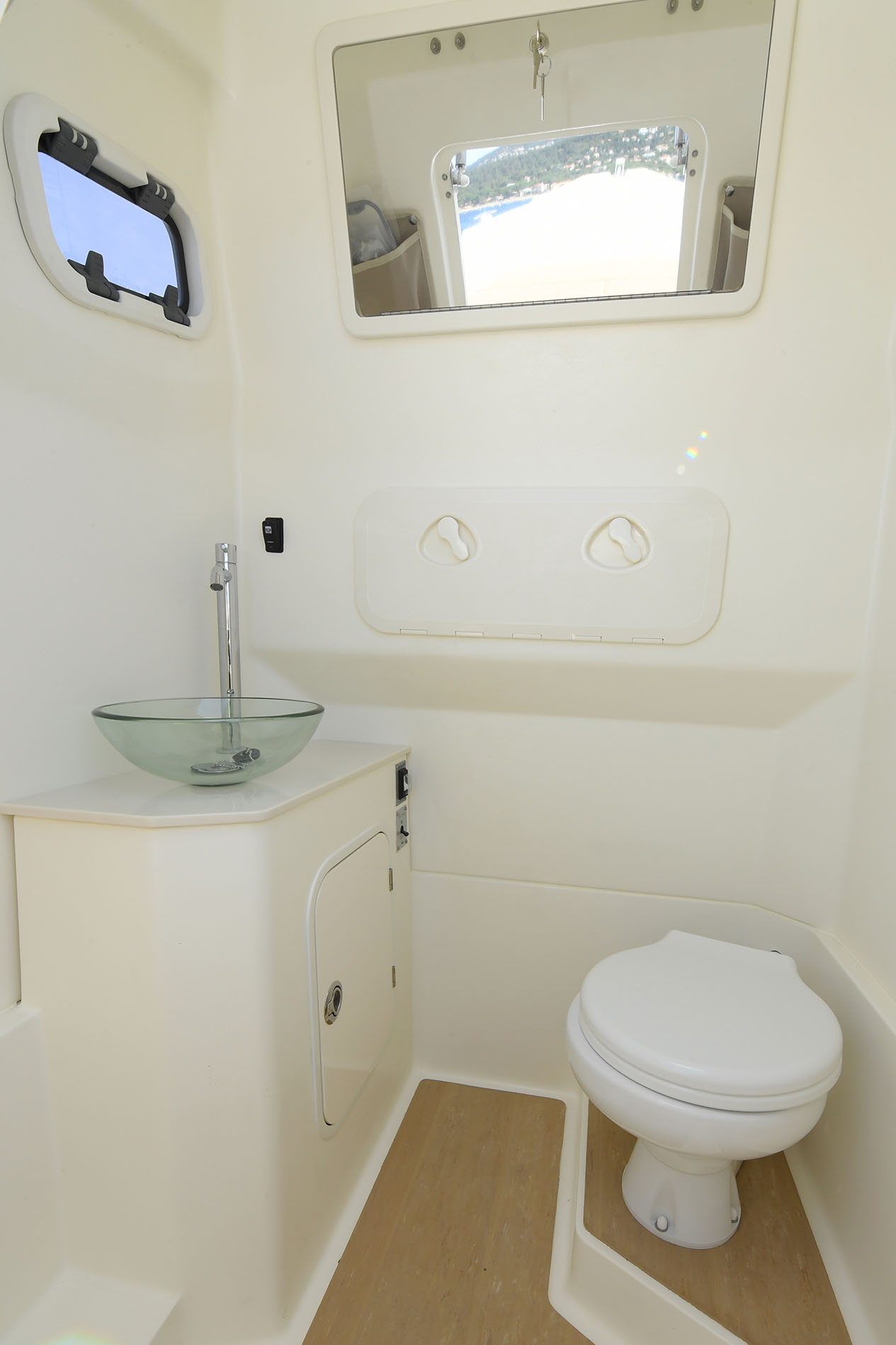 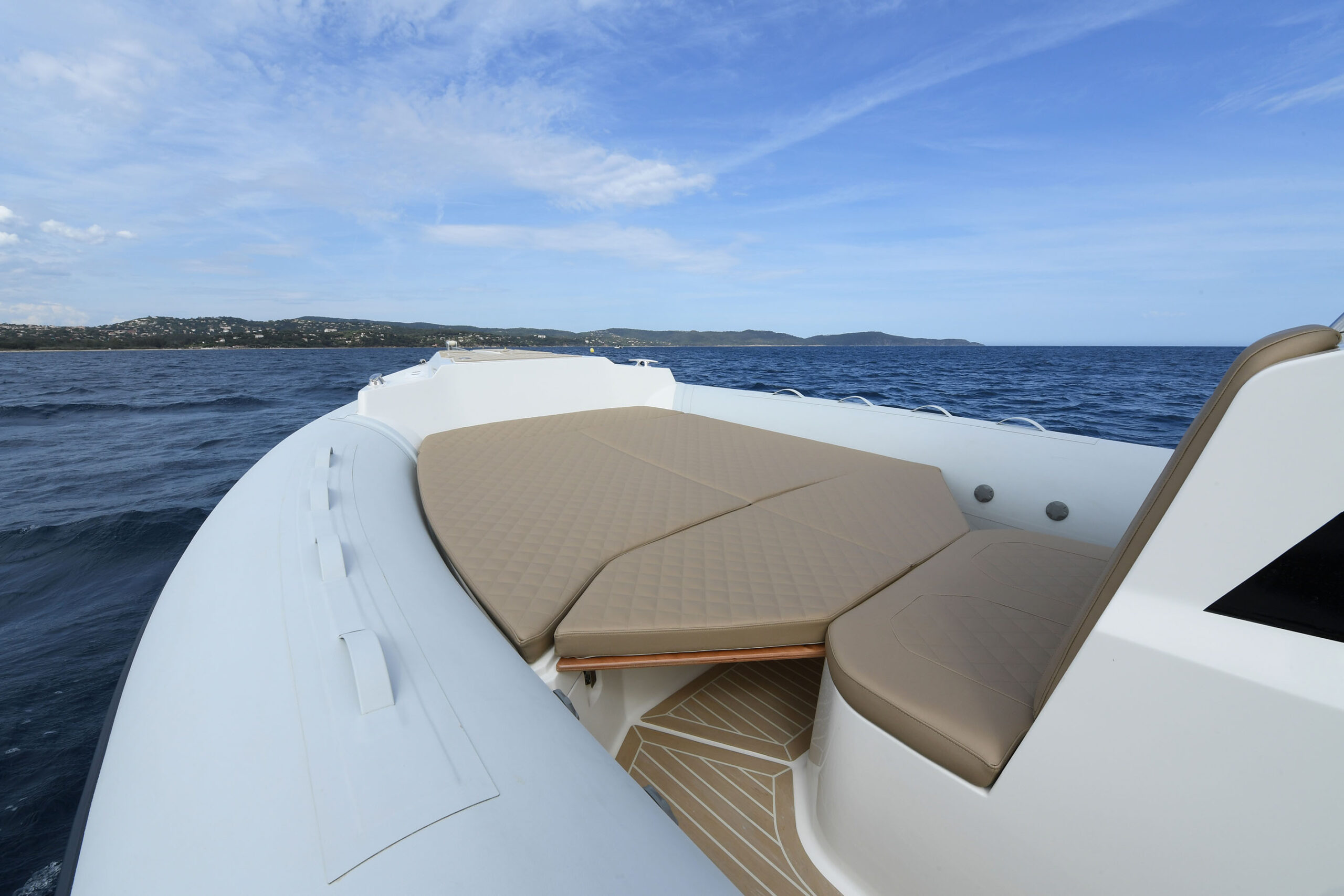 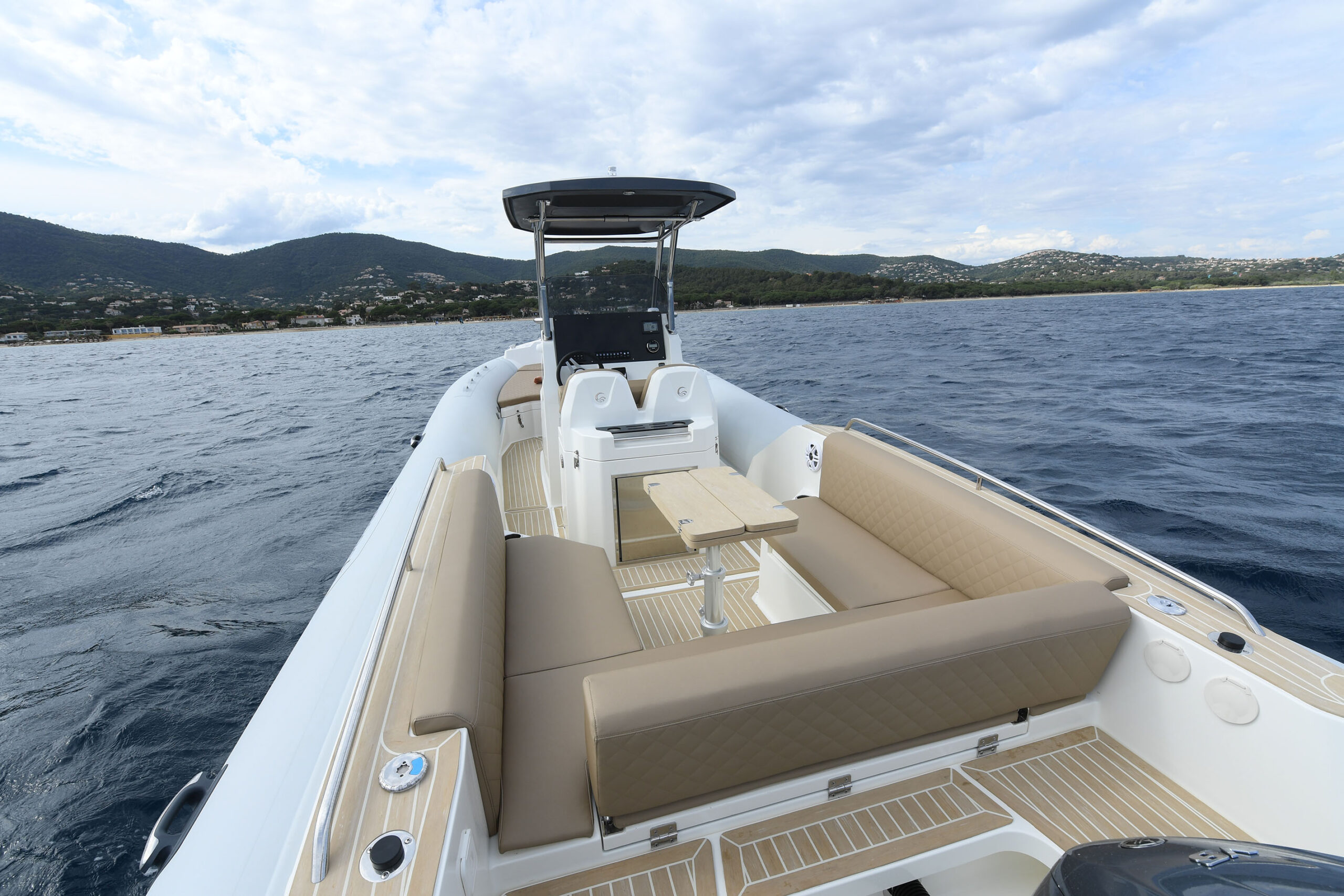 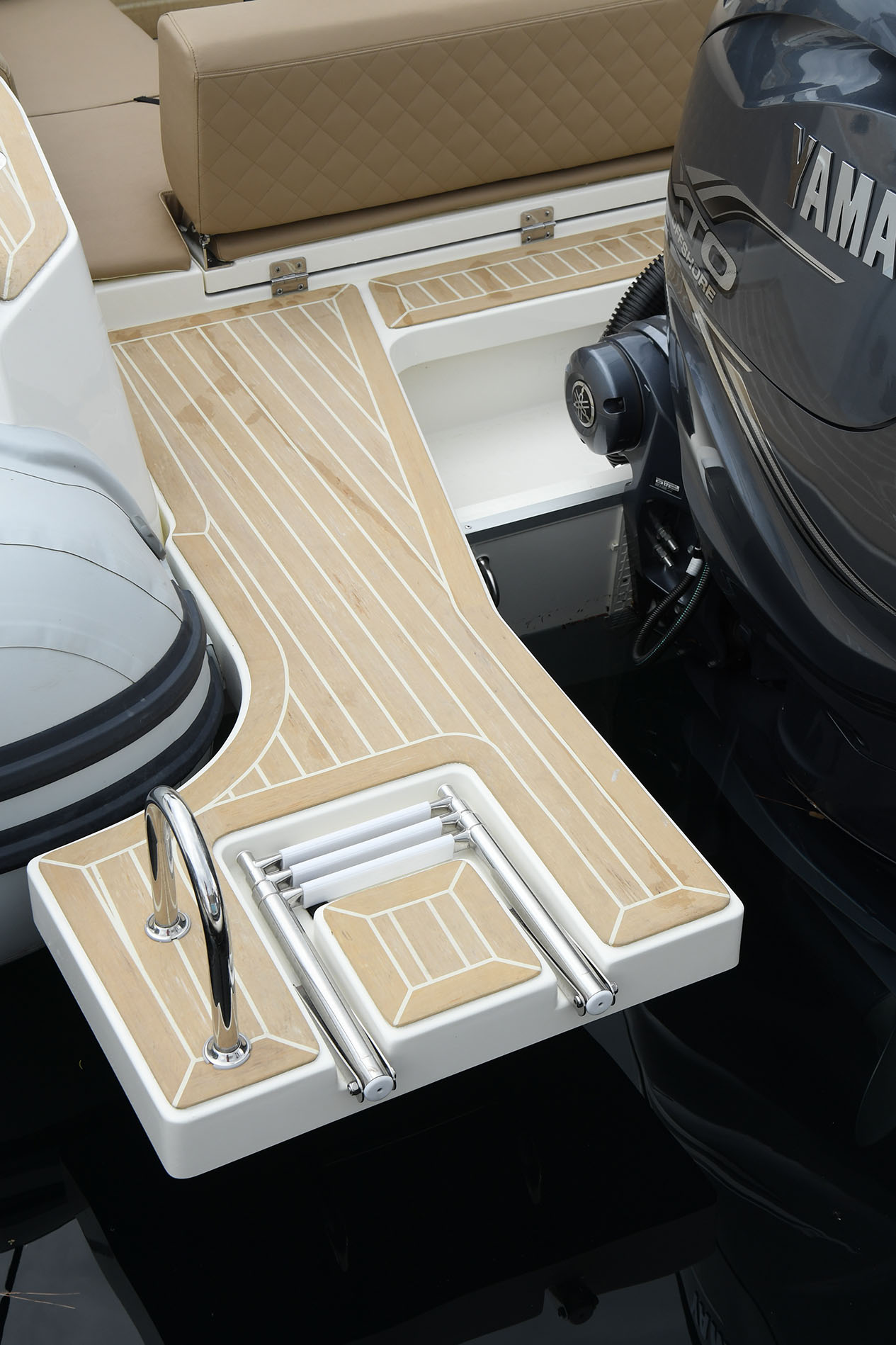 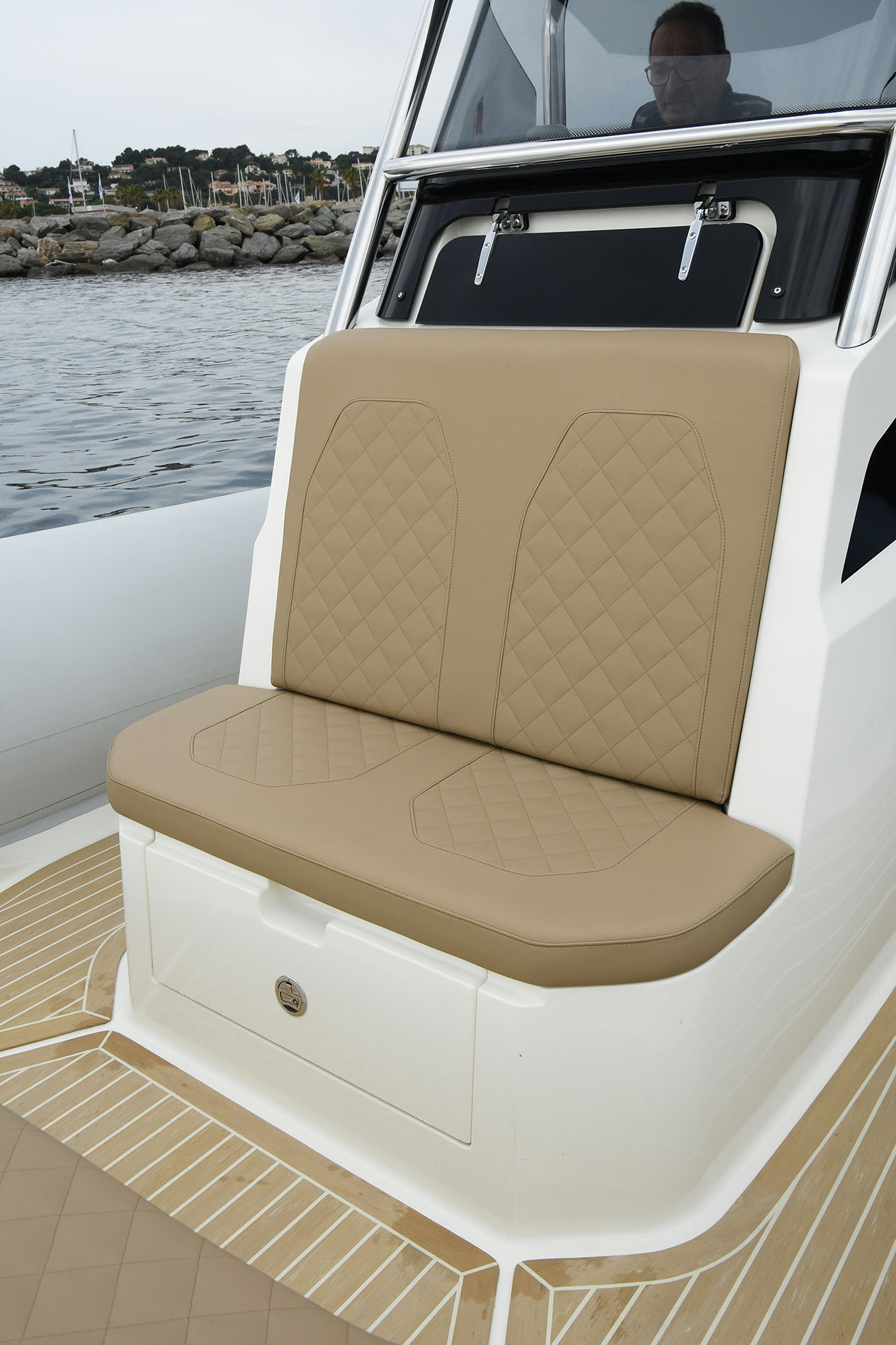 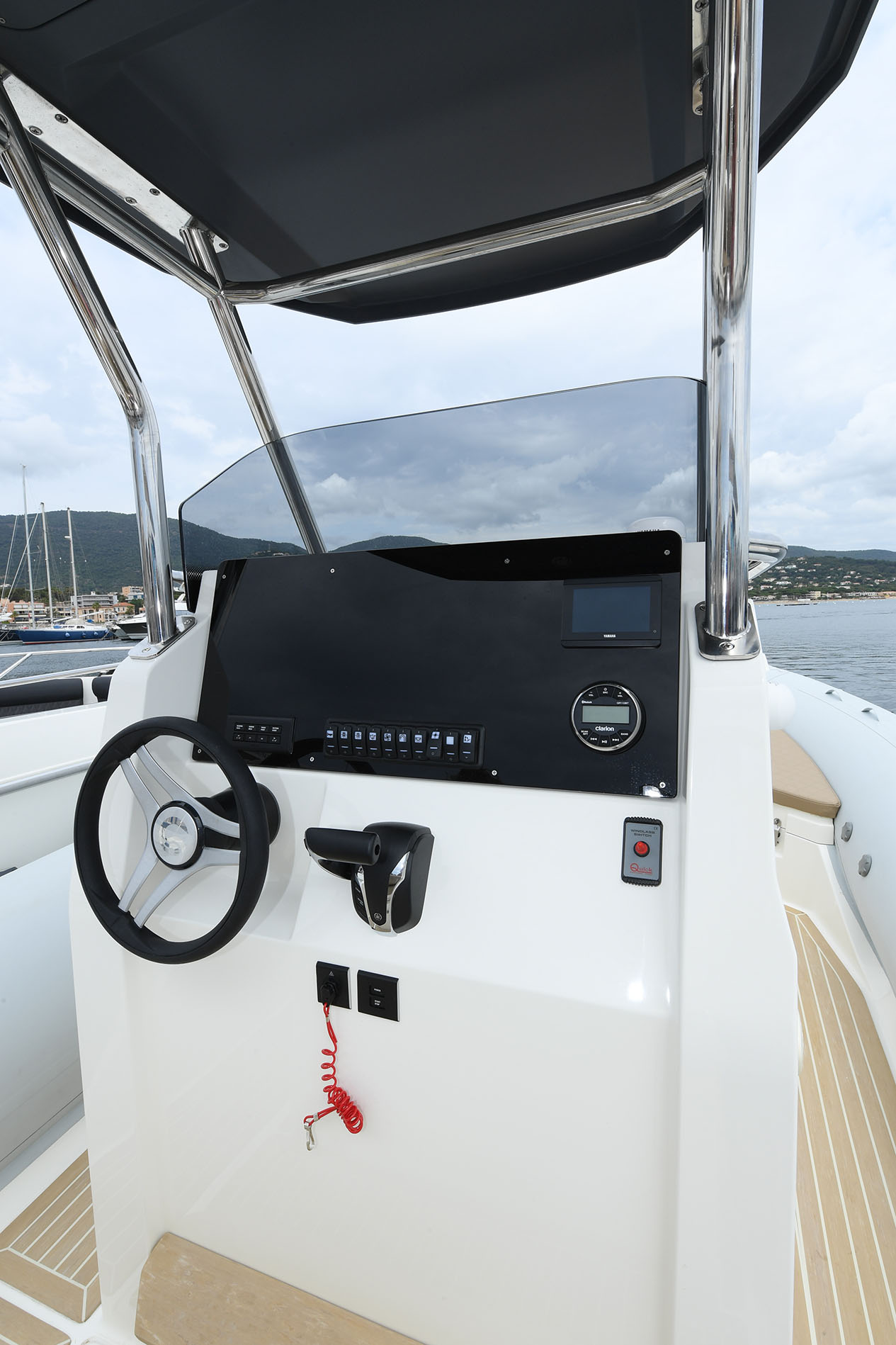 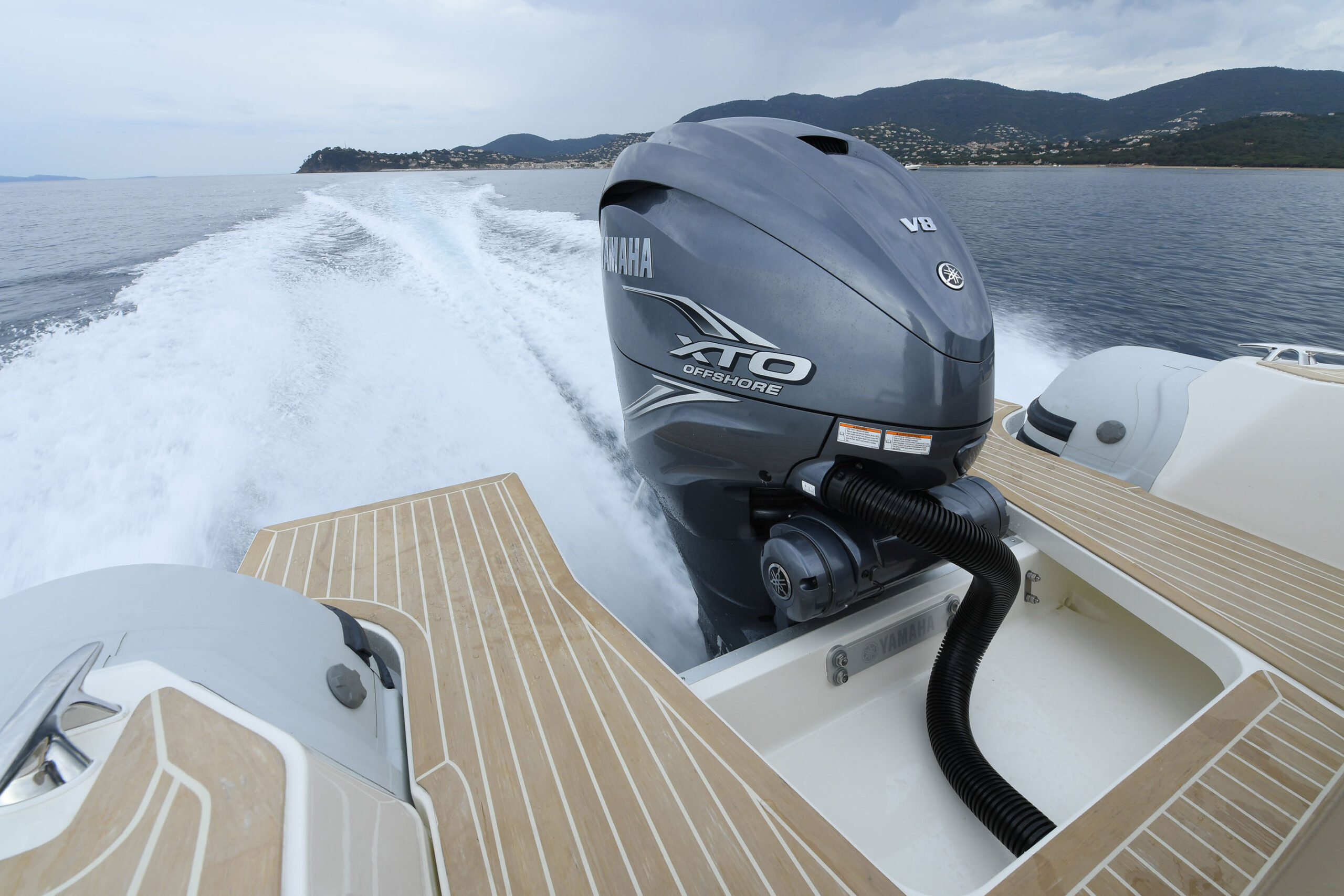 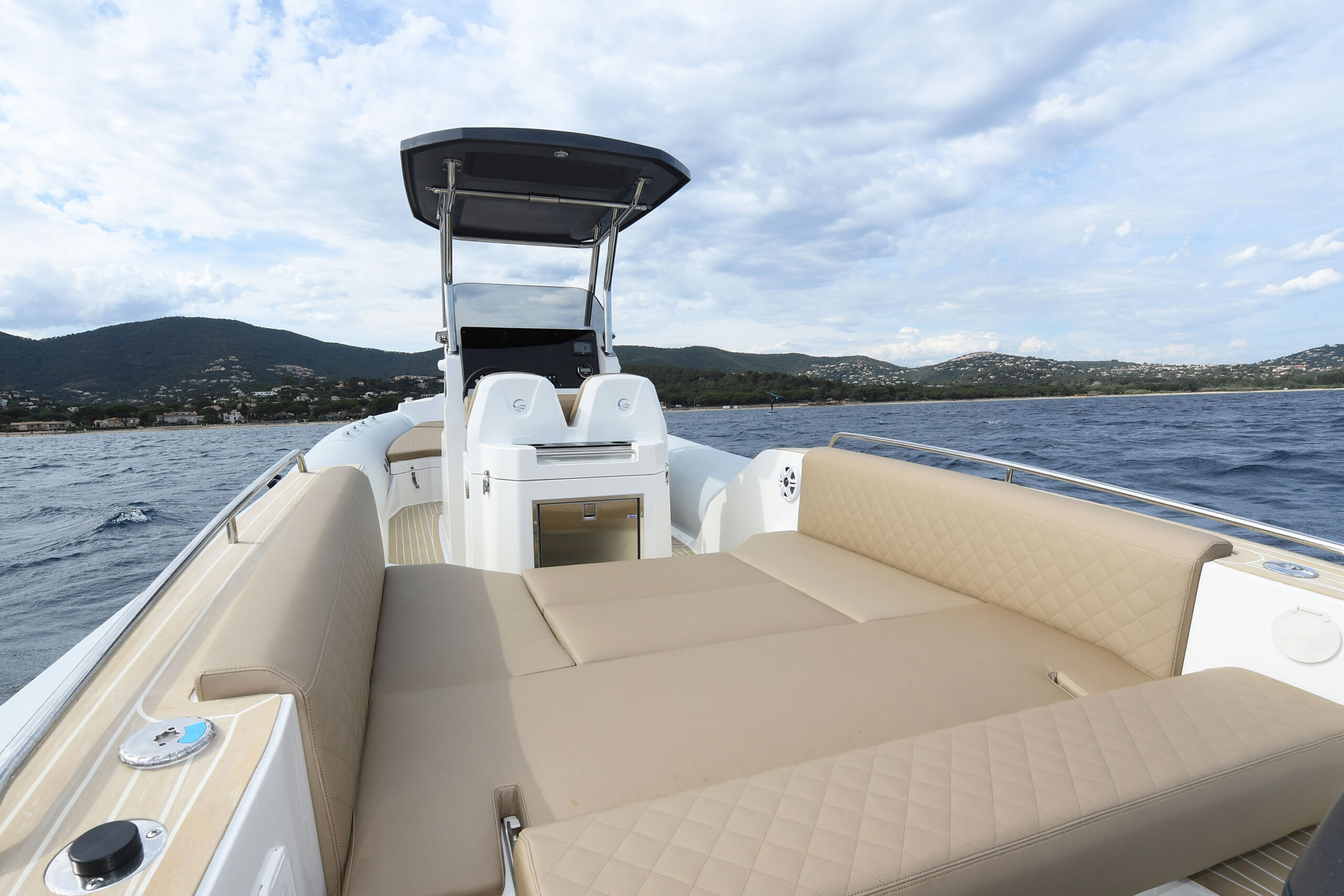 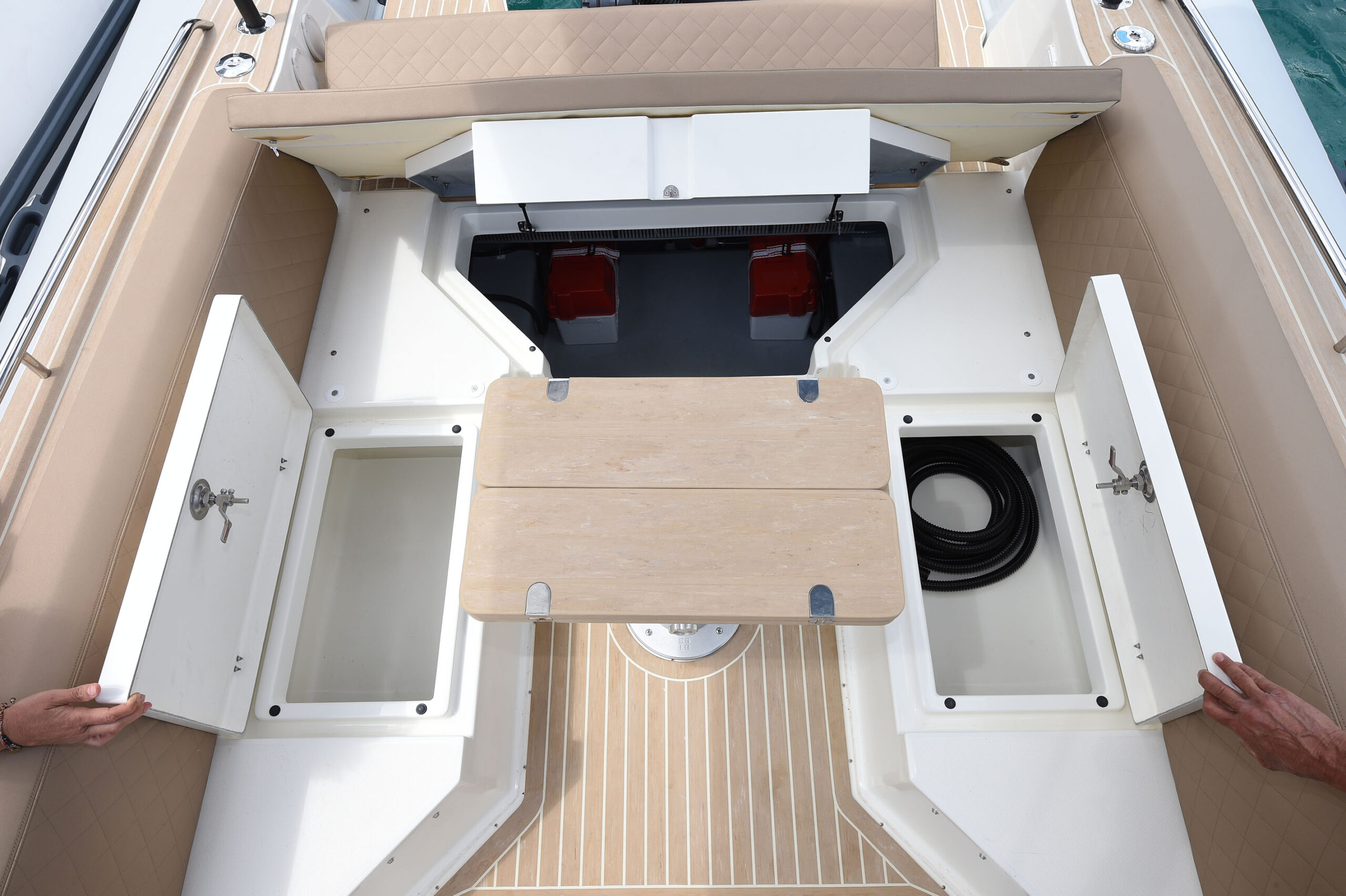