From September 8th to 11th, the Yacht Club de Monaco hosted its 15th Monaco Classic Week and offered a journey through time to discover the Principality’s rich nautical heritage.

Through a happy coincidence, the biennial Monaco Classic Week (MCW) has escaped the vicissitudes of the Covid-19. No cancellations, no postponements. After its traditional year off, the event organized by the Yacht Club de Monaco (YCM) was back in September for a slightly more intimate edition, due to the pandemic. “We have selected the boats. We wanted to make it more convivial rather than having a large fleet of boats, which we knew would be a bit difficult to do anyway. We chose to present older boats, with only wooden masts”, explained Thierry Leret, the event director and manager of La Belle Classe Tradition at the YCM, before reminding: “Our characteristic is to have motor-yachts, power boats, sailboats.” In total, there were 79 boats, including 9 motor-yachts, 20 Dinghies 12′ (the first one-design sailboat of 12 feet), 17 power boats and 33 classic boats divided into four classes: “The big boats, whose deck length is over 23 m. We also had boats from the ‘Vintage Marconi’, which are over 50 years of age with jib-headed sails, known as Bermudan, and those from the ‘Vintage Gaff’ with square-rig sails. As for the classics, these are boats over 25 but under 50 years of age”, Thierry Leret explained. And this beautiful armada welcomed a few regulars, like the magnificent century steam yacht old SS Delphine, whose godmother is none other than Princess Stéphanie, the MCW winners 2017 & 2019, Viola (1908) and Puritan (1930), Moonbeam III (1903) or Orion (1962), present at the very first edition in 1984. And let’s not forget Tuiga (1909), the YCM flagship, and her sisterships Mariska (1908) and The Lady Ann (1912).

A year of novelties

After a beautiful 2019 edition placed under the Star-Spangled banner, this year honored heritage and history. This theme is no coincidence as the Principality is commemorating the 100th anniversary of the death of Prince Albert Ist (1848-1922), its “Navigator Prince”, whose pioneering character, oceanographic explorations and passion for science played a major role in shaping the country and its yachting. For the occasion, the MCW hosted for the very first time an exhibition entitled ‘Powerboat Meetings in the Albert Ist of Monaco era – Yacht Club de Monaco’s collection restored’, which contained nearly sixty objects – medals, lithographs, posters, photographs, old postcards … – the public had never seen before. The result of a year’s work, led by Caroline Magro, the head of the YCM heritage department, that involved “documentation, inventory, restoration and coordination of this rehabilitation campaign. We also produced a five-minute documentary on the restoration process, an application on tablet with enriched contents to go further in the discovery of the collection. There were also all the stenographic part and the writing of contents”. To make another nod, a 1952 hydroplane Cessna C305, from the Aeroclub of Como, landed in the Monegasque bay before joining the YCM pontoon. A unique event, organized with the very young Hydravion Club of Monaco, “Let’s not forget the history of power boats is deeply connected to that of the seaplanes”, Thierry Leret reminded.

Among the novelties, there was also this Friday spent in Cala del Forte. Monaco’s third port, officially inaugurated last July, welcomed the crews of the sailing boats for lunch: “It was nice to make a nod and bring historical boats to a completely modern port, which has just opened and thus has no history, and in a way to fill with life this marina with nautical activities”, the event manager said. Especially since the day, which included a round-trip regatta of 7,9 nautical miles (14.6 km) separating the two ports, provided great sailing conditions for the crews of the sailboats. “We had strong conditions, from 20 to 25 knots. There were some damages, including a dismasting… It’s always a bit tricky because these boats are a bit like Stradivarius. They are old wooden boats, fragile, just restored, almost museum pieces. Racing on them is already a bit of a challenge. In extreme conditions, it’s a bit crazy, but they are all passionate, unreasonable people who are very proud to sail in these conditions.” These conditions, unfortunately, prevented the power boats and the Dinghies 12′ to be part of the trip. “The sea was too choppy. The sailboats are more seaworthy and were able to make it. But it was too delicate or the power boats, plus it would have been uncomfortable”, the race director explained.

The day before, for the first day of the regatta, the Monegasque bay – known for the whims of Aeolus – had already offered rough sea conditions, leading the race committee to cancel the sailboats and dinghies regattas. “We have to be reasonable; we are not here to break boats either”, the race director underlined. However, moping around or going back to the hotel was out of the question. After these past few months, many of the participants were happy to stay ashore to catch up, while the waterbody hosted a few activities. Some crew members swapped their official outfits for swimsuits to take part in an improvised paddle contest, under the unbridled cheers of their crew members and the other sailors. A perfect way to keep everyone busy and happy, while a few meters away, power boats also took advantage of the safety of the port to have the maneuverability contest, before a crowd of enthusiasts and curious on the wharf. A moment “with a good spirit”, as Steve Sandrin, in charge of the activities of the power boats, confided. “To show off and for their fun too, we ask them to compete. There is the maneuverability event which consists in several tests. There is first ‘a man overboard’, which requires to pretend someone has fallen overboard and manoeuvre to retrieve them. Then there’s the mooring technique, where the boat has to get to a buoy, to catch it as if she wanted to moor and the last one is a reverse on about 30 metres, knowing that, backwards, these boats are not the straightest!” And the next day, while their companions were in Cala del Forte, the power boats who remained in Port Hercules participated in the first “Classic Week license”. “This ‘license’ was an initiative of our General Secretary, M. D’Alessandri, and mixed both cultural questions, on boats, on maneuverability obviously to make a little wink. There was also some on maritime knowledge,” Thierry Leret explained.

The highlight of the event was on the Saturday. After a busy day of regattas for the Dinghies 12′ and the elegance contest, all the participants took part in the parade the Oceanographic Museum to the Larvotto, led by the SS Delphine. “L’Art de vivre la mer”, so dear to the YCM, in all its glory. As this is first the essence and specificity of the event. “The Monaco Classic Week is not a gathering during which the boats only race,” recalled the manager of La Belle Classe Tradition. “We promote the work of maintenance and restoration as close as possible to the original, the crew’s knowledge of naval etiquette, but also the owner, the captain or the shipyard preserving these boats. Because it would be easier to have a modern unit or to make them comfortable. Owning a wooden boat, with all the maintenance, varnish and care it requires, is complicated. We must honor and acclaim them to restore old units to pass them on to future generations”, Thierry Leret underlined. To honor this heritage, the MCW also has a few contests, like the Chefs competition, led this year by Mauro Colagreco (Mirazur), or the elegance one, which focuses on the style, class and harmony of the boats and their crew. Each boat was thus inspected by a jury of specialists for the restoration competition, chaired this year by the famous British sailor Sir Robin Knox-Johnston. And the Fife-design Bermudan yawl Mariella (1938) of Carlo Falcone won the Monaco Classic Week Trophy 2021. Iran in the vintage motorboats, Blue Bird 1938 in the motor-yachts and the gaff cutter Olympian (Gardner 1913) were also awarded with the restoration prize. As for the elegance prize, it was won by Iran, the motor yacht Istros (1954) and the sailboat Viola (Fife 1908). 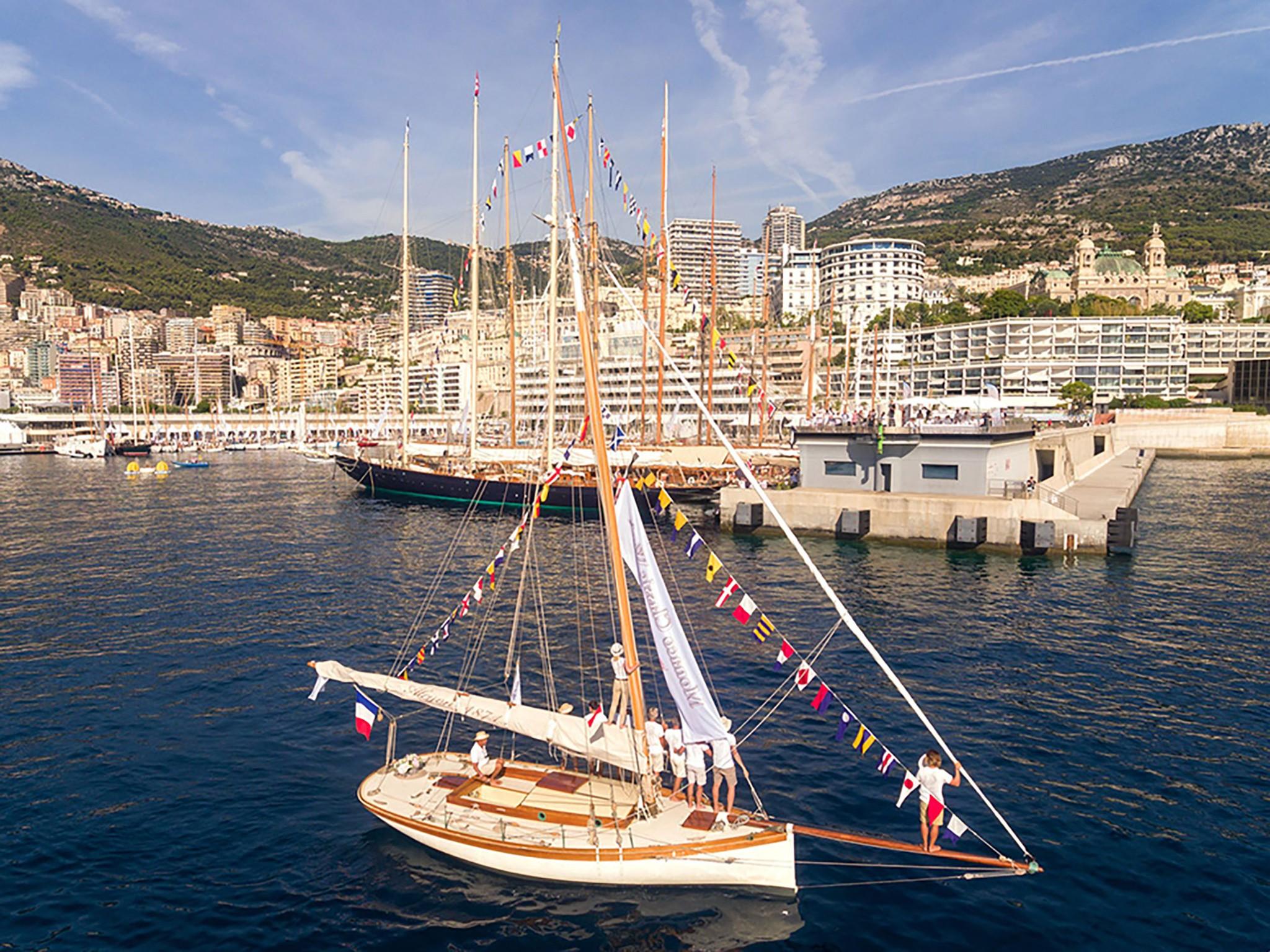 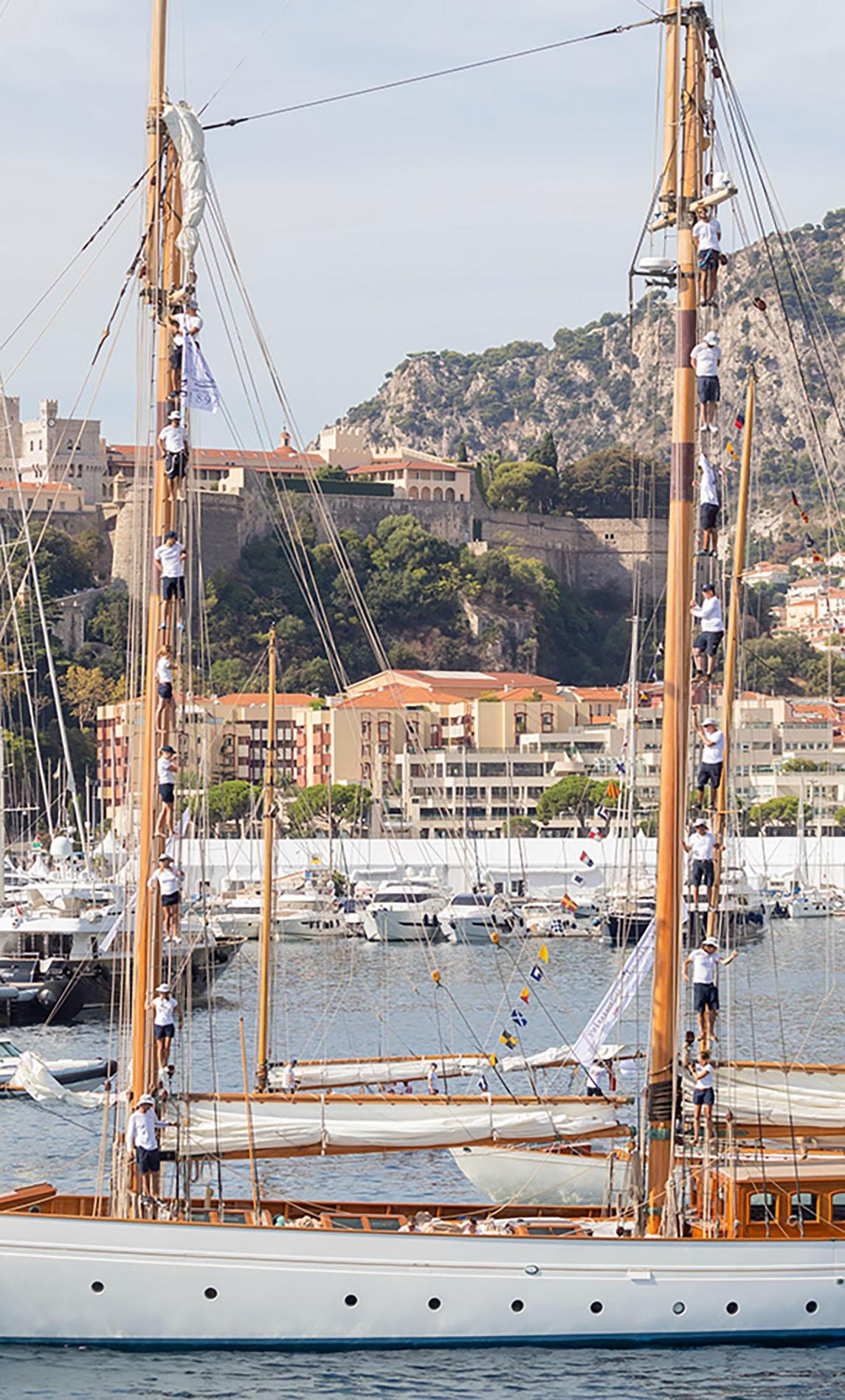 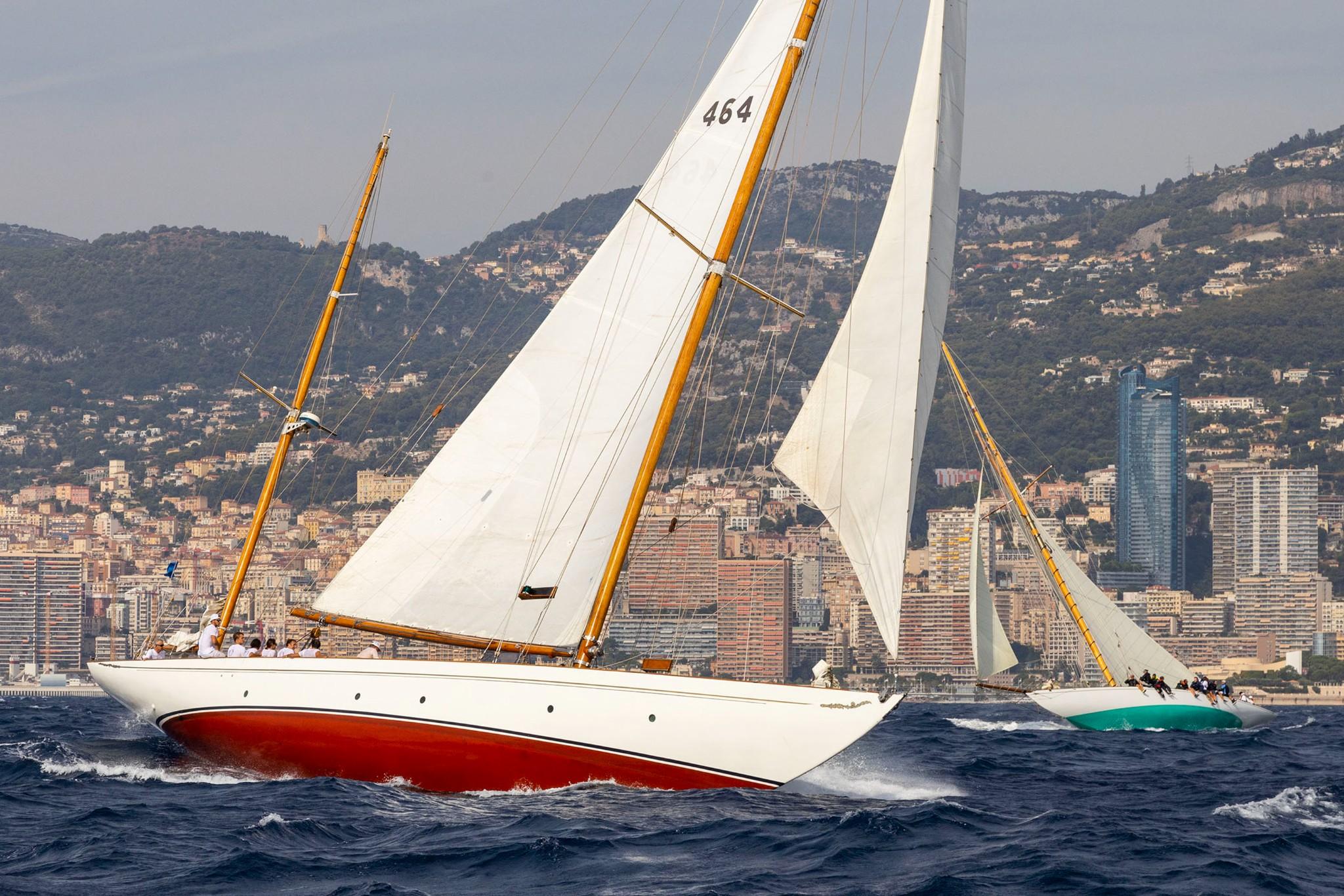 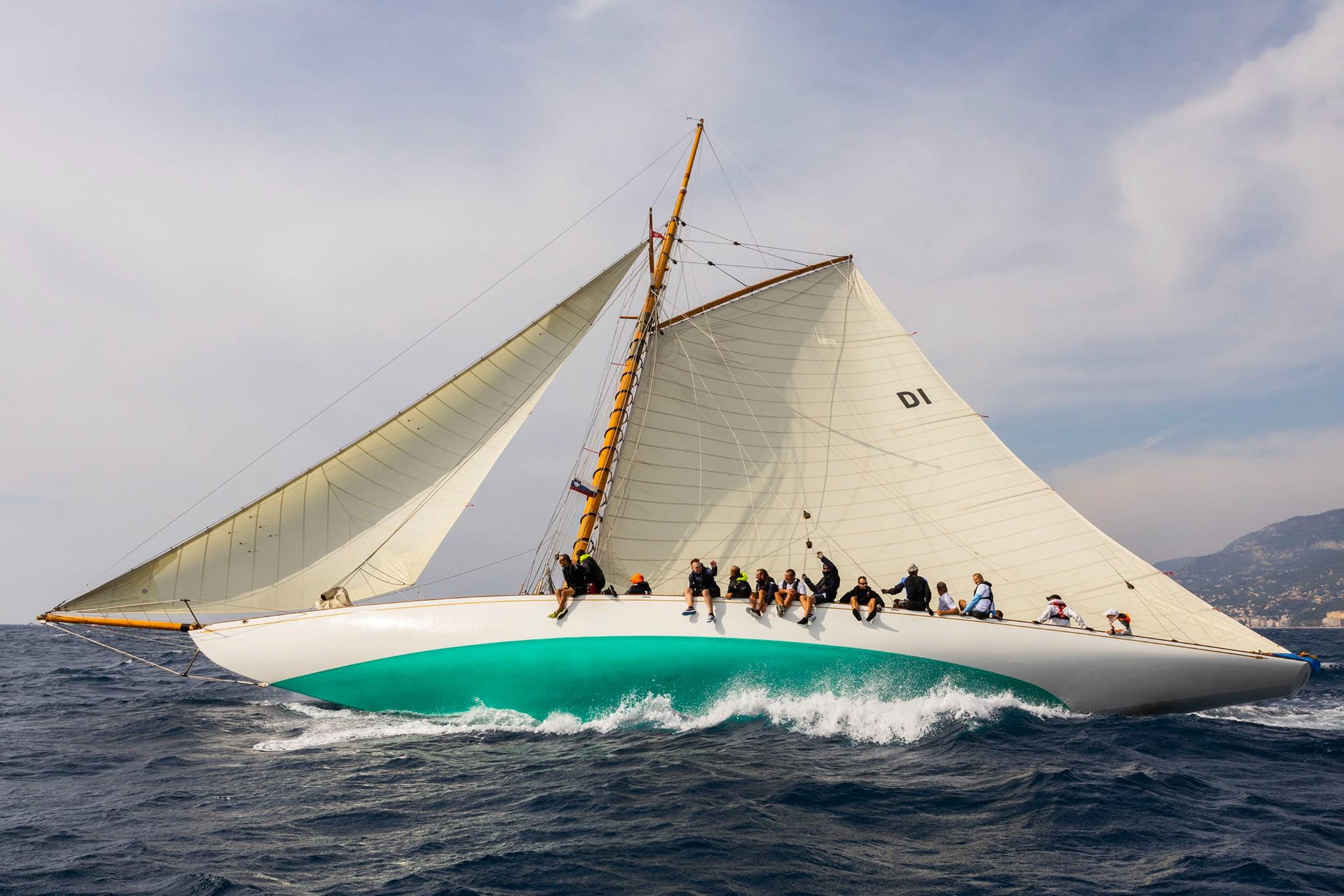 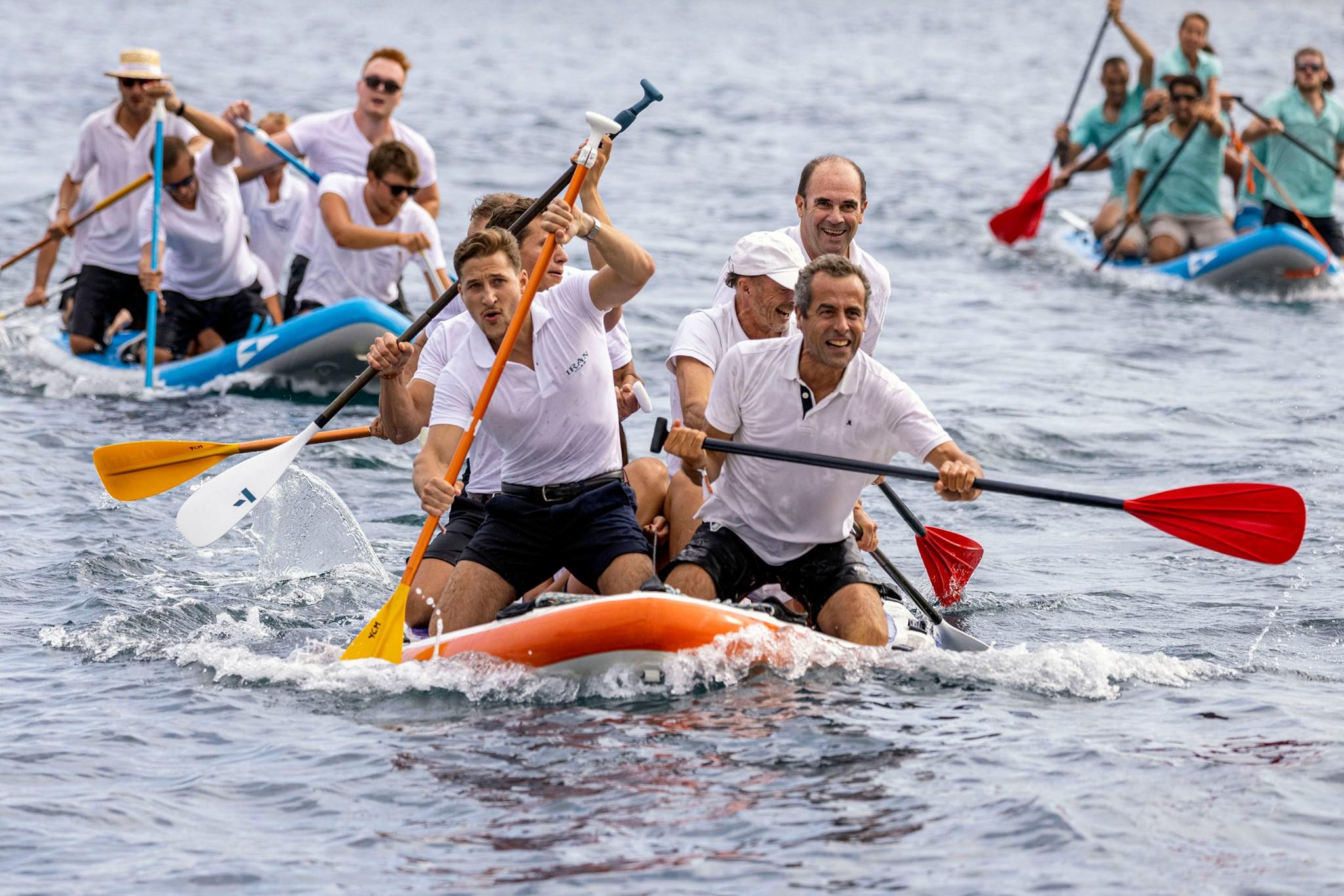 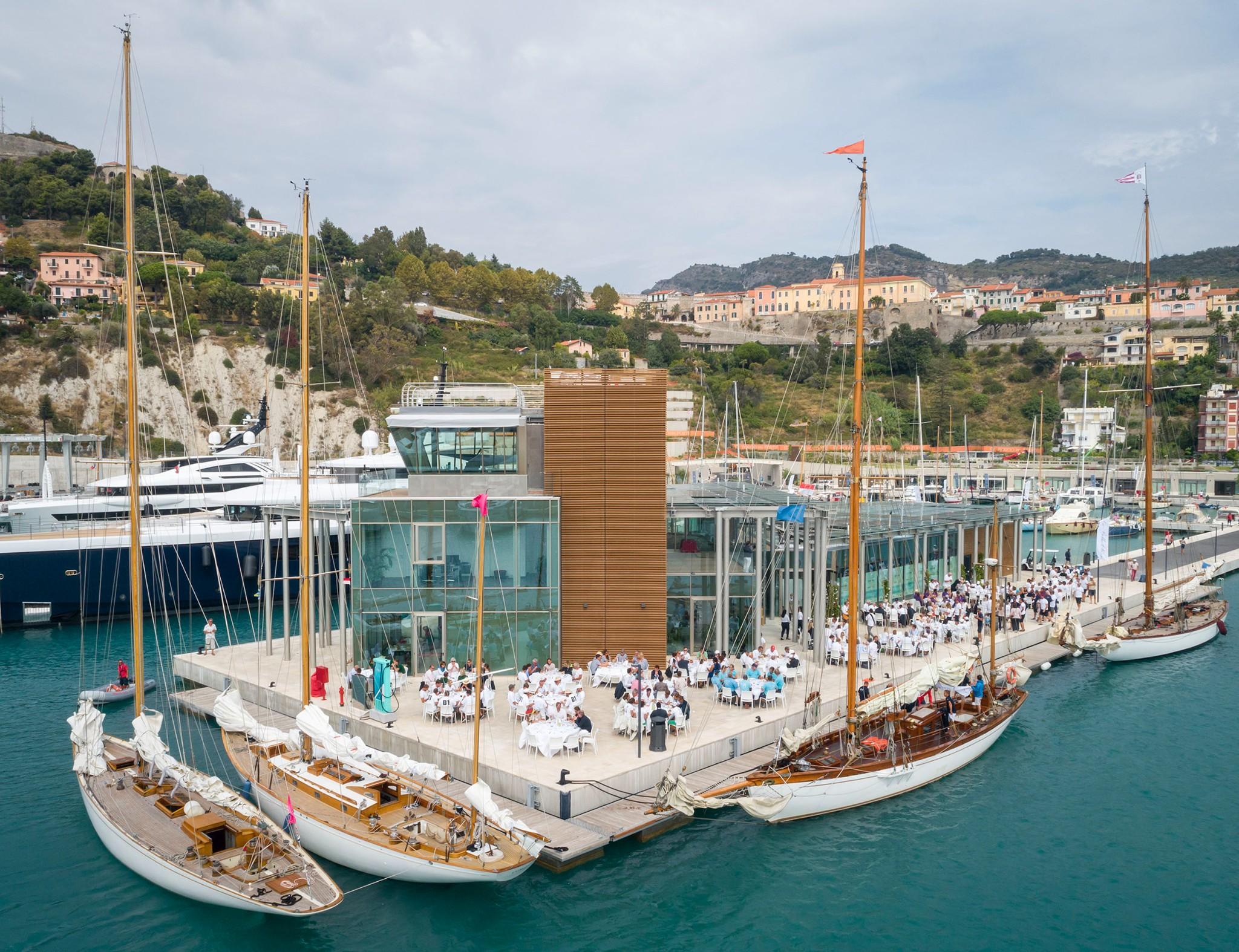 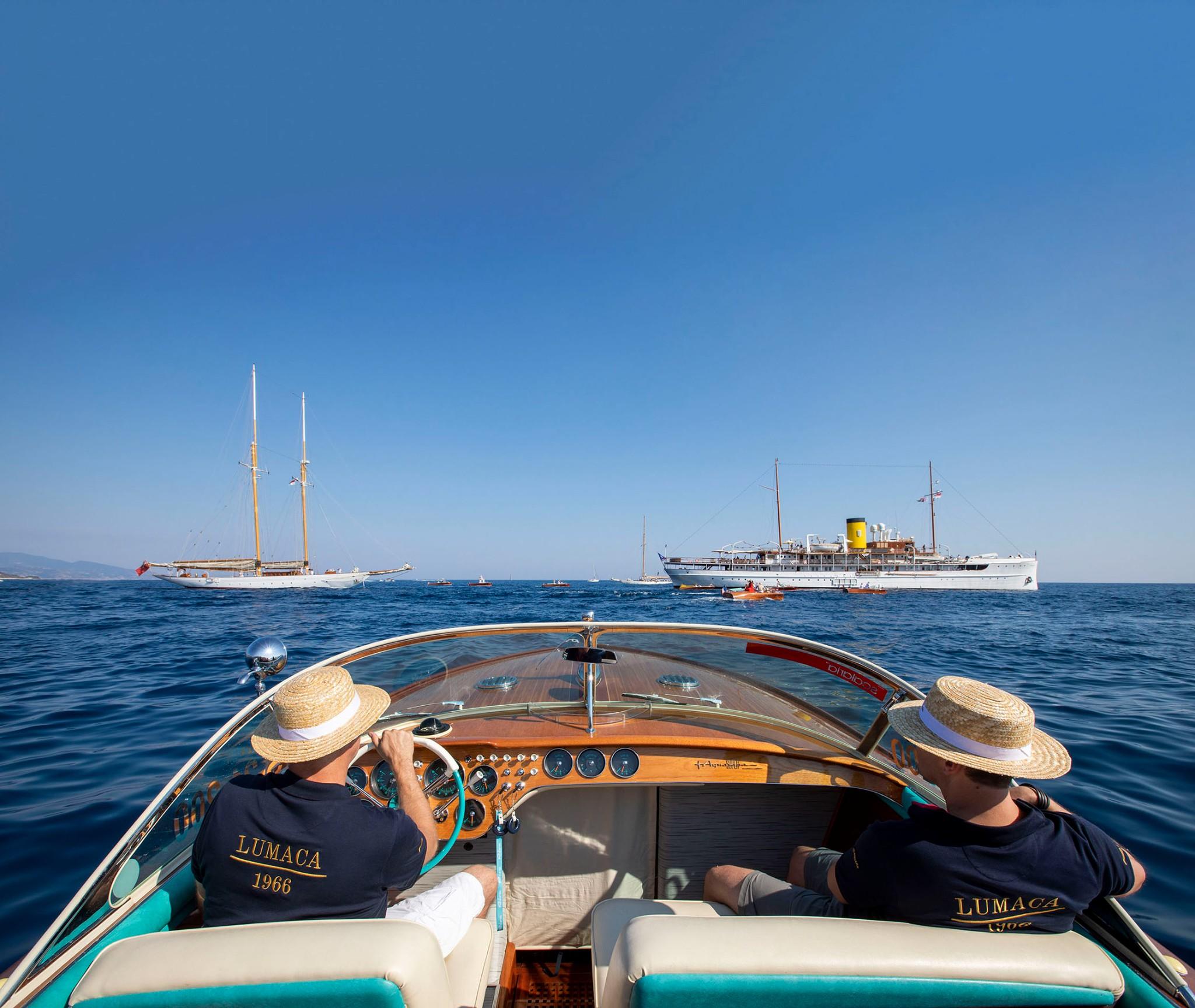