The Gunboat 68, with three units produced and two under construction, reflects a philosophy apart in the world of high-end cruising catamarans. If her sailing performance leaves competition far behind, the layout, comfort and construction open wide the way to circumnavigation.

For once, we were almost glad that Aeolus was absent and gave way to a light breeze. Off La Grande Motte, where its shipyard is located, the Gunboat, the third unit of this series presented in 2017, was able to demonstrate her ability to take advantage of the slightest breath of wind to glide over the waves, a rare but sought-after aptitude: on a sailboat, isn’t the best moment the one when the engine is turned off to be lulled by the melody of the waves and wind? And this atypical catamaran, in this new version initiated by an owner with a passion for regattas and performance – he also competes in the highly competitive GC32 circuit, a racing foiling catamaran – has been optimized in this direction with a 4 m higher rotating mast, a lengthened central spar to expand the surface area of the forward sails and deeper daggerboards increasing the draught to 4.50 m. From the manoeuvring cockpit, located at the foot of the mast, forward of the superstructure, the North Sails 3Di sails are hoisted using the four Harken 990 winches, the fastest of which “eats up” the halyard and sheet at high speed – 3 m/s! – and the sailboat takes off immediately. With a wind between 6 and 8.5 knots, the speed, under the mainsail and A3 (furling gennaker), varies between 6.5 and 9 knots.

The well-thought-out ergonomics of the cockpit

During the various sail changes, the cockpit demonstrates its ergonomics, for a small crew, and its technicality with jammers from the competition sector, its mast rotation adjustments, the load monitoring of the shrouds, the thin halyards with automatic hook system… The decision to place all these elements forward on the boat meets several criteria: to separate the spaces between the passengers and the sailors (manoeuvring is carried out without danger for the guests who enjoyed a certain intimacy), the best visibility on the entire sail plan for the adjustments, the closeness with the helmsman settled inside at the navigation and helm station. An option makes it possible to fit two bucket seats with a tiller at the stern for a steering experience worthy of ocean racing multis. The interior navigation station is also a model with its central steering wheel, its controls for the rotating mast, the sheet and the mainsail traveler, its large control screens, its throttles accessible near a door, visibility over the entire boat – complemented by cameras mounted under the trampoline and in the mast both forward and aft.

A few tacks closer to the wind, under J2 and then under J1, showed the potential of the Gunboat 68 when the wind gets somewhat more pronounced around 15 knots of wind, the two hulls split the waves at 13-14 knots at 45° to the apparent wind, with a slightly more intense heel than on a more conventional cruising catamaran. The return to port offered us the opportunity to test the engines, two 80 hp Yanmar giving her a cruising speed of 9 knots. The retractable bow thruster facilitates the approach to the pontoon: an alarm is triggered beyond 3 knots if it is in the low position.

Between a cruising cat and a racing multihull

Once moored, an overview of the deck is necessary to appreciate the details making a difference. Two beautiful stairs in the skirts lead to the water and in the lower locker, we appreciated the rudder lifting system to reduce the draft to 1.20 m and access to anchorages close to the shore. The two aft winches are used to adjust the mainsail track, but can also take over the spinnaker sheets. The circulation via the walkways is easy and one can note, in passing, the large and resistant solar panels on the deckhouse. Forward of the mast are located two lockers, the one on portside for storage and the starboard one for the hydraulic plant. Similarly, the bunkers in the forepeaks have different purposes: the bow thruster occupies the port one and the sails are stowed on starboard. The world of navigation, especially on a sailing boat, is full of paradoxes. The most famous one is that of calling “pleasure” the “slowest, most uncomfortable and most expensive” way to get from one point to another (according to our British friends). With the Gunboat 68, some of these paradoxes were challenged – the boat is fast and comfortable – but new ones immediately appeared. For a start, at first glance, she has confusing lines. Inverted bows, discreet deckhouse, and massive sails: this catamaran has all the attributes of the most recent racing machines and yet, she is definitely a cruising boat – admittedly a fast and intended for deep sea one – but a cruising one all the same. Then, its construction uses the most sophisticated materials, coming from ocean racing or even aeronautics (infused carbon fabric, honeycomb structure, titanium…), therefore not necessarily the most sustainable and recyclable, but the Gunboat 68’s philosophy is also based on a quest to preserve the environment in the long run: because the boat is fast, even in light winds, the engine can be shut down from 5, 6 knots of wind when other sailboats still rely on this polluting propulsion. Likewise, the solar panels and the hydrogenerator, which has no real impact on the boat’s speed, are sufficient to supply the on board energy and compensate for the lack of a conventional generator.

High-quality but not ostentatious finishes

The comfort of passengers is not affected by the great performance of the Gunboat 68 because let’s not forget that this catamaran is designed to take her owner and crew around the world. The aft cockpit offers a good protection against sun, wind and sea spray and a nice convivial space with three settees or a sofa and its table. Access to the saloon is through a large glazed door and the central helm station is immediately noticeable. On starboard, the saloon with a table for meals enjoys a beautiful panoramic view, as does the galley on portside. It features a central piece of furniture for storage that can be used as a work surface or countertop. The whole is well arranged and functional. The master cabin occupies a large part of the starboard hull with a desk area, a large transverse double bed with a sea view thanks a long porthole, closets and storage and a beautiful bathroom with sink and shower cabin at the bow. The aft part of this hull houses a guest cabin with private shower room. Based on the same principle, two guest cabins occupy most of the port hull, but if they each have their own bathroom, they share the central shower with double entrance. The bow accommodates the crew quarter: two bunk beds and a toilet. High-quality finishing, without being ostentatious, marine amenities, the use of mastered technologies from high-tech sectors and great sailing performance: an incredible alchemy that results in the Gunboat 68.

Gunboat : A shipyard in search of excellence

Sporting a very distinct identity from the beginning, Gunboat had a difficult start. Famous across the Atlantic where the concept was born in 2002, the first boats suffered from a lack of quality and an imprecise construction, be it in the United States or when it was outsourced to China and South Africa. The acquisition by Grand Large Yachting Group, which owns the brands Allures (aluminum dinghies), Outremer (ocean cruising catamarans), Garcia (ocean cruising yachts), Alumarine (professional vessels) and Océan Voyager (day-charter catamarans), has enabled Gunboat to make a qualitative leap symbolized by the 68. The design office works with the best in the world of shipbuilding by involving in its projects VPLP, Michel Desjoyeaux’s studio Mer Agitée, the designers Christophe Chedal Anglay, Patrick Le Quément and the best suppliers, such as Lorimar, Cariboni, North Sails. Quality research starts at the design stage with a 3D modeling of all elements, well-defined operating procedures for each workstation, numerous controls at each stage and constant communication between engineers and operators. Closeness to Outremer also makes it possible to pool some resources or services. This reassures and satisfies the most demanding customers. 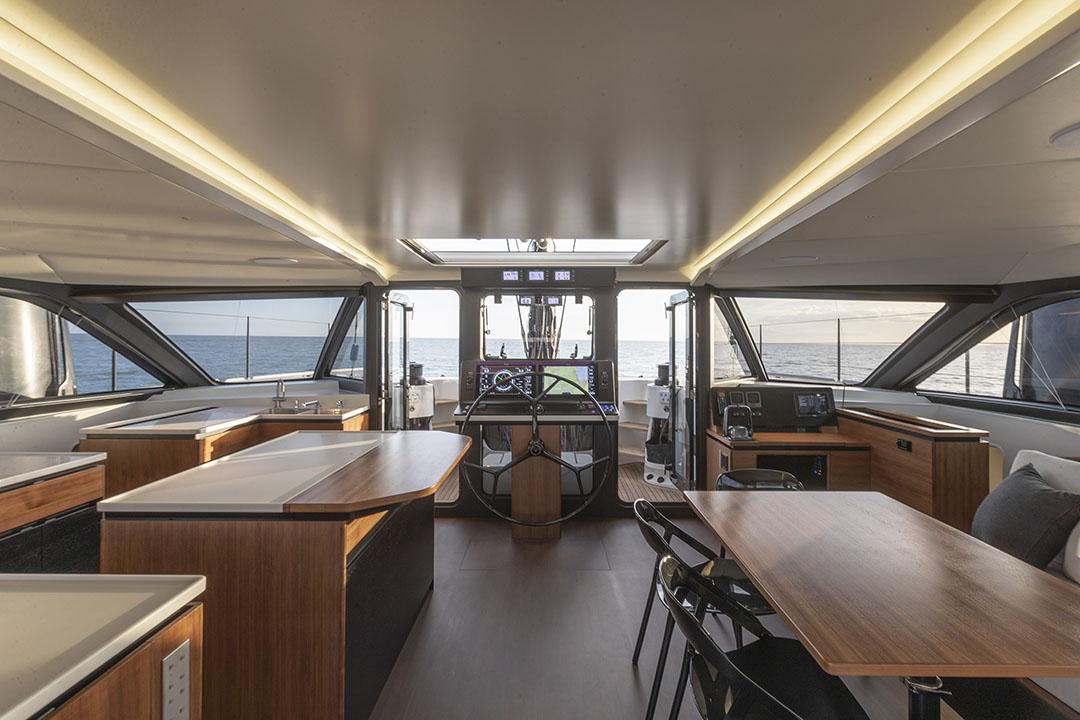 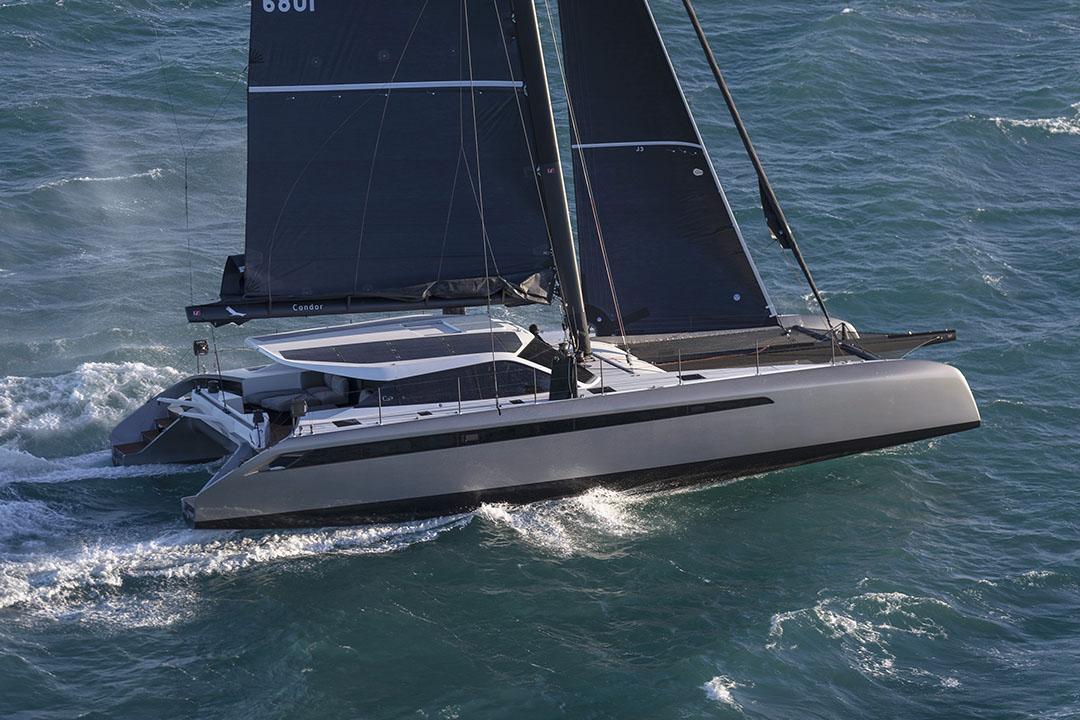 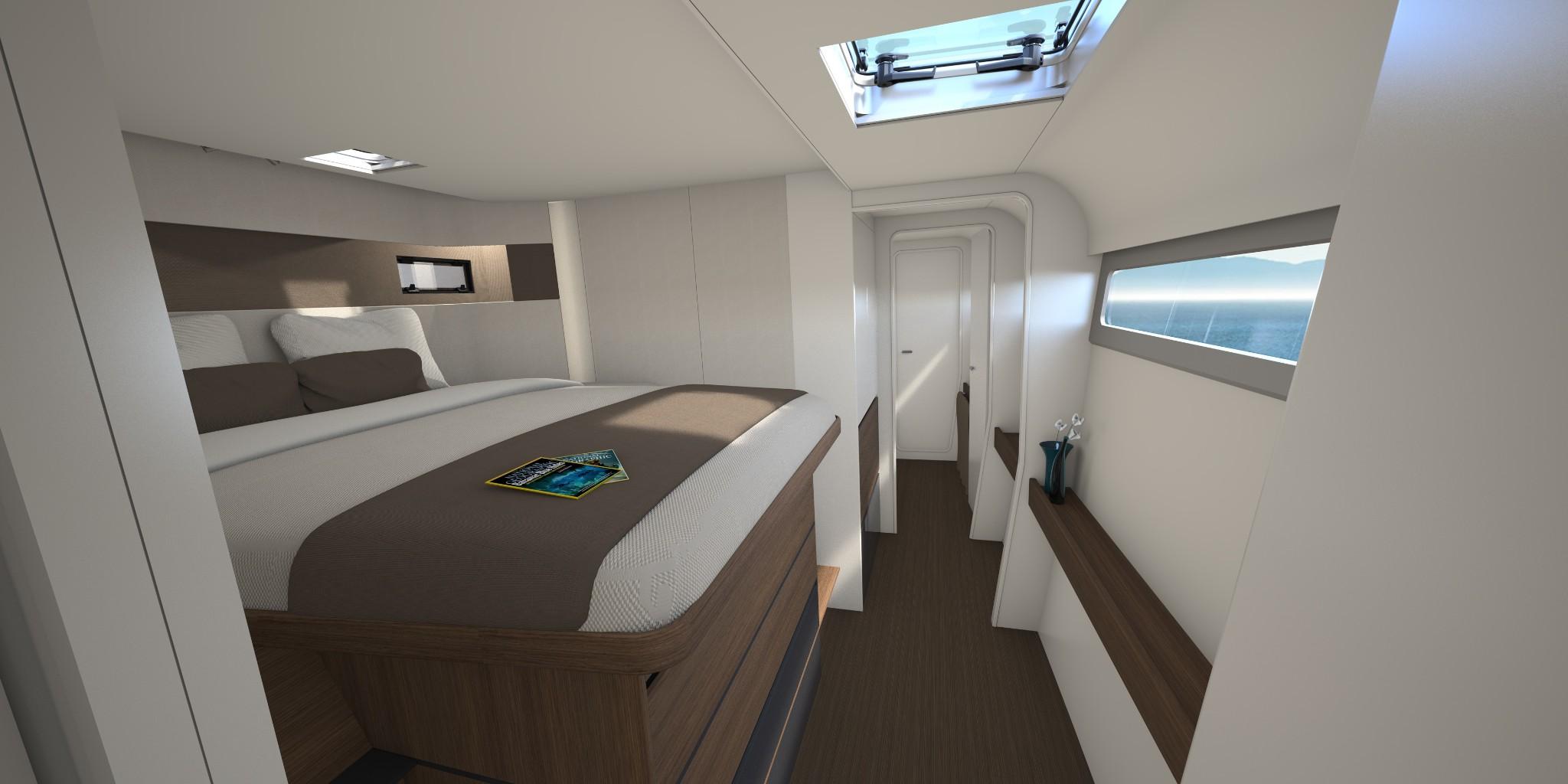 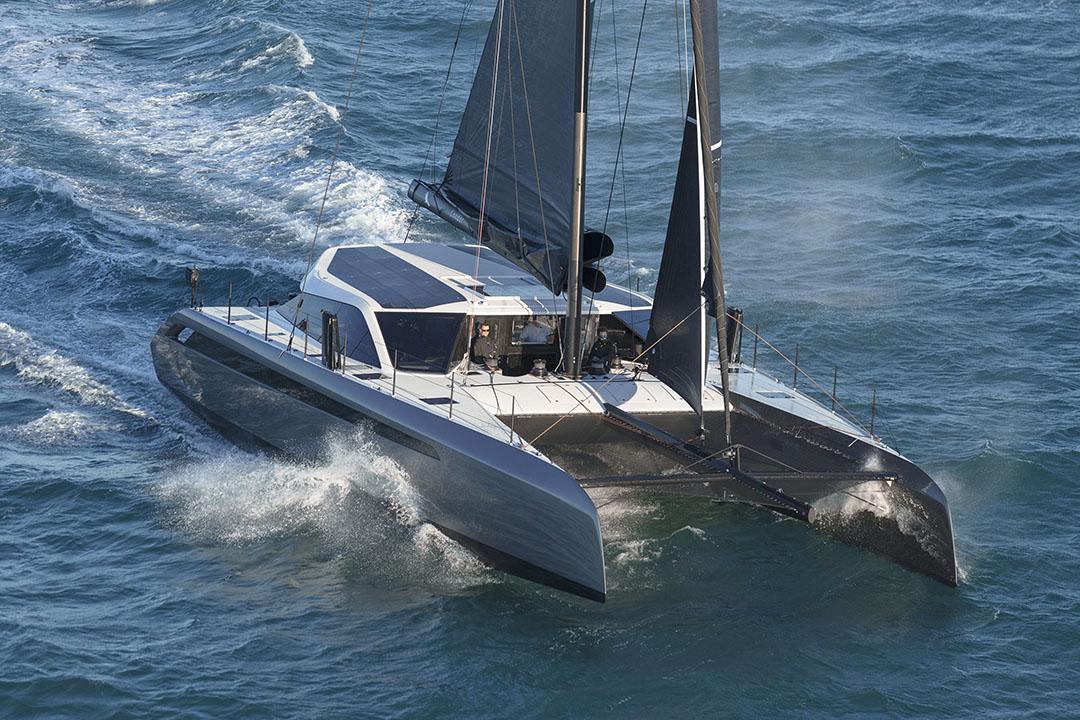 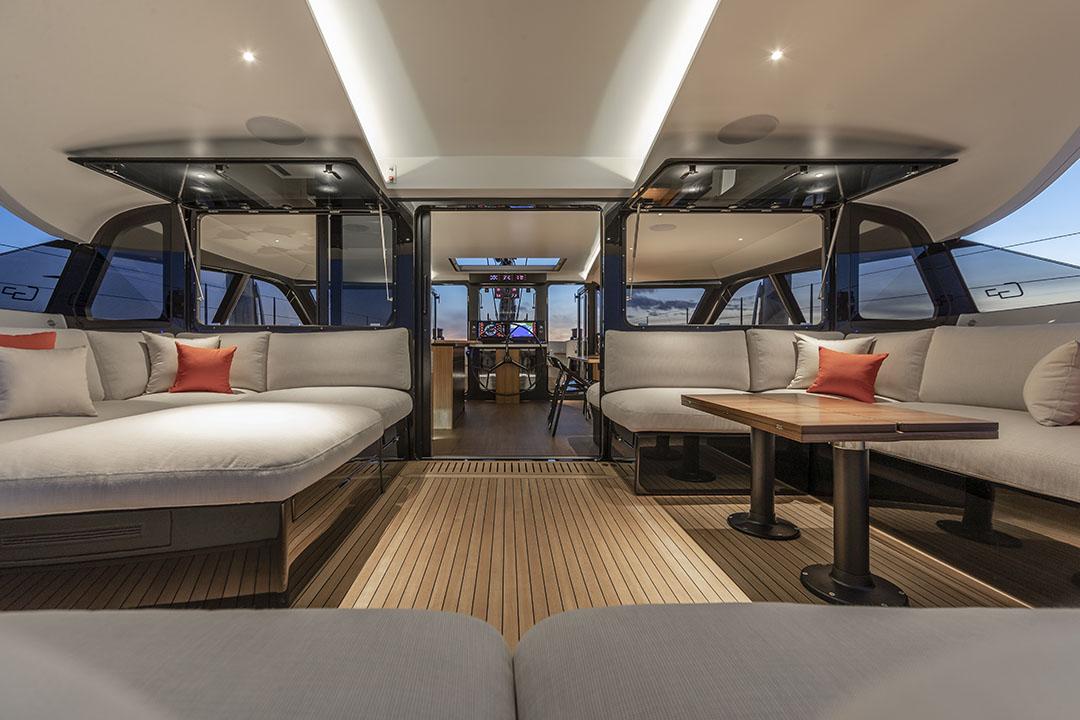 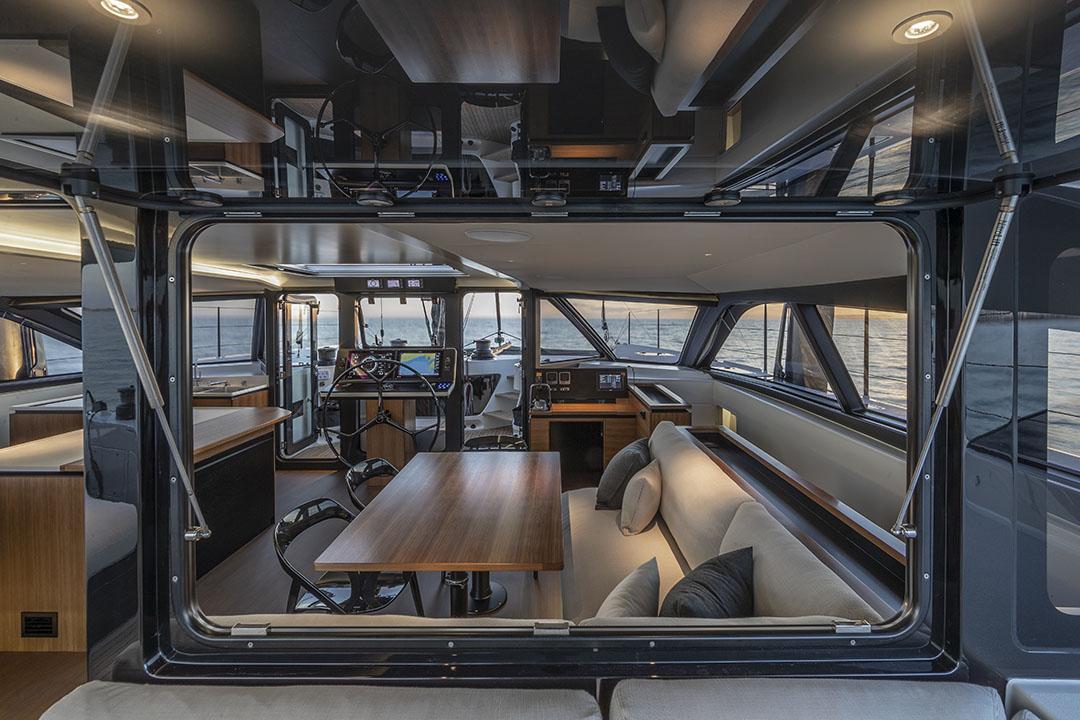 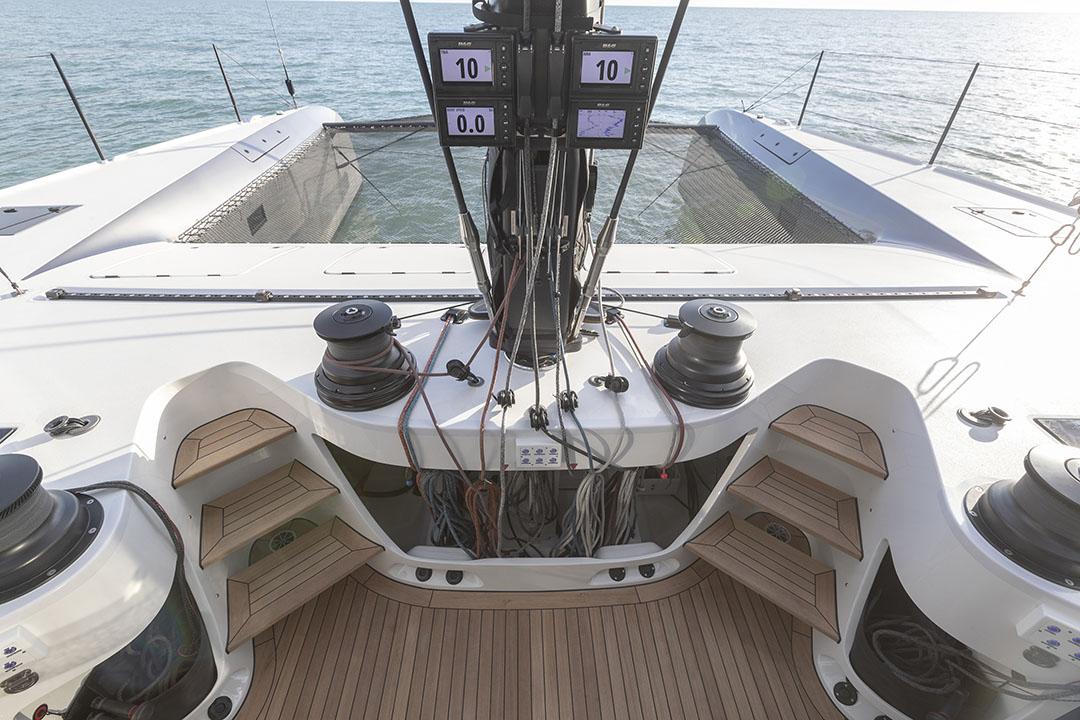 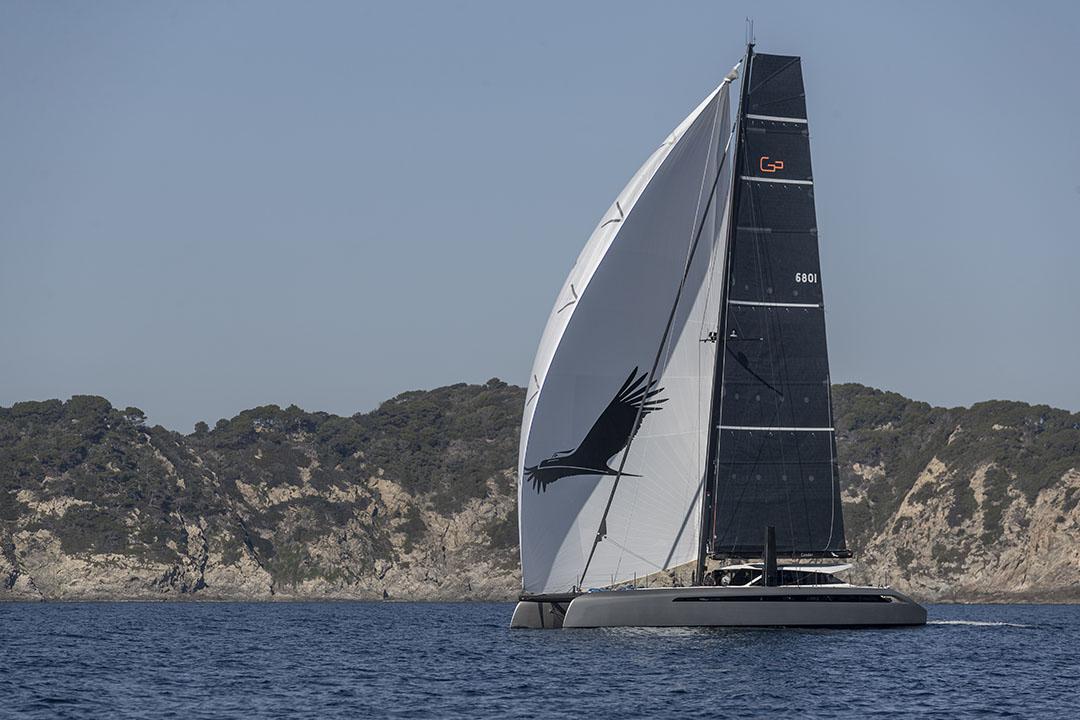 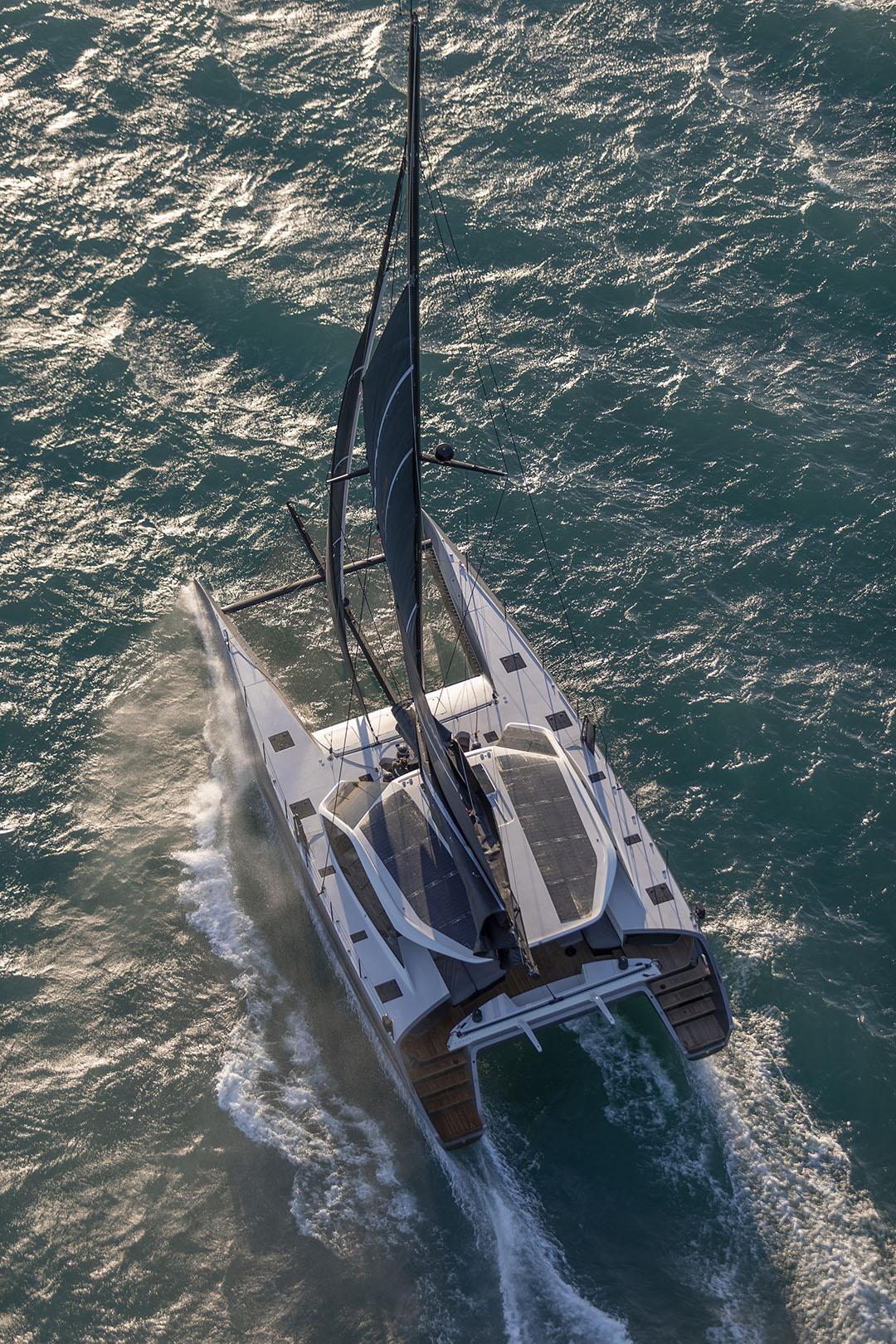