Like a metronome, Ferretti Yachts renews and completes its flybridge range. In 2017, it launched two new units : the 780 and the 920. The latter clocks up the miles, at up to 30 knots, at the best. Be it in her four or five cabin versions, she offers an equally praiseworthy comfort.

If there is one brand that could be a reference in terms of flybridge from 15 to 30 metres, it is Ferretti Yachts, whose range counts eight models (450, 550, 650, 700, 780, 850, 920 and 960). They all display an unmistakable consistency, be in terms of silhouette or interior layout. Perfectly symbolizing family cruising, their exterior design has evolved over time but remained true to the brand. According to the traditional expression, “their lines age well” thanks notably to their timeless forms. For those, Ferretti Yachts has been relying for over 25 years on Zuccon International Project, which has also penned the subtlety aggressive lines of this 920. Her hull designed by Ferretti Group Engineering studio breaks the surface of the sea, and shows that she is more than a match. Which urged us to proceed with our tests.

The pristine engine room of the first of the “series” is fitted with two MTU 16V2000 M96, developing each 2 435 hp. The more powerful version. Without looking for performance at all cost, it’s good to know that this yacht can reach 30 knots. While defining the performance curve from the minimal planing speed (12.9 knots at 1 200 rpm) and every 200 rpm, we were actually pleased to note her decent performances between 800 et 2 200 rpm. At the economic cruising speed of 15 knots (1 500 rpm), her range is actually close to 450 miles. Note that the shipyard has chosen to fit this 920 with two stabilizer systems : Seakeeper gyroscopic ones and zero speed fins. Only for those who do not care about extra cost… But an owner or a captain with a preference for minimum “roughness” will opt for the efficient gyroscopic ones. For an increase piloting comfort, the 920 features a hydraulic steering system : after initiating a turn, if the helm is released, it will automatically go back to its previous course. Finally, we made her pass the sound meter test at the recommended cruising speed of 13.8 knots (2 000 pm). Our measures were, if not rewarding, at least average : 77 dbA in the salon, 66.8 dBA in the master, but a high 82.6 dBA in the VIP. The shipyard is aware of the improvements to be made regarding soundproofing and will undoubtedly carry them out on the upcoming units.

Needless to say, such a unit dedicated to cruising has to offer outdoors designed for idleness. And clearly, the shipyard has pampered the guests seeking recreation and relaxation. The transom swings open to provide a swim platform that can be submersed, allowing the 4 metre William jet tender to exit its garage. This platform then becomes a beach club just by installing there a teak floor. There, on each side, a staircase leads to the cockpit, rather simple in design but where lies a table for eight. Its asset : it is entirely protected by the flybridge, a place accessible via a flight of stairs on port side. No surprise for those familiar with the brand, there we discover a 70m2 pleasant and well-equipped surface : aft deckchairs (unless the owner opted for a Jacuzzi) and on starboard a lounge facing a massive bar-kitchen furniture (the owner’s call). The forward part of the sundeck, where is located a helm station with a double bench, is protected by a partly glazed carbon-fibre hard-top (an indispensable option for us). On its left, a staircase leads to the wheelhouse and its (relatively) design console with four navigation and control screens. Note that the helm is central. The captain will take place on the electrically adjustable chair and enjoys a 200-degree visibility. Let’s now head to the foredeck, where the deckhouse hosts three sunbeds. It ends with a dinette for four, with its two tables perfect for snacks. Diner will be served in the cockpit.

If the United States and Asia will get slightly different layouts, including a galley opening onto the living room, aboard this European version, the independence and discretion of this work place was preferred. It is thus located near the dining room for eight, an integral part of the open-plan space. There we also find the salon and its sofa (also for eight), where the guests will enjoy a nice view though large lateral glazed surfaces. Moving forward on the main deck, we discover the master and first its dressing room (a mini cabin that could benefit from more storage). Unsurprisingly full-beam, this suite enjoys abundant natural light thanks to its rectangular full-length portholes. Of course, sea view is also on the menu. The king size bed, placed rearwards, is facing a wall with the tv, behind which is located the bathroom with independent WC, an Italian shower and two onyx basins… all in a fine decorative finishing. The guests will be accommodated below decks, in one of two layouts available : either with three (a VIP, a double and a twin) or four cabins (two doubles and two twins). In both case, the crew enjoys, forward, a cabin for the captain, two cabins with two bunk beds in each, a dinette and two toilets, with an access located near the kitchen to avoid promiscuity with passengers. An additional asset for charter, to which the 920 can easily pretend, if even if her primary vocation is family cruising. In addition, this model will easily stand the test of time and will be popular on the second-hand market. An important point for some buyers for whom the two best moments are the acquisition and the sale. It’s common knowledge. 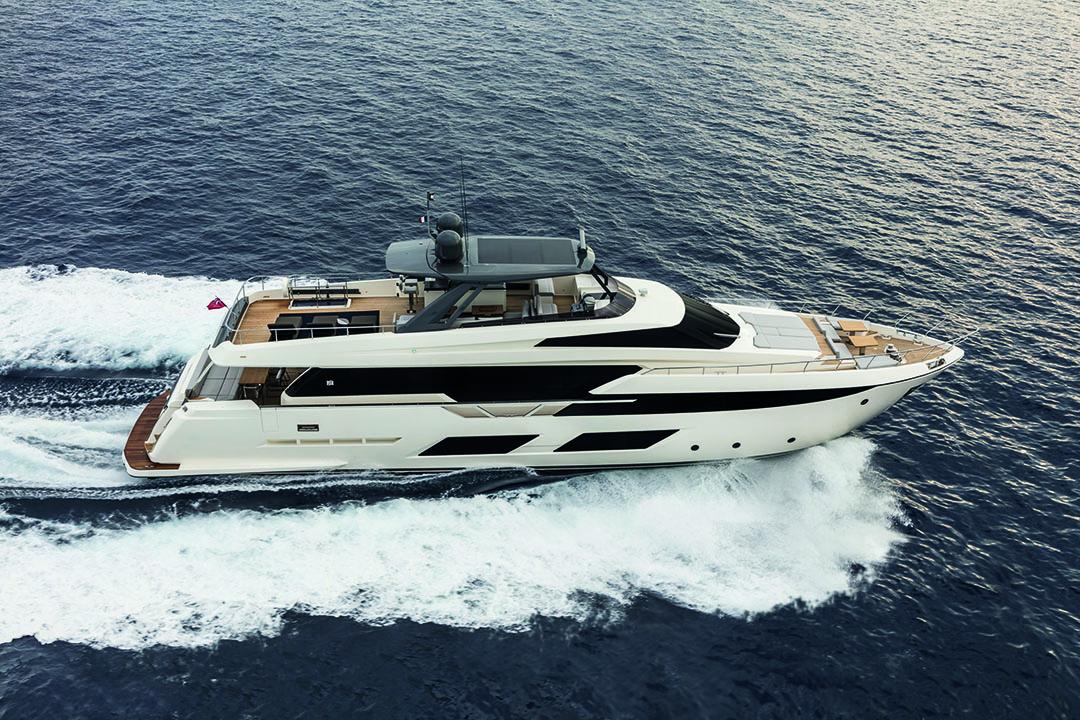 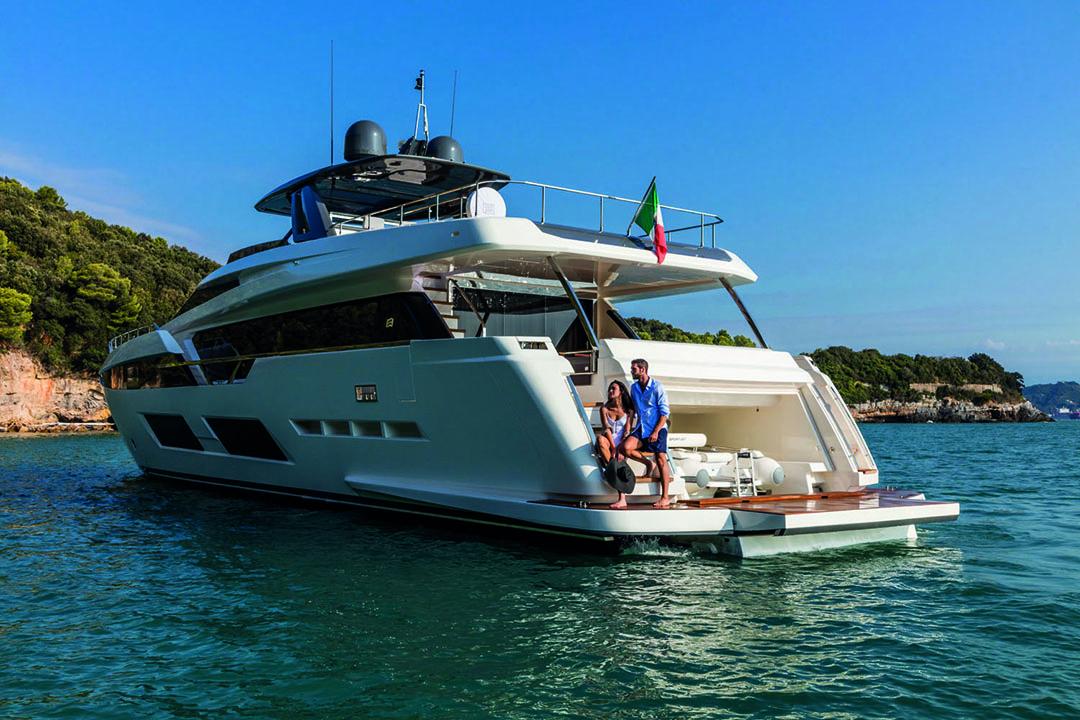 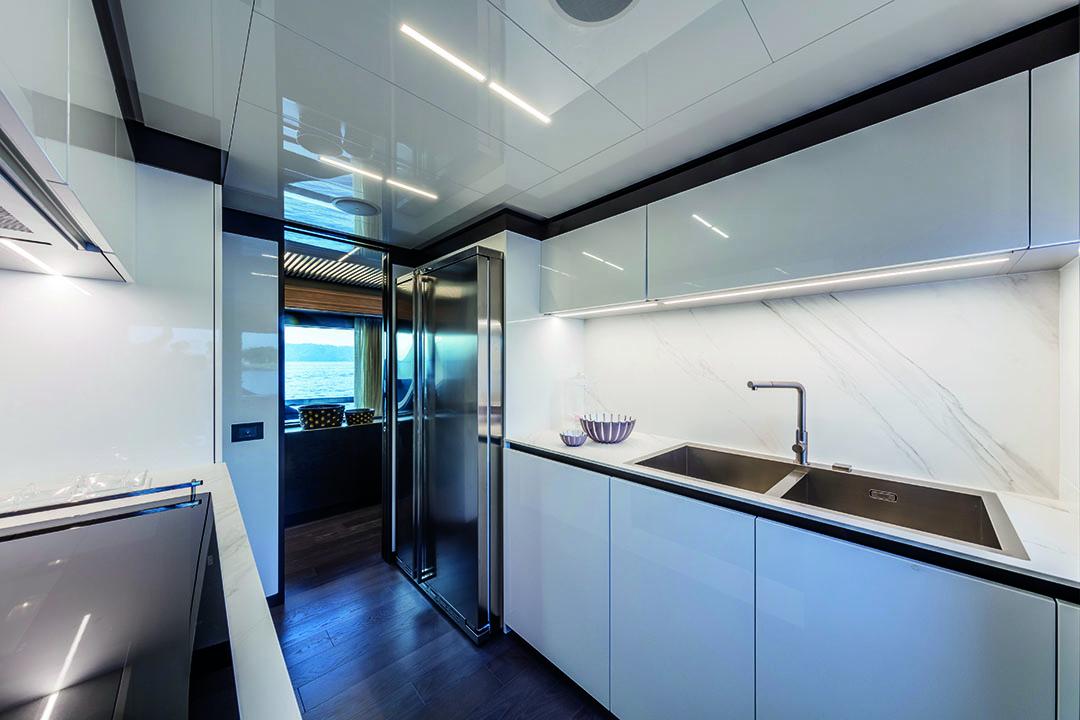 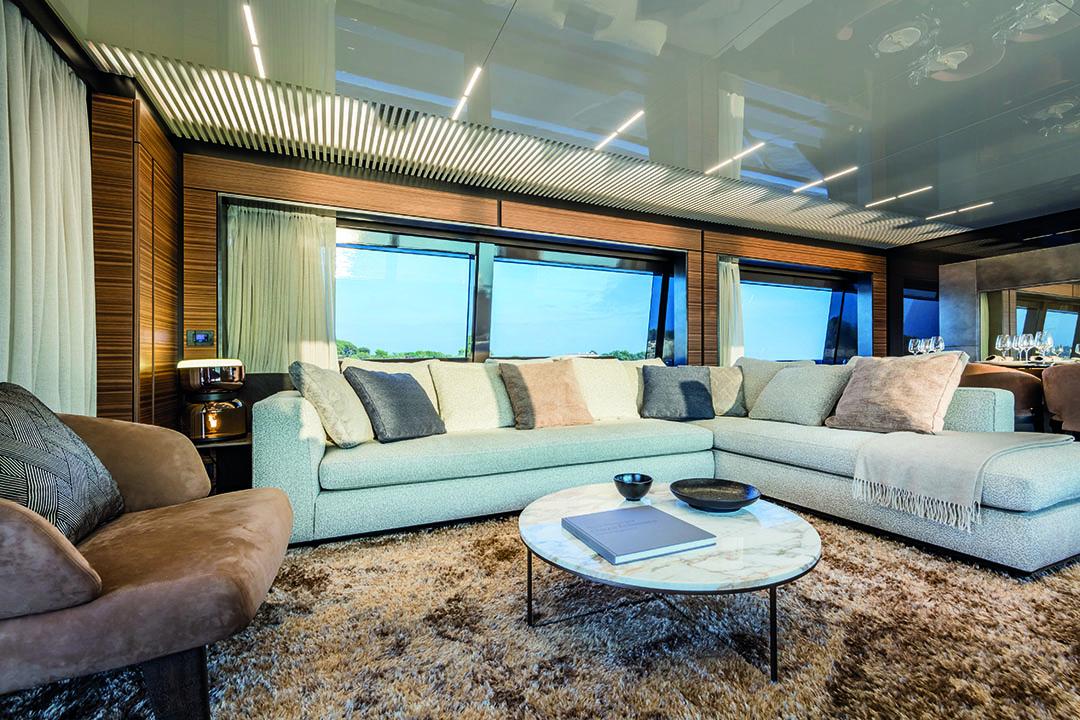 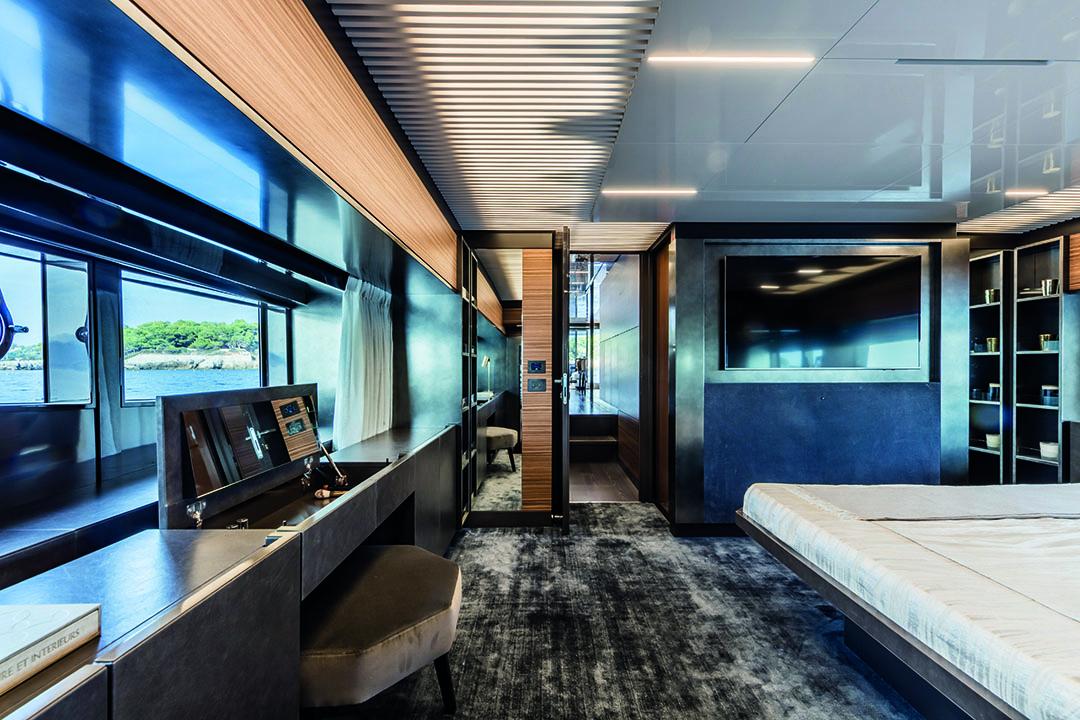 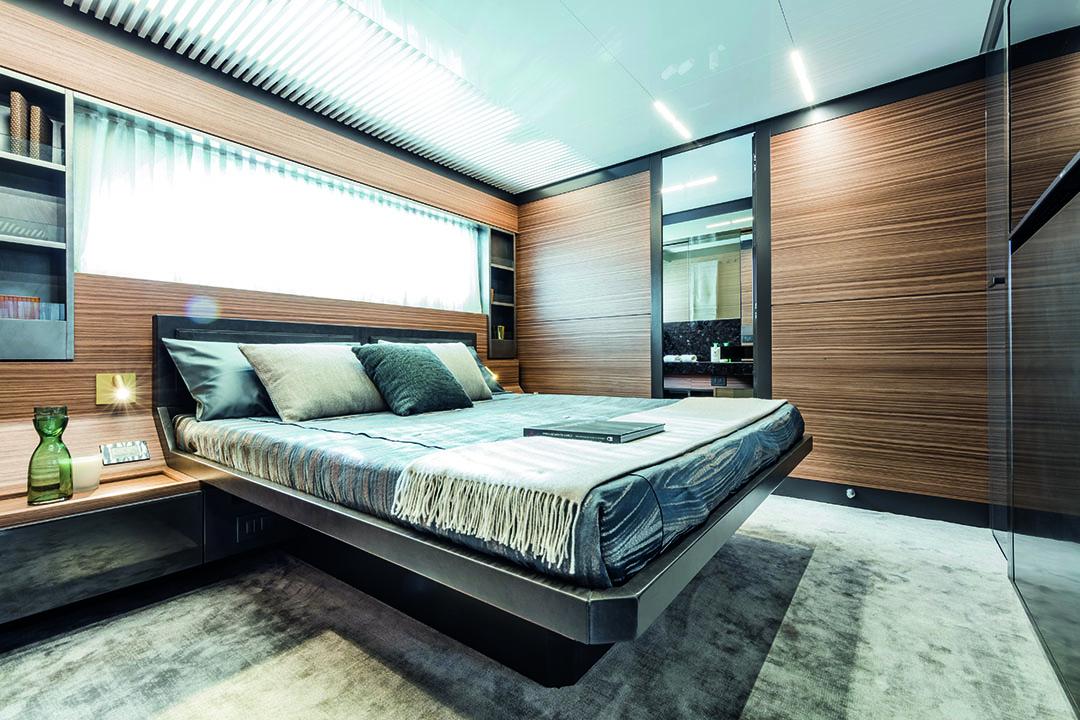 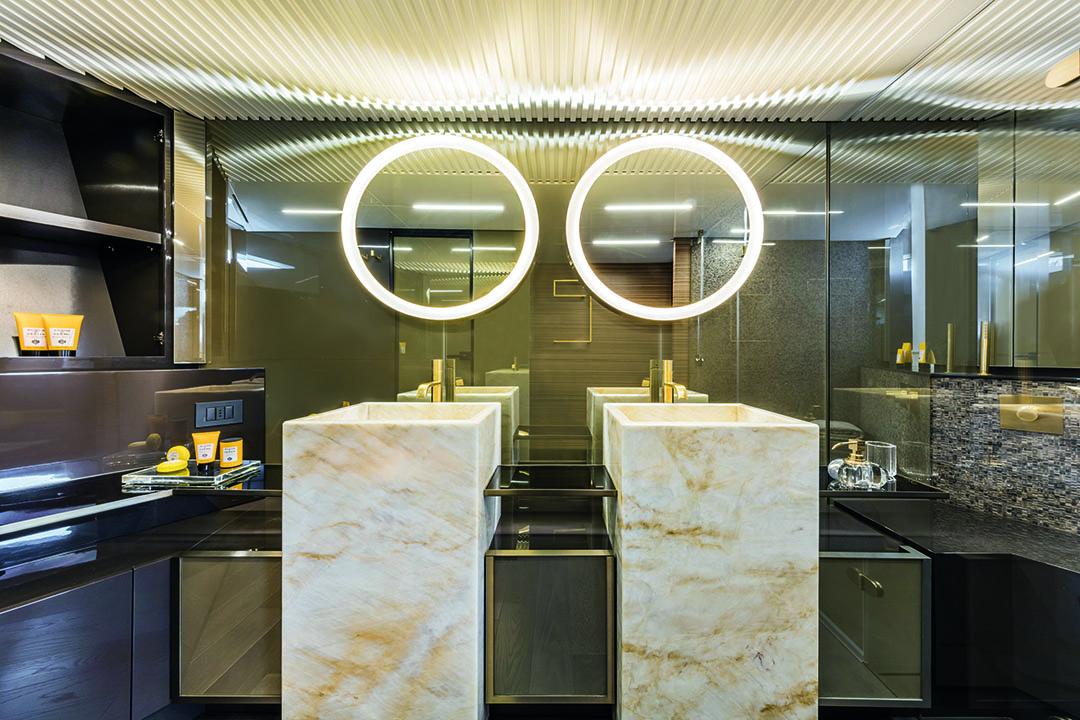 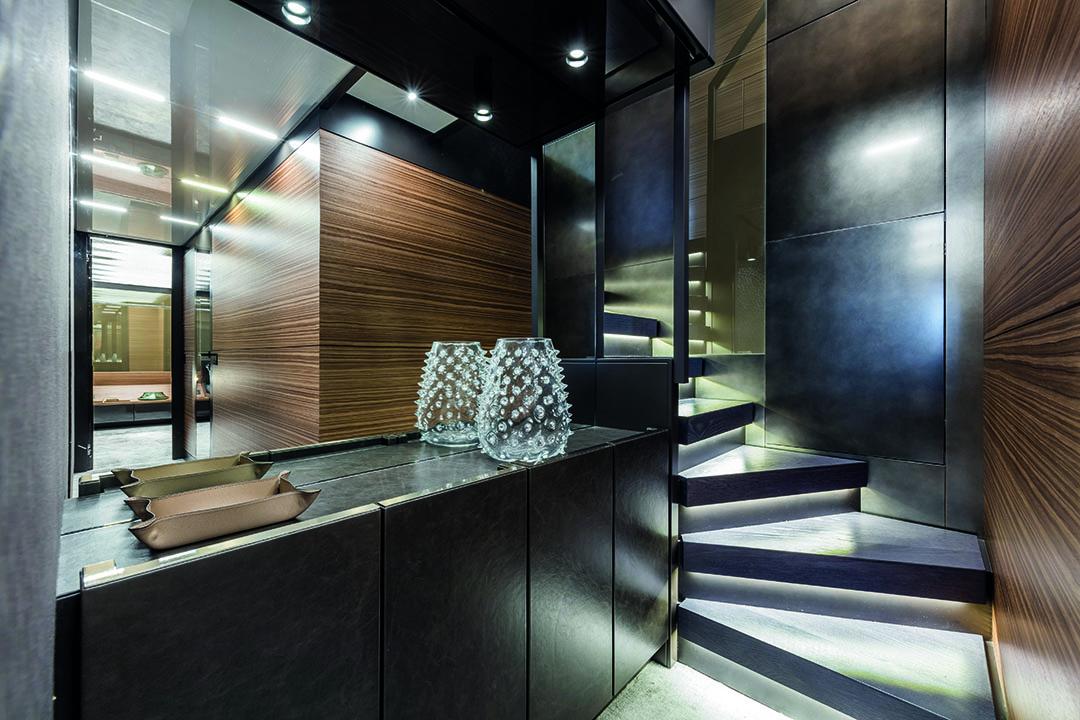 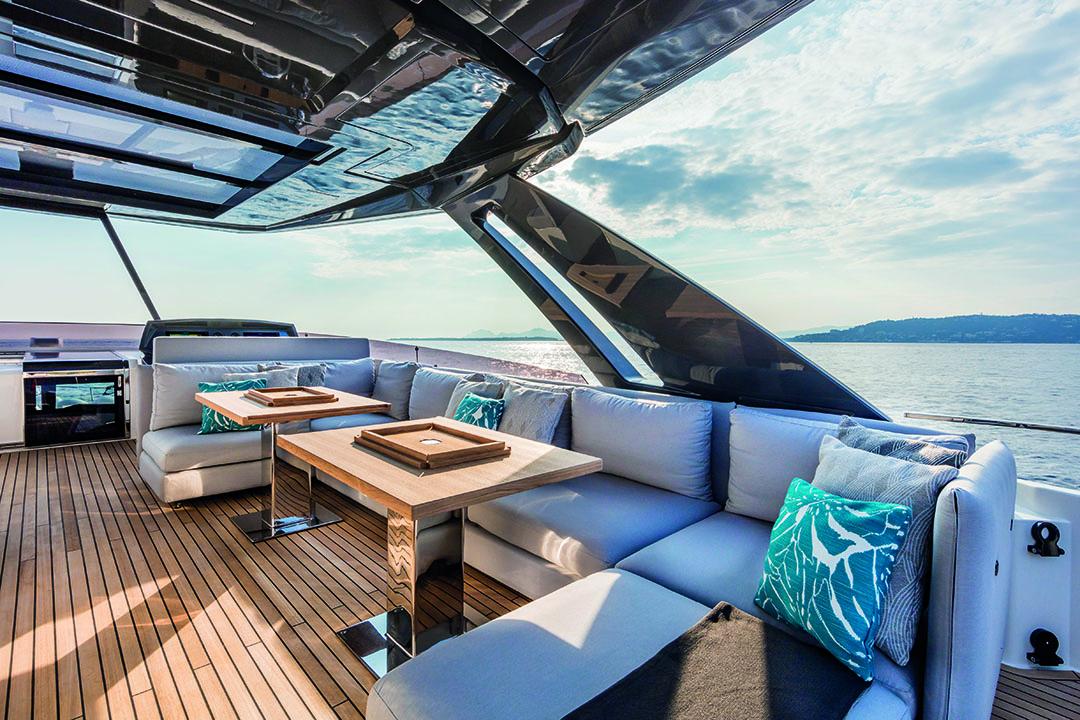 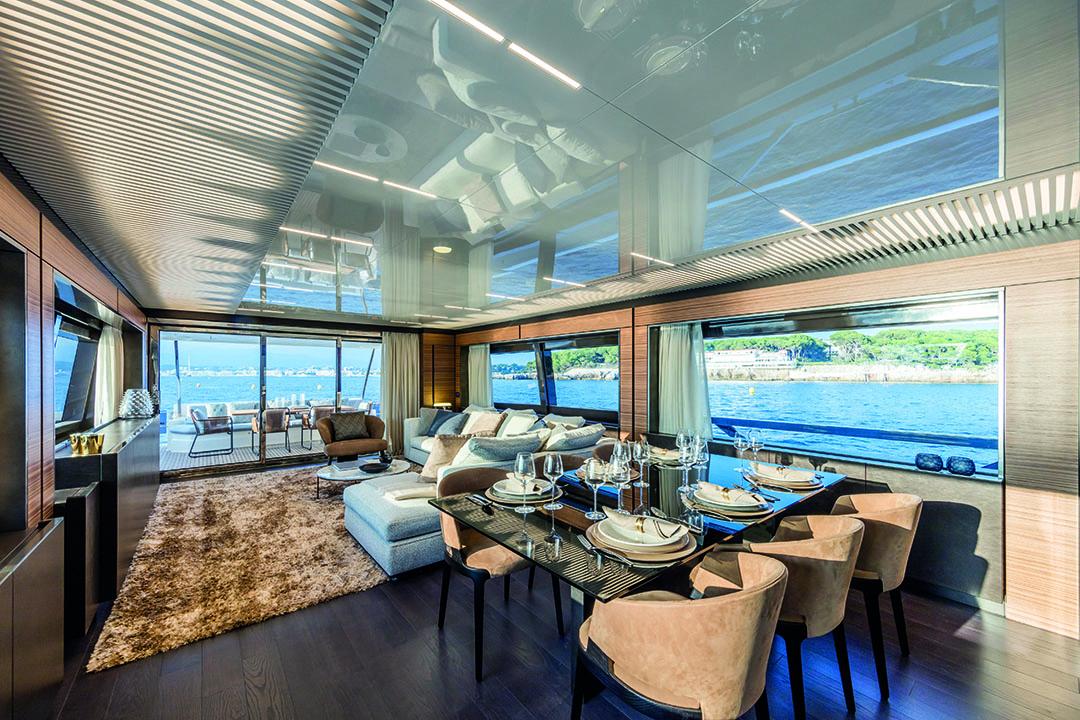 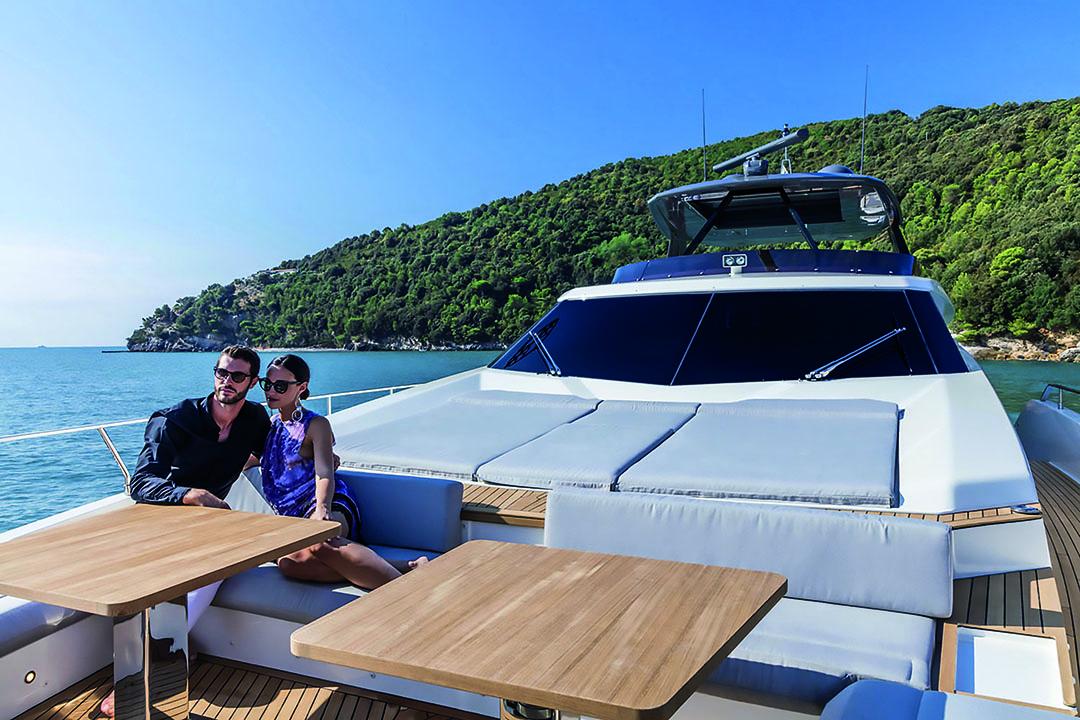 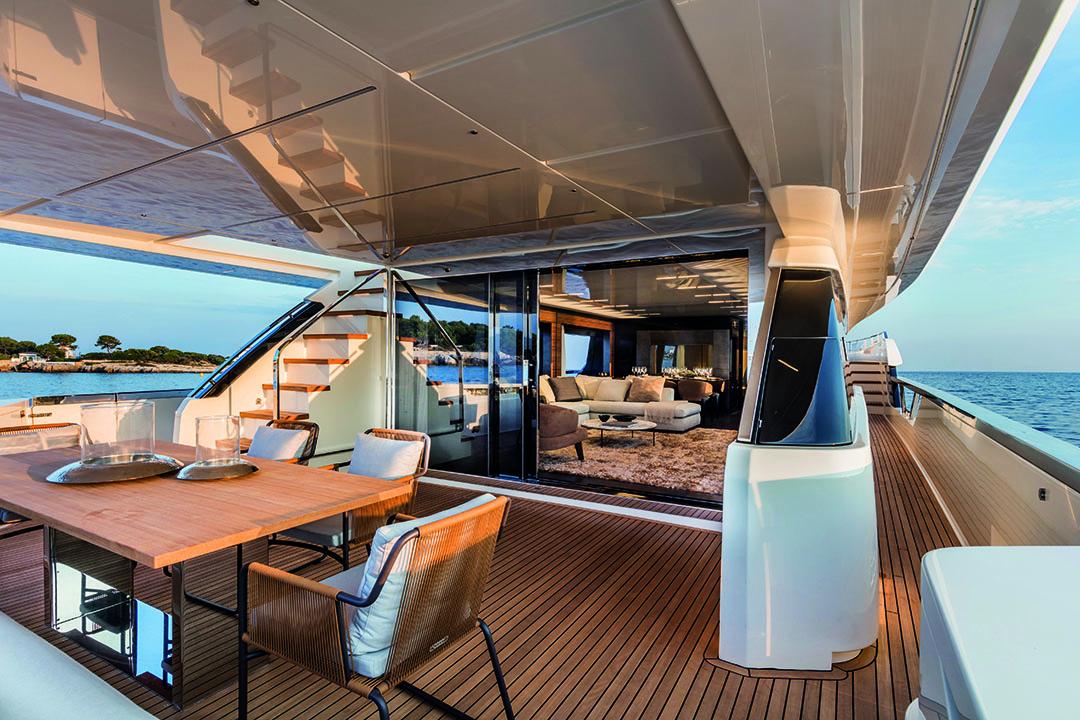 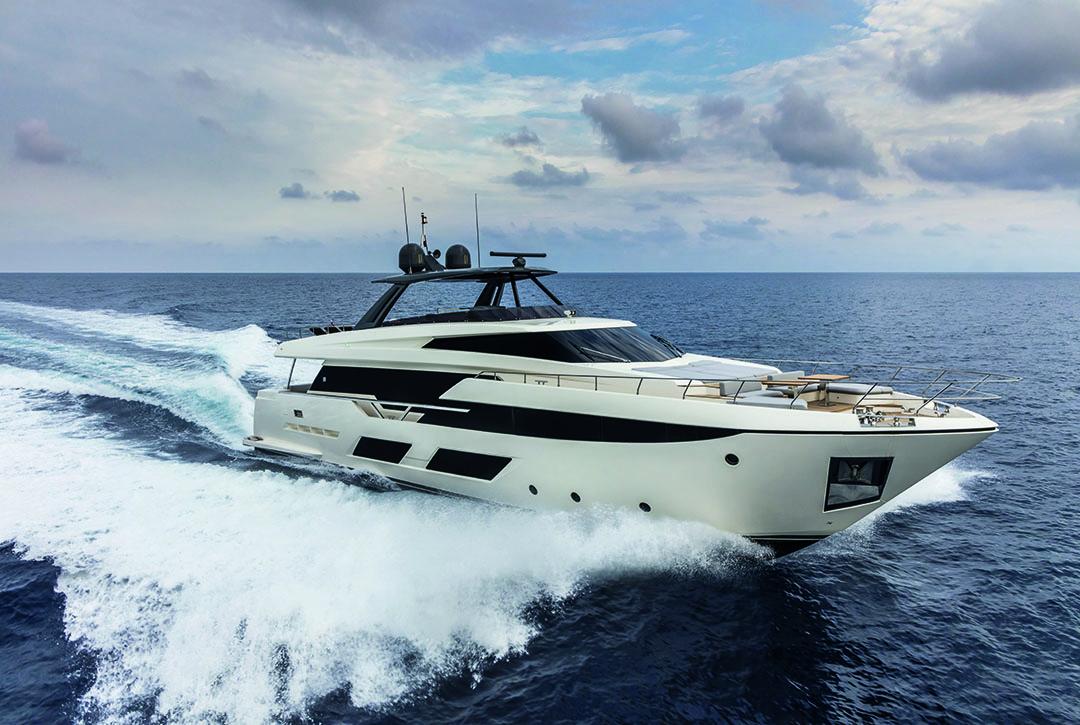 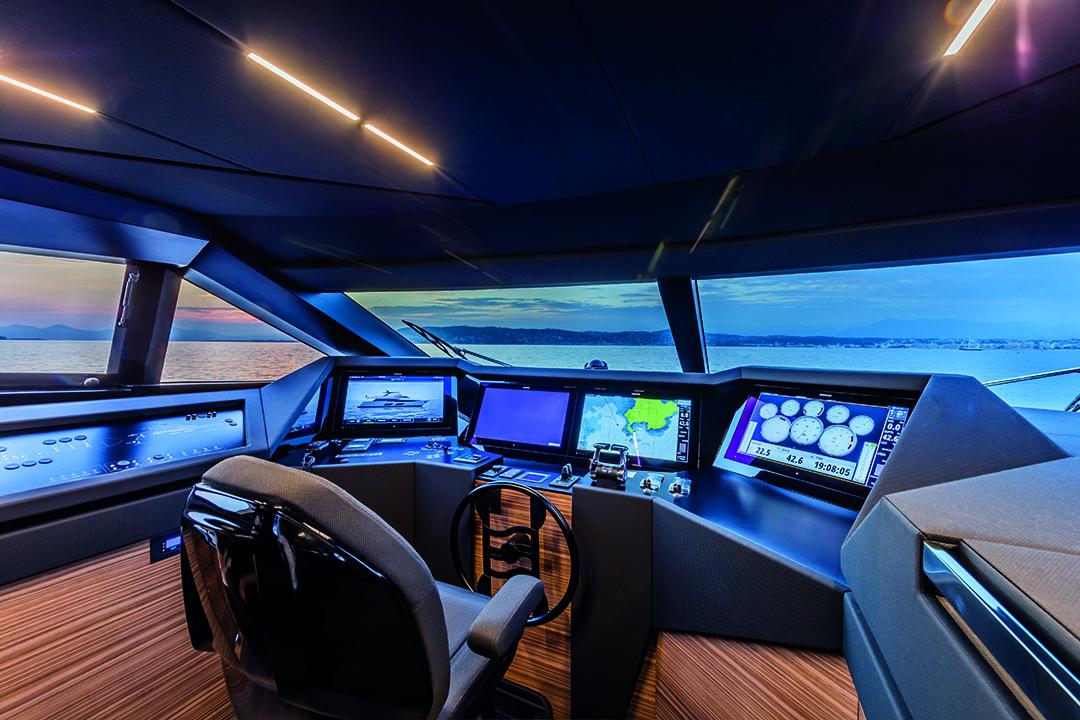 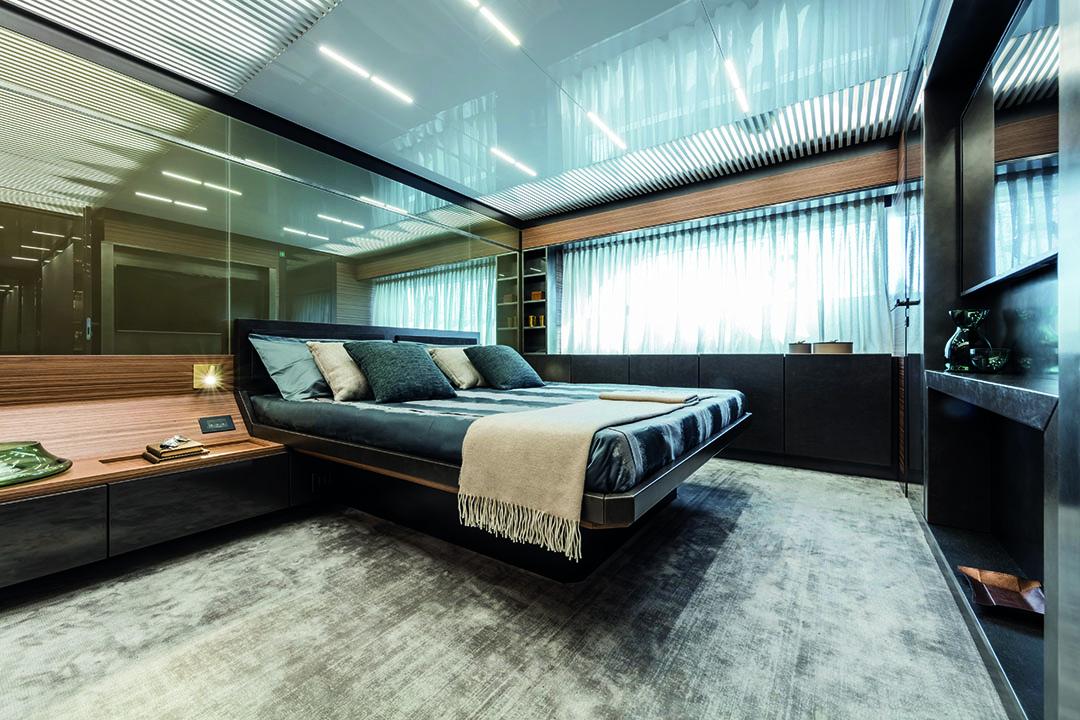