Its profile leaves no doubt: performance!

With such an explicit name and such a streamlined silhouette, the AB 100 Superfast seems designed to hit speeds rarely reached by pleasure crafts. Actually, the shipyard announces a top speed of 60 knots, no less. Fortunately, this sportfly also has for objective cruising in a very modern decor.

Flashback: in 2017, AB Yachts, then part of Fipa Group (CBI Navi & Maiora), launched its 100 foot sportfly. We actually tested it with a “reasonable” engine configuration – 2 x 2 900 hp diesels -, and reached a maximum speed of 48 knots, which was 6 knots less than expected by the shipyard, but enough to boast of her sporty character. Four years later, Next Yachts Group, which has since acquired Fipa Group, did it again with a new, even more attractive version of this AB 100. And, most of all, she comes with an even better engine configuration combining three 2 600 hp MTU 16V2000 M96L, each coupled to MJP (Marine Jet Power) waterjets. The tone is set, the new AB 100 ambitions to hit 60 knots, which will significantly reduce the time between two stopovers, at least in good weather. Unfortunately, we did not have the pleasure to “fly” above the sea at this speed, as we had to settle for a simple visit during the last Cannes Yachting Festival.

Beautiful exterior surfaces to the delight of passengers

Just like the 2017 model, the exterior design was entrusted to the shipyard’s in-house studio. It is undeniable she was redesigned to reflect even more the notion of performance. Her rocket-like profile cannot go unnoticed. The windscreen that extends laterally with smoked glass, creating a great impression, deserves perfect scores! It is accentuated by the flybridge’s white fairing that makes it even more “brilliant”. And don’t forget the metallic grey hull! This AB 100 has an undeniable power of seduction. Considering the hull side windows, plenty of light can be expected in the lower deck. But first, let’s look at the outdoors to discover the stern. It boasts the traditional teak swim platform, whose central part lifts up to allow the tender to leave its garage, provided that the transom is also raised. Once the tender launched, the platform goes back to its primary role: a beach club with a six-seat sofa. Another place of relaxation, the foredeck (30 m2) boasts a lounge (six guests) and a vast solarium. Finally, a starboard staircase goes from the cockpit to the totally uncovered flybridge of 50 m2, which only has discreet equipment: two large solariums and a dinette for six to avoid altering the AB 100’s silhouette.

Thanks to an ergonomic windows system, the cockpit of this sportfly entirely opens onto the salon. There, we immediately came to appreciate the change brought about by this new model: a rather generous supply of natural light thanks to the side windows and the windscreen. Another advantage of this design is the almost 360-degree view! We noticed this quickly as we sat on the L-shaped sofa in the living area at the entrance. There six seats comfortably, or eight with two additional armchairs. The view is just as generous from the dining area for eight. To ensure as much light as possible, the main wheelhouse, whose steering console boasts a successful modern design, is part of the decoration and perfectly blends in. Three seats with armrests complete the picture.

This Superfast boasts a spacious main deck, thanks in part to the fact that the galley is located belowdecks, at the bottom of the staircase leading there. A good chef would not disregard its professional and complete equipment… In addition to this “culinary” place, this deck also welcomes the sleeping accommodations, starting with the 35 m2 amidships master suite, where each space was cleverly thought-out. The “royal” bed, located against the planking features a desk on starboard and a hair and make-up area on port. Between the headboard and the engine room, a full beam bathroom with two washbasins and a separate shower, plus a true dressing room. There are also two twins and one double cabin, plus two crew cabins (three berths). The AB 100 Superfast can be considered as one of the most successful of all the new sportfly and if her 60 knots are confirmed, she will be a resounding success. 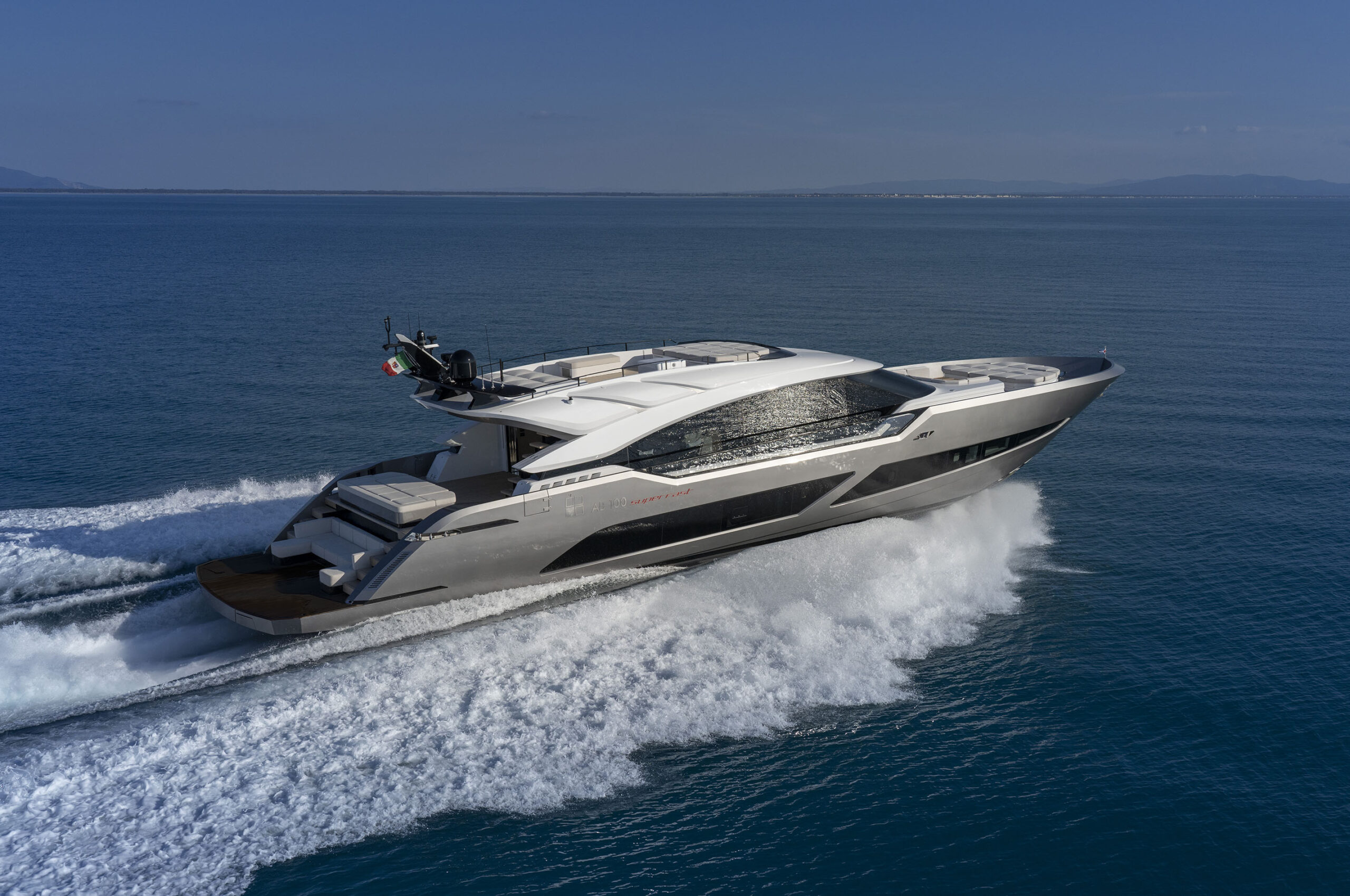 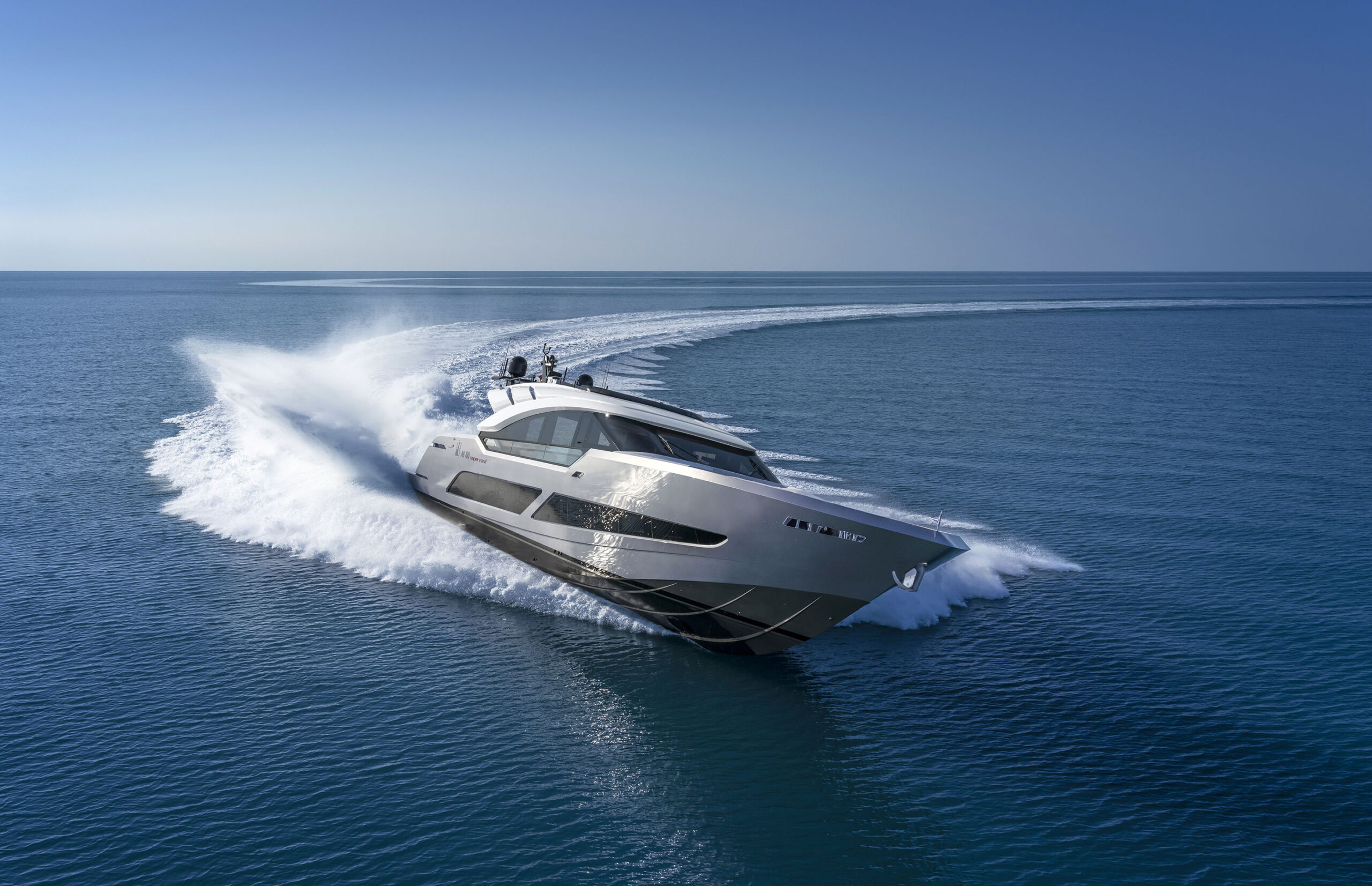 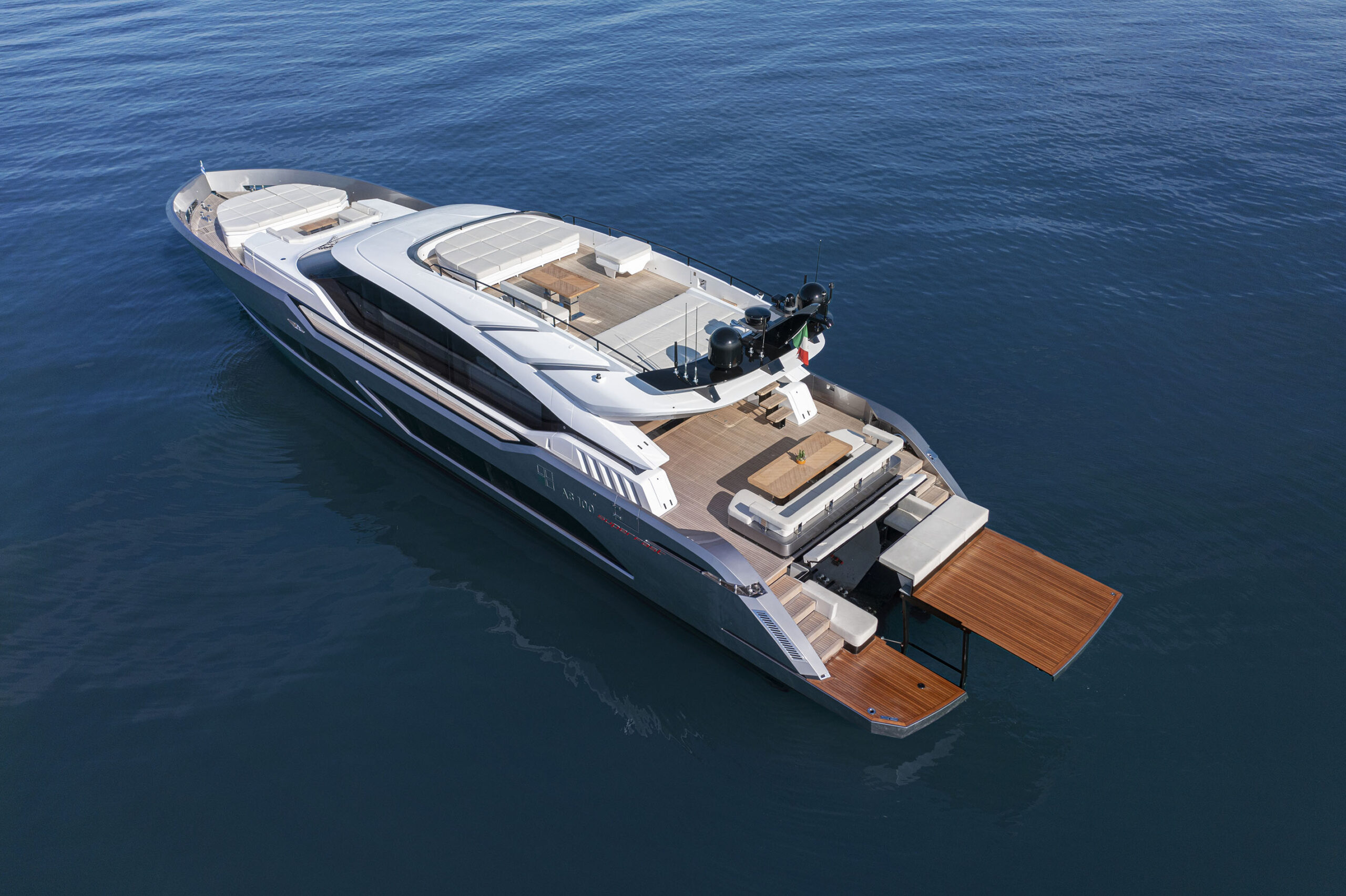 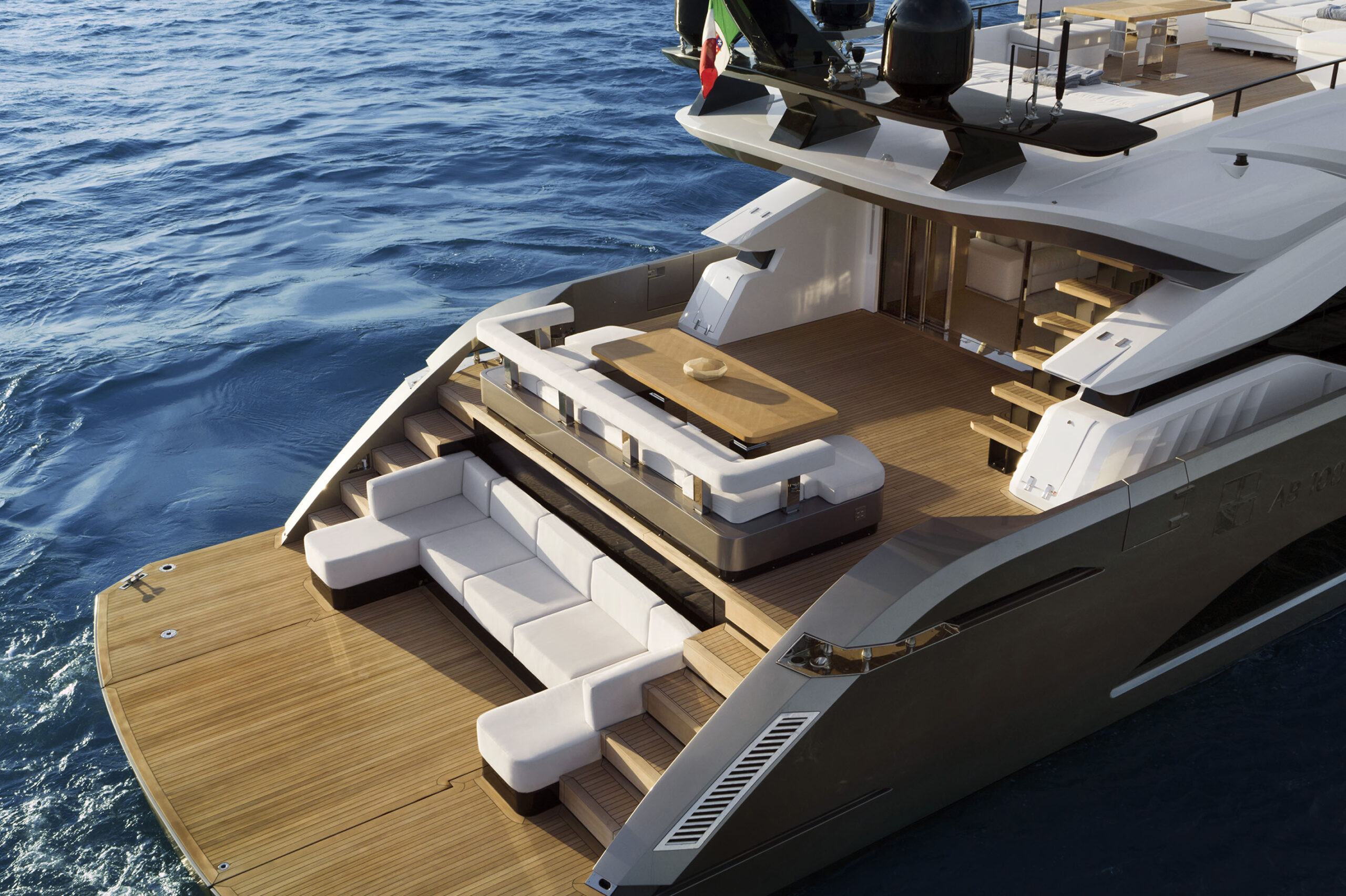 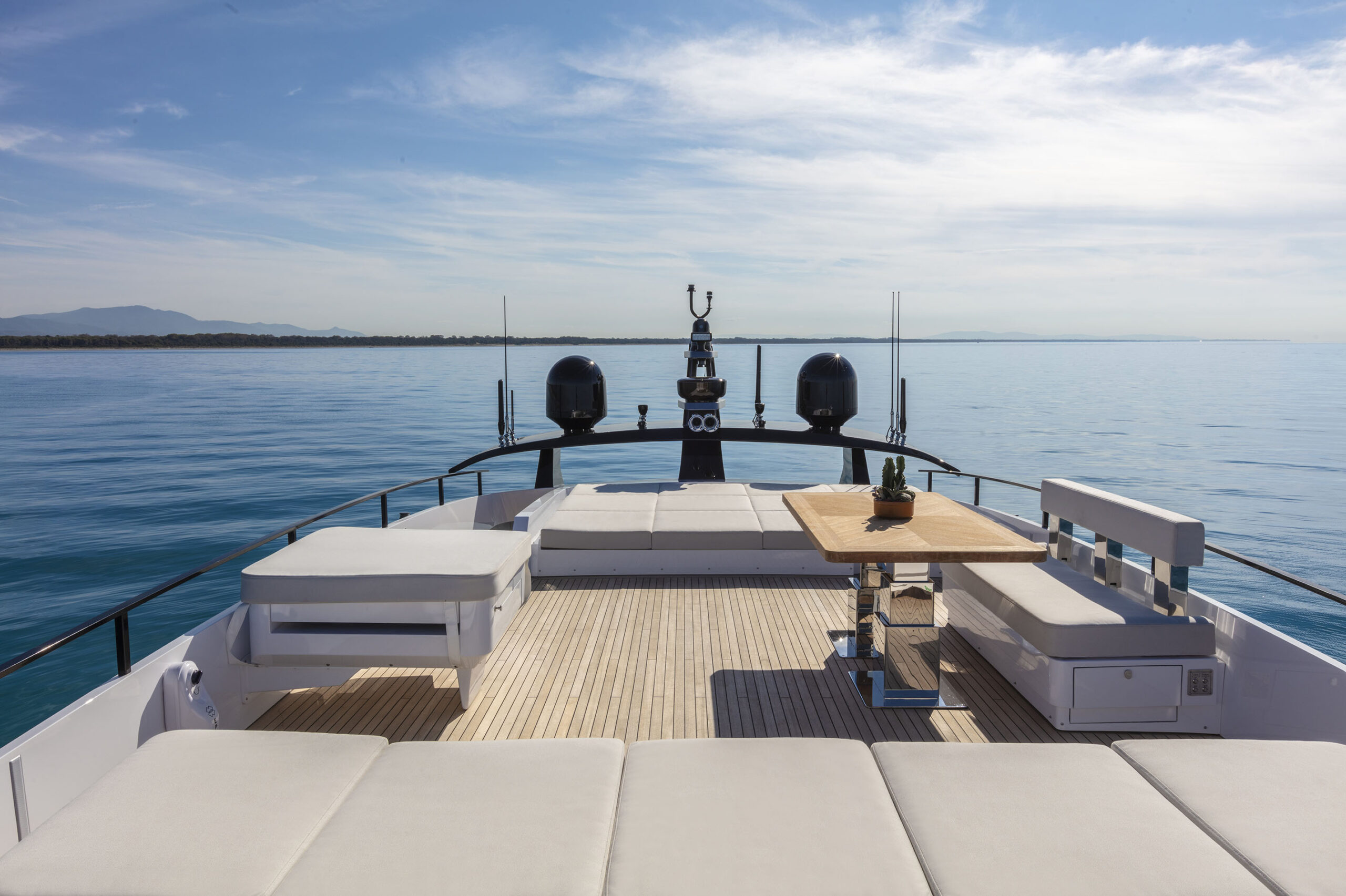 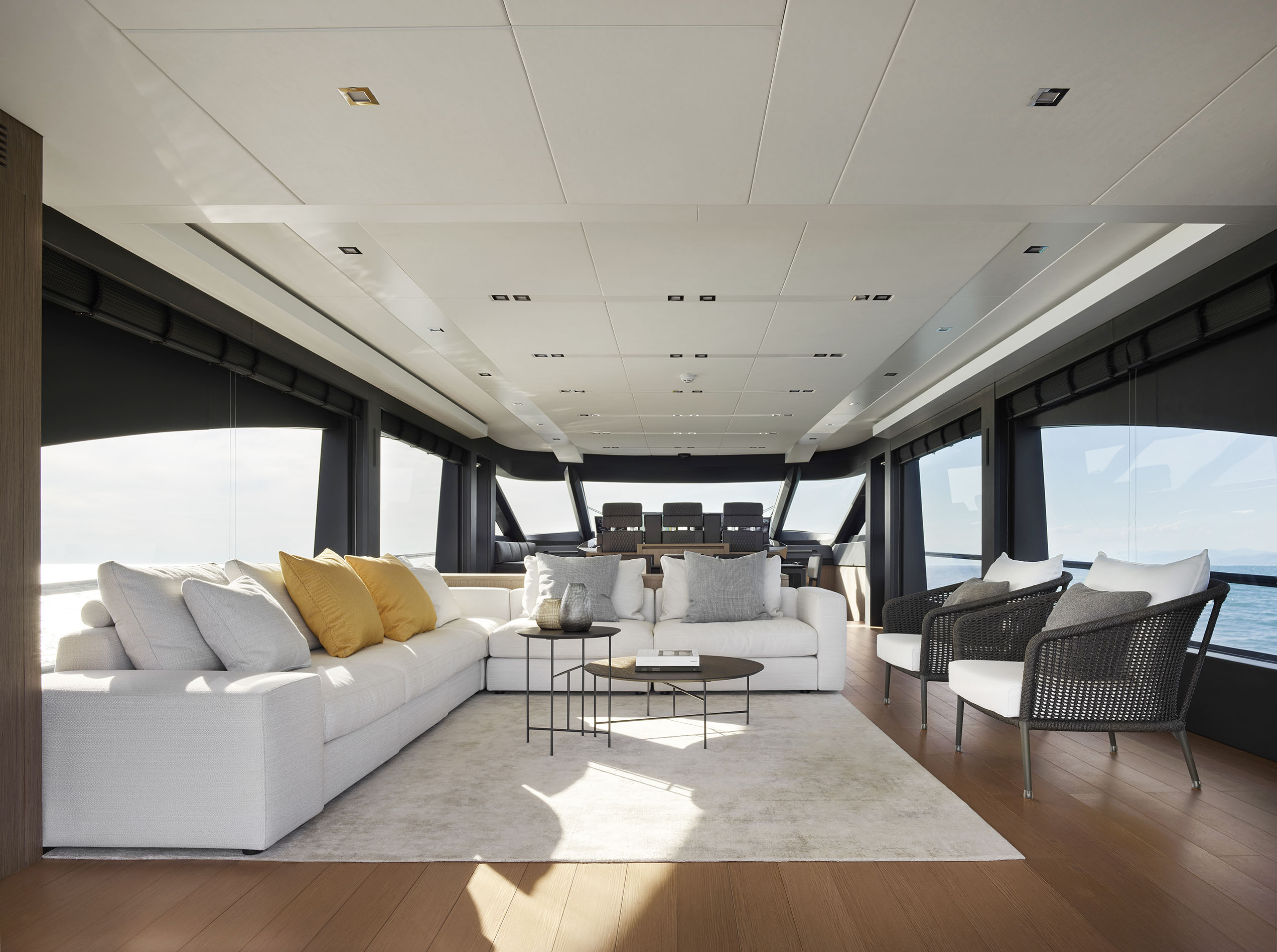 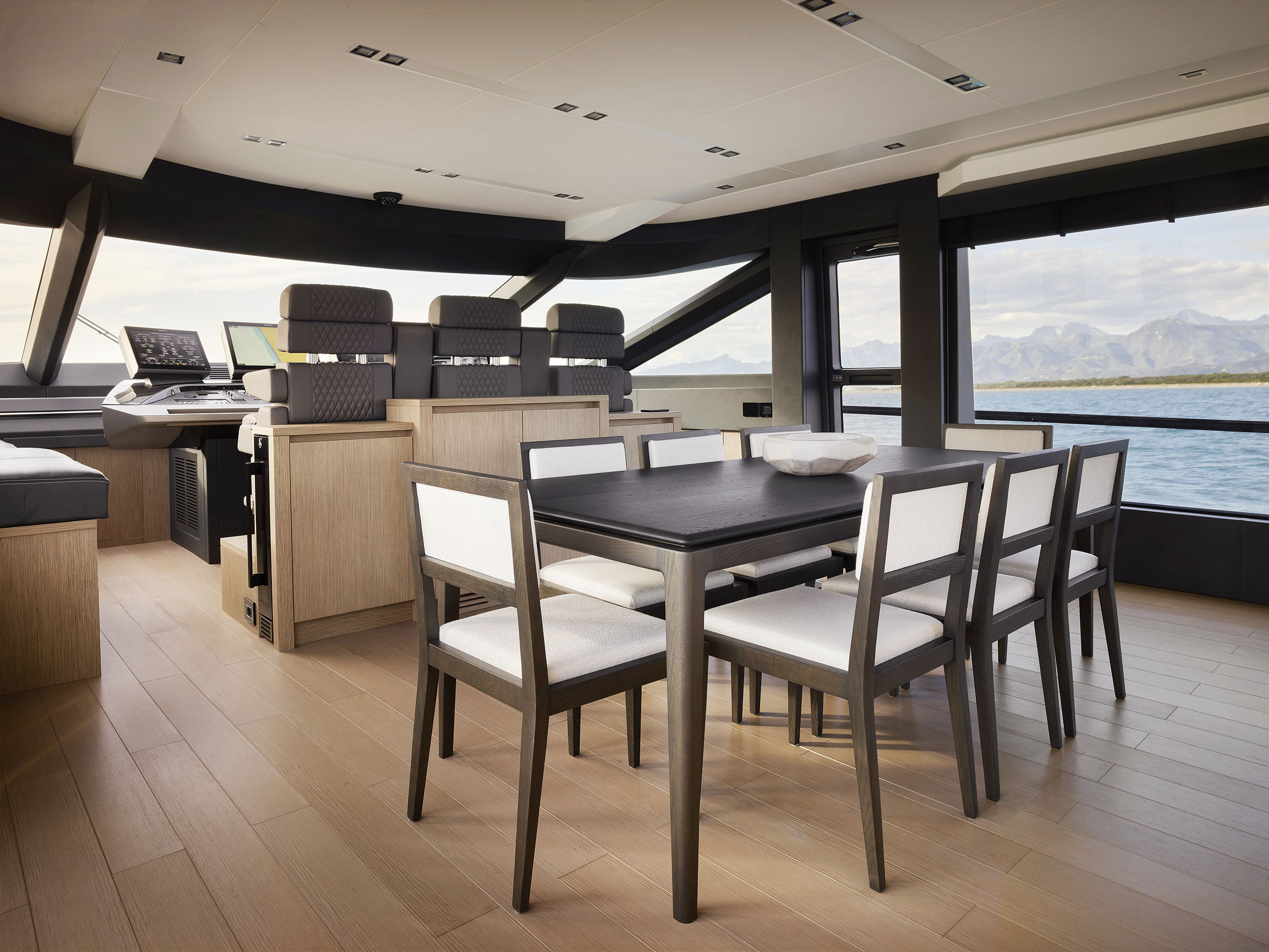 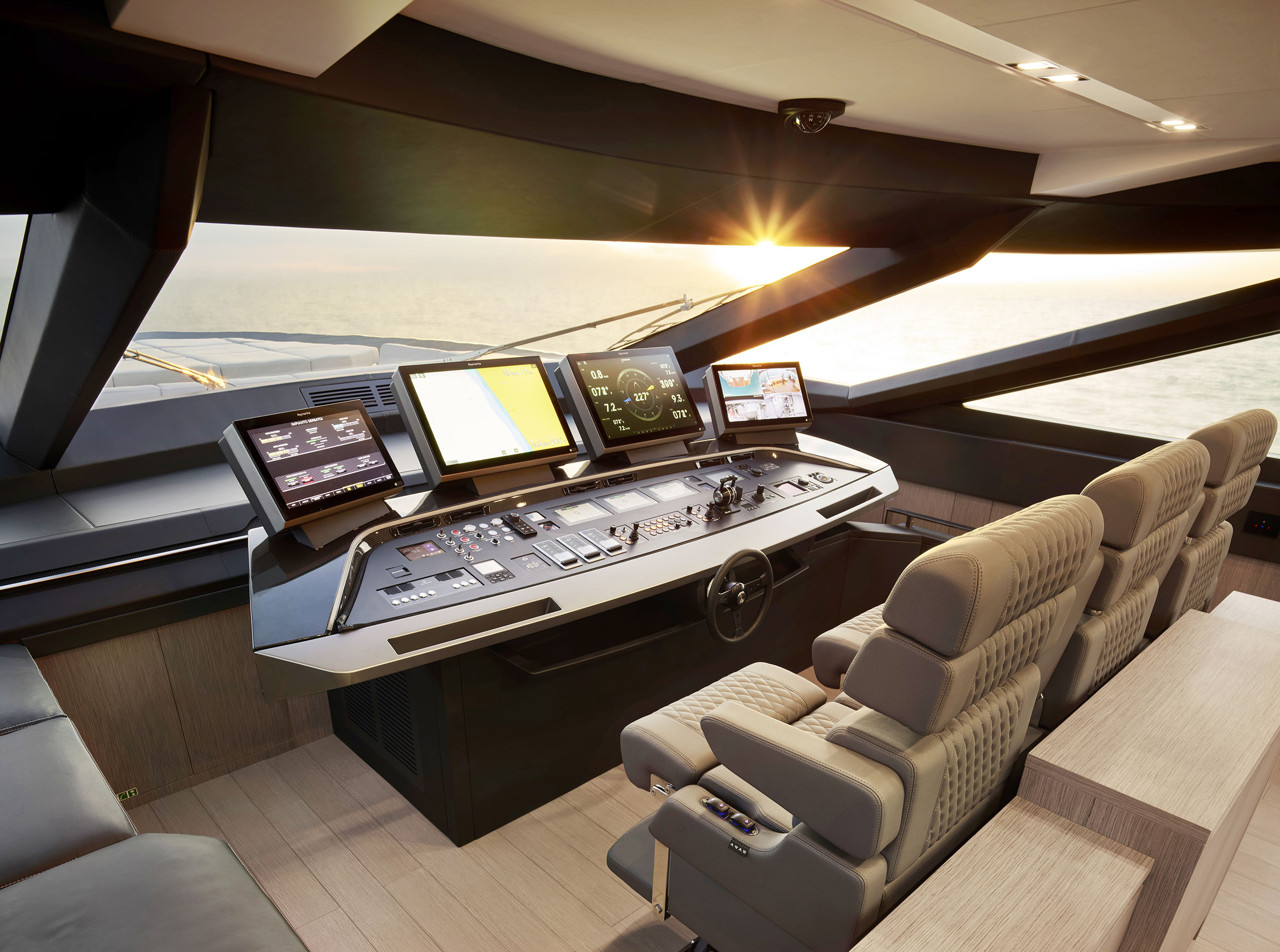 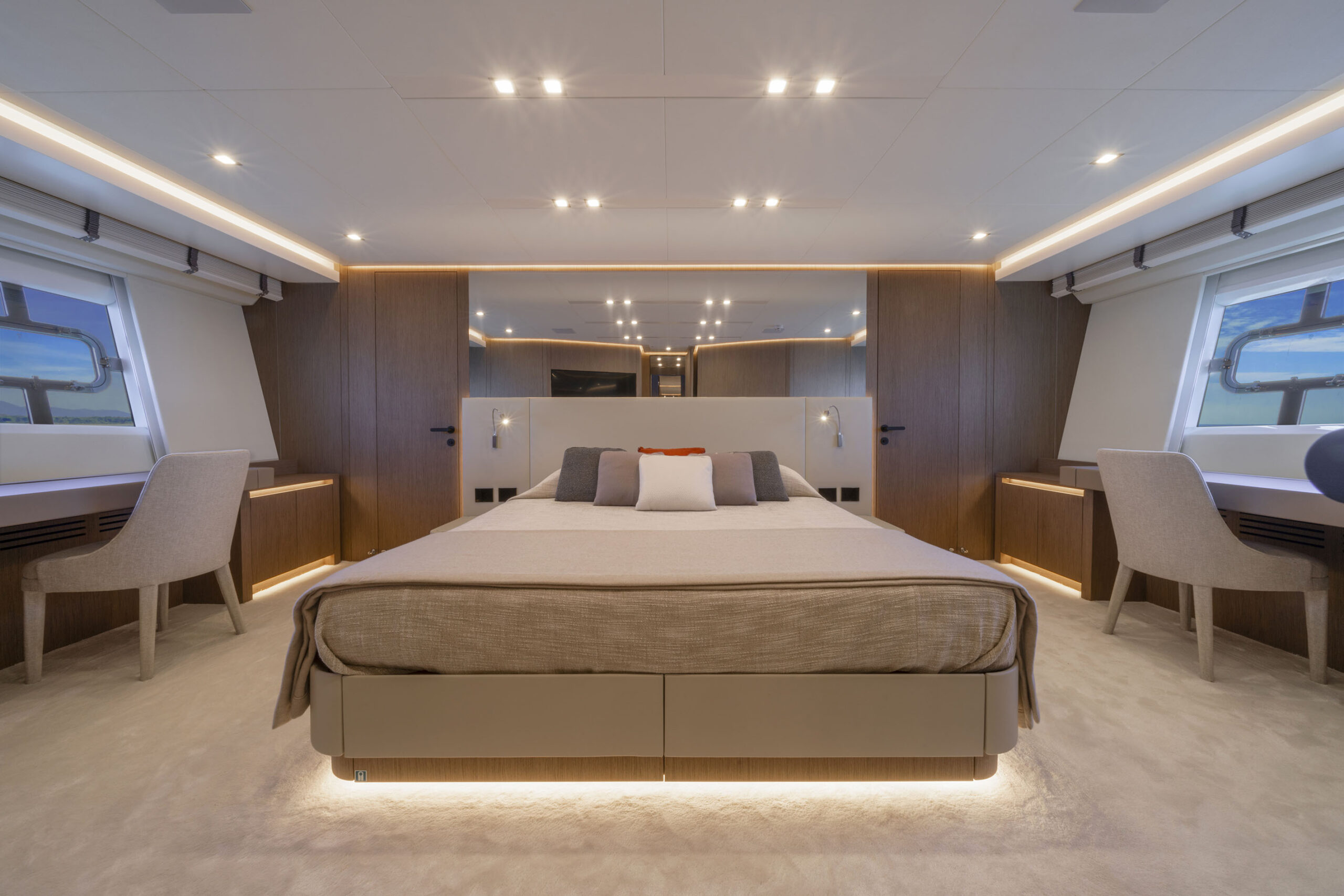 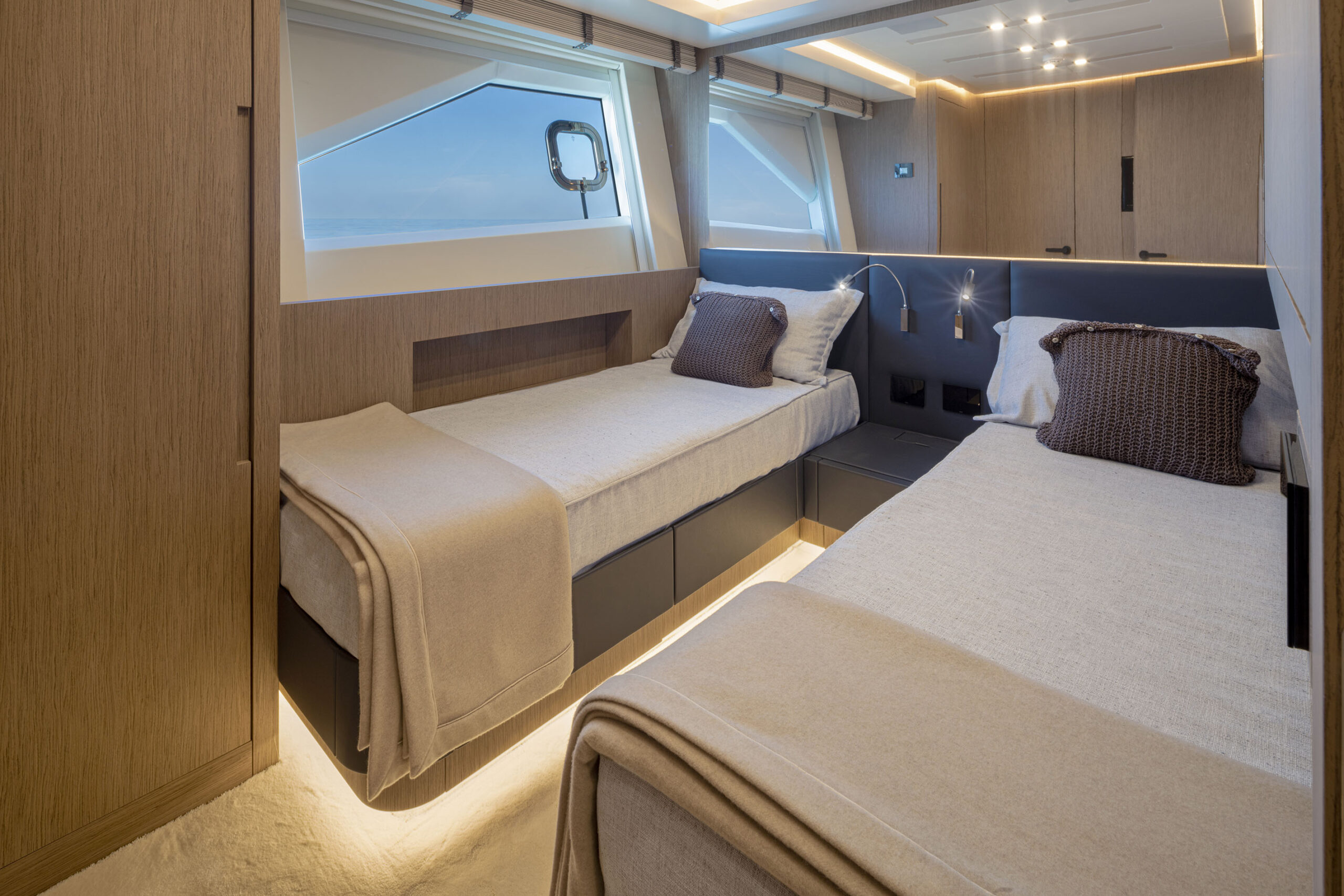